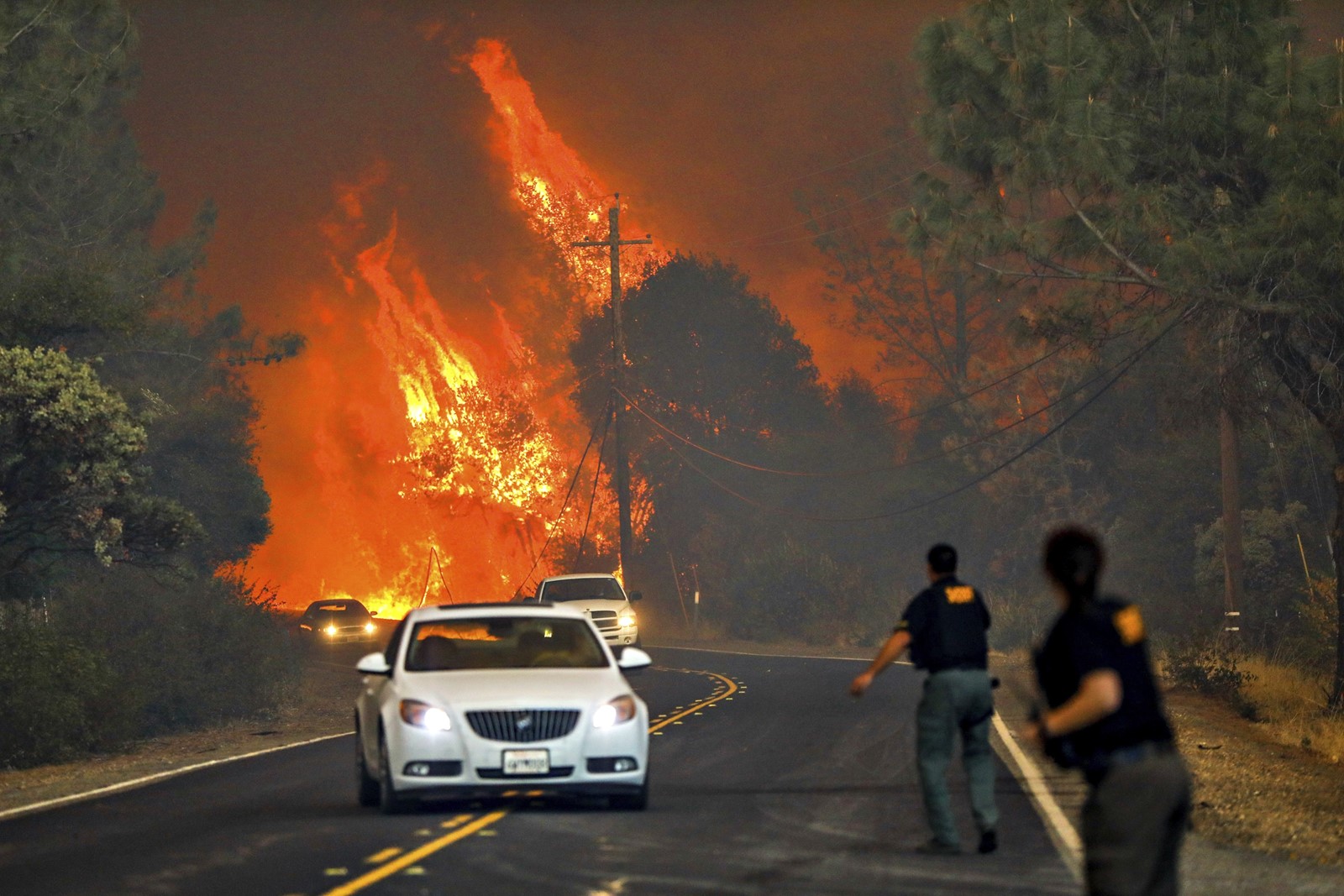 When Lilli Heart fled California’s deadliest wildfire in 2018, she was stuck in traffic for two hours outside the town of Paradise with her two cats in a car that was running low on gas.

As the septuagenarian sat behind the wheel on Neal Road — waiting helplessly while the Camp fire destroyed her two-bedroom house — she saw a huge, dark cloud in the sky. She saw firetrucks. She saw the fear in the eyes of others trying to escape.

“All I saw was a bunch of really, really scared people trying to get the hell out of there,” said Heart, 74.

What Heart did not see is this: laser beams.

That, apparently, might come as a surprise to a newly elected Republican congresswoman known for supporting the QAnon conspiracy theory, making anti- Semitic and anti-Muslim comments and falsely suggesting that school shootings in Newtown, Conn., and Parkland, Fla., were staged.

The Camp fire, which killed 85 people and destroyed more than 13,900 homes, is the latest focus of conspiracy theories spread by Rep. Marjorie Taylor Greene (R-Ga.), who speculated that the blaze might have been started by a laser beam in space. Greene made the claim in a now-deleted Facebook post that was reported this week by Media Matters for America, a liberal watchdog group.

“It’s crazy,” Heart said. “Eighty-five people died in that fire. I lost my whole life of collections, artworks, things that I worked for my whole life. For someone to make light of it like that — it really hurts.”

In the meandering November 2018 Facebook post, Greene theorized that a space-based solar generator, used in a clean-energy experiment with the goal of replacing coal and oil, could have beamed the sun’s energy back to Earth and started the fire.

“There are all these people,” she wrote, “who have said they saw what looked like lasers or blue beams of light causing the fires ... If they are beaming the suns [sic] energy back to Earth, I’m sure they wouldn’t ever miss a transmitter receiving station right??!! ... Could that cause a fire? Hmmm, I don’t know.”

California wildfires have been fodder for conspiracy theorists for years, but Greene’s comments surface at a time when a sizable segment of the American population — from armed people in Oregon on the lookout for so-called antifa members starting blazes to the mob that attacked the U.S. Capitol based on former President Trump’s baseless claims of a rigged election — is treating false conjecture as fact.

Republican leaders have faced increasing pressure over their handling of Greene, who was assigned this month to the House Education and Labor Committee. A representative for House Minority Leader Kevin McCarthy (R-Bakersfield) did not respond to requests for comment.

In response to a question from The Times about Greene’s theory about the Camp fire, a spokesperson for Rep. Doug LaMalfa (R-Richvale), who represents Paradise, wrote: “Congressman LaMalfa believes that poor forest management practices advocated by misguided environmentalists have caused dangerous fuel loads and increasingly severe Western wildfires. He has led the conversation in Congress for reform and next month will introduce a wide-ranging package of bills to prevent future wildfires and minimize wildfire risk.” He did not address Greene’s comments.

Greene put out a statement Friday addressed to “the radical, left-wing Democrat mob and the Fake News media trying to take me out.”

Greene’s comments have incensed people who lived through tragedies she has speculated about.

Fred Guttenberg, whose 14-year-old daughter Jaime was fatally shot along with 16 other people at Marjory Stoneman Douglas High School in Parkland, Fla., in 2018, was scrolling through Twitter on Thursday night when he saw the phrase “Jewish space laser” trending. When Guttenberg, who is Jewish, realized it was about Greene’s post, he was disgusted.

“She denies that my daughter died in Parkland ... and yet, because my last name is Guttenberg, because I am Jewish, she thinks I shoot lasers at forests and start fires,” Guttenberg told The Times. “You can’t make this up.”

Guttenberg said he holds McCarthy and other GOP leaders responsible and said they “need to take her at her word and do something before someone gets hurt.” He said he found no humor in Greene’s speculation about the Camp fire.

“There are a lot of people who are willing to believe these things,” he said. “They use a universe of alternative facts to justify engaging in violence. ... It can’t be allowed to continue.”

The Camp fire was sparked by PG&E electrical equipment, some of which was nearly 100 years old. The company pleaded guilty to 84 counts of involuntary manslaughter last June.

“If a ‘Jewish laser’ was able to accurately target the rusted-out, 100-year-old transmission tower that caused the fire, what a good shot they were. It was a hell of a good shot,” Lee Houskeeper, a media consultant for a law firm that represented scores of Camp fire victims in lawsuits against PG&E, told The Times sarcastically.

Skepticism toward government messaging isn’t new, and knocking down rumors has always been part of the job for crisis communicators. But in the age of social media, false information spreads like, well, wildfire, and can be dangerous in real time when officials need to quickly share facts about fast-moving crises.

“The one challenging aspect all fire departments, all government entities, face is the information we post is verified and … there are times the general public is able to post something online that gets traction just based on their perception of what’s happening,” said Nick Schuler, a deputy fire chief with the California Department of Forestry and Fire Protection.

“If I were down at the beach today and posted ‘Hey, a giant wave took out the sea wall,’ you’d have several people resharing that information, posting it, probably before the city would be able to say ‘No, that’s not correct.’ ”

Schuler recalled getting a flurry of media inquiries in 2017 when people began to wrongly connect a massive solar flare with wildfires in San Diego.

Last year, firefighting crews in Oregon encountered groups of people who were convinced that wildfires burning there were started by antifa. The people were stopping residents from moving on local roads and, in at least one case, prohibited firefighters from going onto their property to help set up a defensive position for oncoming flames.

When fires are extreme or wind-driven, their burn patterns can seem completely illogical to the uninitiated, and thus ripe for conspiracy speculation as people try to make sense of what happened, said Jack Cohen, a wildfire expert and retired U.S. Forest Service firefighter.

The Carr fire that burned in Shasta and Trinity counties in Northern California in 2018 seemed to char every inch of forest in some areas, but one or two homes would survive. During the Camp fire later that year, much of the forest remained intact, but homes tucked within the trees were destroyed.

Cohen said he first started hearing conspiracy theories about space-based directed-energy weapons after high-definition drone images showed the Camp fire’s pattern of destruction. He said people are “obscenely obsessed” with what causes wildfires and fill in the blanks when they can’t explain them.

While people are impressed by high-intensity big flames, he said, the reality is that many homes and structures are destroyed more slowly during wildfires by burning embers and low-intensity surface fires that linger in vegetation.

Steve Crowder, the mayor of Paradise, said he is more focused on rebuilding than on listening to theories about space lasers.

“People are definitely still suffering, and there are people who will never get over it,” he said. “I don’t think statements like that make a whole lot of difference one way or another. I don’t take it too seriously.”

Crowder said the town has already rebuilt 600 buildings and that PG&E is putting power lines underground throughout Paradise. Eventually, he said, Paradise will be more advanced than many other municipalities in terms of fire safety and communications.

“Don’t waste your time on the myths,” he advised.

Anastasia and Daniel Skinner laughed when they heard Greene’s theory.

In early 2019, the couple were living in an RV on their scorched property. Money was tight as they paid for water, propane, gas and other necessities for their five young children — costs that amounted to more than their monthly mortgage for the home the fire destroyed. Then the RV was stolen. Another property the couple owns in the area was being foreclosed. They had hoped settlement money from PG&E would help save that home, but they haven’t seen a dime.

To hear a politician from another state spreading rumors about the fire that upended their lives is “silly” and “annoying,” Anastasia said.

“There’s no way to prove lasers from space would have caused the fire,” Daniel said. “But she’s getting a lot of attention.”

Meanwhile, he said, victims and people who help families like his don’t get enough of it.