Trump not buying report on FBI

He rejects conclusion that the agency wasn’t biased in the Clinton email investigation. 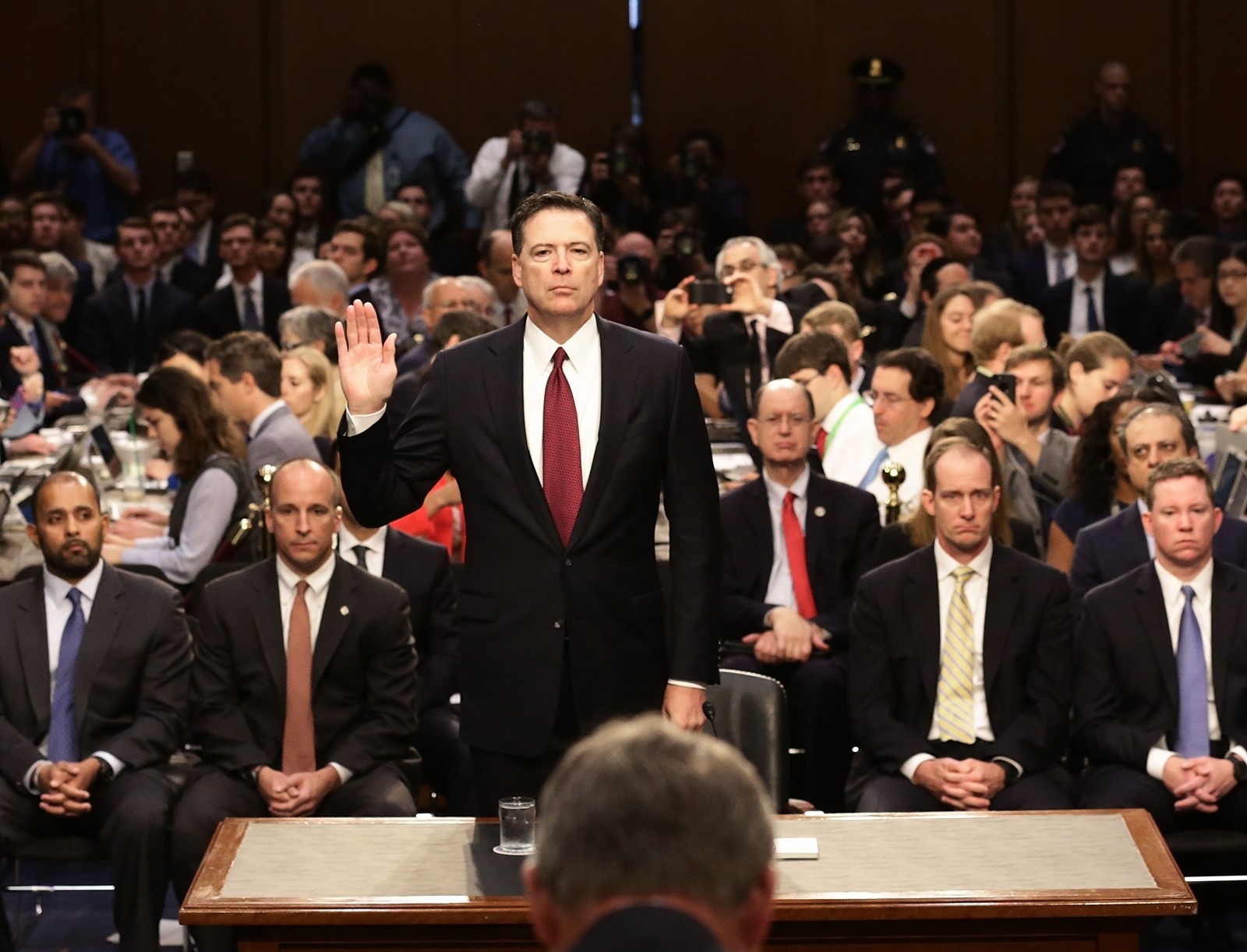 JAMES B. COMEY testifies in the Senate in 2017. “What he did was horrible,” President Trump said of Comey’s actions in the Hillary Clinton email inquiry. (Mark Wilson Getty Images)
PREVIOUS IMAGE

President Trump on Friday rejected the conclusion of the new report by the Justice Department’s inspector general, which found that mistakes FBI leaders made in investigating Hillary Clinton’s private emails during the 2016 campaign were not the result of any bias, including on the part of former Director James B. Comey.

“The end result was wrong. There was total bias,” Trump said during a live interview on “Fox & Friends” from the White House North Lawn. “It was a pretty good report, and then I say that the IG blew it at the very end with that statement.”

Despite that, Trump falsely claimed the report released on Thursday “totally exonerates” him. Yet it has nothing to do with the inquiry in which Trump is implicated, involving allegations that Russia interfered in the campaign to hurt Clinton, the Democratic presidential nominee, and that Trump associates might have been complicit. Those allegations, along with suggestions that Trump sought to obstruct justice in the inquiry, are the subject of the separate, ongoing investigation of special counsel Robert S. Mueller III.

The president made a variety of other assertions, a number of them false or misleading, in the Fox interview and then in remarks to other reporters on the White House driveway. Reporters repeatedly challenged his statements, twice asking the president why he was “lying.”

Asked whether he would fire Scott Pruitt, his scandal-tarred director of the Environmental Protection Agency, Trump praised Pruitt yet declined to rule out a sacking. “I’m not happy about certain things, I’ll be honest,” he said.

His main subject, however, was the report on the FBI’s Clinton investigation, specifically its passages critical of Comey and agents Trump has considered his nemeses. The president claimed that he would win a poll of current FBI rank-and file officers, but he referred to the FBI leadership during the 2016 election as “a den of thieves” as it managed investigations into both campaigns.

He specifically referred to the text messages between agents Peter Strzok and Lisa Page, in which they expressed angst about Trump’s election and vowed, in one text, to “stop it.”

Strzok’s actions, the president said, were “criminal.” He added, “I don’t know how Peter Strzok is still working there.” Mueller removed Strzok from the Russia investigation last year, when their communications first became public, and Page has left the FBI.

Asked whether Comey should be “locked up,” Trump demurred, saying he wouldn’t want to “get involved in that.” Yet he went on to say, contrary to the inspector general’s findings, that Comey committed criminal acts. “What he did was horrible,” the president said.

Trump said that FBI Director Christopher A. Wray, whom he nominated to lead the bureau after firing Comey a year ago, is reforming the agency, but he suggested that the perceived bias among some agents would continue. As he has before, Trump portrayed the Mueller investigation as the work of “13 angry Democrats,” though Mueller is a Republican, as is Deputy Atty. Gen. Rod Rosenstein, a Trump appointee who named Mueller and oversees his team’s work.

Trump, reminded by Fox’s Steve Doocy that he oversees the Justice Department and has the power to make changes, said that he has tried to “stay uninvolved.” Senior Republicans have warned that Trump’s firing of Mueller or Rosenstein could provoke a crisis, and the threat of impeachment.

He added: “I may get involved at some point, but I’m staying uninvolved.”

The Fox interview was not on Trump’s schedule — he had no public events scheduled for a third day since he returned from his summit with North Korea’s Kim Jong Un — but the president tweeted teasingly on Friday morning that he might wander out to the lawn because a Fox crew was there. Other reporters swarmed as he made his way to the Fox camera, where he engaged in a wide-ranging interview of more than 30 minutes, until the show ended at 9 a.m.

As he walked back to the White House, Trump answered questions for 20 more minutes from reporters who circled him. Asked whether he would suspend the Mueller investigation — as attorney Rudolph W. Giuliani suggested the Justice Department should do — Trump said “no,” but repeated his claims of bias among the investigators.

Trump also expressed empathy, as he has before, for Michael Flynn, his former national security advisor, and former campaign chairman Paul Manafort, saying their lives have been upended by the special counsel’s investigation. Trump spoke just as Manafort was about to be sent to jail on Friday, after a federal judge revoked his bail on separate charges based on new allegations of witness tampering.

Seeking to distance himself from Manafort, the president claimed again that the man who headed his campaign for months in 2016, including during his nomination at the Republican National Convention, “had nothing to do with my campaign.” He said he hadn’t spoken to Michael Cohen, his longtime personal lawyer and self-described “fixer,” who is said to be considering cooperating with prosecutors in New York, “in a long time.”

Trump defended his administration’s policy of separating parents who cross the border illegally from their children, including infants, something previous administrations opted not to do.

“That’s the law and that’s what the Democrats gave us,” Trump said, falsely blaming the opposition party for his administration’s policy announced this spring. Trump, who is still trying to force the Republican-controlled Congress to provide $25 billion for a border wall, said Democrats wouldn’t negotiate because they were “afraid of security for our country.”

To the surprise of House Republicans, the president said he would not support an immigration proposal that Speaker Paul D. Ryan negotiated with moderate and conservative Republicans. The president’s remark scrambled Republican leaders’ plans for House votes Friday on that measure and a second, more hard-line bill, even as Trump called on Congress to send him legislation. The White House later tried to walk back Trump’s statement.