Expecting a big tax refund? You may be disappointed

Many filers who didn’t change their W-4 withholdings could get less back, or even end up owing money. 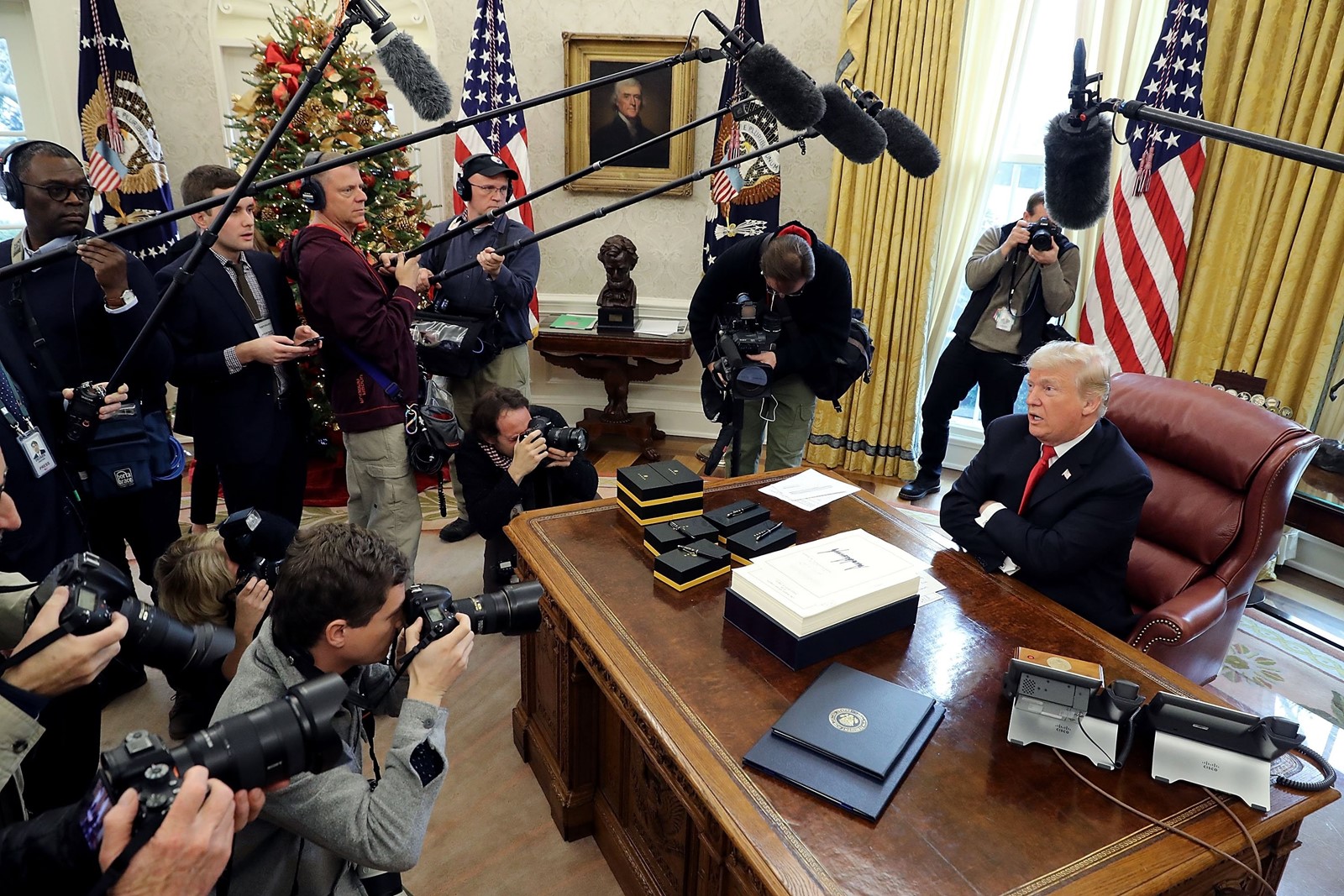 FILERS who didn’t adjust their W-4s may have taken home more in 2018 but now won’t get the refund they expected. Above, President Trump after signing the law. (Chip Somodevilla Getty Images)
PREVIOUS IMAGE

Doing your taxes isn’t just about placing the correct numbers in the boxes of a form and then, as many hope, collecting a refund. There’s also how you about your taxes.

“People are really happy when they get a big refund,” she said. “Or they’re either sad or distressed or confused if they’re not getting the refund they were hoping for — or end up owing.”

And this year many Americans are expected to be less than happy because of last year’s sweeping federal tax overhaul, which has Block and the rest of the tax-preparation industry bracing for plenty of sour reactions now that tax filing season is about to start ahead of the April 15 deadline. They’re doing things such as extra customer education, employee training and even role-playing exercises to prepare for the financial mood swings ahead.

The tax overhaul represented the biggest change in the U.S. tax code since 1986, altering the tax situation for many of the 154 million people expected to file individual federal returns this year with the Internal Revenue Service.

The latest redo, among other things, lowered tax rates for many individual income levels and raised the standard deduction. But it also eliminated many deductions that people had itemized to lower their tax burden — such as union dues and the fees that tax preparers charge — and it placed caps on others, such as state and local income tax deductions.

The upshot: While some filers will owe less or get a larger-than-expected refund, many others will be in the opposite camp, especially if they did not adjust their W-4 form that determines how much of their weekly income is withheld for taxes.

In other words, people who did not change their withholding might have enjoyed more take-home pay during 2018 but now they won’t get the refund they might have expected. Uncle Sam in effect gave them more money throughout the year instead of waiting to return the cash with a refund. That refund averaged about $2,800 for the majority of individual taxpayers last year, the IRS says, but that’s likely to change for 2018 returns.

Jackson Hewitt Tax Service Inc., a tax-preparation firm with nearly 6,000 U.S. offices and 20,000 preparers, said it took a recent survey that found that 72% of respondents had not updated their paycheck withholding since the tax revamp took effect, “meaning that taxpayers or their employers’ payroll systems could be using incorrect numbers.”

“Taxpayers have heard they may see more money as a result of the tax law changes, but more money doesn’t necessarily mean in their tax refund,” said Lisa Greene-Lewis, a tax expert at TurboTax, the unit of Intuit Inc. that makes do-it-yourself tax software used by more than 36 million filers. “They may have seen it throughout the year in their paychecks because the tax rates were lowered.”

That’s why the IRS and the tax-preparation industry has been trying for the last several months to persuade people to adjust their W-4s if necessary, using calculators that incorporate the tax changes. (The IRS calculator is at: .)

Further clouding matters was the federal government’s partial shutdown, which initially left the IRS with a skeletal staff. The Trump administration said it would call about 36,100 additional IRS employees back to work — without pay — so that on Jan. 28 the agency could start processing returns and issuing refunds.

But with a deal reached Friday to end the shutdown, that cloud was lifted.

There’s also this wrinkle: Although the tax changes were partly intended to simplify filings of federal taxes — for instance, many people who had itemized are now expected to use the standard deduction — the same can’t be said for state income tax rules.

“It’s going to cause enormous problems this year because the states are in a much different position,” which could result in some taxpayers taking the standard deduction on their federal return and itemizing on their state return, said Mark Steber, Jackson Hewitt’s chief tax officer.

Tax rules in California and other states “were not a piggyback onto the federal” changes, he said.

The tax-preparation firms know that some customers tend to blame them, and not new tax laws, when the filers don’t get the refund they expect or end up with a larger tax-due balance than anticipated. That can send miffed clients away and cut into the preparers’ revenue.

“We have had to do a lot of work to prepare our tax preparers for that actual conversation,” in addition to the massive job of training preparers and rewriting tax-preparation software, Pickering said. “It has been all hands on deck ever since the law got passed.”

“For many people, the filing event is the largest financial transaction of the year, and they really look forward to getting a refund,” Pickering said. “It’s what they use to pay bills, catch up on late bills or pay off their holiday expenses, for example.

That’s one reason why Jackson Hewitt’s training has included role-play exercises, so that preparers can correctly respond to clients’ gripes, Steber said.

“Maybe their overall tax liability actually is lower, but they got their money during the year” with more money in their paycheck, Steber said. “But because their refund is $1,000 less, they had an unhappy client experience.”

To avoid that problem, the IRS for months has been urging taxpayers to check their withholding to adapt to the changes, and the agency will keep beating that drum.

Gerard Cannito, president of the National Assn. of Tax Professionals, noted that “a lot of tax preparers weren’t even in the business in 1986,” when the last major tax overhaul occurred and will face a big test when they meet with clients this year. “They have not gone through something as wide-sweeping as this.”

Taxpayers “see us after the year is over and everything has transpired, and then they want us to wave a magic wand and fix it all,” Cannito said. “There’s not a whole lot we can fix once the year is over.”