Will budget deal cause economy to overheat?

The plan would add stimulus—and debt— when business already is humming. Inflation, interest rates may rise. 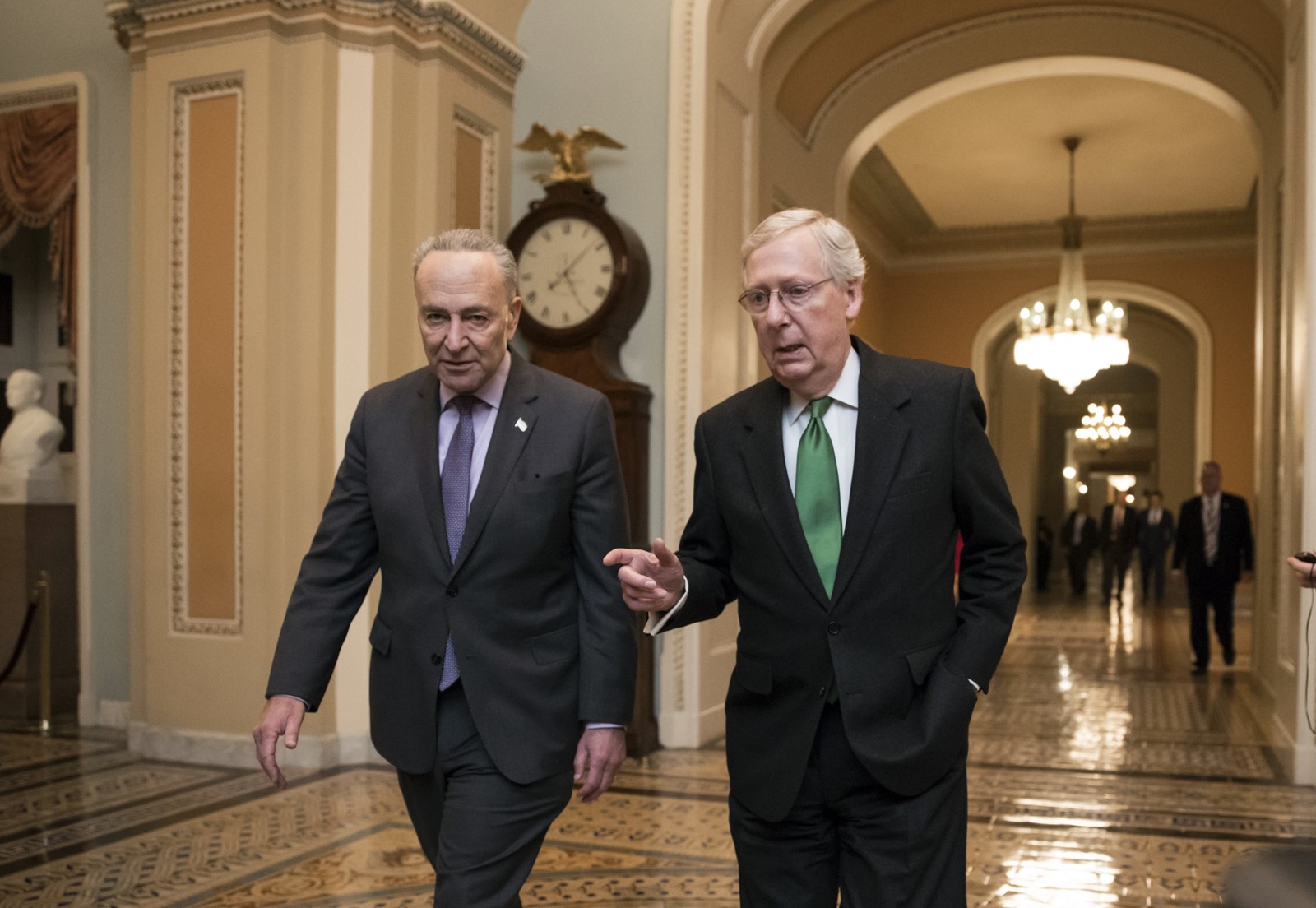 If the GOP’s $1.5-trillion tax-cut package powers the American economy like rocket fuel as President Trump predicts, the new congressional budget deal could become the extra boost that causes the engine to overheat.

The budget compromise that was struggling late Thursday to win passage provided a bipartisan answer to the latest fiscal crisis. But lawmakers did so by raising spending caps on military and non-defense programs that will add $300 billion to $400 billion to the deficit.

Coming on top of the tax cuts passed late last year, the increased spending caps — plus tens of billions of additional dollars for disaster relief — will throw more fuel to an economy that is already perking up.

Analysts say that raises the odds of higher inflation and interest rates, precisely the concerns that in recent days have stoked investor fears and stock market volatility, which continued Thursday with a second 1,000-point drop in the Dow this week.

The budget deal also means that the United States probably will be returning to trillion-dollar annual deficits next year — much sooner than expected and under a government controlled by Republicans, who traditionally had identified themselves as the party of fiscal probity.

When Trump took office about a year ago, the Congressional Budget Office projected that the nation’s deficit would run between $500 billion and $700 billion annually for a few years, not breaching $1 trillion until 2022.

With lower tax revenues expected and now additional spending and an accompanying agreement to lift the debt ceiling, some experts reckon the deficit will blow past $1 trillion in fiscal 2019 and keep rising from there.

“This deal shows we’re in a permanent era of trillion-dollar deficits,” said Marc Goldwein, senior policy director at the Committee for a Responsible Federal Budget, a nonpartisan advocacy group. While spending caps were lifted by about $150 billion each for this year and next, Goldwein says it’s almost certain that the higher limits will become the new baseline.

“There’s no way Congress is going to let spending fall $150 billion in appropriations,” he said.

Treasury Secretary Steven T. Mnuchin has said that the president is very concerned about the increasing debt. And on Thursday, Deputy Press Secretary Raj Shah said the budget the White House plans to release Monday will show a “path” toward declining deficits. “Economic growth is essential to cutting deficits,” he said. “We are committed to fiscal discipline.”

The CBO has not yet updated its long-term budget forecast to reflect the tax cuts and new fiscal budget. But even before those changes, the U.S. national debt, as a share of the economy, had reached the highest level since World War II and was projected to keep climbing largely because of an aging population and growing expenses for health and retirement programs.

The U.S. debt held by the public, including foreign investors, is currently about $15 trillion.

“We’ve already entered a period where we have these structural deficits, and to answer that with a new round of tax cuts that are unpaid for, and a new round of spending that’s unpaid for, is just adding insult to injury,” said Michael A. Peterson, president and chief executive of the Peter G. Peterson Foundation, a nonpartisan organization focused on the country’s fiscal challenges.

“What you’re seeing is complacency and a lack of leadership and lack of courage to address these important problems,” he said.

While members of both parties seemed to largely shrug at the huge spending increase, some Republican lawmakers balked at the budget deal, calling it fiscally irresponsible. House Speaker Paul D. Ryan (R-Wis.) noted the ramped-up spending for the miliary that his GOP members sought.

About $165 billion of the additional spending would go to the Pentagon in the two-year deal, and about $130 billion to non-defense programs.

The 2011 spending caps were meant to impose fiscal restraint on Washington. The Great Recession severely shrank government revenues, and spending surged in 2009 as President Obama and Congress responded with a huge stimulus package to strengthen the economy.

The American Recovery and Reinvestment Act was a combination of tax cuts and government spending that totaled roughly $800 billion, most of which took effect in 2009 and 2010.

The federal deficit surged to $1.5 trillion in 2009 and remained above $1 trillion for the next three years, but then went back down to an average of about $575 billion a year in Obama’s second term through 2016, representing a little more than the 3% share of gross domestic product that economists consider a maximum sustainable rate.

The Republican tax cuts and new budget package amount to a massive fiscal stimulus comparable to the Recovery Act, but what’s different is that it is coming at a time when the economy is not faltering but chugging along.

The stimulus may give U.S. growth an extra short-term boost, but analysts warn that the additional juice could end up being too much of a good thing.

The jobless rate is already at a 17-year low of about 4%, a level many economists regard as full employment or close to that optimal level before spurring inflation.

Faster growth from the fiscal stimulus will more quickly stretch the labor market’s capacity to supply enough workers, pushing unemployment even lower and forcing employers to raise wages to compete for labor.

That, in turn, is likely to increase inflationary pressures and prompt the Federal Reserve to raise interest rates faster to head off a potentially overheating economy.

The specter of higher interest rates clearly has set in on Wall Street. The Labor Department’s report last Friday showing January’s wage growth was the fastest since 2008 suddenly awakened investors to the reality that the long period of very low inflation may be over as the U.S. and global economies are in synchronized expansion, and central banks, starting with the Fed, have begun to pull back on years of monetary support.

As stocks have fallen in the last week, long-term bond yields have surged, indicating investors are expecting interest rates to rise. Higher rates mean businesses, consumers and the U.S. government will have to pay more in interest expenses. And it will make it more costly for the government to finance budget deficits at a time when it needs to borrow more money.

The Fed recently has begun unwinding its bond holdings, so the U.S. Treasury will have to rely more on domestic and foreign buyers.

To be sure, U.S. debt, particularly Treasury securities, remains a trusted and desirable asset around the world. But America’s capacity to borrow as much as it needs — and at a favorable rate — isn’t assured.

Economists warn that the rising national debt will choke growth as more public money ends up going to support deficits instead of private investments and other economically productive uses.

“You already have deficits growing too fast, you cut the [tax] revenue out from under us, you increase the spending, and on top of that you rule out making changes to entitlement programs,” Goldwein said. “It ultimately spells fiscal disaster.”