As COVID-19 spreads to rural and suburban areas, Americans are increasingly losing faith in the president. 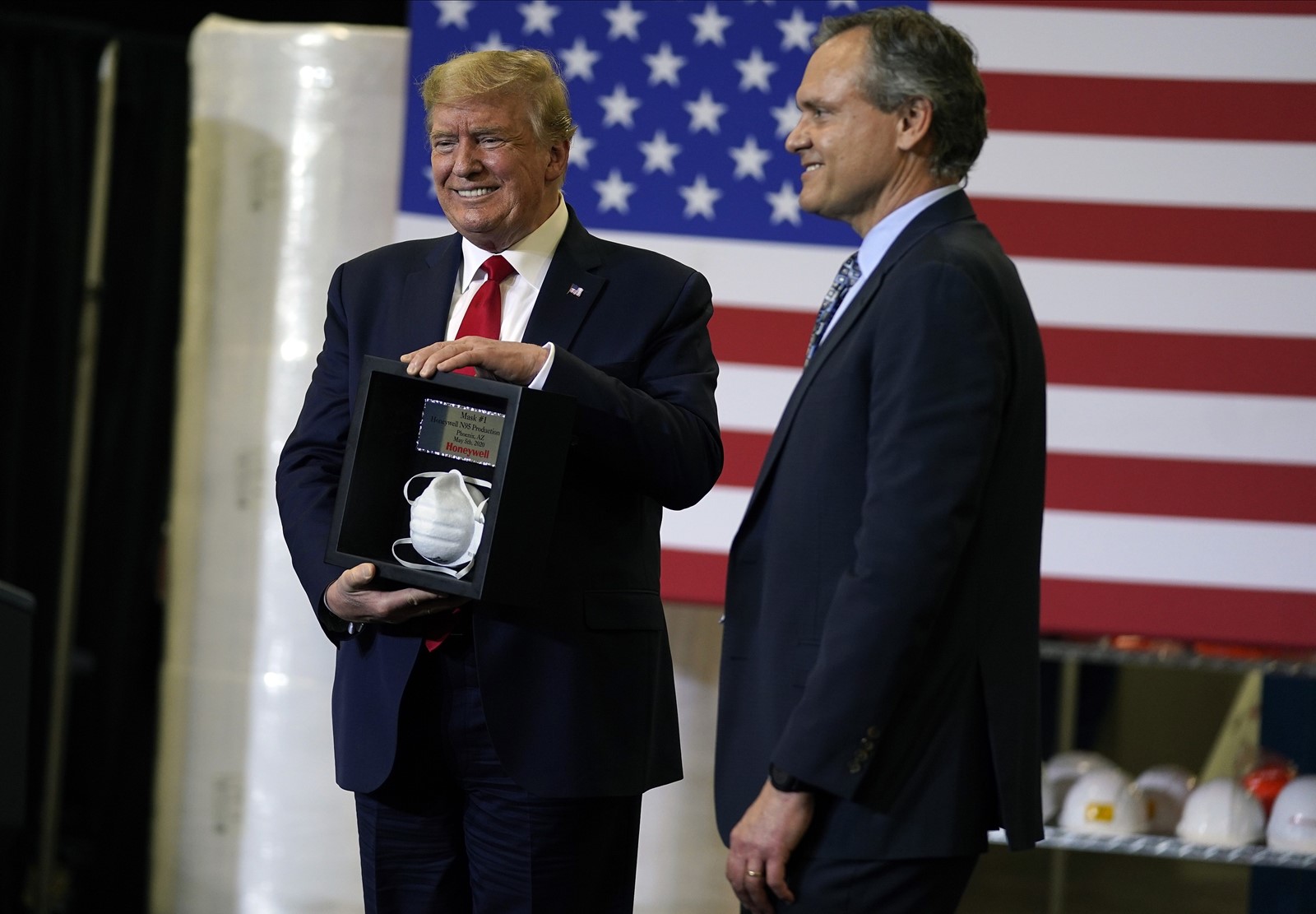 PRESIDENT TRUMP’S poll numbers have fallen as the virus has spread to red states. Above, Trump with a framed mask at a Honeywell plant in Phoenix in May. (Evan Vucci Associated Press)
PREVIOUS IMAGE

For weeks, as the coronavirus began to spread beyond the big coastal cities and into suburban and rural counties, the shift has raised a question: As illness moved into pro-Trump parts of the country, would political views shift?

The answer is emerging, and it’s more bad news for President Trump.

The issue matters because of how prominently the virus figures into this year’s politics.

Some elections never have an overriding issue. In the 2000 presidential election, the debate between George W. Bush and Al Gore meandered aimlessly among topics without ever settling on one that captured voters’ attention.

In other years, a single issue — often a war or a severe economic downturn — blots out other subjects. Right now, the pandemic is that singular issue.

Voters hire presidents to solve big problems. Trump has not been able to wish the virus away, and it shows no sign of disappearing on its own. Unless he can convince voters that he’s competent to handle the problem they’re most concerned about, he has little hope of getting hired for another four years.

Americans’ ratings of Trump on that measure have worsened significantly since the virus outbreak began. In March, for example, a Post-ABC poll showed a majority approving of Trump’s work on the virus, 51% to 45%. By May, that rating had flipped, with 53% disapproving to 46% approving, and now his ratings have plunged further.

Beyond the top-line numbers, things get worse for Trump: Just over half of those surveyed — 52% — disapprove strongly of his work. That’s twice as many as strongly approve.

By 64% to 34%, Americans say they don’t trust what Trump says about the pandemic. Again, the intensity is heavily on the negative side, with 46% saying they trust him “not at all,” while just 17% say they trust him a “great deal.”

The Post-ABC poll is hardly alone. A poll from Quinnipiac University released Wednesday found that, by 65% to 26%, voters said they trusted information from Dr. Anthony Fauci, the nation’s top infectious disease expert, about the coronavirus. Trump’s ratings were the mirror image: By 67% to 30%, voters said they did not trust information from him.

Some big factors strongly determine the way people view the virus and related questions, such as whether to wear a mask when out in public, whether the government should close businesses or cut off travel from other countries to slow the spread, and whether schools should reopen in the fall.

One factor seems to be biological: Some people appear to be innately more sensitive to disgust at the idea of contamination. That “disgust sensitivity” powerfully shapes how people think about and react to diseases, Vanderbilt University political scientist Cindy Kam has found. People who have a greater sensitivity to disgust more often support stringent control measures, such as closing borders or enforcing social distancing rules.

But in a deeply divided country like the U.S., partisanship also strongly colors people’s views.

In both cases, the party out of power was accusing the party in the White House of failing to do enough to counteract the disease, and voters picked up the cues from their party leaders, Kam and Sides found.

Those two factors — disgust sensitivity and partisanship — interact in complicated ways. For some people, the two reinforce each other; others are pulled in opposing directions.

Women, for example, on average are more sensitive to disgust than men, Kam’s research shows. Many Republican-leaning women, as a result, may face strong cross-pressures. The cues they get from Trump and other party leaders, who have downplayed the virus, conflict with their innate reactions.

And, indeed, in recent weeks, Trump’s ratings among Republican women have sagged considerably more than among GOP men.

Personal experience also plays a role. Early on in the pandemic, few Americans said they personally knew someone who had been sickened by COVID-19. Attitudes toward the disease, especially in rural and suburban areas with low amounts of illness, were abstract.

Now, by contrast, a majority of the public says they do know someone who has become ill, polls have started to show. That’s increasingly true in Republican areas, with states like Florida, Texas and Arizona having replaced New York and New Jersey as the locales where the most illness and deaths are taking place.

As that has happened, Trump’s standing has declined in those places. Approval of Trump’s handling of the coronavirus has dropped 15 to 16 percentage points in the Midwest and South compared with March, the Post/ABC poll found.

As voters turn thumbs down on his handling of the topic that dominates their attention, Trump’s chances of reelection have faded. This week, both the Quinnipiac survey and a new poll from NBC and the Wall Street Journal showed Trump trailing Joe Biden by double digits nationally.

Faced with widespread public repudiation of his handling of the crisis, Trump has tried several times to change the subject. On Thursday, White House aides parked a red truck and a blue truck on the White House South Lawn, loading the blue one down with paper that they said represented the burden of excessive Democratic regulations. The two vehicles served as the backdrop for a presidential speech that drew minimal attention.

The problem Trump faces is one that the English writer and critic Samuel Johnson famously illustrated some 250 years ago — the solid stubbornness of reality.

Johnson sought to disprove the philosophy of immaterialism — the idea that objects in the universe have no reality outside of our perceptions — by kicking a large rock.

“I refute him thus,” he declared.

That’s a flawed piece of logic, but a pretty decent guide to politics. Trump and his allies have turned rock kicking into a habit — repeatedly expressing surprise when they suffer broken toes as a result.

Reality exists. In politics, as in other aspects of life, trying to kick it out of the way seldom works for long.