The future face of House intelligence 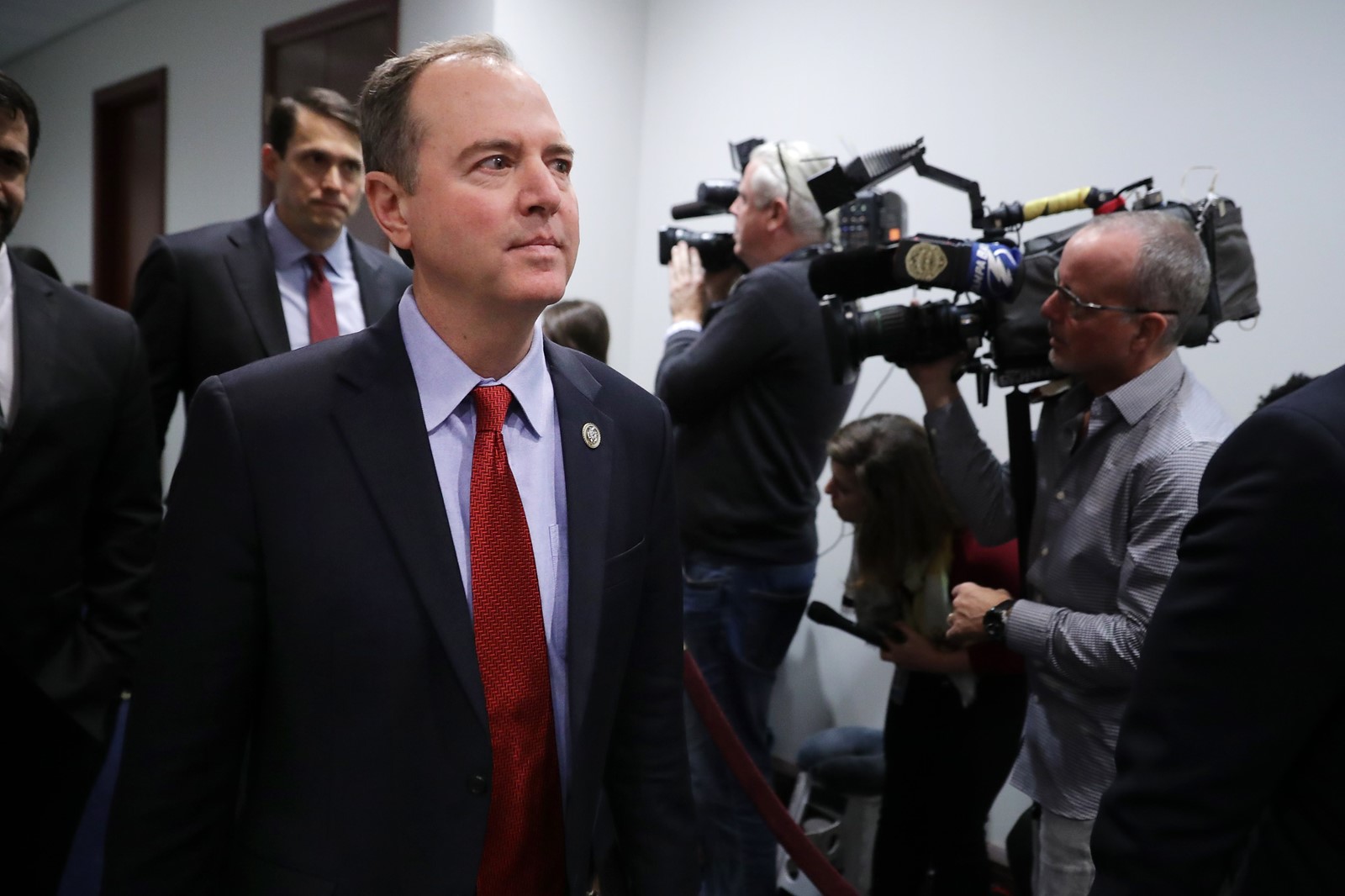 “THEY WANT ... to act unethically and have it be kept a secret,” Rep. Schiff says of GOP colleagues. (Chip Somodevilla Getty Images)
PREVIOUS IMAGE

As midterm election results rolled in on Nov. 6, Rep. Adam B. Schiff was at the rooftop patio of the Burbank Bar & Grille “trying to exorcise the ghost of two years ago,” when he watched Hillary Clinton lose to Donald Trump from the same vantage point.

With Democrats about to retake the House, the congressman from Burbank, just elected for his 10th term, is poised to become one of Trump’s most relentless inquisitors on Capitol Hill. Schiff is in line to lead the House Intelligence Committee, a position that would give him powerful new tools to investigate the president.

In an interview, Schiff insisted that his first priority is to restore “comity” to what is arguably the most fractious committee in Congress. Over the last two years, partisan infighting has jeopardized the panel’s oversight of the nation’s intelligence agencies and the complex threats they must counter, from cyberespionage to nuclear arms.

Ending the bickering won’t be easy. There’s little trust left among committee members after a bitter era of cloak-and-dagger maneuvering and competing partisan memos. A political San Andreas fault separates Schiff and the fellow Californian who has chaired the panel since 2015, Rep. Devin Nunes (R-Tulare).

And Schiff’s call for cooperation has limits, since his political to-do list is filled with goals Republicans are likely to oppose. In addition to probing whether Russians have financial leverage over Trump, an allegation the president vehemently denies, Schiff wants increase scrutiny of autocrats in Saudi Arabia and North Korea, two countries the president has embraced.

“He tells us we can sleep better at night now,” Schiff said about Trump’s claim in June that there is “no longer a nuclear threat” from North Korea. “On the basis of what I know, I’m not sleeping particularly better.”

The Intelligence and Judiciary committees are also expected to team up to scrutinize Trump’s new acting attorney general, Matthew Whitaker. The former U.S. attorney in Iowa has been a vocal critic of the Russia investigation led by special counsel Robert S. Mueller III, and critics fear Trump installed him atop the Justice Department to clamp down on the inquiry.

“The public has a right to know whether the president just appointed someone who has made any secret commitments in his handling of an investigation that may implicate the president or the people around him,” Schiff said.

Trump’s supporters will probably erupt when Schiff stops the committee’s efforts to investigate the Justice Department. Under Nunes, Republicans on the panel accused senior agency figures of twisting or hiding evidence to pursue a partisan investigation of the president, and they demanded vast troves of sensitive documents to make their case.

“All of that is going to end,” Schiff said. “We’re going to be defending the independence of the Justice Department instead of attacking it.”

Former committee staff members from both parties hope Schiff is able to press the reset button, noting that members of the Senate Intelligence Committee have maintained bipartisanship despite dealing with the same topics.

“The last few years have been terribly destructive for congressional oversight of the intelligence community,” said Jamil N. Jaffer, a Republican who served as the panel’s senior counsel and now teaches at Antonin Scalia Law School at George Mason University. “That’s bad for America, and bad for our national security.”

Michael Bahar, who worked as Schiff’s staff director before leaving the committee last year, said he had “no doubt” that his former boss will seek bipartisan consensus on intelligence challenges.

“You don’t pick Adam Schiff to be your chairman if you want vindictiveness,” he said. “That’s the bottom line.”

The House and Senate intelligence oversight committees grew out of the Watergate scandal and revelations in the mid-1970s that the CIA, FBI and other agencies had spied on Americans, from leftist groups to civil rights leaders. Democrats and Republicans sit on both panels, but they were envisioned as operating in a nonpartisan fashion.

“It seems sort of quaint now,” said David Barrett, a Villanova University professor who studies the relationship between Congress and the intelligence community.

Committee members and a few aides are permitted to review classified intelligence in a secure room under the Capitol. There are no windows, and during especially long stints some staff have taken vitamin D supplements to compensate for the lack of sunshine.

Partisanship on the House committee has ebbed and flowed over the years, and members of both parties said Nunes, the chairman, and Schiff, the ranking member, worked well together until what Democrats call “the midnight run” in March 2017 — two months after Trump took office.

Nunes secretly visited the White House complex late one night to review classified communications intercepts tied to the Russia investigation. He then suggested at a news conference that he was giving the intelligence to the White House, not the other way around.

That began months of turmoil in the closed-door rooms where the committee did its work while a regular scrum of reporters waited outside. Schiff became a forceful presence on TV, raising his profile nationally — even as it turned him into a target of Republican attacks.

“They want to be able to act unethically and have it be kept a secret,” Schiff said. “And when that would be revealed, they would consider that a leak.”

Over the last year, the committee almost never spoke with a single bipartisan voice, turning nearly every issue into a political slugfest — or what Schiff called “a breach of our compact with the intelligence community.”

Republicans ended the panel’s Russia investigation by saying they found no evidence of a conspiracy between Trump’s campaign team and Moscow. Democrats called that conclusion premature. Republicans also released a controversial memo alleging the Justice Department had abused its surveillance powers. Democrats issued their own memo in rebuttal.

Nunes is likely to be the ranking member, or lead Republican, on the committee after Schiff takes over, perhaps perpetuating the dysfunctional leadership dynamic.

But Schiff said he sees potential progress ahead because Rep. Trey Gowdy (R-S.C.) is retiring from Congress. Democrats have accused him of coddling some witnesses while badgering others, reminiscent of his tactics when he led a special committee that investigated the U.S. slayings in Benghazi, Libya, during President Obama’s administration.

“In the absence of the kind of Benghazi-like tone he tried to set, we’ll be halfway there,” Schiff said.

Nunes and Gowdy did not respond to requests for comment.

Andy Keiser, a Republican who worked on the intelligence committee before Nunes took over, said Schiff’s close ties to Rep. Nancy Pelosi (D-San Francisco), the front-runner to become House speaker in January, could increase the risk that political considerations will affect Schiff’s decisions as Democrats focus on Trump.

“My hope is they will be able to resist the temptation to use the power of the committee for partisan gains,” Keiser said.

Schiff said he’s more interested in restoring credibility for the committee — and not going after political enemies. Instead of overseeing the intelligence community, he said, Republicans on the committee focused on “bashing the Justice Department and the FBI” and “acting as defense lawyers” for the president.

“And that’s not going to happen anymore,” Schiff said.