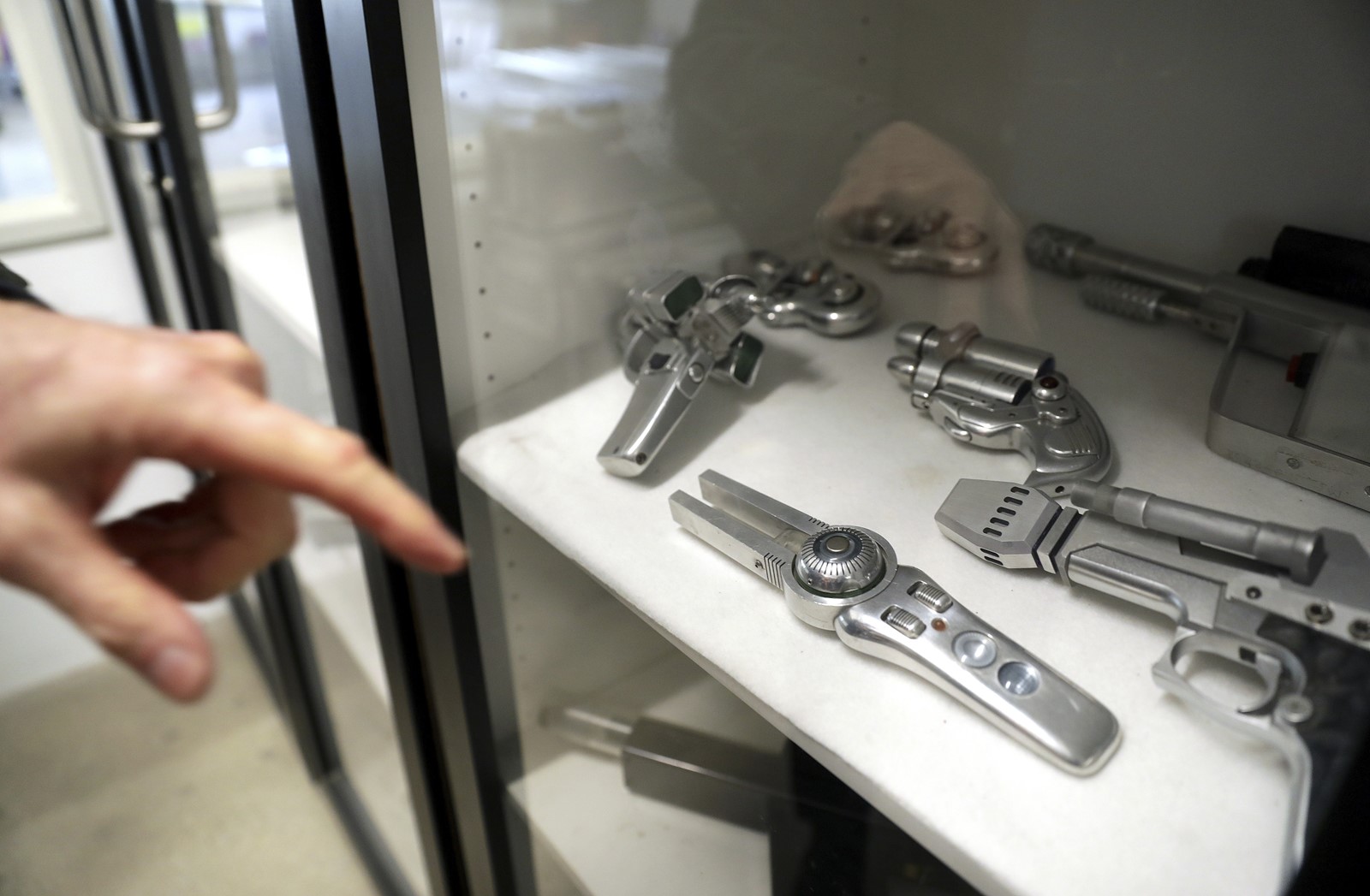 Standing amid his life’s work inside a cavernous warehouse in San Fernando, John Zabrucky is eager to show off what he calls his most famous “machine.”

But first, he must scuttle past a spaceship command deck, rows of computer consoles, radar scanners, shelves packed with sophisticated high-tech gadgetry — and even an alien autopsy — before arriving at the futuristic device.

“We did this for the original ‘Incredible Hulk,’ the TV series, back in the late ’70s,” said Zabrucky, the founder and president of Modern Props.

Since then, the device has been seen in more than 100 feature films and TV shows, including “Austin Powers” and multiple episodes of “Star Trek: The Next Generation.” Giving it a once-over, Zabrucky adds with a sparkle of pride, “You can see how well it’s made.” The apparatus has turned up in so many shows that a fan created a YouTube video devoted to its many appearances, dubbing it “the most important device in the universe.”

Zabrucky’s magnum opus, with its pair of giant elongated glass tubes that glow variously in yellow, red and orange, operated by a cutting-edge control board with dials, buttons and a joy stick, looks as if it would be right at home inside the CERN particle collider lab in Switzerland.

Modern Props is a Hollywood institution, but after 42 years in the business, Zabrucky has decided to close shop. Buffeted by the exodus of production from Hollywood and the march of time, the man who spent the last four decades fashioning the look of the future wants to focus on his own. “I’m 72,” he said. “I’m just not a spring chicken anymore.”

In a town where Modern Props has been a fixture of moviemaking, the closing was met with disbelief.

“I was surprised because they still have the best props in the city as far as I’m concerned. It’s extremely sad to see those props go,” lamented longtime client Jon Hess, a director and producer whose films include “American History X” and several shows on the SyFy channel. But at least, he said, “he’s going out with the lights on and didn’t wait for it to die.”

Independent prop houses sprang up in the earliest days of cinema. They rent out everything from coffee tables to cadavers and everything in between. But like so much of the industry, the prop business is subject to the vagaries of moviemaking.

At one time, the major studios built up their own massive prop departments, often emptying European castles of their tapestries and doors for period pieces. By the 1970s, however, the studios began disassembling their collections and outsourcing prop rentals to smaller shops. A sprawling marketplace of prop houses sprang up, each focusing on a particular niche.

Over the years, Modern Props earned a reputation for craftsmanship. Zabrucky says he designed about 95% of the props; an on-site fabricator and machine shop built them from scratch. His props all possess realistic details like moving pieces and blinking lights, and they’re built to last.

Demonstrating a slew of futuristic weapons, radar scanners and communicators in the hand-props room, Zabrucky says he’d hoped that his work would last for 10 years, but many have survived 30 to 35 years.

“I’ve never held up production because one of our props broke,” he said.

Even competitors tip their hats to Zabrucky.

“He made a lot of stuff that’s just unparalleled [in] craftsmanship,” said Frank Novak, owner of L.A.-based Modernica, another longtime prop house, largely focusing on furniture. “You just won’t find that in the prop business anymore. A lot of these props, if you look at them up close and not under movie lights, look imperfect, but his stuff was just perfect.”

Born in Warren, Ohio, Zabrucky left teaching jobs at Kent State and the University of Akron for Los Angeles in 1974 with his then-girlfriend, an aspiring set decorator, and degrees in art and design. “I was doing pretty well as a young man,” he said. “And when I hit Los Angeles, it was the complete polar opposite.”

Zabrucky and his girlfriend broke up and he soon found himself working “horrible” little jobs, including assembling scuba-diving equipment without sitting down.

And he was broke. He called the experience of collecting $32 a month in food stamps “humiliating.” But he said, “I didn’t want to call home and I didn’t want to go back.”

It was during this time that he happened to be on the Warner Bros. lot waiting for a friend to go to lunch when he witnessed a prop malfunction. “I thought it was a really stupid thing. It was a crude, futuristic microscope with a dome with a very high-powered light inside. This light bulb heated up the plexiglass to the extent where the thing collapsed.”

Zabrucky laughed, and a producer turned to him and asked if he could do better. He replied, “While I’m sleeping I can do better than that.”

It’s fair to say Zabrucky made good on that haughty rejoinder. The producer hired him, launching him into the prop business.

He began working out of his garage, building props for early ’70s sci-fi TV programs like “Quark,” Buck Henry’s ode to an outer-space garbage collector, and “Buck Rogers in the 25th Century.” By 1977 he had moved to a 4,000-square-foot facility in Inglewood and officially established Modern Props.

Outside the props business, Zabrucky was also part of the ’80s new-wave scene; he art directed for the band Devo and cast its video “Whip It.” He still sports that ’80s new-wave look, wearing a green military jacket with shoulder pads and black lace-up boots.

Most of his work sprang from his imagination rather than a remit from a set designer. Many of his props have become as iconic as the films they were in.

Partnering with an outside fabricator, he had a device made with a small screen mounted on a handle with a pair of protruding sensor flaps. Zabrucky showed it to the prop master on “Ghostbusters.”

“I said, ‘This would be great in your film,’ ” he recounted. The gadget became the film’s Psychokinetic Energy Meter, better known as the PKE meter used to detect ghosts and other paranormal elements. He also built the memory-vaporizing, alien-busting weaponry in “Men in Black.”

Later he added furniture to his prop business, traveling regularly to Italy and Europe to scout and purchase unique pieces, bringing a new design aesthetic to production. His S-shaped fiberglass Verner Panton chairs have made a number of appearances; his aluminum star chair was used in a dream sequence in an episode of “The Big Bang Theory,” when Sheldon presided over the Council of Sheldons.

Eventually, the furniture business outpaced what Zabrucky calls the machines. “It went from 50-50 to 70-30.”

Over the last 10 to 15 years however, Zabrucky says the prop business has weathered a number of changes. An arch activist against “runaway production,” he says it’s hard to compete with states that tender generous tax incentives. “If I offered that to somebody, it’s called a kickback. That’s what my immigrant Italian grandfather called it,” he said. “And if a state does it, it’s perfectly legal.” About 10 years ago, he launched a satellite office in Vancouver, but the vagaries of the business — from digitization to the growth of reality shows, which use few props — took their toll. Then came the recession. He laid off nearly half of his employees, many of whom had worked with him for years, and slashed the workweek. More recently, the streamers have given business a lift , but he says for some time his monthly intake has been on the decline, dropping from an average of $450,000 to around $200,000 (he declined to disclose the company’s profit). Only a handful of employees remain.

Then about four years ago, he got an offer to buy the Culver City facility — one “too good to refuse,” he says, although he declines to reveal how much he was paid for the space now occupied by Apple.

Rather than shut down the business, he said his “Catholic guilt” over his employees prompted him to relocate Modern Props to a 60,000-square-foot facility in the city of San Fernando.

When he turned 70 two years ago, however, Zabrucky says he began to take stock of his life. For years he’d been doing his own artwork, large, three-dimensional pieces with futuristic, steampunk elements, many with an antiwar theme.

“I don’t have that much time anymore to divide up. I don’t have as much energy as I used to,” he said. “These works are weighing on me. I just started thinking, wait a minute, what am I doing?”

Toward the end of last year he began unwinding Modern Props. He’s auctioned off much of the massive furniture collection and plans to donate the rest to charity.

Many of his “machines” still in high demand are tagged for their final hurrah in film. His hope is that an institution, like a museum, will take over his many futuristic machine props and his vintage science-fiction movie poster collection.

He expects that the lights will dim by the end of January, or February at the latest.

He’s not that sentimental about keeping anything for himself.

“Maybe something from ‘Blade Runner’ or one of the communicators from ‘Star Trek,’ ” but it’s not like I have to have it,” he sighed. “I’m not so attached to any of that stuff. My personal work is so much more satisfying to me, to make art as opposed to designing something for a movie.”

He bought a house in Italy that he and his wife are redoing; he sent some of his furniture there and plans to spend six months of the year there.

Zabrucky has been in the movie business long enough to know that every production has a final act and now, he says, it’s time to end scene.