It’s no surprise that the bright playoff lights turn Green 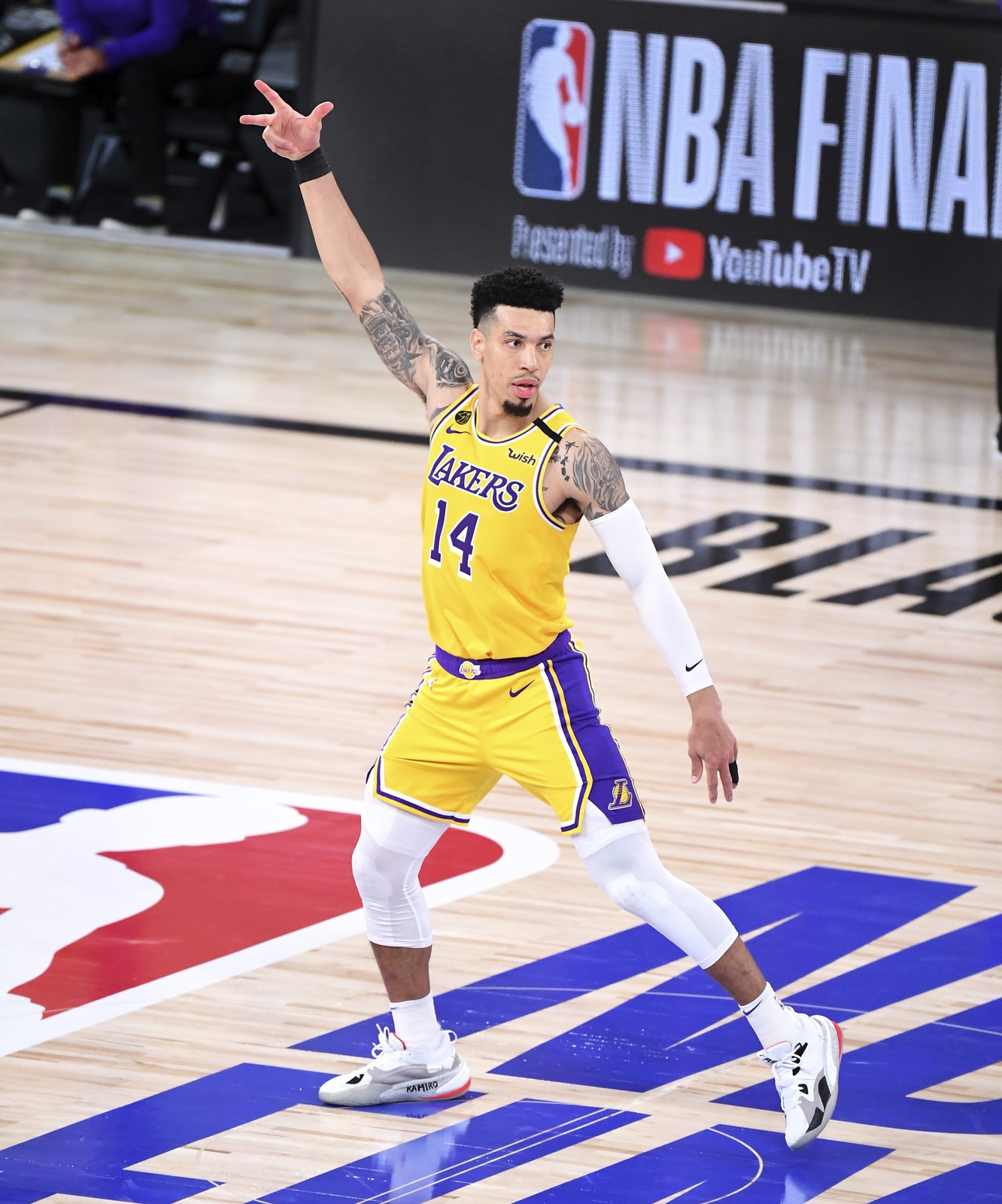 Danny Green shook his head in emphatic disagreement before he heard the entire question.

Surely he appreciated knowing that teammate Kentavious Caldwell-Pope had called him “Playoff Danny” after he stepped up and gave the Lakers firm control of Game 1 in the NBA Finals. Why would he reject that compliment after he put his imprint on the game and created more problems than the wobbling Miami Heat could handle?

Green clarified that he meant no disrespect to Caldwell-Pope. He just didn’t think he deserved that kind of praise. “I mean, I’m far from that, far from where I know I want to be or where I should be, but I just try to do my job to the best of my ability and be active,” Green said during a videoconference on Thursday. “That starts at the defensive end of the floor and then making the game easier for the guys around me. Offensively I know it’ll come, but of course I want to knock down shots and hopefully build rhythm. Finally starting to see the worm turn for me here, some games here and there.”

The opener of the Finals was one of those games. Green was a forceful presence in the second quarter on Wednesday, clearing the way for the Lakers’ 116-98 rout. Fans had savaged him and the Lakers on social media after they lost their playoff opener to Portland — he used his “Inside the Green Room” podcast to say he won’t invite “fake fans” to the team’s championship parade — but his teammates had faith he’d come through when it mattered.

“I’ve watched Danny in playoffs that he’s played in and I’ve seen him knock down big shots consistently,” Caldwell-Pope said. “For us as a team, we know what Danny can do and we just encourage him every day, every game, to keep shooting. We know that Playoff Danny is going to come out and knock down shots like he did” on Wednesday.

It shouldn’t be surprising that Green, who signed a two-year, $30-million contract as a free agent in July 2019, was the catalyst as the Lakers took the lead for good in Game 1. Or that he had 11 points in addition to three blocked shots, two steals and a plus-minus rating of plus-21, second to Anthony Davis’ plus-23. Playoff Danny has been to the Finals three times before and won twice, beating now-teammate LeBron James and Miami while with San Antonio in 2014 and prevailing again last season with Toronto against Golden State.

In making three of eight three-point shots Wednesday, Green broke a tie with Kobe Bryant and Derek Fisher and took seventh place on the list of three-point shots made in the NBA Finals, with 51. That’s only one of his valuable contributions. In addition to bringing the Lakers the outside shooting they needed, he has given them a feeling of confidence that doesn’t bleed into arrogance.

They’re in a solid position entering Game 2 on Friday against the injury-depleted Heat, but Green has shown them the importance of building on each day’s work and each win while striving for more.

“Just confidence, and also him knowing that to make a championship run you have to stay dedicated to the process,” Dwight Howard said of Green’s assets. “You know there will be great days and there will be days where it seems like it’s not going to work. Things happen throughout the season. But he’s been one of those guys that’s been consistent with his voice and effort and intensity every day. I appreciate him as a brother and a teammate. He’s done an amazing job all year, so very thankful to have a guy like Danny.”

Green and James are three wins from joining John Salley (Detroit, Chicago and the Lakers) and Robert Horry (Houston, the Lakers and San Antonio) as the only players to win NBA titles with three franchises. Green downplayed that as good fortune. “But, yeah, it’s a very humbling list, humbling category to be mentioned alongside so many other greats,” he said. “For me, I just want to continue to win and compete, so at the end of the day, whatever accolades or categories or lists that I make, it’s special and humbling, but just goes to show how long I been playing, and hopefully I can play a couple more years to be able to make some other weird lists that they have out there.”

Green’s quest to join that list has been overshadowed by James’ spectacular, multi-layered performances in the NBA’s Florida playoff bubble. But to Lakers coach Frank Vogel, Green isn’t a hidden gem — he’s a gem. Period.

“He’s a winner. He makes winning plays. He provides on a regular basis defensive toughness and rebounding and all those types of things, and great IQ and understanding,” Vogel said.

Green’s humility about his experiences as a Laker explains why they’re prohibitive favorites to finish this out, and quickly. “I got everything I expected and more in free agency. I was extremely happy about where I landed, the deal that we made happen, and the pieces that I’m able to play with and put together as a roster, and to be here in this position, this opportunity,” he said. “I know I still have a ways to go in doing my job and to fulfilling what I have promised them or what they expect of me, but hopefully, we got a couple weeks here left. We can make that happen, get that done.”

Playoff Danny — soon to be Champion Danny again — has spoken.