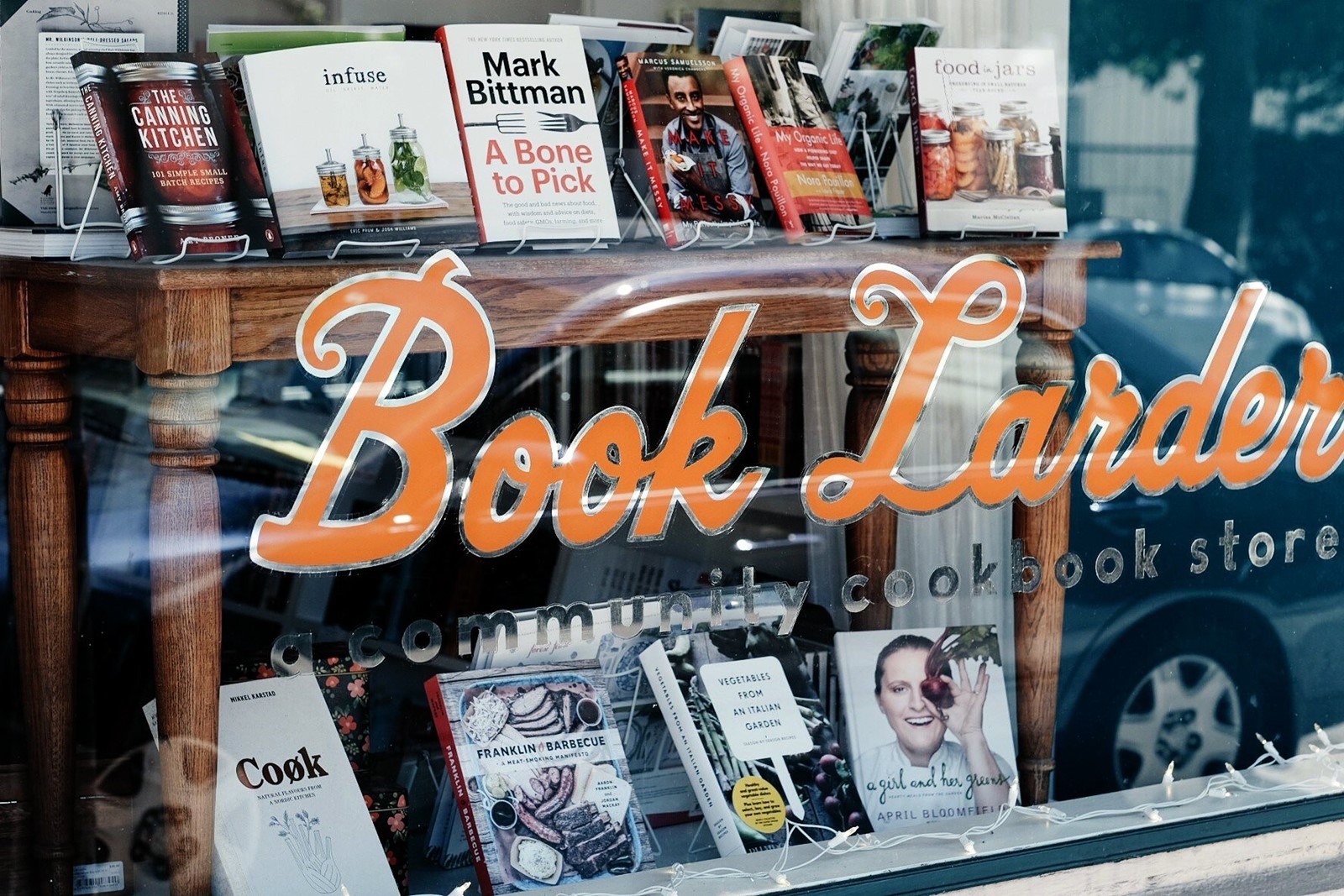 COOKBOOKS are displayed by a window at Book Larder in Seattle. (Abby Cerquitella) 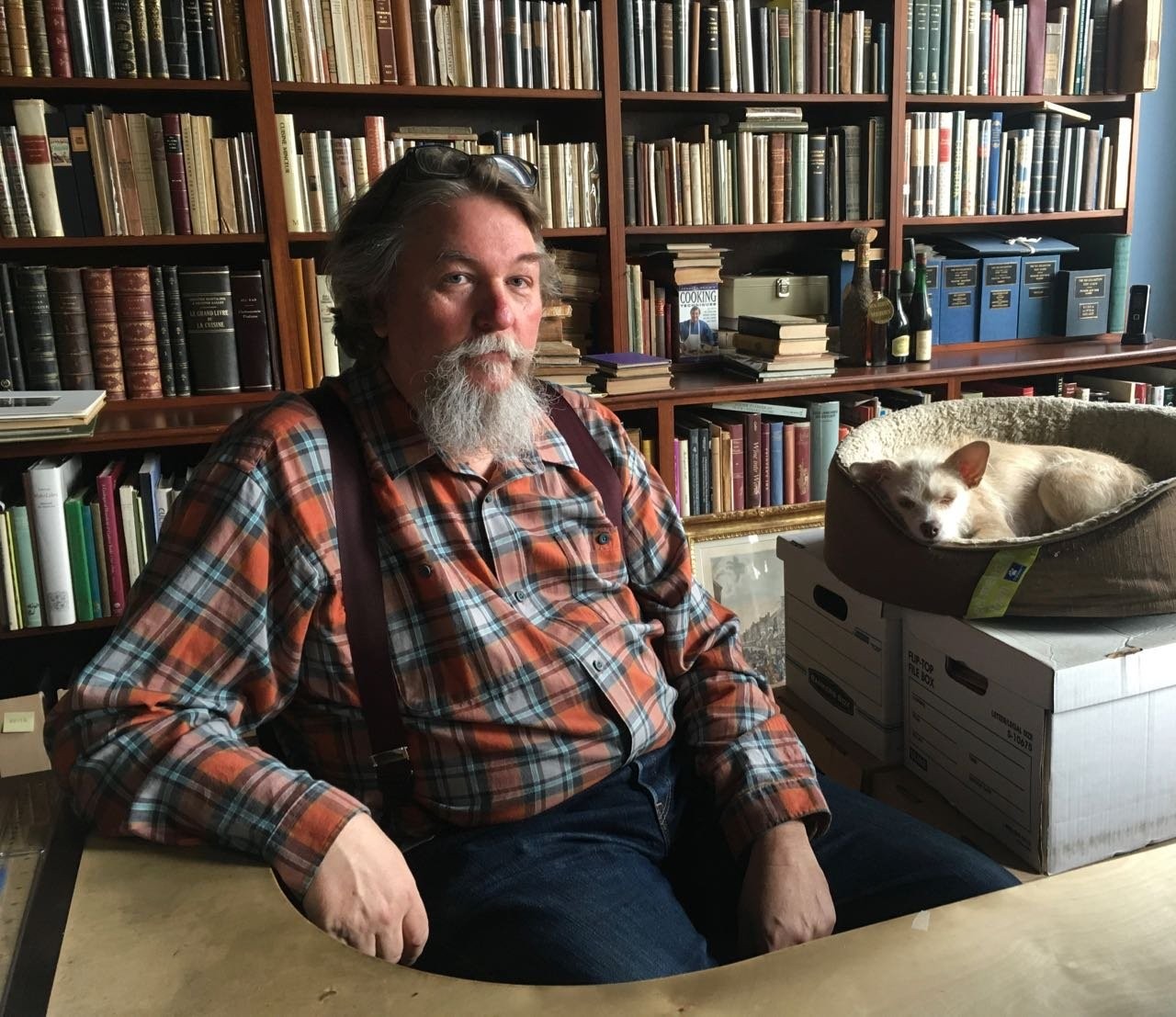 Cookbooks are a big part of the food community, and the shops devoted to them function as civic hubs, not unlike neighborhood farmers markets. Because while access has never been easier (thank you, Amazon 1-click), nothing stands in for flipping through the real thing. These days, there is only one cookbook shop in Los Angeles: Now Serving, the tiny shop in the Far East Plaza in Chinatown run by former chef Ken Concepcion and his wife, Michelle Mungcal.

For 20 years, Cook’s Library, the beloved cookbook shop in Beverly Grove, drew chefs and home cooks like a kitchen hearth. It closed in 2009, and two years ago, Cook Books, Janet Jarvitz’s vast collection of used and rare culinary books in Pasadena, closed its physical doors and became an online-only business. (Jarvitz is looking for a new location for her inventory of more than 30,000 titles, which includes historic cooking pamphlets and almost every issue of Gourmet.)

The Iliad Bookshop, a cavernous used bookstore in North Hollywood, features a packed aisle of food and beverage books that includes out-of-print titles, and the Last Bookstore in downtown has a strong collection of cookbooks, as does Vroman’s Bookstore, the venerable independent bookshop in Pasadena, but these are annexes rather than centers.

Owner Lara Hamilton has predominantly new titles among her inventory of about 1,200 books, with a focus on U.K. imports and a strong Pacific Northwest collection, as well as many food journals and quarterlies. The bookstore also has a demonstration kitchen with a full-time culinary director who teaches cooking classes and oversees food for the some 175 events that Book Larder hosts annually. “The kitchen is there to bring the books to life,” says Hamilton, a book collector who worked in tech before opening Book Larder in 2011.

Open in Manhattan since 1983 — 1983! — Kitchen Arts & Letters manages to cram roughly 12,000 books into a 750-square-foot space. While founding partner Nach Waxman now focuses on out-of-print books, managing partner Matt Sartwell oversees an inventory (“up to the ceiling”) that’s far more than just recipe books, encompassing many aspects of food culture, history and anthropology, as well as technical manuals and journals. The shop works in conjunction with the nearby 92nd Street Y community center to host talks and tastings.

Started over 20 years ago in New Orleans’ French Quarter by former chef Philipe LaMancusa, this quirky cookbook shop survived Hurricane Katrina and then relocated about a mile away from the Quarter in 2015. Now it houses about 10,000 books, including new, used, rare and out-of-print cookbooks and food-related titles, with an emphasis on Louisiana books. LaMancusa and partner Debbie Lindsey also host book signings and neighborhood-oriented food pop-ups (Tuesdays often spotlight chiles rellenos) and sell a collection of LaMancusa’s house-made spices and spice blends.

After eight years in the rare book world, Elizabeth Young opened a Brooklyn bricks-and-mortar cookbook shop in November with an inventory that includes a few thousand rare books, a few hundred new books, and the library and personal correspondence of M.F.K. Fisher. As well as cookbooks, Young has books on food culture, history and politics, as well as historical documents and items such as 17th century Austrian wooden pastry molds and trade catalogs for washing machines.

In 2008, Celia Sack opened Omnivore in a former San Francisco butcher shop, a 500-square-foot space that still sports the dungeon-like door and ceiling rigging from its butchery days. Sack was previously a rare book specialist at an auction house, so there’s a strong antiquarian component to the shop, where you can find first editions and out-of-print books along with the rows of new covers. Sack also curates free book signings and author events.

Don Lindgren and his wife, Samantha, opened their cookbook shop in 2006 in Portland, Maine, and then in 2012 moved it into an old mill in the nearby town of Biddeford. There they have more than 30,000 books, manuscripts, photographs and other food-related ephemera, including more than 5,000 historic menus and 3,000 images of pigs. Lindgren is at work on a multivolume catalog exploring the community cookbook.

The more than 4,000 books on the shelves at this Lincoln Park shop are new — mostly cookbooks, but also biographies and memoirs, and some devoted to travel and history. There are sections on diabetes, gluten-free, vegetarian and vegan cooking. Opened in 2015 by owner Esther Dairiam, the shop also has a kitchen built into the space where visiting authors can cook from their own books.