Would we take the pandemic more seriously if we understood what it’s like to die a COVID-19 death? 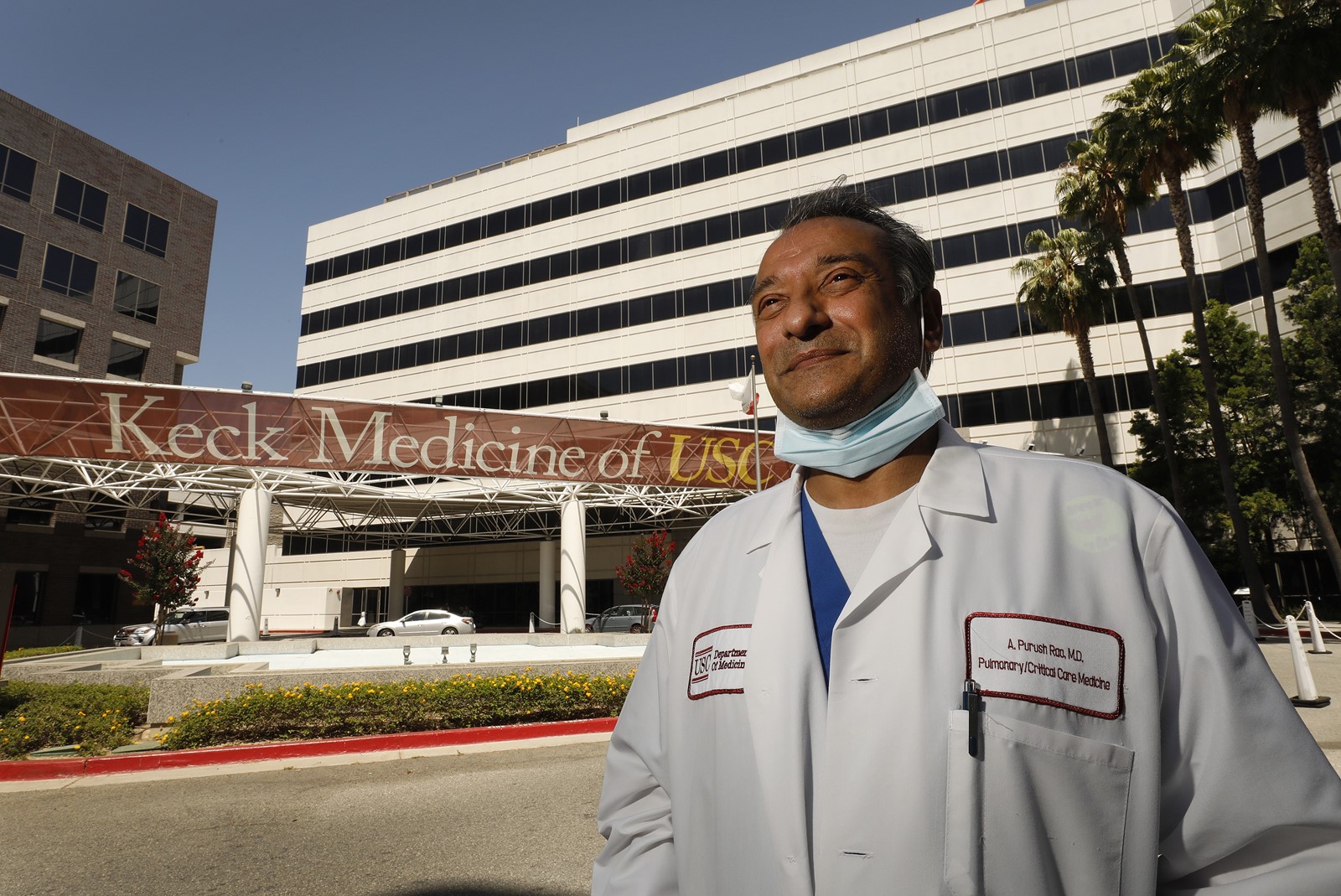 DR. ADUPA RAO, a pulmonologist and critical-care specialist at Keck Hospital of USC, is on the front lines of the COVID-19 war. Of patients, he said: “It’s almost like you’re watching a goldfish out of water.” (Al Seib Los Angeles Times)
PREVIOUS IMAGE

They beg for help. They flail. Their eyes fill with terror.

“We have people that are sitting in bed and they’re breathing like they’re running a marathon at full speed,” said Dr. Adupa Rao, a pulmonologist and critical-care specialist at Keck Hospital of USC.

“They’re breathing so fast and so deep, they’re trying to catch their breath,” Rao said. “It’s almost like you’re watching a goldfish out of water, gasping to get air, and it can never get enough.”

For patients, “it’s like being under water and trying to swim toward the top and you can’t get your nose above the top of the water,” Khodadadi said.

He’s been an ER nurse for 10 years after working as a paramedic and ambulance driver, but Khodadadi described the virus as an invisible enemy, with hospitals as battlefields. He recalls one surge of patients rushed in from convalescent homes. Many of them were in foggy, altered states, unable to provide their names or other basics. On some days the flow of patients is brisk and constant, some of them mildly ill and some in a panic.

“They struggle, try to get out of bed, try to pull things off and leave.... Some of them may even be saying, ‘Help me, help me, help me. I can’t breathe. Help me,’ ” Khodadadi said. “They say, ‘Save my life, now.’ In so many words, and without words. Just by the way they look at you. They want to grab you, as if I have some magic medicine I could give them, and I wish I did.”

It didn’t have to be this way. The United States has had nearly twice as many COVID-19 deaths as the next closest country after five months of failed national leadership, haphazard local policies on testing, tracing and reopening, and widespread public resistance to basic, simple precautions that could have saved lives.

The anticipated summer lull has instead become a summer surge, with record-setting numbers of new cases in California and elsewhere. (Remember when President Trump predicted confidently that warm weather would kill the virus?)

And yet we still see mind-boggling resistance to change. Just a few days ago, in our own backyard, the Orange County Board of Education recommended that schools reopen without masks or distancing.

Would we act differently if more of us had lost someone, or if we cared about the risk we’re exposing healthcare workers to? Most who test positive end up recovering, which might be one reason for blase attitudes. But would we take the pandemic more seriously if we knew what it’s like to die a COVID-19 death?

Hard to say, but I asked healthcare providers to describe what they see each day in emergency rooms and intensive care units, and let me tell you, you don’t want to experience this virus.

“One of the unfortunate things we’re seeing in the ICU is that people are not getting better like we anticipate them to get better,” Rao said.

That’s despite treatments that include high-dose oxygen, ventilators, lung-bypass machines, blood thinners to prevent clots that attack organs and cause great pain, and steroids to reduce inflammation in the lungs. In advanced stages, the sickest patients at least have the mercy of being sedated.

“I think the unspoken tragedy of this whole COVID experience has been the loss of humanity toward the end of someone’s life,” Rao said. “We used to have the ability to be with our loved ones when they were passing away. Now people are passing away in isolation.”

In one case, a dentist whose son is a physician colleague of Rao’s died of COVID-19 without his son getting a chance to hold his father’s hand or say goodbye face to face.

“This last week,” Rao said, “I had to intubate a 56-year-old man with a kidney transplant, and prior to his intubation he was able to see his wife through the doorway, and you could see that in his eyes he was thinking, ‘This may be the last time I get to speak to her.’ ”

I met with Rao outside Keck Hospital while he was on a short break from a 12-hour shift. He said the COVID unit had seven critically ill patients at that moment, including a mother who gave birth two months ago and another who went into respiratory failure while delivering. Of the seven patients, two were in their 20s and the other five were in their 30s to 60s.

“The experience of suffering takes on a completely new tenor” with COVID, said Dr. Sunita Puri, a Keck palliative-care specialist and author of “That Good Night: Life and Medicine in the Eleventh Hour.” “Now we’re having to facilitate goodbyes over iPads.”

Ordinarily she explains the typical characteristics of disease and the benefits and risks of medical procedures, Puri said, but that discussion is complicated by how little doctors know about the coronavirus. All the more reason, Puri said, for families to have conversations — before it’s too late — about procedures patients are willing to endure and limitations they’re not willing to live with.

Palliative medicine strives to offer the most comfort and dignity possible for critically ill patients, but families still struggle to determine whether life is being extended or death is being prolonged. Puri said some critical COVID patients are being pronated in special beds in an attempt to reoxygenate damaged lungs, but the side effects can be extreme.

“The pressure buildup from fluids can cause parts of the face and other parts of the body to fluff off,” Puri said. It’s “kind of grotesque,” she added, and it’s difficult even for medical staff to witness.

Khodadadi told me about a convalescent home employee in his 30s who arrived by ambulance in full cardiac arrest.

“We did CPR, we worked on him, we did everything,” said Khodadadi, but the young man died.

“We have to understand that we are at war here. We are dealing with an enemy that is microscopic, something we can’t see,” Khodadadi said. “If we were in World War II we could see the airplanes coming, see the tanks, see the people running through the fields shooting at us. In this war we can’t see the enemy. It’s a surprise attack and the tools we have to fight this are our masks, properly worn masks, and keeping our hands clean.”

Khodadadi said he fears getting exposed and taking the virus home to a young daughter with an autoimmune disease. He said his best stress release valve is talking things through with front-line colleagues, such as a nursing buddy who recently had a particularly bad shift.

“I asked him how he was doing and he said, “Man, I just sat in the car and cried today. I thought it wouldn’t end. It was like the ‘Twilight Zone.’ ”

Puri described losing a female COVID patient whose daughter, a college student, was distraught that despite the loss she’d experienced, her friends were not taking basic precautions to limit the spread of the virus.

“A lot of young folks don’t want to wear masks. I think they forget that you can get COVID just like you can get into a car accident,” Puri said, likening face covering to buckling a seat belt.

Rao, who is also a cystic fibrosis specialist, said a shorter life expectancy for people with that disease helps prepare patients and families somewhat for death. COVID-19, he said, “hits like a ton of bricks.” Death can come quickly, leaving loved ones in shock.

“Sadly, it’s the same face every time. It’s the face of denial,” Rao said. “The face of utter this-can’t-be-happening, The blank look of, ‘I know you’re telling me something, but it’s not registering.’ ”

For the first three weeks of the pandemic, Rao stayed in dorms at Keck to avoid taking his exposure home to his family. But avoiding work was not an option.

“A part of the Hippocratic oath literally says I will go into the homes of the sick and I will take care of those who are the most sick,” Rao said.

But we are in a national emergency that hasn’t been treated like one, he said, nor have we gotten the leadership the crisis screams out for. Rao told me he supports our rights of free choice, but “there’s also a social responsibility to your personal freedoms.”

When we were done talking, Rao walked up the hill and went back to work, lives in the balance all around, in the heat of a summer surge that didn’t have to happen.