Building for the homeless without government help 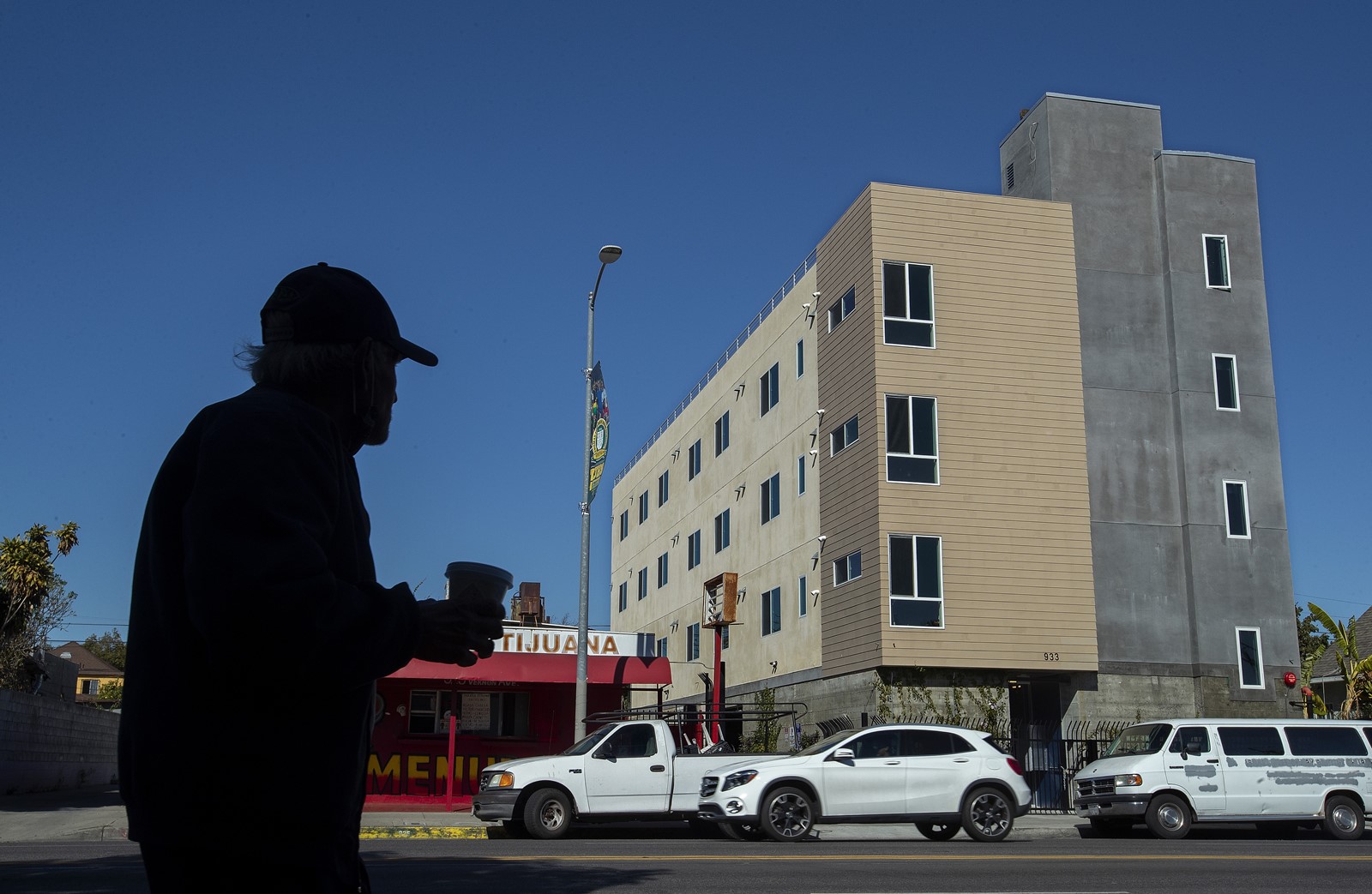 From the fourth-floor rooftop patio on East Vernon Avenue, Los Angeles is a 360-degree panorama: to the north, the skyscrapers of downtown; to the south, the Palos Verdes Peninsula; to the west, the Santa Monica Mountains; to the east, snow-capped Mt. Baldy.

This serene tableau will soon be enjoyed by 20 homeless people who will begin moving into the South Los Angeles building next week.

Their new home, a tower of concrete and wheat-toned cladding between a taqueria and a stucco house, is the prototype for an initiative to be announced Wednesday to build up to 1,800 units of supportive housing for homeless people without government construction subsidies.

The goal is to demonstrate how the private sector, in alliance with key nonprofits and the faith community, can build housing for homeless people faster and for less than developers working through traditional government programs. Behind the plan is a team consisting of a market developer, a homeless service provider, a group of Los Angeles church leaders and a social-impact investment manager.

They’re backed by a private equity fund that has topped $100 million and is still growing. Kaiser Permanente is the largest investor, having contributed $50 million as part of its mission to promote better health.

The one-bedroom units will be built for under $200,000 each and will open in as little as two years from the acquisition of a site, said Deborah La Franchi, president and chief executive of impact-fund manager SDS Capital Group, which currently oversees $1 billion in social impact funds.

If the team makes good on that promise it will be providing supportive housing — a permanent home with mental and physical support on site — for less than half the cost and in a fraction of the time required to build with traditional tax-credit financing.

“This fund will be the most impactful product we will ever be able to create,” La Franchi said. “The end beneficiaries are people living on the street today.”

La Franchi said the fund, which she is hoping to enlarge to $150 million, allows the group’s developer, RMG Housing, to close out its financing quickly and in one step. That gives it a huge advantage in speed and cost over developers relying on tax credits that must be paired with layers of financing from multiple government and private sources. That can cost a developer two to three years before construction can begin.

In contrast, RMG, with 100% of its financing at hand, can move quickly from one project to another.

“One of the keys of our model is funding from SDS,” said Tim Roth, RMG’s chief executive. “They enable us to scale up.”

Roth, whose for-profit firm is now dedicated to providing supportive housing for those with mental and physical disabilities, said he would like to think the project is blazing a trail, but won’t speculate on how easy it would be to replicate the unusual qualities of their team and the serendipitous way it came together. One of its key relationships was formed in a Hermosa Beach jiu jitsu studio. Roth, at the time a developer of high-end townhomes and single-family homes, found himself sparring with Andy Guy, a supervisor at Homeless Health Care Los Angeles, a Westlake-based nonprofit that provides homeless outreach and case management for supportive housing.

“Trial through combat,” Roth joked. “He knew what I did. He introduced me to what he was doing. They had a crisis. I started looking into it.”

The crisis was an excess of clients eligible for supportive housing with nowhere to house them.

“We have many clients that are sitting with a Section 8 voucher,” said Mark Casanova, executive director of Homeless Health Care, referring to federal housing subsidies. “People have a certificate. They’re ready to find a unit. There aren’t enough units available.” Casanova committed Homeless Health Care to provide the clients and case management for any units Roth could produce.

That relationship blended with another Roth was forming with the faith community. He was one of several developers who responded to a request for proposals from a church that was seeking to generate revenue from underused land.

“What made RMG resonate with us is they were saying something that no other developer said to us, that is, we will partner with you 50-50,” said John Cager, pastor of the Ward AME Church near USC.

“If you go through South L.A., you’ll see a lot of churches with developments by their churches or on their properties that have the church’s name, but the issue is the churches often have nothing to do with them or don’t even own them because developers have been coming to the Black community to rob churches since the Eisenhower administration,” Cager said.

The idea blossomed when Cager, who is also president of the Los Angeles Council of Religious Leaders, introduced Roth to other churches.

Now, about half of RMG’s projects are on properties leased from churches that are facing diminished membership but want to retain a connection to their communities, Roth said.

“It’s a good marriage,” Roth said. “The missions align very well. These churches have excess land, an abundance of excess parking, ancillary parcels. They have a lot of deferred maintenance. Most have a cash crunch.”

The final piece of the development program fell into place when Roth’s partner, Mo Zahrawi, described their development model to Kip Hamilton, the managing director of SDS, which currently oversees about $1 billion in social-impact investments. He briefed La Franchi.

“I loved what I heard,” La Franchi said. “How it worked, how they kept cash low.”

La Franchi examined the financials of four RMG prototype projects, including the tower on East Vernon. She concluded what she heard was true and put everything she was doing on hold to make permanent supportive housing her No. 1 priority.

She lined up several banks and the Weingart Foundation as investors.

Kaiser pushed the campaign over the top, contributing a quarter of its $200-million Thriving Communities fund.

Kaiser was attracted by the nexus between health and housing, said John Yamamoto, vice president for government relations and community health for Kaiser Permanente of Southern California.

SDS has now funded two RMG projects and is expecting to close another one every other month in 2021, most between 40 and 100 units.

After those are completed, the owners, RMG or the churches, will obtain conventional financing and repay the fund so the money can be invested in a new round of projects.

The fund has a six-year life. La Franchi said she expects to revolve the fund at least once — enough to fund 1,200 units — and could plow it back in a third time if the city would expedite the permitting process, which remains the biggest drag on timing.

Like supportive housing built with tax credits, these will be required through deed restrictions to maintain affordable rents for 55 years, she said.

Homeless Health Care, the only link in the collaboration to receive government funding, will have to come up with the tenants with subsidies and the case managers, who will each have free rent in one of the buildings.

“There is obviously some creative fundraising we could do,” Casanova said. “We’re working on that. Let’s see what the future brings.”