Republican lawmakers in some states are granting themselves broad powers and limiting voter access. 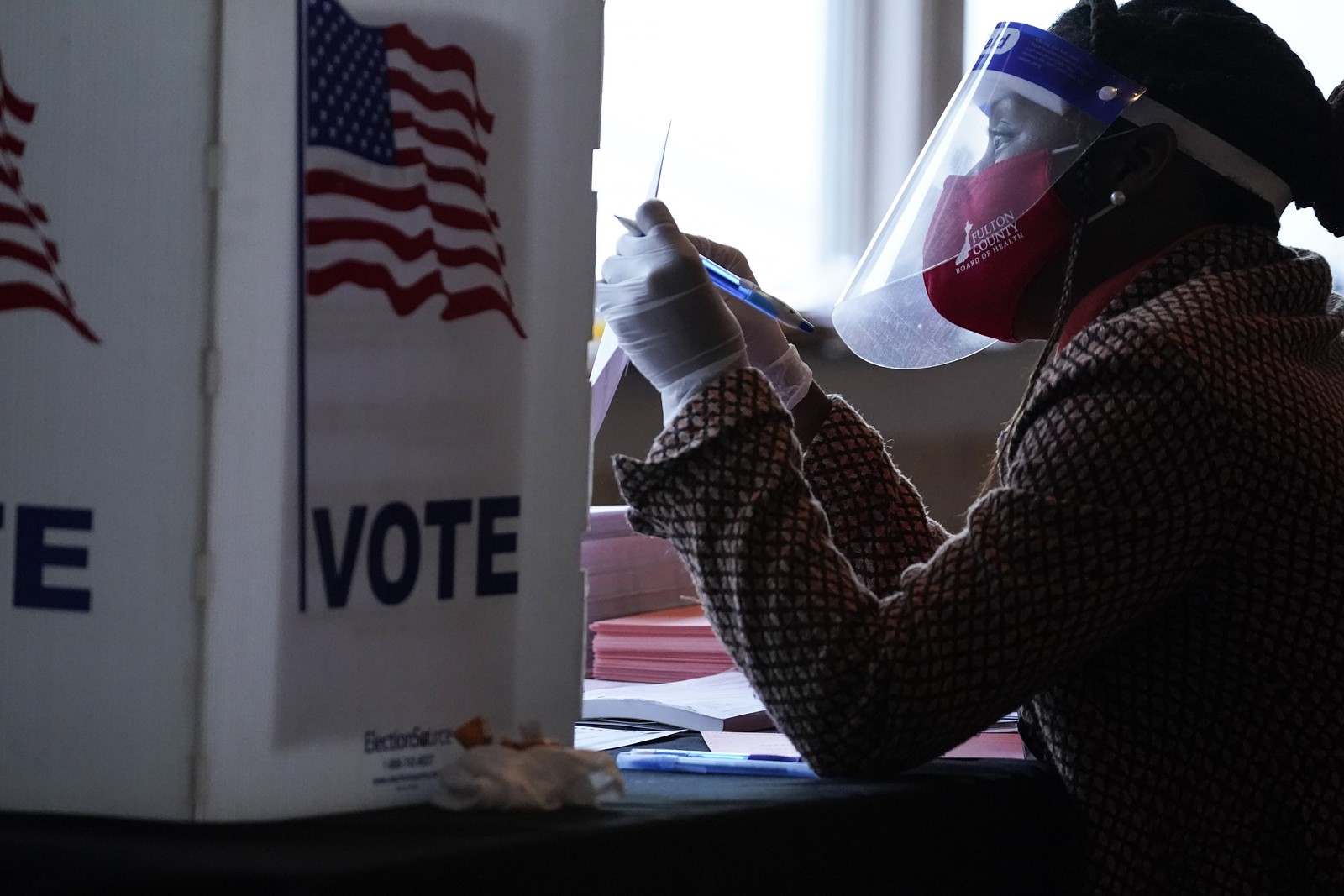 A POLL WORKER in Atlanta talks to a person voting via paper ballot on election day in November. Thanks to a new law, Georgia’s GOP-controlled Legislature now has greater influence over the state election board. (Brynn Anderson Associated Press)
PREVIOUS IMAGE

Partisan takeovers of election boards. Threats to fine county election officials and overturn results. Even bans on giving water to voters while they stand in line.

In addition to their nationwide efforts to limit access to the ballot, Republican lawmakers in some states are moving to gain greater control over the local mechanics of elections, from voter registration all the way to certifying results.

The bills, which have already become law in Georgia and Iowa, resurrect elements of former President Trump’s extraordinary campaign to subvert his reelection loss, when his backers openly floated the notion of having legislatures override the will of their states’ voters and launched legal challenges against measures that made it easier to vote during the COVID-19 pandemic.

“It’s an overreach of power,” said Aunna Dennis, executive director of the Georgia chapter of the voting advocacy group Common Cause. “They’re definitely trying to do an upheaval of our election system.”

In a step widely interpreted as a way to check the state’s Democratic strongholds, Republican Gov. Brian Kemp signed a bill Thursday to give Georgia’s GOP-dominated Legislature greater influence over a state board that regulates elections and empowers the board to remove local election officials deemed to be underperforming.

Other states are moving in similar directions.

In Iowa, after left-leaning counties proactively sent voters absentee ballot applications in 2020, a recently signed law bars election workers from sending the forms out unless requested and threatens to fine officials for violating rules.

A South Carolina proposal would give lawmakers new oversight of the members appointed to the currently independent State Election Commission.

In Arizona, a Republican proposal that has since died would have allowed the Legislature to overturn election results and appoint its own electoral college representatives.

The Brennan Center for Justice, a public policy group that supports expanded voter access, tallied more than 250 restrictive proposals in the states, many of them intended to roll back voting methods that were expanded because of the pandemic. That includes early and mail voting options, both of which were popular among voters who sought to avoid virus transmission at crowded polling places.

Republicans have said the bills are meant to shore up public confidence in elections, though members of the GOP have been the leading voices spreading baseless claims that the 2020 election was fraudulent. There is universal agreement among experts that the election, in which Republicans performed well in congressional and state legislative races, was free of widespread problems.

Georgia’s new law is among the most consequential for future elections.

The measure will allow the Legislature to select the chair of the state election board and make the elected secretary of state a nonvoting member of the panel, essentially sidelining the chief election officer who was picked by voters. The board could then remove local election officials and replace them.

“This bill is a tragedy for democracy, and it is built on the lie of voter fraud,” Lauren Groh Wargo, chief executive of the group Fair Fight Action, which advocates for greater voter participation, said on a call with reporters.

“It means that radical, right-wing legislators, if they don’t like how elections are being run in Quitman or Lowndes or Fulton or Dougherty counties, they can wholesale replace those election administrators and put folks from the other side of the state in charge.”

The new law also forbids local officials from taking financial grants to help run their elections, narrows the window in which voters can request an absentee ballot and requires an ID to vote absentee by mail. It limits where ballot drop boxes can be placed and when they can be accessed. Giving food or water to voters waiting in line to cast ballots is also forbidden.

The move comes 4½ months after Georgia confirmed President Biden’s victory with three statewide counts of nearly 5 million ballots, and there was no evidence of problems.

“They are tweaking the laws however they can to make it harder and to put up barriers for voters to stumble on,” Georgia state Sen. Jen Jordan, a Democrat from Atlanta, said at an event sponsored by the progressive group The NewDEAL.

“They also are kind of putting in this backstop, if you will. If that is not going to stop voters at the local level, then they are going to make sure they can come in and take over these local election boards.”

The GOP is also cracking down on methods that counties used to increase participation and make voting easier during the pandemic.

Republicans in Texas, which already has some of the most stringent election laws in the country, are moving to in effect ban curbside voting, a method used in the last election by liberal-leaning Harris County, which includes Houston.

Iowa Gov. Kim Reynolds, a Republican, this month signed a GOP bill that closes voting sites at 8 p.m. rather than 9 p.m., shortens the window for early voting by nine days, imposes new restrictions on mail and absentee voting, and threatens civil fines and criminal charges against local officials who depart from state election law or guidance.

“This is a total takeover of elections by the state,” said Linn County Auditor Joel Miller, who was sued by the Trump campaign for mailing absentee ballot applications with some information already filled out to registered voters. “We did everything we could to increase participation and engagement in the democratic process, and evidently some people thought that more people participated than they wanted and they decided to put limitations on it.”

Eliza Sweren-Becker, voting rights and elections counsel at the Brennan Center, said it’s disheartening to see Republicans target the local election officials who worked to boost turnout and ensure polling places would be safe during the pandemic.

“It’s really a shame because our local election officials, in many ways, were heroes last year, and to see them attacked by their state lawmakers is really unfortunate,” she said.