From despair to signs of hope 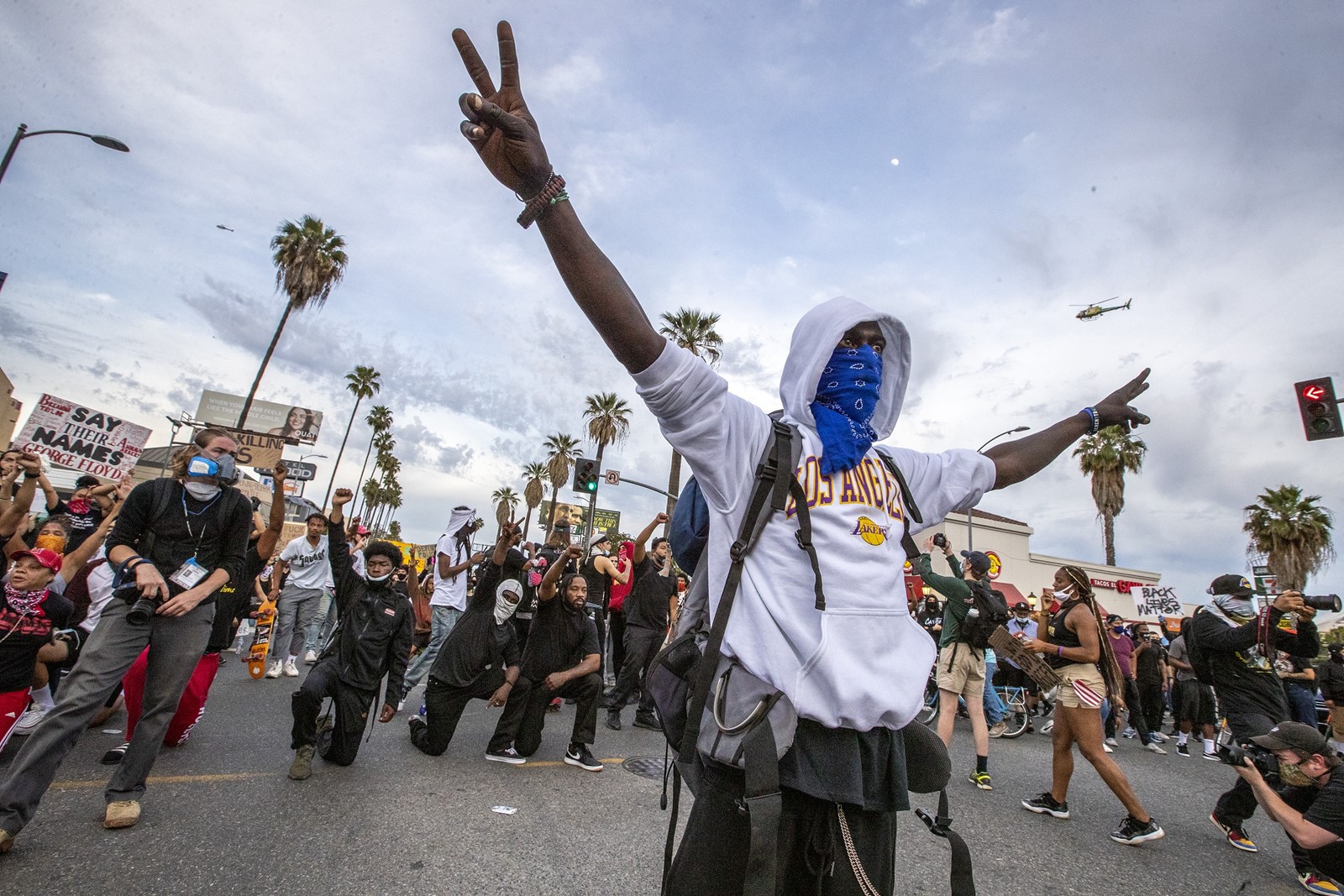 HUNDREDS of protesters march in Hollywood against police brutality after the death of George Floyd. The speed and scale of public outbursts have offered a dizzying kaleidoscope of images of a nation at war with itself. (Robert Gauthier Los Angeles Times)
PREVIOUS IMAGE

I’ve been searching for something hopeful to latch on to in the week since we watched George Floyd dying on a Minneapolis street, handcuffed and pinned to the ground by a policeman’s knee.

But each ray of light I could find wound up with a troubling dark side.

I was encouraged when all four officers involved in Floyd’s death were immediately fired. That was a bold move by the city’s mayor; a response we haven’t seen before. But four days passed before the perpetrating officer was arrested and charged with murder — enough time for cynicism and grief to send angry residents to the streets.

I was optimistic enough to believe that the spread of protests across the country signified a long-overdue national reckoning with the plague of police brutality. But looters and troublemakers hijacked that — and property losses vied for attention with the injustice of Floyd’s death.

I was heartened by the multiracial coalitions of young people in California, many wearing masks and trying to socially distance, as they marched with their “Black Lives Matter” signs — and horrified by videos and eyewitness accounts of provocateurs methodically breaking windows and setting fires.

The speed and scale of the public outbursts have offered a dizzying kaleidoscope of images of a nation at war with itself. What you believe may dictate what you see. I mostly see crowds of peaceful protesters being determinedly undermined, where others see only hordes of looters stealing things.

We may each parse the protests differently, but we can’t say we weren’t warned 28 years ago, when the cops got off for beating Rodney King and giant swaths of Los Angeles burned.

And of all the lessons we might take from the carnage this time, the most important may still be the enduring “.”

My Nextdoor feed was buzzing for days with rumors of riots and gang members running amok in our suburban enclave. “I heard there is a plan for a Riot this afternoon!! Is this true???” one worried woman posted Monday morning.

That led to lots of back and forth about having guns at the ready in case “thugs” wander into the cul-de-sac. The vitriol was so intense the chastened organizer canceled the protest she’d planned.

I drove bythe site not expecting much. My neighborhood is as close to Trump Country as any place in Los Angeles could be. I imagined a few old hippies and bunch of college kids. Instead I found a gloriously diverse display of L.A. humanity.

They were white and brown and Asian and black; more than 350 people crammed onto the small traffic island we call Granada Hills Veterans Park. Most were young, enthusiastic and loud, but there were elderly folks who struggled with the request to kneel and young couples with little kids in tow.

The park’s landmark is a bronze statue of a small somber boy holding a folded American flag. There was something powerful about seeing him surrounded by folks of every colordemanding that black people be able to enjoy the freedoms that America promises.

And it wasn’t just the size and the spirit of the protesters that uplifted me, it was the endless stream of honks and thumbs up from cars that streamed through the busy intersection. And the signs that waved: “Black Lives Matter.” “I can’t breathe” “We will not change the world by asking nicely.”

Officials had prepared for the worst; there were police cars parked along the curb and the shopping center across the street had been shut down, its store windows boarded up.

The officers on duty said folks had been gathering for hours by the time I got there at 3. While I was there, the most substantial order they’d issued was “please stay on the sidewalks, not on the street.”

I’ve lived in this neighborhood for almost 35 years, and what I saw and felt as I surveyed the crowd moved me to tears. I spotted the Girl Scout cookies leader from our local school, a couple of my daughter’s college friends, the old couple who used to usher at my church. I don’t think I have ever felt such a sense of belonging — of being valuable — in my Northridge community before.

I imagine gatherings like this are going on all across our city. But we get wind of them only when order breaks down. It’s so easy to expect the worst of people we imagine are nothing like us.

But I realize now that I live in a neighborhood I only thought I knew. And if these young people can carry forth this new spirit of equality, maybe they can help renew our faith in our stumbling country and communities.

They’re demanding the justice that leads to peace.