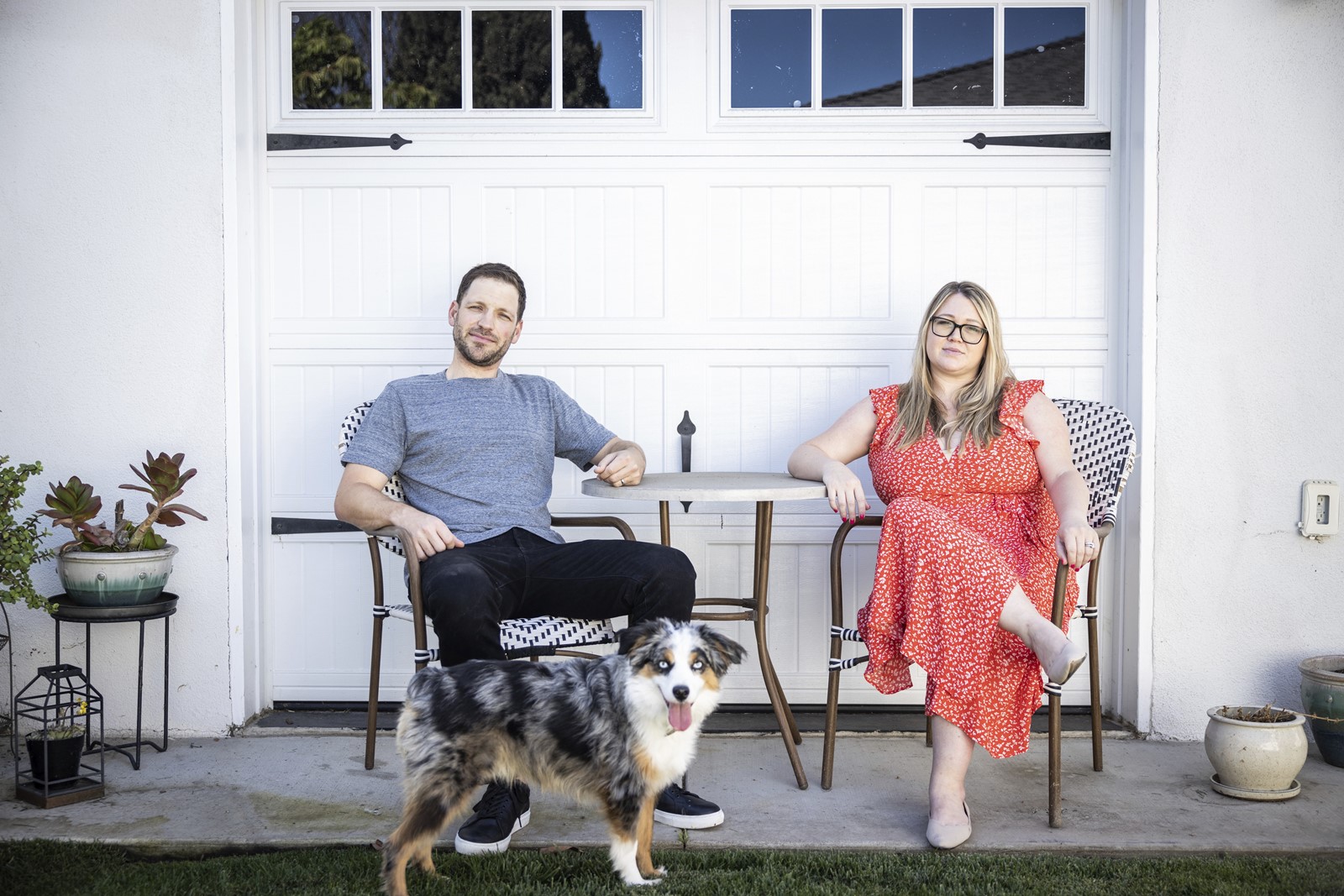 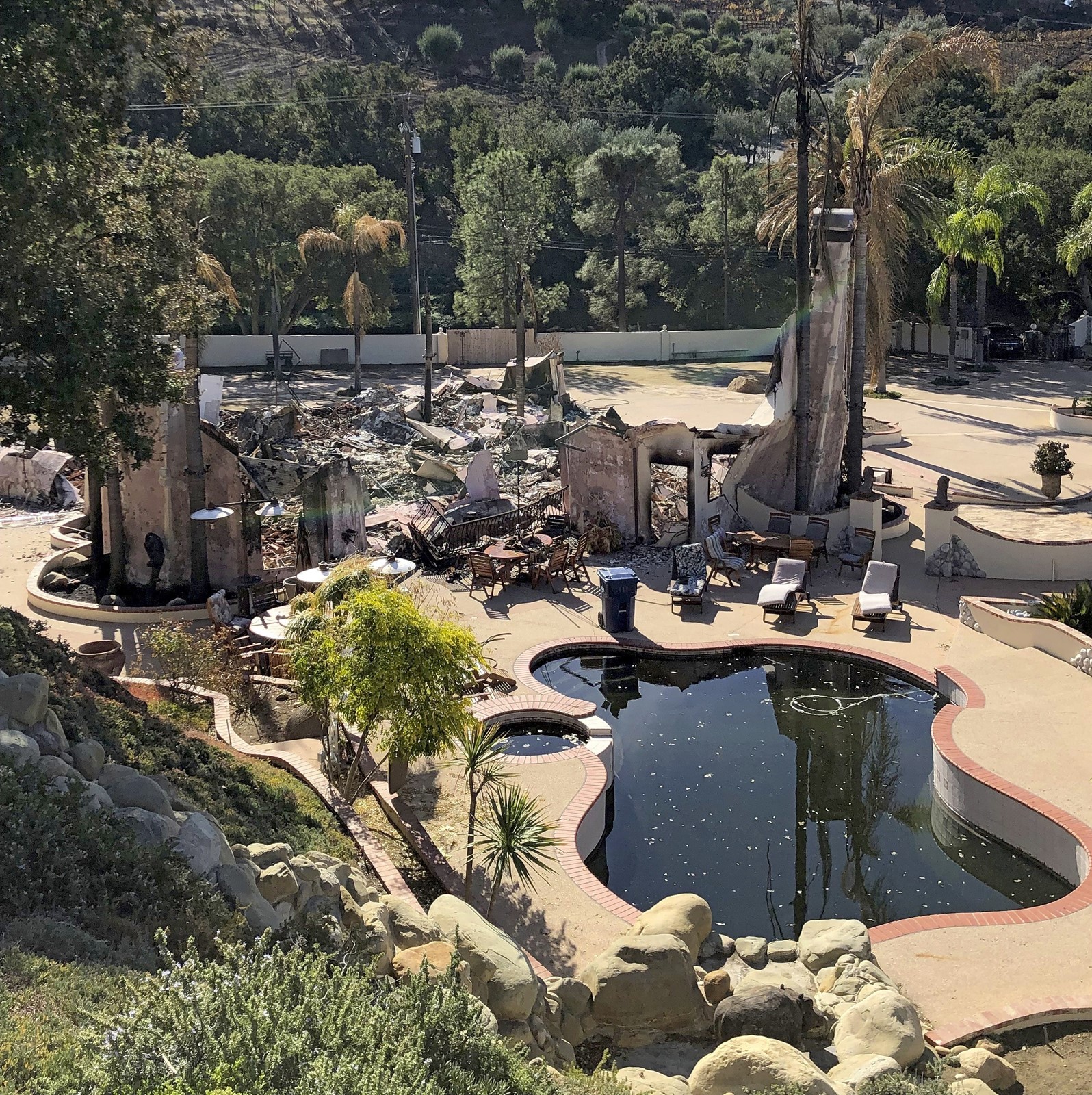 THOUSANDS of Airbnb rentals operate in California’s most hazardous fire zones. Above, the remnants of a rental home destroyed in the Woolsey fire. (Luke Humphreys )
PREVIOUS IMAGE

The cellphone began buzzing before dawn. Becca Rutledge looked outside and saw the orange glow of the Woolsey fire as it roared toward her family’s Airbnb rental home in the Santa Monica Mountains.

It was their host calling to tell them to evacuate because the fire was headed their way. They made it out safely, but the wildfire destroyed the house on Mulholland Highway in November 2018.

They had no idea the property was in a very high wildfire hazard zone or how to evacuate prior to their stay.

“It was so not on my radar to even be something to consider,” Rutledge, 32, said of the fire danger there. “Now I’ve got a different perspective.”

Across California, thousands of short-term Airbnb rentals operate in the state’s most hazardous fire zones, but the company does not provide warnings or evacuation information to guests when they make a reservation, a Los Angeles Times analysis has found. Some customers insist the company’s refund policy adds to the potential dangers.

Near catastrophes have spurred some cities and counties to require that short-term rental owners provide some sort of warning. But many don’t, leaving an uneven patchwork of local regulations and many renters ignorant of specific fire risks, or what to do when a wildfire erupts.

More than 23,000 California Airbnb listings were in wildfire-prone areas in January, accounting for about 20% of the company’s short-term rentals in the state, The Times’ analysis shows.

Eight of those rental properties were identified in high-risk fire zones around Laguna Niguel, where a fast-moving brush fire destroyed at least 20 homes last week, according to the analysis.

“Airbnb encourages hosts to think carefully about their responsibilities and how to be a responsible host, including practicing fire safety by having a functioning smoke alarm, meeting government safety guidelines and regulations for their area,” company spokeswoman Liz DeBold Fusco said.

During natural disasters, the San Francisco-based company sends emergency notices to potentially affected hosts and guests, pointing them to local government websites for guidance, she said.

Those criticisms reached a fever pitch last summer as the Caldor fire raged near Lake Tahoe. Some visitors who sought to cancel rentals nearby, citing the fire’s impacts on air quality and recreational activities, found the company was unwilling to issue refunds.

Fusco said Airbnb offered refunds for two months to customers affected by the Caldor fire who were covered by its “extenuating circumstances” policy, which allows for cancellations when unforeseen events including natural disasters arise after booking.

“To the best of our knowledge, Airbnb was the only large short-term rental platform offering extenuating circumstances refunds in connection to the fire,” she said.

Airbnb is the most used short-term rental company in the United States, accounting for more than half of bookings, according to a recent report by the travel research company Phocuswright.

The Times based its analysis on information collected by Inside Airbnb, a website that extracts data from Airbnb listings. The data are a snapshot of statewide listings that appeared on the site in January. The exact addresses of listings are anonymized by the rental company and the locations provided by Inside Airbnb are generally within 450 feet of the actual address, according to the site.

The Times’ analysis compared locations of short-term rentals to fire-prone areas, known as “very high fire hazard severity zones.” The fire severity zones are delineated in maps created by the Department of Forestry and Fire Protection in 2007.

They use a computerized model that considers terrain, vegetation and the location of past fires. The maps also identify areas where stricter building standards and brush clearance are required.

More than 1.1 million structures, or roughly 10% of buildings in California, were within the highest-risk fire zones in 2018, according to an analysis of the maps.

The vacation destination of Lake Tahoe had the highest share of properties at risk in the state. In surrounding El Dorado and Placer counties, more than 80% of short-term rentals were listed in the riskiest fire zones.

The vacation home rental ordinance in El Dorado County doesn’t address whether renters should be told that they are staying in a high fire hazard area or that they be informed of evacuation routes. These same rules apply to hotels and motels, according to a county spokeswoman.

In Placer County, vacation rental owners don’t have to share evacuation routes, according to county officials. But county rules do mandate that hosts post a “Good Neighbor Flier” in the unit that informs guests they are staying in a very high fire hazard area and how to sign up for safety notifications. Short-term rentals must also pass fire safety and defensible space inspections.

In Southern California, San Bernardino County had the highest percentage of rentals at risk, mostly in the resort towns of Big Bear Lake and Lake Arrowhead. The county led the state with 5,800 short-term Airbnb listings in the fire zone, or 60% of all listings.

The ordinance in the county doesn’t require short-term rental hosts to inform guests of the fire risk level or to provide their guests with evacuation instructions, according to a county spokesman.

The city of Los Angeles’ home-sharing ordinance says that hosts must say in online listings, and in notices posted on-site, that outdoor smoking is prohibited for rentals in the highest fire hazard zone. However, it doesn’t go beyond that, according to a planning department spokesman.

More than 16% of Airbnb listings in L.A. County were in the fire hazard area, the analysis found. About 200 of those were in areas of Malibu and the Santa Monica Mountains that were scorched by the Woolsey fire in 2018.

After the Woolsey fire destroyed more than 1,600 structures, the Malibu City Council adopted stricter regulations on short-term rentals, city officials said. Hosts are now required to post a code of conduct in rental units telling guests the city is located entirely within the highest fire hazard area. It also tells renters which evacuation zone the property is in, and lists a city website that provides evacuation information.

The rules were enacted to improve safety and to hopefully avoid the chaotic evacuation that gridlocked traffic on Pacific Coast Highway for hours during the Woolsey fire.

“There were people in the backups that were sure they were going to burn to death in their cars,” Malibu Mayor Paul Grisanti said.

In the Lake Tahoe region, the town of Truckee provides even stronger protections for rental guests.

Short-term rental operators must post an evacuation map on-site, as well as a flier that notifies guests they’re staying in a high-risk area for fire and tells them how to sign up for emergency alerts. Rentals must be inspected for fire safety and defensible space once every three years and upon request by the town or fire protection district.

Also, rentals in areas with inadequate cellphone coverage must contain a working landline or an internet-connected phone for emergency communications.

The town approved its short-term rental ordinance in fall 2020, when Truckee saw a large increase in both visitors and new residents due to the COVID-19 pandemic. It also became necessary as wildfires have become more frequent, said Colleen Dalton, chief executive of the local tourism authority, Visit Tahoe-Truckee, which helped develop the ordinance.

Four days before his trip, the Caldor fire erupted along the Middle Fork of the Cosumnes River, roughly 50 miles from the rental property.

Although the massive wildfire would remain more than 20 miles from Edwards’ cabin and on the opposite side of Lake Tahoe, the skies still turned hazy and orange, with smoke obscuring the view of Tahoe’s famously clear waters. The air quality ranged from very unhealthy to hazardous, and tourism officials pleaded with visitors to stay away.

So Edwards was surprised when he reached out to Airbnb a couple of days before the trip and was eventually told, after much back and forth, that the $2,432 he and his friends paid to book the cabin would not be refunded if they chose not to go.

“They’re drawing people into a dangerous situation when they don’t really understand what the risk that’s developing is,” he said.

Airbnb’s extenuating circumstances policy allows for cancellations due to unforeseen events including states of emergency and natural disasters.

The company never provided Edwards and his friends with a satisfactory explanation for why their stay wasn’t covered, he said.

However, Fusco said the Tahoe rental property was in an area not eligible to receive a refund under the company’s policy. She said the company uses a “third-party” contractor to decide which areas qualify for refunds but wouldn’t elaborate on how those areas were defined.

Edwards, 30, ended up staying home. He and five of his friends plan to sue Airbnb in small-claims court.

He faulted the company for not requiring hosts to provide information about fire danger and potential escape routes. Unbeknownst to him, the cabin was in a zone with the highest risk.

“They should be providing evacuation details, especially for people who are not familiar with the area and if the worst happens, they’re not going to have much of an idea of what to do and where to go,” he said. “You can get horrific scenes like those around Paradise where people are just driving through flames licking the sides of the roads.”

Rutledge’s family booked a stay in the Santa Monica Mountains for the weekend when she was to be married at Cielo Farms, a vineyard just across Mulholland Highway from the ill-fated Airbnb rental.

The home was in an unincorporated part of L.A. County, an area where owners are not required to warn guests about fire dangers. Her older sister, Emily McKnight, visited from Oakland and rented an Airbnb home in Westlake Village with her family and friends.

The Woolsey fire ignited on Nov. 8, near the Santa Susana Field Laboratory in Ventura County. By 11 p.m. the fire forced McKnight’s family and friends to evacuate and head south to the second rental on Mulholland Highway.

They arrived sometime after midnight, said McKnight, 34. They got several hours of sleep until the cellphone rang, she said.

“You could look outside and see the orange glow,” McKnight said. “It was like, ‘Oh, the fire is really close. We have to get going.’ ”

After fleeing, the sisters found lodging for 25 evacuated friends and family members at a hotel in the South Bay. Airbnb charged them for the night they had already stayed, but refunded the remaining amount, McKnight said.

They also managed to find a last-minute wedding venue at the Rolling Hills Country Club, and Rutledge, of Westchester, was married that weekend.

After the wedding, Rutledge saw the images of the burned-out structure on Mulholland where they had stayed just a few days before.

“I think that’s really when the guilt set in,” she said. “I was just like, ‘Oh, my God, what if? What in the world did I do to put my family in this situation that they could have been in that house?’ ”