Frustrations at the ballot box 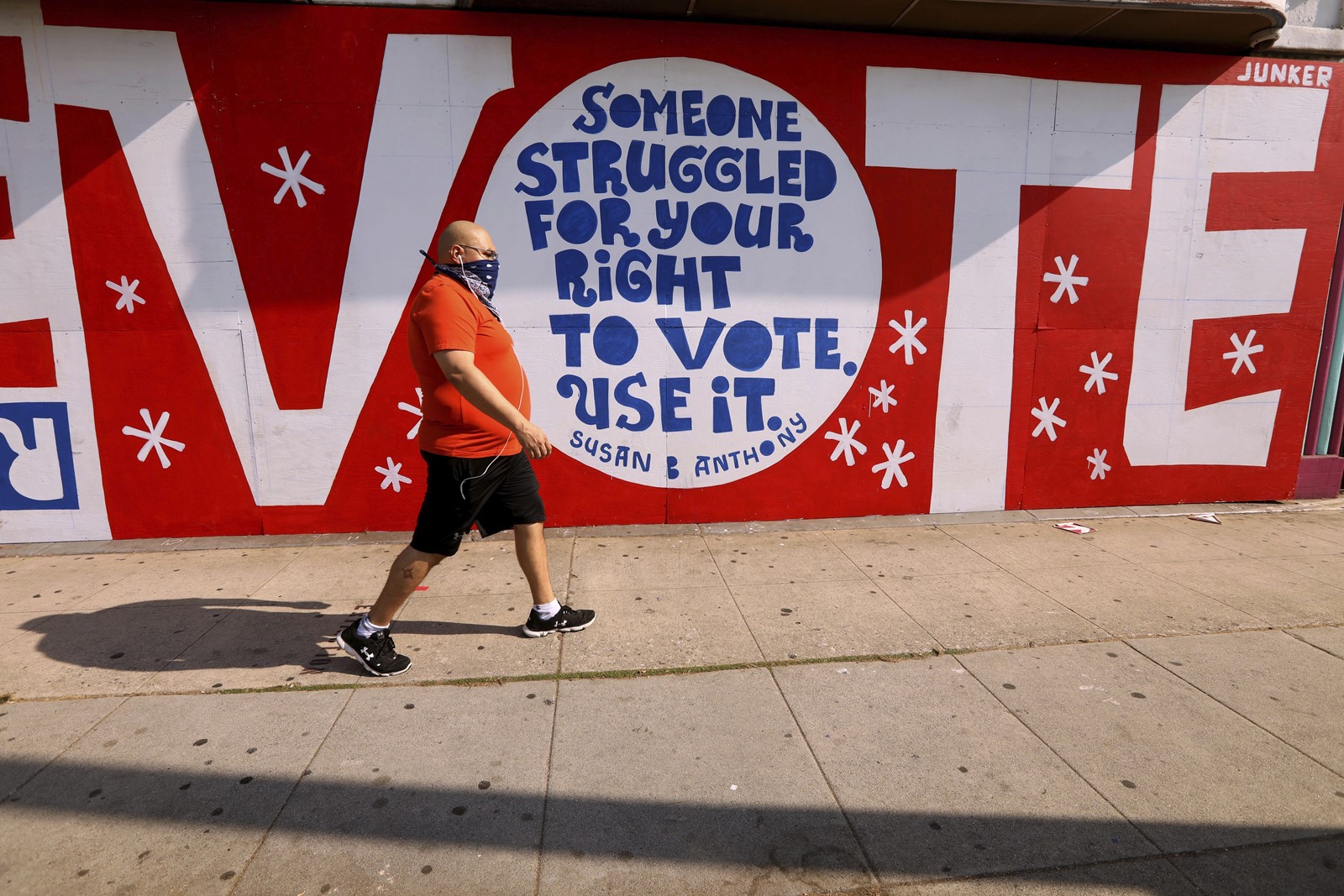 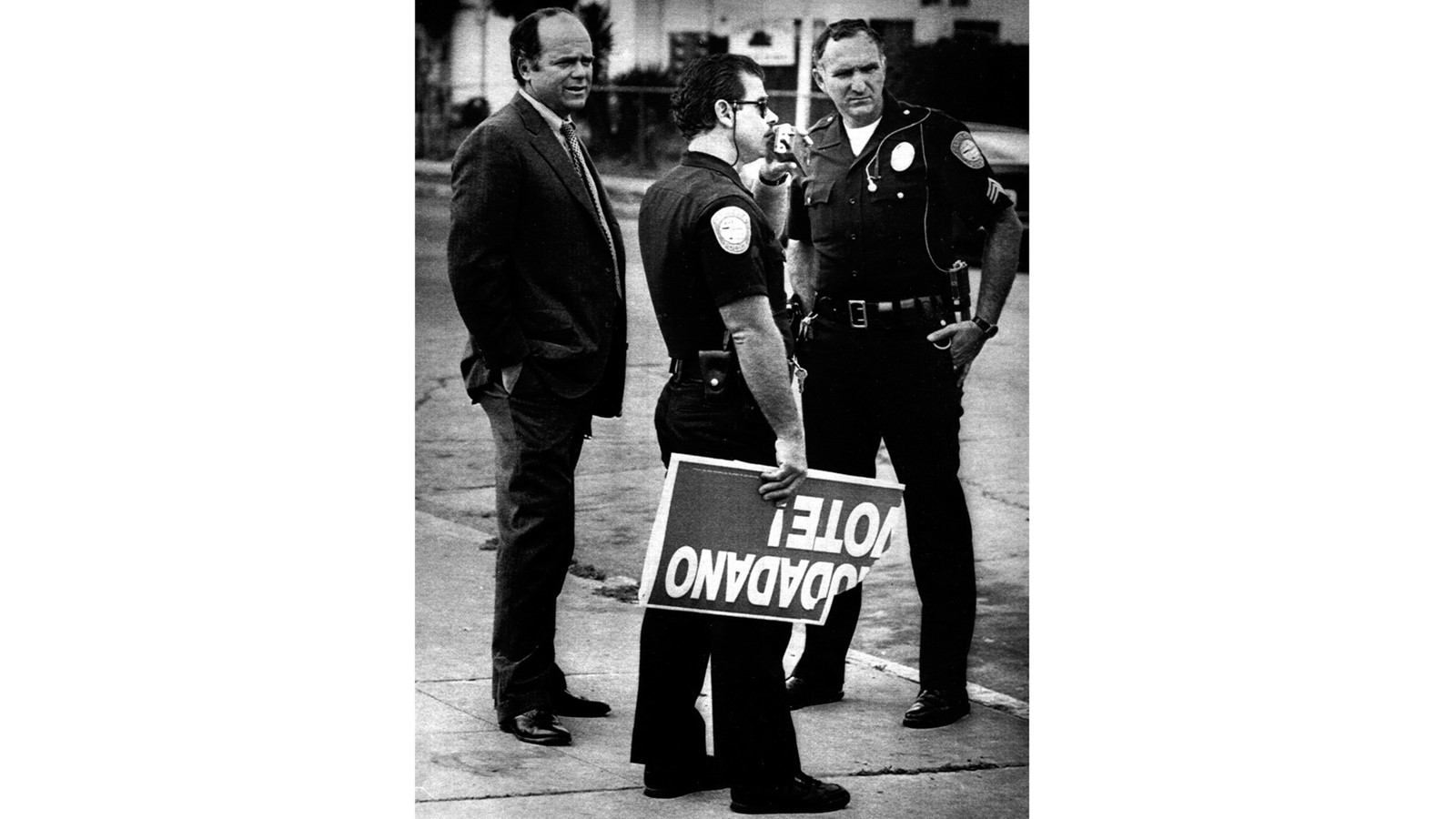 A POLICE OFFICER holds part of a sign seized at a polling site in Santa Ana in 1988, when uniformed guards were stationed at 20 polling stations in the city by Republican Party officials. (Mark Boster Los Angeles Times)
PREVIOUS IMAGE

Their Republican bosses gave the uniformed security guards one task on election day: Scare away people from voting during a tight, crucial race.

They stood with arms crossed behind ballot boxes, asked for ID from confused voters outside polling places and wrote down license plate numbers. Some held signs in English and Spanish that read “Non-Citizens Can’t Vote.” Others just glowered.

The move caused a national uproar. But the GOP officials who orchestrated it didn’t care.

They claimed the actions were “honorable” and done to protect the “sanctity of the ballot” because they heard rumors that Democrats planned to rig the election by dropping off busloads of undocumented residents at voting booths.

This is the Donald Trump playbook for Nov. 3, according to the vow he made during his first presidential debate against Democratic candidate Joe Biden.

“I’m urging my supporters to go into the polls and watch very carefully,” he snarled when moderator Chris Wallace asked if Trump pledged not to declare victory until the election was independently certified. “That’s what has to happen” because “they” — he didn’t specify who, but it was obviously Democrats — “cheat.”

But it was also the voter suppression that happened in Orange County on Nov. 8, 1988.

That morning, 20 goons hired by the local Republican Party spread across Santa Ana. They haunted voting spots with special meaning to the city’s Mexican community: a Catholic church. A Boys & Girls Club. A senior center.

The tactic was designed to help Curt Pringle, a Republican running for a vacant Assembly seat that year. By the time FBI agents chased off the rent-a-cops, their job was done: The drapery-store worker won his race by fewer than 1,000 votes.

The sordid episode crossed my mind almost as soon as Trump issued his cynical call for electoral eagle eyes.

Trump, like the O.C. GOP back then, is trying to sow distrust in an election that’s also a referendum on diversity.

In 1988, Republicans tried to prevent Latinos — long the most maligned ethnic group in Orange County — from gaining a political foothold in central Orange County.

Their triumph was Pyrrhic: Latinos organized to eventually beat Pringle in 1990. Those battles helped Loretta Sanchez topple longtime Congressman Bob Dornan — a Trump before Trump — in 1996.

And that was the first domino that fell in a political chain reaction that culminated with Orange County electing an all-Democratic congressional delegation in 2018 for the first time ever.

What Trump is proposing is something far more grandiose — and sinister. His poll watchers wouldn’t merely be a handful of hired guns to lounge around. He’s calling for legions to, as he proclaimed, “go into the polls.”

It would make what Orange County did look tame by comparison.

Back then, Pringle’s camp pulled a bully move on a fast-growing minority and thought they could get away with it.

Today, Trump’s people want to intimidate anyone who doesn’t pledge fealty to MAGA and know they’ll have the backing of the commander-in-chief.

Back then, Gov. George Deukmejian — a Republican — signed a bill in the wake of the poll-guard scandal that outlawed security guards from standing closer than 100 feet from polling booths.

On Tuesday, Trump asked the alt-loser Proud Boys to “stand by” for heaven-knows-what.

Back then, more than a few prominent Republicans blasted their party over what they characterized as a travesty of democracy.

Santa Ana City Council member John Acosta claimed it “smack[ed] of Nazism” and that “the dignity of the Republican Party has been damaged beyond belief.”

Raoul Silva, a member of the California Republican Central Committee, described the gambit as “a public lynching.”

Orange County Supervisor Gaddi Vasquez — who just months earlier gave remarks at the Republican National Convention that marked him as the party’s Great Brown Hope — said he was “extremely disappointed” at the “tremendous lapse in judgment.”

Today? Well, today those pangs of conscience from GOP officials seem like relics from a distant and almost quaint past.

You don’t even hear the conservative crickets because of Trump’s brays. But also because Republicans have tethered their future and their political soul to this president with caudillo tendencies. He’s their guy. And they are his eager apostles.

He was a federal prosecutor based in Orange County at the time and received multiple phone calls the day of the 1988 general election about thugs threatening voters. He initially dismissed them as just the usual “weird reports” that partisans toss around on election day that almost always don’t turn out to be true.

Once the FBI confirmed the allegations, Umberg and a colleague went down to Santa Ana High School. From 50 yards away, they saw a woman holding a “huge sign” that warned non-citizens to stay away. A Latino couple approached the high school, looked at the woman, and returned to their cars.

“So we walked toward the woman, and she looked at us,” he said via phone. “She dropped her sign and then ran away.”

Umberg — who currently serves as chair of the state Senate Elections and Constitutional Amendments Committee — was so enraged that he ran for office two years later to handily beat Pringle.

“This is the kind of stuff that goes on in autocracies,” said the retired U.S. Army colonel. “Screwing around with the electoral process is a very personal thing to me. I served in Afghanistan. People were literally dying to vote.”

He especially worries about first-time voters who don’t know all the vagaries of election law and that not just anyone can be a poll watcher. People who might decide not to vote out of trepidation.

“Whether the president’s words are intentional or not,” Umberg said, “the consequence is to impact the vote.”

Pringle — who has long denied any involvement in the 1988 poll-guard controversy — didn’t return a request for comment.

We need to hear more from people like Umberg, people who know what actual rigged elections and voter suppression look like. We need to hear stories like what happened in Orange County 32 years ago, to never forget that politicians will take any chance to disenfranchise communities of color.

But if you want me to tell you there was a completely happy ending to what happened in Orange County … I can’t.

Although six plaintiffs ultimately won more than half a million dollars in civil settlements from the Orange County and California Republican Party, no criminal charges were ever filed by local, state or federal officials.

Pringle did lose his seat to Umberg in 1990, but he won in a different district two years later and eventually became California’s speaker of the Assembly, the last Republican to hold that seat.

Even worse? Pringle became Anaheim’s mayor in 2002 with the help of some of the very Latino leaders who once wanted him canceled.

But here’s the thing: This column itself is a rehash of a story my colleague Kurtis Lee wrote four years ago. Back then, candidate Trump asked his fans to serve as observers on election day to fight what he was already calling a “rigged” election — one he ended up winning.

He’s still belting out the same fearful tune because Trump knows it works, just like the O.C. GOP knew back in 1988.

But this tide that tries to crash against the walls of our democracy again and again can be beaten back with the most potentially effective and powerful tool the U.S. Constitution gave us: