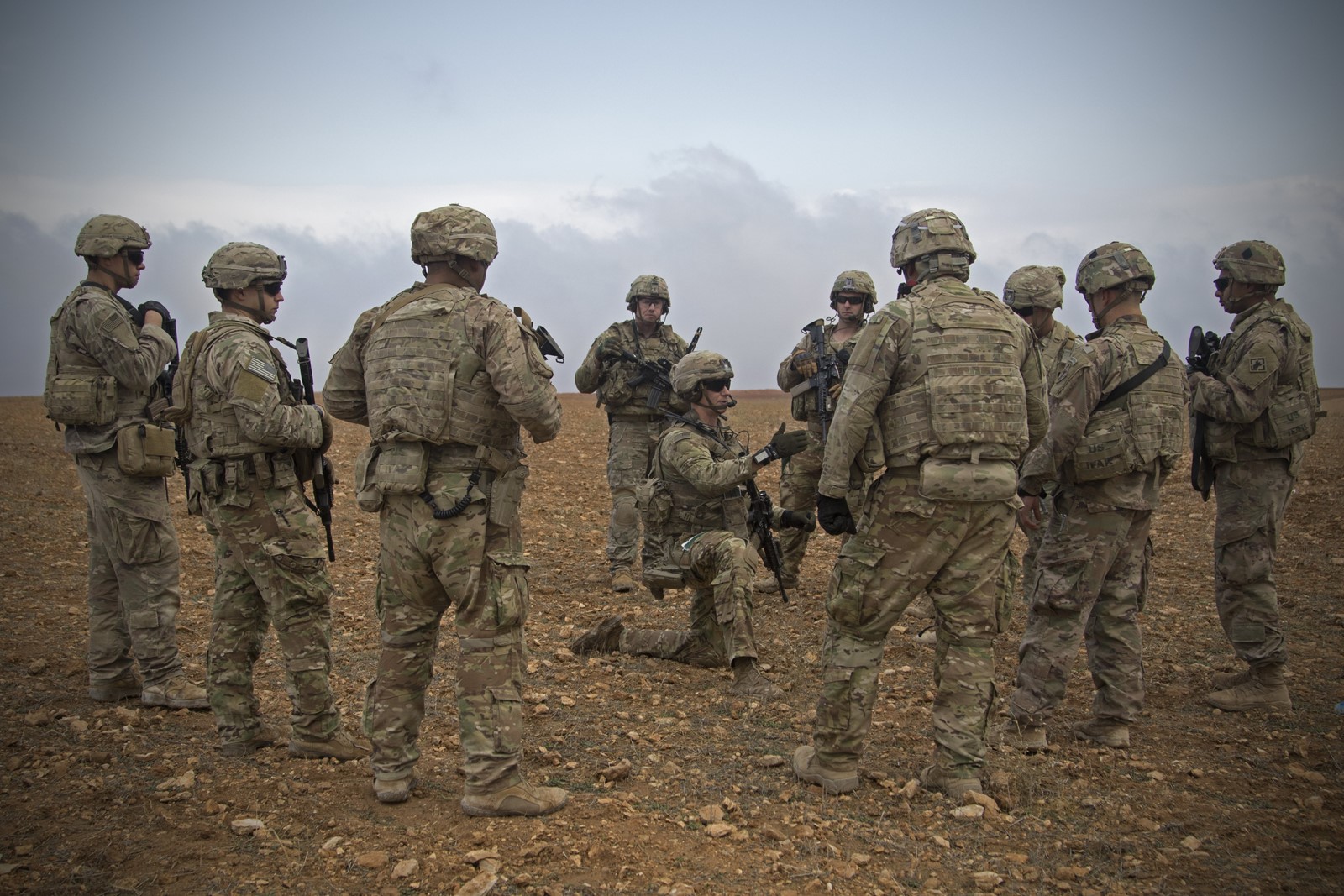 Trump abruptly announced the move late Sunday without consulting top Pentagon or State Department advisors, sparking a cascade of warnings that withdrawing even the token U.S. force — up to 100 special operations troops — will allow Turkey to launch a long-planned military operation aimed at eliminating the Kurdish fighters long backed by Washington, the officials warned.

Without U.S. support, the Kurdish fighters who form the bulk of the U.S.-led coalition fighting Islamic State are expected to shift to fighting Turkish troops and to release some of the 12,000 Islamic State fighters they now hold in camps, the U.S. officials warned. The militant group has lost its territory but could pose a potent threat if reinforcements return.

Trump portrayed his decision as fulfilling his pledge to disentangle America from what he called “ridiculous, endless wars,” especially in the region’s ethnic and sectarian conflicts. But the political backlash in Washington was swift, harsh and bipartisan.

“A precipitous withdrawal of U.S. forces from Syria would only benefit Russia, Iran and the Assad regime. And it would increase the risk that ISIS and other terrorist groups regroup,” said Senate Majority Leader Mitch McConnell (R-Ky.), normally one of Trump’s staunchest allies. (Islamic State is also known as ISIS.)

“As we learned the hard way during the Obama administration, American interests are best served by American leadership, not by retreat or withdrawal,” he added.

Trump later appeared to issue a stark warning to Turkey, although for what was unclear. “If Turkey does anything that I, in my great and unmatched wisdom, consider to be off limits, I will totally destroy and obliterate the Economy of Turkey,” he tweeted.

Trump spoke by phone with Turkey’s president, Recep Tayyip Erdogan, on Sunday. After the call, acting White House Chief of Staff Mick Mulvaney called Defense Secretary Mark Esper to advise him of the president’s decision to withdraw from the border, a U.S. official said.

Later Sunday, the White House announced that the U.S. would not interfere with Turkey’s plans to send troops into Syria to battle Kurdish fighters arrayed near the border, saying American forces would “no longer be in the immediate area.”

The White House statement said Turkey would “be responsible” for all Islamic State fighters captured over the last two years. The statement did not suggest how, when or where Turkey would take custody of the thousands of militants held by the Kurds.

But in a sign of the chaos, Erdogan said at a news conference in Ankara that the United States “is working to decide how to handle” the prisoners. Erdogan also said he plans to visit Washington in mid-November to discuss the “depth of the operation,” according to a Turkish newspaper, Daily Sabah. The White House declined Monday to confirm the visit.

By early Monday, American forces had begun evacuating from the border towns of Ras al-Ayn and Tal Abyad to positions outside the roughly 18-mile-wide security zone they had been patrolling, officials said.

Administration and White House officials scrambled to stem the fallout, insisting that Trump had not given Erdogan a green light to invade Syria.

“The Department of Defense made clear to Turkey — as did the president — that we do not endorse a Turkish operation in northern Syria,” Pentagon spokesman Jonathan Hoffman said in a statement. “We will work with our other NATO allies and coalition partners to reiterate to Turkey the possible destabilizing consequences of potential actions to Turkey, the region and beyond.”

Turkey has built up its forces along the Syrian border and taken other steps indicating it plans to launch an incursion into northern Syria, perhaps in the next few days, according to a U.S. official familiar with the latest U.S. intelligence assessments.

Ankara has said it wants a 20-mile-wide “safe zone” along the border to combat what it described as Kurdish terrorists and to resettle some of the 3.6 million refugees it has hosted since the Syrian civil war erupted in 2011.

Pentagon officials are seeking to persuade Turkey to keep its troops from moving more than a few miles into Syria, instead of carving out a wider tract. In that case, Kurdish fighters probably would rein in counterattacks on Turkish forces, said the officials, who spoke on condition of anonymity to discuss internal assessments.

“If there’s a limited incursion, there could be a limited response,” said a U.S. official.

Trump has long sought to remove U.S. troops from Syria, even announcing a total pullout in December. He backed down after Defense Secretary James N. Mattis resigned in protest and White House advisors warned that too fast a withdrawal would let Islamic State regroup.

About 1,000 U.S. troops are deployed in the country. Although Islamic State lost its last bit of territory in March, the Pentagon has maintained a presence for counter-terrorism operations and to prevent the Syrian government and its Iranian ally from taking over.

After Islamic State emerged in 2014, seizing a third of both Syria and Iraq for its so-called caliphate, Kurdish militias became the most dependable U.S. partners in Syria under both the Obama and Trump administrations.

The Kurds quickly carved out a self-administered enclave in northeastern Syria that U.S. officials touted as an alternative to the autocratic government of Syrian President Bashar Assad, who is backed by Iran and Russia in the country’s civil war.

Trump’s pullout was “a stab in the back,” Kino Gabriel, a spokesman for the Syrian Democratic Forces, the U.S.-backed Kurdish force, told Jordan’s Al Hadath TV.

The SDF said in a statement that any Turkish operation in northern and eastern Syria would have “a huge negative effect” on the war against Islamic State.

Turkish troops are unlikely to reach Al-Hol, the main Kurdish-run detention center. Located about 50 miles south of the border, it holds an estimated 70,000 Islamic State family members and sympathizers.

The Kurds also are holding about 2,000 foreign fighters who had joined Islamic State and were captured on the battlefield, as well as 10,000 Iraqi and Syrian members of the group, Pentagon officials say.

A major battle with Turkey is liable to pull SDF fighters away from guarding the detention centers, however.

The U.S. troops in Syria are not a large enough force to take custody of the detainees from the Kurds, or to prevent an Islamic State resurgence if they are set free in large numbers, U.S. officials said.

Without the Kurds, “we will no longer have a partner” to fight Islamic State, said an official involved in Syria policy.

Trump’s decision could garner support from his political base, which backs his efforts to end America’s foreign wars and stand up to the national security establishment, especially if Islamic State does not surge back anytime soon.

But it generated a torrent of opposition from Republican lawmakers on Capitol Hill — allies Trump needs as House Democrats head toward a potential impeachment vote over his efforts to get Ukraine to investigate former Vice President Joe Biden, who is running for president.

Some of Trump’s closest allies criticized the move as a misguided pullout comparable to then-President Obama’s decision to pull out of Iraq in late 2011, a move that left a security vacuum that Islamic State later exploited.

The Trump pullback gave Republicans — who do not support impeachment but have largely remained silent as new allegations of wrongdoing have emerged — ample opportunity to show they can be critical of the president.

“I like President Trump, I’ve tried to help him. This to me is just unnerving to its core,” said Sen. Lindsey Graham (R-S.C.), one of Trump’s strongest allies on Capitol Hill. “To say to the American people ISIS has been destroyed in Syria is not true.”

“This decision ignores lesson of 9/11,” she said on Twitter. “Terrorists thousands of miles away can and will use their safe-havens to launch attacks against America.”

Graham said he would prepare a Senate resolution, or perhaps two, urging Trump to reconsider his decision and threatening sanctions on Turkey if its troops enter northeastern Syria.

He predicted that Congress would approve them by a veto-proof margin, a potential embarrassment for Trump, although a resolution would not change policy.

Even some of Trump’s former administration officials were critical of the decision.

“We must always have the backs of our allies, if we expect them to have our back,” said Nikki Haley, former U.S. ambassador to the United Nations. “The Kurds were instrumental in our successful fight against ISIS in Syria. Leaving them to die is a big mistake.”

Republicans who have grown accustomed to Trump retreating under fire are hoping he may back down again on Syria.

“If the president sticks with this retreat, he needs to know that this bad decision will likely result in the slaughter of allies who fought with us, including women and children,” said Sen. Ben Sasse (R-Neb.). “I hope the president will listen to his generals and reconsider.”

The only Republican who publicly backed Trump’s decision was Sen. Rand Paul (R-Ky.), an ardent opponent of U.S. involvement in foreign wars. Paul said he supported Trump “as he once again fulfills his promises to stop our endless wars and have a true ‘America first’ foreign policy.”

Amid the opposition from Republicans, Trump defended his decision and pushed back on the idea that he had taken Turkey’s side against the Kurds long backed by Washington.

“I’m not siding with anyone in Syria,” Trump told reporters at the White House.

“Syria was supposed to be a short-term hit, just in and out,” he said. He said the continued containment of Islamic State should fall to countries in the region.