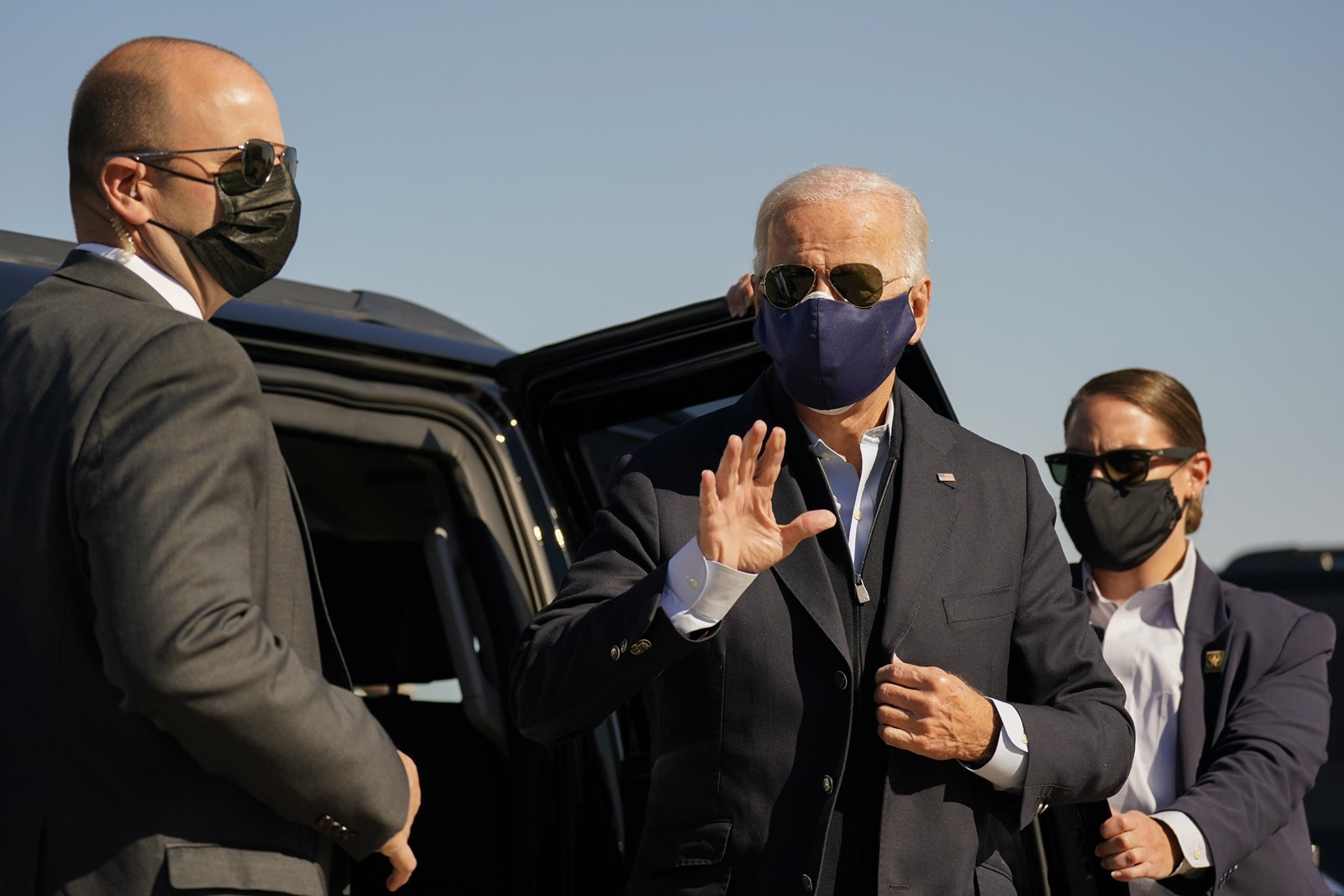 In the homestretch of the presidential campaign, with the U.S. coronavirus caseload trending ominously upward, the rival campaigns of President Trump and Joe Biden more than ever are providing a clash of contrasts on how to contain COVID-19 and tend to the virus-battered economy.

That was evident in their own actions over the weekend, and in the statements of their surrogates. With the election over in 15 days and voting underway in all 50 states, the country is entering “the most difficult phase of this epidemic,” said Dr. Scott Gottlieb, a former commissioner of the Food and Drug Administration under President Trump, now a critic of his response.

“I think the next three months are going to be very challenging,” he said Sunday on CBS’ “Face the Nation,” adding, “There’s really no backstop against the spread that we’re seeing.”

Channeling Trump, who has falsely insisted to his mostly unmasked supporters at rally after close-packed rally that the country is “turning the corner,” his surrogates and aides on Sunday’s interview shows professed optimism. They touted near-term prospects for vaccines, praised the president’s virus-fighting efforts over the last eight months and declared, despite daily evidence to the contrary, that people around Trump conscientiously adhered to disease prevention protocols.

Biden and his partisans continued to condemn Trump’s coronavirus response as catastrophic, pointing to a nationwide death toll nearing 220,000 and more than 8 million cases of infection. They expressed incredulity over the personal carelessness of the president, who was only recently hospitalized for the illness, in adhering to basic health measures, and said no broad economic recovery was possible until the virus was under control.

At a “drive-in rally” on Sunday at a high school in Durham, N.C., where supporters sat in their cars as a pandemic precaution, Biden castigated Trump for refusing “to follow the science” on wearing masks to slow the virus’ spread and slammed him for suggesting the nation had rounded the turn toward recovery.

“As my grandfather would say, this guy’s gone around the bend if he thinks we’ve turned the corner,” Biden said, drawing supportive honks from motorists in the dozens of vehicles. “Turned the corner?” he continued. “Things are getting worse.”

Trump, who has vowed to spend every day between now and Nov. 3 campaigning, including in states with perilously high infection rates, again incorrectly claimed on Twitter that the U.S. had such a high caseload “because it TESTS at such a high (and costly) level.” Experts say testing alone does not explain the renewed surge in cases, and they note that the nation also has among the highest rates of hospitalization in the world.

Underscoring the gulf between his administration and public health authorities, Trump’s relatively new science advisor, Scott Atlas, tweeted that masks do not help stem the virus’ spread — a claim so at odds with research that Twitter on Sunday blocked his post. Atlas’ own views on addressing the pandemic amount to “pixie dust and pseudoscience,” said Michael Osterholm, a leading infectious disease specialist, on NBC’s “Meet the Press.”

Trump’s raucous rallies, including three over the weekend, in Michigan, Wisconsin and Nevada, are in stark contrast to Biden’s campaigning at fewer and smaller events, always observing precautions. Trump rarely wears a mask or keeps his distance from people, and mocks Biden for doing so, despite polls showing a large majority of Americans disapprove of his handling of the pandemic.

At a tightly packed rally in Carson City, Nev., on Sunday, Trump belittled his opponent for his caution, asserting that Biden, as president, would lock down the country. “He’ll listen to the scientists,” Trump said in a derisive tone. “If I listened totally to the scientists, we would right now have a country that would be in a massive depression.” Instead, “we’re like a rocket ship,” he added, misrepresenting the state of an economy in which business closings and job losses remain high.

Senior Trump campaign advisor Jason Miller said the president’s experience with the infection pointed up the flaws of the preventive measures counseled by public health professionals. He claimed on “Fox News Sunday,” against evidence to the contrary, that Trump was “frequently” around people who wore masks and had been tested — “and somehow, he still got COVID.”

Michigan’s Democratic Gov. Gretchen Whitmer, whom Trump attacked again at his Michigan rally Saturday night for her pandemic-related restrictions, said the president’s politicization of the virus response had seriously hampered states’ efforts. “This is a public health crisis. It should not be a partisan moment. And yet he has made it that way to deflect from his administration’s inability to get their arms around it,” she said on “Meet the Press.”

Trump assailed Whitmer on Saturday before thousands of Michigan voters for the very actions that had made her the recent target of a foiled plot by right-wing extremists to kidnap her and overthrow her state’s government. She said the president’s incendiary rhetoric amounted to “inciting domestic terrorism.”

The president’s daughter-in-law, Lara Trump, appearing as a senior campaign aide on CNN’s “State of the Union,” said the president was “having fun” when the crowd chanted “Lock her up!” after his comments about Whitmer. She said, “you’re hearing people’s frustration” over coronavirus constraints at rallies, and that Trump was simply acknowledging that sentiment.

“He wasn’t doing anything, I don’t think, to provoke people to threaten this woman at all. He was having fun at a Trump rally,” she said.

Democratic Sen. Chris Coons of Delaware, a close Biden associate who replaced him in the Senate, pushed back against Lara Trump’s response in a separate interview on CNN: “If that means that, for our president, ‘fun’ is fueling division and encouraging folks to say and do things that are threatening and completely inappropriate, well, that’s a reminder of what kind of president we currently have — in sharp contrast to Joe Biden, someone who can and will bring our country together.”

Miller, the Trump advisor, retorted, “Not at all,” when asked whether the president regretted his comments. He then reiterated Trump’s criticism of the governor’s shutdown measures, though they have been consistent with guidelines from the Centers for Disease Control and Prevention.

“People in Michigan want to get their state opened back up,” Miller said. “They feel they — it’s been way too heavy of a hand — it’s hurting their economy.”

Exasperated Democratic officials countered that the Trump-led resistance to disease mitigation efforts was the biggest impediment to getting the economy back on track.

“Frankly, the president has made it nearly impossible for states to open up any more than they are now,” Illinois Gov. J.B. Pritzker said on CNN. “This pandemic has been around now for seven to eight months. And without much help from the federal government, we have been fighting it off.”

Although Trump no longer predicts the U.S. will have a vaccine by the election, Health and Human Services secretary Alex Azar said one or more were coming soon.

“We’re so close. Hang in there with us — we are so close,” Azar said on “Meet the Press.” “We are weeks away from monoclonal antibodies for you, for safe and effective vaccines.”

Gottlieb, the former FDA commissioner, put forth a more conservative timeline, saying that even if companies file applications for approval by late November, a long road lies ahead. Gottlieb sits on the board of Pfizer Inc., one of the pharmaceutical companies working on a vaccine.

“It’ll take the FDA two to four weeks to turn that application around,” he said. “Then it will take us another two to four weeks to get the initial tranche of people — the most vulnerable who are indicated for the vaccine — vaccinated. Then they need to get a second dose, and that happens in the next three to four weeks. And then it takes two weeks for the immunity to really kick in.

“So you’re looking at a situation where the first tranche of people to get vaccinated really won’t be protected from the vaccine probably till February and maybe March,” he said. “And so that’s a long way off.”