Why the Supreme Court battle has Democrats focusing on documents 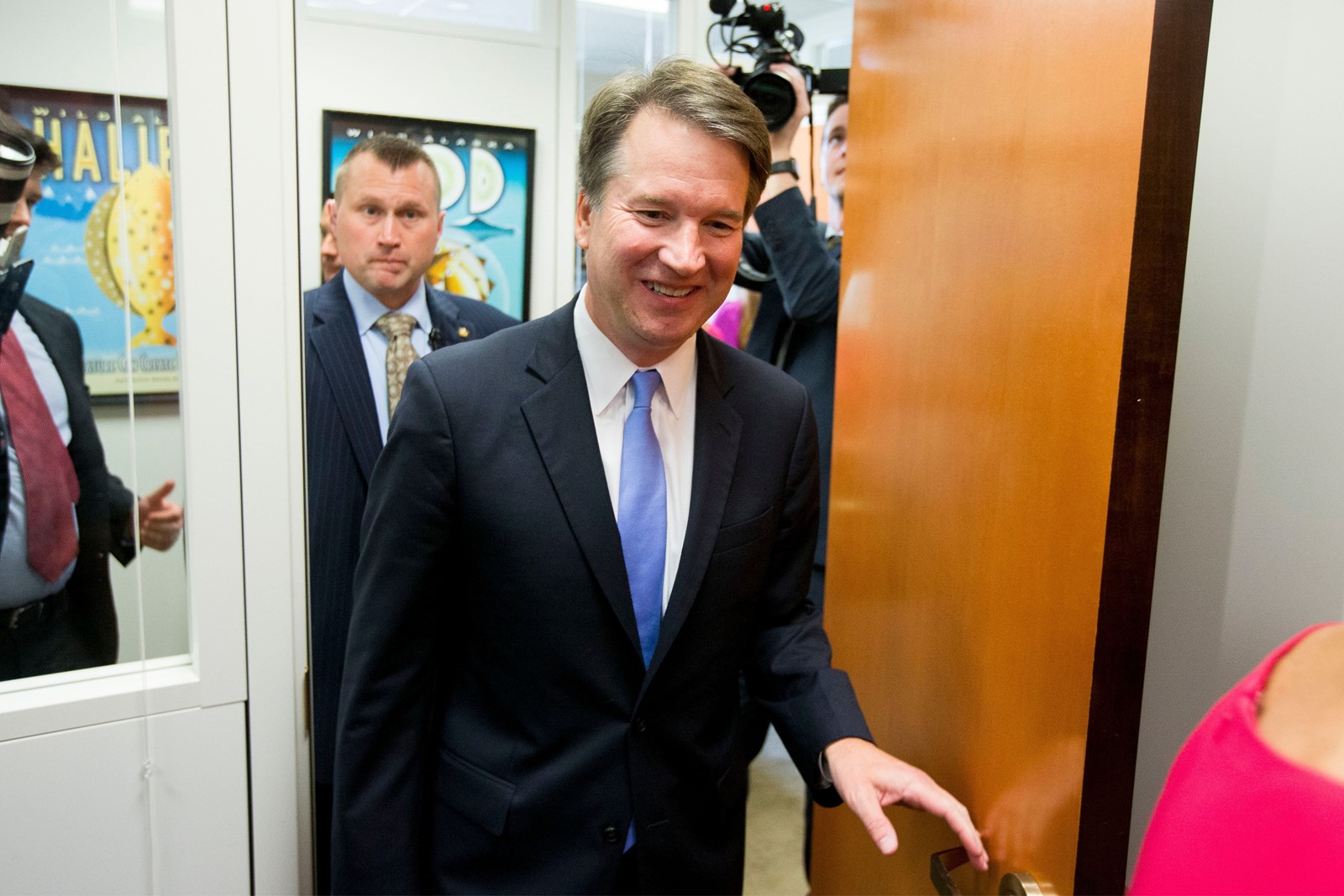 Senate Democrats’ strategy for defeating President Trump’s Supreme Court nominee has largely relied on getting the public to care about a procedural fight over millions of pages of archived documents.

It’s a surprising, somewhat arcane topic to zero in on, particularly given the issues many thought would dominate the fight over Judge Brett Kavanaugh’s nomination — such as abortion, Obamacare, immigration, executive power and whether a president is subject to a subpoena.

But to the consternation of some Democratic activists, Senate Minority Leader Charles E. Schumer (D-N.Y.) and ranking Judiciary Committee member Dianne Feinstein (D-Calif.) have focused much of their attention on a battle over Kavanaugh’s White House records.

Democrats want to review millions of pages before voting, including documents from Kavanaugh’s stint as staff secretary in the George W. Bush White House, and have threatened to sue if they don’t get the papers through a Freedom of Information Act request. Republican leaders are moving ahead with a much more limited release, hoping to seat Kavanaugh by the court’s opening in October.

Elizabeth Beavers, associate policy director of Indivisible, a liberal anti-Trump group, says Democrats’ focus on the bureaucratic process for releasing documents is unlikely to inspire the kind of public backlash needed to block or slow a nomination that the GOP is intent on pushing through.

“Chuck Schumer is bringing a FOIA request to a knife fight,” Beavers said. “Most ordinary constituents are not enraged and spurred to action by process.”

Democrats say they will focus on Kavanaugh’s judicial record closer to his confirmation hearings, slated to begin Sept. 4, and activists are gearing up for protests on social issues like abortion as early as this weekend. But with 10 days to go, they haven’t pivoted from the document fight.

Feinstein’s social media outreach has focused on the documents: Of 59 tweets sent about Kavanaugh in August, 49 have been about the fight over the records.

But there’s been talk by senators about abortion rights, healthcare and whether a president under investigation should pick a justice. That line of argument picked up steam this week with the guilty pleas by former Trump attorney Michael Cohen and the conviction of Trump’s former campaign manager, Paul Manafort.

Senate Majority Whip John Cornyn (R-Texas) says Democrats are grasping at straws. “Why the paper chase?” he said. “Well, the real answer is that’s all they have left.”

But Feinstein says the document fight is part of the larger battle. “It may seem trivial ... but withholding even a small number of documents from the Senate or public could prevent key facts from being known,” she said. “This is particularly true because so much is at stake with this nomination … [including issues that] define who we are as a nation and the extent of the freedoms that we all cherish.”

Brian Fallon, a former Schumer aide and Hillary Clinton campaign spokesman who now leads the judicial advocacy group Demand Justice, said the Democrats’ focus on documents may be a deliberate calculation to emphasize a less controversial issue to provide cover for moderates in both parties who face a tough vote on Kavanaugh.

Rather than basing their votes on the fact that Kavanaugh would likely provide the fifth vote needed to limit abortion or rein in environmental regulations, moderate Democrats in red states can now justify their opposition based on a less divisive issue. “These moderates have an ample argument available to them about the Republicans running a sham of a process,” Fallon said.

Making the fight about abortion could backfire for red-state Democrats in the election, says Tabitha Bonilla, a Northwestern University Institute for Policy Research assistant professor. “It seems like a good way for senators to express opposition to a nominee without having to select a partisan issue where the other parties’ voters will almost definitely disagree,” she said.

But Heidi Hess, co-director of the progressive group CREDO Action, questions whether such a strategy is wise. “They are more concerned about losing seats than losing the court,” Hess said. “To us, that’s a leadership failure on Schumer’s part.”

Democratic Sens. Joe Manchin III of West Virginia, Heidi Heitkamp of North Dakota and Joe Donnelly of Indiana are all running for reelection and face pressure in their conservative states to vote for Kavanaugh, as they did for Neil M. Gorsuch, Trump’s first high court pick.

Senate Democratic leaders may be making a long-term political gamble that it’s not worth putting those vulnerable colleagues in a tough position over a nomination battle they may lose anyway. Even with a slim majority and GOP Sen. John McCain in Arizona battling brain cancer, Republicans can confirm Kavanaugh if every remaining GOP senator votes yes.

Other progressive groups defended Democrats’ focus on the records, saying they have to respond when Republicans break with past practices.

Caroline Fredrickson, president of the American Constitution Society, said Republicans’ refusal to make all of Kavanaugh’s White House records public caught Democrats flatfooted. “This is just completely unprecedented,” she said. “Democrats are very angry about the abuse of process by the Trump White House and the Republicans.”

After rejecting Democrats’ demands for all of Kavanaugh’s records from his five White House years, Republicans initially asked the National Archives to release only records from his years in the White House legal counsel’s office. But the National Archives said it couldn’t complete even that smaller request, totaling about a million pages, by late October, prompting the GOP to shift strategies.

Instead, for the first time, rather than waiting for the National Archives to vet and release the records through the customary process, Republicans are getting the papers from Bush’s presidential library, having longtime GOP attorney Bill Burck, once a Kavanaugh deputy, vet them.

“This man is hardly a fount of impartiality,” Schumer said. “He’s a partisan.”

If Democratic leaders were hoping the document fight would give vulnerable Democrats a lifeline, few appear to be reaching for it.

Manchin says he’s been satisfied by what he’s had access to. “I’ve been satisfied with what they’ve been able to share and show me,” he said. Heitkamp’s and Donnelly’s offices referred The Times to previous statements that did not reference the documents.

And the GOP senators most likely to flip appear satisfied with the available records as well.

“I know that Democrats basically said [that] anything he has ever touched ... needs to be produced. I think there comes a point where the request is no longer reasonable,” Sen. Lisa Murkowski (R-Alaska) told the Huffington Post.

Still, there are signs that Democrats’ focus on the records is resonating with voters and creating doubts about whether Kavanaugh is being fully vetted, says San Jose State University political science professor Melinda Jackson. Polls have shown Americans are split on the nomination and are paying attention to how he could change the court’s leaning, Jackson said.

A poll by Public Policy Polling, conducted on behalf of the healthcare advocacy group Protect Our Care, found that 62% of Maine voters want senators to fully review Kavanaugh’s White House and judicial records before voting on him, and 56% said Collins shouldn’t vote to confirm him without a full review.

“There’s something about concealing stuff that raises suspicions in the minds of most Americans,” said Sen. Richard Blumenthal (D-Conn.).