Supreme Court allows homeless to keep sleeping on the sidewalk

L.A. was among Western cities asking for clarification on policies that would pass legal challenges. 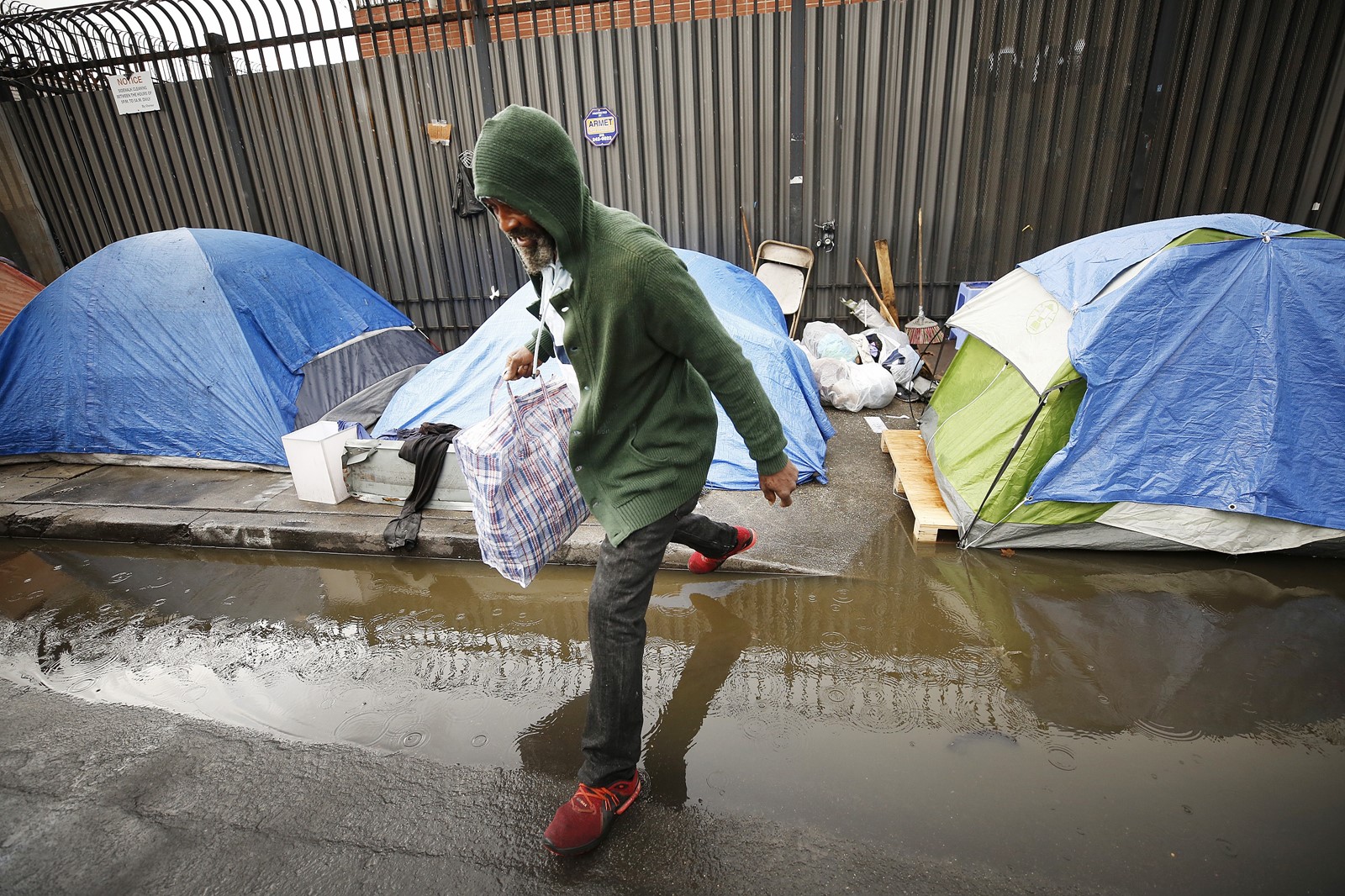 The Supreme Court refused Monday to hear a major case on homelessness, letting stand a ruling that protects homeless people’s right to sleep on the sidewalk or in public parks if no other shelter is available.

The justices without comment or a dissent said that they would not hear the case from Boise, Idaho, which challenged a ruling by a federal appeals court.

The outcome was a significant victory for homeless activists and a setback for city officials in California and other Western states who argued the ruling from the U.S. 9th Circuit Court of Appeals undercut their authority to regulate encampments on the sidewalks. The 9th Circuit had agreed with lawyers for the homeless who argued that prosecuting people for sleeping on the sidewalks violated the 8th Amendment’s ban on cruel and unusual punishment if a city failed to provide adequate shelter.

A city ordinance “violates the 8th Amendment insofar as it imposes criminal sanctions against homeless individuals for sleeping outdoors on public property, when no alternative shelter is available to them,” said the ruling by the 9th Circuit, which has jurisdiction over California and eight other Western states.

Los Angeles officials expressed disappointment with the court’s decision not to hear the case, saying that the lower court ruling had left the law unclear about what local officials could do.

Local officials had joined Boise in asking the high court to hear the case, but that was “never an attempt to criminalize the homeless; rather, it was a pursuit of a legal framework that is clear — in comparison to a status quo that is ambiguous and confusing,” Los Angeles County Supervisor Mark Ridley-Thomas said in a statement.

“Letting the current law stand handicaps cities and counties from acting nimbly to aid those perishing on the streets, exacerbating unsafe and unhealthy conditions that negatively affect our most vulnerable residents,” he said.

Los Angeles Mayor Eric Garcetti said in a statement that “homelessness won’t be solved by moving people from one street to another. Our focus will remain on providing services to save lives, keeping our neighborhoods clean and healthy, opening shelters to help get people indoors more quickly, and building permanent units to keep them under a roof for good.”

The Supreme Court did not explain its decision to turn down the appeal — the justices usually do not do so — but they may have thought the dispute was moot. Lawyers for the homeless pointed out that in 2014, Boise announced its police “shall not enforce” its misdemeanor ordinances against sleeping or camping in public when no shelter space is available.

The city thought this would end the litigation, but the 9th Circuit proceeded to issue a broad ruling last year.

In examining the appeal, the justices were faced with whether to decide a major question of whether there is a constitutional right to sleep on the sidewalk in a case in which the city was no longer enforcing the ordinances in question.

Just two weeks ago, the high court faced a similar dilemma in a gun-rights case from New York City. Gun owners had gone to court to challenge part of a city ordinance that prevented them from carrying their licensed firearms to shooting ranges outside the city or to a second home.

A federal appeals court had upheld the law, but the city repealed the disputed ordinance after the Supreme Court agreed to review the case.

The case raised a broad question about whether the 2nd Amendment’s “right to bear arms” protected a right to carry a weapon in public. But during the oral argument on Dec. 2, Chief Justice John G. Roberts Jr. and several of his colleagues strongly hinted the case should be dismissed because the city was no longer enforcing the disputed ordinance.

The chief justice may have foreseen the same would be true if the court took up the Boise case.

If so, however, Monday’s outcome probably says little about how the high court would rule if another case comes along that gives it an opportunity to decide whether the Constitution limits a city’s enforcement of laws regulating its sidewalks and parks.

The current case began more than a decade ago when Robert Martin and several other homeless people were given tickets or fines of $25 to $75 for camping on the sidewalk. They joined a lawsuit that challenged the punishments as unconstitutional.

A large group of West Coast cities including Los Angeles had urged the Supreme Court to hear the appeal in City of Boise vs. Martin.

The “creation of a de facto constitutional right to live on sidewalks and in parks will cripple the ability of more than 1,600 municipalities in the 9th Circuit to maintain the health and safety of their communities,” wrote lawyers for Boise.

“Nothing in the Constitution ... requires cities to surrender their streets, sidewalks, parks, riverbeds and other public areas to vast encampments,” the lawyers said. The appeal was filed by Theane Evangelis and Ted Olson, partners at Gibson Dunn in Los Angeles.

A right to sleep on the sidewalk is not new for Los Angeles or city officials. In 2006, the 9th Circuit handed down a similar ruling that said the city may not enforce laws against sleeping in public places. Rather than appeal, the city negotiated a settlement with lawyers for homeless people in which it agreed to not enforce such laws from 9 p.m. to 6 a.m.

The Supreme Court has previously relied on the 8th Amendment to limit the punishment for some crimes, but it is rare for judges to strike down a criminal law itself as cruel and unusual punishment. The 9th Circuit cited a 1962 decision in Robinson vs. California, which struck down part of a state law that “made the status of narcotic addiction a criminal offense.”

Los Angeles City Atty. Mike Feuer had urged the court to hear the Boise case and review the 9th Circuit’s opinion. “The lack of clarity of the Boise decision, combined with its sweeping rationale, makes more difficult the efforts of Los Angeles to balance the needs of its homeless residents with the needs of everyone who uses our public spaces,” he said.

He questioned whether the city must have shelter available for all 36,000 homeless people “before taking enforcement action against a single unsheltered individual who refuses an available shelter bed in one of the city’s regional shelters, just because shelters at the opposite end of the city are full.”