Groups aim to sway enough Republicans to vote Democratic to oust their president. 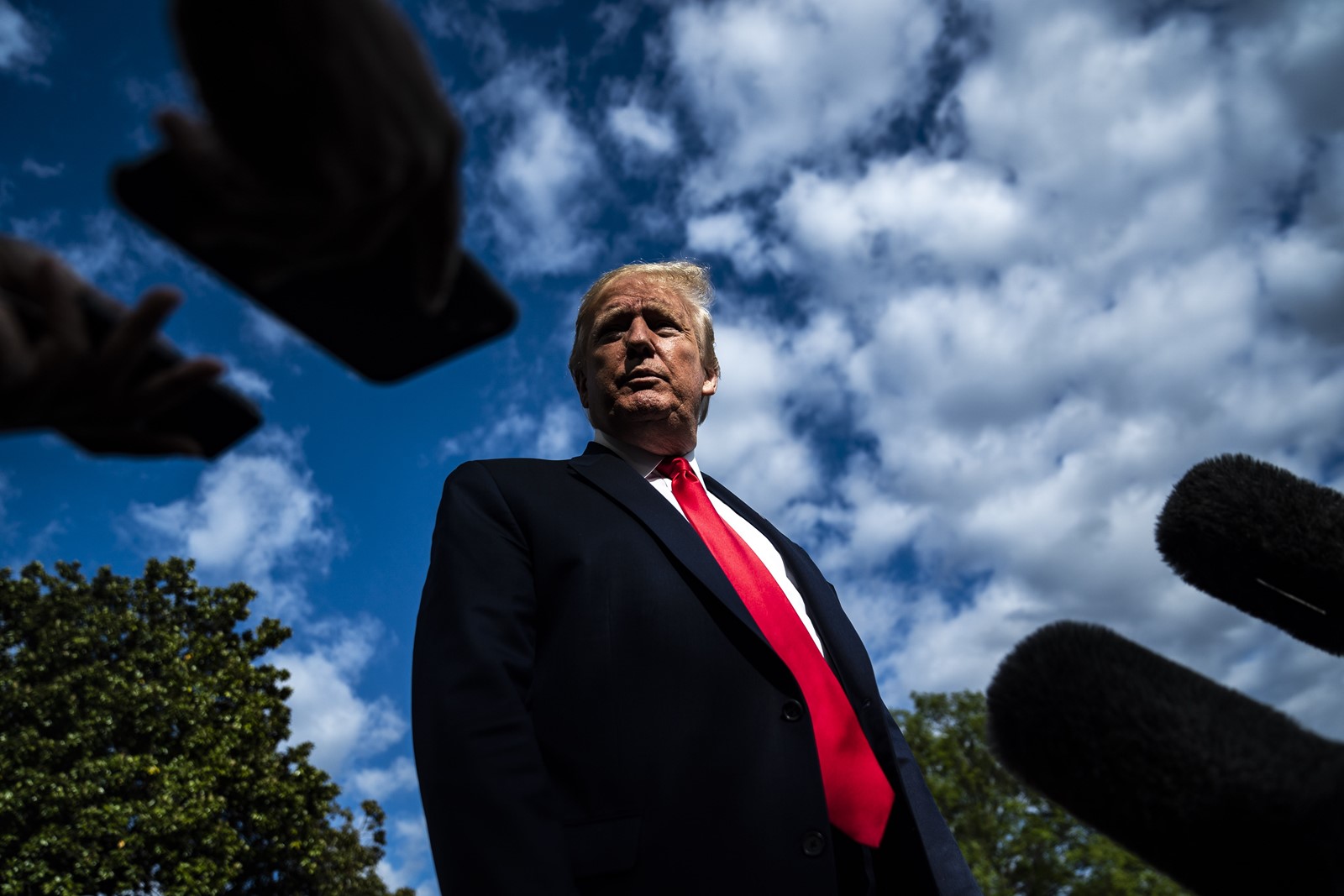 NO PRESIDENT in modern history has faced such organized opposition to reelection by members of his own party as Donald Trump. His campaign says it’s just out-of-touch insiders who don’t speak for GOP voters. (Jabin Botsford Washington Post)
PREVIOUS IMAGE

The pained testimony of more than a dozen Republican voters — who go on to explain why they plan to vote for Democrat Joe Biden — filled an ad that ran on Fox News last weekend. In the 60-second spot, one man concludes, “It’s OK to change your mind. We did.”

The message could’ve come from a Democratic playbook. But it was created by Republican Voters Against Trump, one of several GOP groups aiming to deny the president a second term by encouraging just enough disaffected Republican voters that it is in the best interest of the nation to support Biden.

“Trump is a singular danger as far as I’m concerned,” said Tim Miller, a senior advisor to the group who previously worked for former Florida Gov. Jeb Bush, former Utah Gov. Jon Huntsman and the Republican National Committee. “Joe Biden can win this election by just improving on Hillary [Clinton]’s performance among traditional Republican voters who sat it out, voted third party or held their nose and voted for Trump.”

No president in modern history has faced such organized opposition to his reelection by members of his own party.

In addition to the Republican Voters group, which counts conservative writer Bill Kristol among its leaders, there is the Lincoln Project, whose co-founders include George Conway, husband of Trump advisor Kellyanne Conway. That group is the agent provocateur of the bunch, nimbly turning around ads that have drawn the president’s ire. Former Trump aide Anthony Scaramucci is supporting the Right Side PAC. Former George W. Bush administration staffers launched the 43 Alumni for Biden super PAC; another group features Republican national security experts.

The groups plan different tactics aimed at a shared goal: moving a small segment of Trump voters who soured on the president into Biden’s column on Nov. 3.

“We’re all in this together. We are allies, and we all see our efforts as complementary. We all have our own ways of prosecuting our case against the president,” said Reed Galen, a top advisor to the Lincoln Project who previously worked for George W. Bush, the late Sen. John McCain and former Gov. Arnold Schwarzenegger. “The Lincoln Project does its best to ... take him on in a very direct manner that keeps him and his campaign off balance politically.”

“I don’t recall in my 30-plus years of working in politics ... having so many different groups formed to really bring down a sitting president of their own party,” said Miller, who is critical of Trump but not part of any of the organizations (and who is no relation to Tim Miller).

She described the effort as partly an “examination by self-identified Republicans today of what their party means and where it’s going,” though she questions their ability to sway enough voters given the president’s massive fundraising advantage.

“It takes a whole lot of money to move the needle, especially in a country this size,” Miller elaborated, adding that a targeted approach could help. “But Trump’s going to have a lot of money to defend himself and speak to the voters.”

The Trump campaign argues that these are the limited efforts of out-of-touch Washington insiders who don’t speak for GOP voters across the nation.

“This is the swamp — yet again — trying to take down the duly elected president of the United States,” said spokeswoman Erin Perrine. “President Trump is the leader of a united Republican Party where he has earned 94% of Republican votes during the primaries — something any former president of any party could only dream of.”

Trump has an overwhelming fundraising advantage over all of the anti-Trump GOP groups, many with budgets that top out in the tens of millions of dollars. But the groups are confident it is enough because they are narrowly — and surgically — focused on identifying and turning out a single-digit percentage of the electorate that they believe is enough to elect Biden.

“The Biden campaign is going to have to go out and win this thing on their own. But this is the kind of election where the margins could matter, so we just want to do our part,” said Matt Borges, a former Ohio Republican Party chairman who worked in the George W. Bush administration and now runs the Right Side PAC, which is focused on phone banking, canvassing and digital efforts to increase turnout for Biden.

Borges voted for Trump in 2016, hoping the presidency would temper his behavior. “He did change,” Borges said. “He got worse.”

Sarah Longwell, a founder of the Republican Voters group, said it spent years holding focus groups and building a voter list of several hundred thousand that helps it target a sliver of the electorate, notably college-educated women in states such as North Carolina, Arizona, Wisconsin and Pennsylvania who have grown skeptical of the president. The group’s messaging using testimonials is designed to give permission to GOP voters who never considered supporting a Democrat.

“They’re Republicans; they’ve always been Republicans. It’s cultural. It’s tribal. It’s their party, and we understand that as Republicans,” Longwell said. “This vote is about getting rid of this uniquely unsuited person.”

These efforts come as the president’s standing in national and battleground states has declined over his response to a pandemic that has killed more than 135,000 people in the U.S. and left millions unemployed.

“From what I’ve seen, a lot of Republicans are going to vote for Joe,” Biden’s wife, Jill, said on “The View” last month, adding that she heard so from many GOP voters she met on the campaign trail.

“Of course Trump has his supporters,” she continued. “But I think a lot of his supporters have become disillusioned, especially in the way he’s handled this pandemic.”

Four years ago, some “Never Trumpers” tried to derail Trump’s campaign. But their $19-million effort was limited to a short period in the primaries, with critics in the general election largely venting their frustration on cable television, op-eds and Twitter. Few lined up behind Clinton.

This time, their efforts started earlier and are more organized. And they say they are buoyed by the fact that Biden doesn’t carrythe baggage Clinton did among many Republicans after a quarter-century in the public eye as first lady, senator and secretary of State.

Biden’s record on issues such as trade and his well-known faith alleviate concerns for some GOP voters, Borges said.

“He’s not a ‘Defund the police’ supporter; he’s never been a Bernie [Sanders] ‘Medicare for all’ person. He did sign on to the balanced budget amendment,” Borges said. “These are things Republicans at least used to care about.”

These groups also have more of a runway than they did in 2016. Republican Voters Against Trump’s parent group, Defending Democracy Together, formed in 2017. The Lincoln Project kicked off in late 2019 and has received the most attention for its viral ads.

The group makes a point of putting its finger in the president’s eye, airing incendiary ads in the Washington, D.C., media market during Fox News shows Trump is known to watch. Part of its effort is aimed at an audience of one, and the president has taken notice. In May, the Lincoln Project aired an ad called “Mourning in America,” a play on a famed 1984 Ronald Reagan campaign ad. The new ad blasted Trump’s handling of thepandemic and the economic free fall. The group posted it online and spent a few thousand dollars to air it during Tucker Carlson’s Fox News show.

Trump lashed out on Twitter soon after: “A group of RINO Republicans who failed badly 12 years ago, then again 8 years ago, and then got BADLY beaten by me, a political first timer, 4 years ago, have copied (no imagination) the concept of an ad from Ronald Reagan, ‘Morning in America,’” Trump wrote in a firestorm of tweets. “... They don’t know to win, and their so-called Lincoln Project is a disgrace to Honest Abe.”

The ads, viewed by millions online, delight liberals and highlight messages that may be unseemly for the Biden campaign to zero in on, such as the president’s physical and mental fitness. One recent spot, about leaks in Trump’s White House, appeared designed to play upon the president’s perceived insecurities.

But some question the effectiveness of their ads.

The Lincoln Project is branching out to go after Republicans other than Trump, drawing flack from some strategists who say the group is muddying its message.

Arecent ad accuses senators, including Lindsey Graham of South Carolina, Martha McSally of Arizona and Cory Gardner of Colorado, of enabling the president. It is running digitally in the home states of the senators, all of whom face tough races in November.

“We made it part of our mission statement going back to December to defeat Trump and Trumpism at the ballot,” Galen said. “From our perspective, at least at this moment and time, it’s impossible to separate Trump from Republicanism and vice versa.”

The other groups are focused on reaching potential ballot splitters, who can be persuaded to vote for Biden at the top of the ticket and then their Republican Senate candidate.

“We’re looking for someone who will vote for Biden and [North Carolina Sen.] Thom Tillis. They’re a very small part of the electorate but a key part in a close election,” Tim Miller said. “We’re laser-focused on talking to them.”