Dialing up his public role, the ex-president calls Trump corrupt and dangerous, urging voters to turn out. 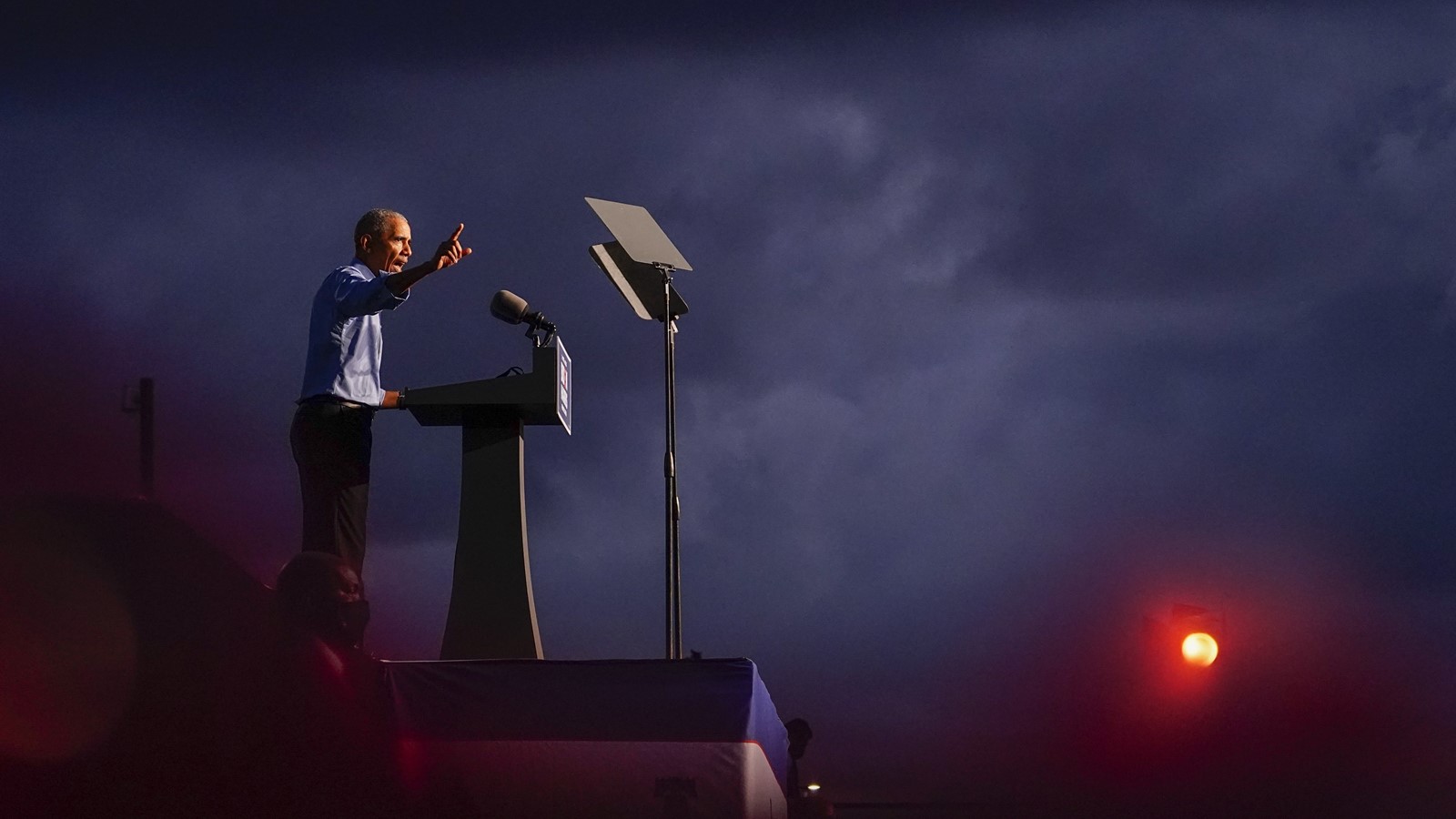 PRESIDENT OBAMA speaks at a “drive-in rally” for Joe Biden at Citizens Bank Park in Philadelphia. He suggested President Trump’s words and actions “embolden other people to be cruel and divisive and racist.” (Matt Slocum Associated Press)
PREVIOUS IMAGE

Former President Obama castigated President Trump as he hit the campaign trail for the first time in person Wednesday in Philadelphia to stump for his former vice president, Democratic presidential nominee Joe Biden.

At a “drive-in rally” outside the South Philadelphia stadium that’s home to the Phillies baseball franchise, Obama attacked Trump as incompetent and corrupt and urged Democratic voters not to get overconfident about recent polls showing Biden with a commanding national lead.

“I don’t care about the polls. There were a whole bunch of polls last time,” Obama said, referring to the 2016 campaign, in which many polls favored Democratic nominee Hillary Clinton to win. “Didn’t work out. Because a whole bunch of folks stayed at home and got lazy and complacent. Not this time. Not in this election.”

Rather than play the role of retired statesman floating above it all, Obama instead seemed to revel in his red-meat attacks against Trump, whose political career was built on spreadingthe racist “birther” conspiracy theories about Obama’s citizenship. Obama attacked Trump as lazy, untrustworthy and singularly unequipped to manage a pandemicthat has killed more than 220,000 people in the U.S.

“We literally left this White House a pandemic playbook that would have shown them how to respond before the virus reached our shores. They probably used it to, I don’t know, prop up a wobbly table somewhere. We don’t know where that playbook went,” Obama said.

He referred to Trump’s own recent COVID-19 illness, which came after the president famously refused to implement mask-wearing at the White House. “Donald Trump isn’t suddenly going to protect all of us. He can’t even take the basic steps to protect himself.”

The Biden campaign’s recent deployment of Obama as a boisterous surrogate has introduced a dynamic into the presidential campaign that Trump can’t match. Four years into retirement from the White House, Obama, 59, remains one of the nation’s most well-known and popular political figures. Biden has also enjoyed the support of his strongest opponent from the Democratic primary, independent Vermont Sen. Bernie Sanders.

Trump, by comparison, has never received any endorsement from his Republican predecessor in office, George W. Bush, and the party’s 2012 nominee, Mitt Romney, was the only Republican senator to cast a vote to convict Trump after he was impeached. Senate Republicans have even started distancing themselves from their party leader in hopes of saving themselves from a possible November blowout.

In his Wednesday evening speech, Obama cast Biden as a clean break from the chaos of the Trump years.

“Tweeting at the television doesn’t fix things. Making stuff up doesn’t make people’s lives better,” Obama said of Trump. “You’ve got to put in the work. And, along with the experience to get things done, Joe Biden has concrete plans and policies that will turn our vision of a better, fairer, stronger country into a reality.”

Obama’s visit to Pennsylvania highlights the importance of the state that both Biden and Trump have prioritized. Philadelphia is a Democratic stronghold that Biden will need to carry the divided battleground state. Obama won Pennsylvania in 2008 and 2012, but Trump carried the state in 2016 over Clinton by just 44,000 votes.

In his first appearance of the day, at a roundtable event with Black local elected officials and community leaders, Obama, wearing a mask, emphasized the importance of Black voters forming coalitions with other voters to win elections. He especially stressed the importance of getting younger Black men, who turn out less frequently, to the polls.

“It’s not just that they’re African American males; they’re young, and young people have a lot of distractions,” said Obama, whose first presidential victory in 2008 was boosted by record turnout among Black voters. “The most important thing we can do in these closing 12, 13 days, for us all, [is] to model and advertise that it’s the cool thing and the right thing to do to vote.”

To young people, “you don’t know if it’s going to work if you don’t try it,” Obama said, adding, “Give this a shot.”

“One of the biggest tricks that’s perpetrated on the American people is this idea that the government is separate from you,” Obama said. “The government’s us. Of, by and for the people. It wasn’t always for all of us, but the way it’s designed, it works based on who’s at the table. And if you do not vote, you are not at the table, then yes, stuff is done to you. If you’re at the table, then you’re part of the solution.”

Obama had largely stayed away from publicly criticizing Trump for much of Trump’s presidency. But the former president has taken an increasingly public role in support of Biden, including giving a speech at the Democratic National Convention in which he said, “Donald Trump hasn’t grown into the job because he can’t.”

At his drive-in rally, Obama told the crowd,“We’re not gonna have a president that goes out of his way to insult anybody who doesn’t support him, or threaten them with jail. That’s not normal presidential behavior…. Why are folks making excuses for that? ‘That’s just him.’ No!” Obama said. “There are consequences to these actions. They embolden other people to be cruel and divisive and racist. And it frays the fabric of our society, and it affects how our children see things.”

With that, Obama’s audience started honking the horns on their cars.