Wildlife ban not enough to prevent another virus

China’s new steps to rein in trade have loopholes 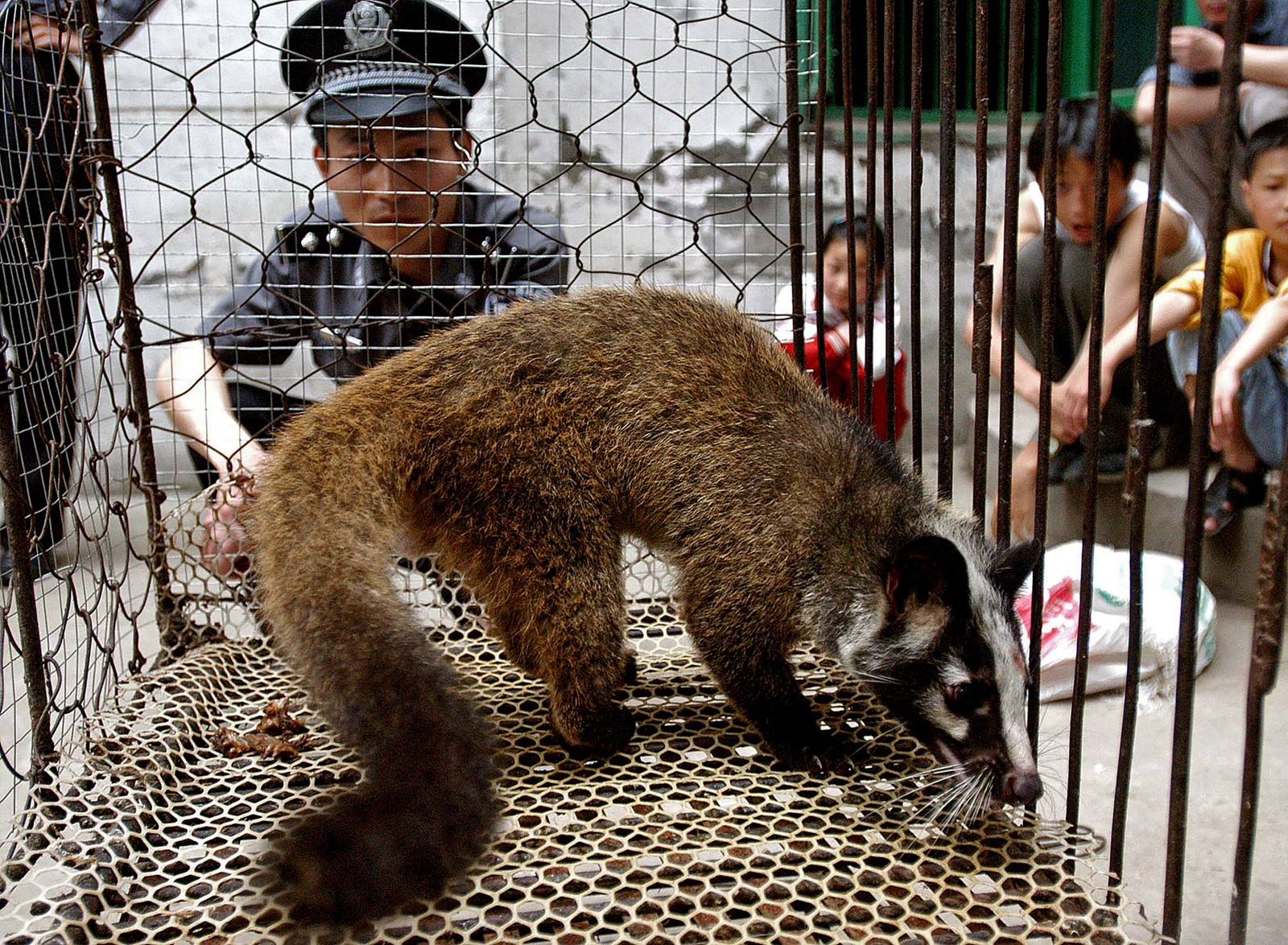 A POLICE officer in Wuhan watches over a wild civet in 2003. China has banned wildlife trade and consumption because of COVID-19, but medicine is exempt. ( AFP/Getty Images)
PREVIOUS IMAGE

When SARS hit the world in 2003, China went after the civet.

The weasel-like animal, eaten as a delicacy in southern China, was suspected of being an intermediary host of the virus that infected 8,000 people and killed 800 in China and across the world. Tens of thousands of civets were drowned or electrocuted.

China also banned the hunting, trading and consumption of wildlife. But that restriction was lifted three months later. The National Forestry and Grassland Administration announced that 54 types of wildlife, civets included, could be consumed and sold, as long as they were raised on farms.

By 2019, the wildlife trade was thriving. In November, the forestry administration republished a news report from Jiangxi province on its website, boasting that it had helped 1,700 people in one town alone to take up civet breeding and “embark on the road to riches.”

Stories of success read like fables: “The cold winter wind was screaming on Nov. 27, but Zhang Zhilin, a poor farmer in Shaping town of Wanan county had a ‘warm sun’ in his heart. The 33 civet cats he bred would come out for sale next year, bringing in $7,000 of income,” the report read.

Two months later, another coronavirus — SARS-CoV-2, as it is officially called — was sweeping the nation. The disease it causes, COVID-19, would soon devastate the world, infecting more than a million people and killing more than 64,000 so far.

Once again, China banned wildlife trade and consumption, first temporarily, then upgrading to a permanent ban on Feb. 24 — though it has not yet been enshrined in the Wildlife Protection Law. Since then, authorities have shut down nearly 20,000 farms raising peacocks, porcupines, ostriches and other animals.

Conservation groups lauded the ban as a major step forward, but not enough to stop another outbreak: The ban covers only land animals. It punishes consumers but does not tackle corrupt ties among government officials, corporate interests and “breeders” who use permits as a cover for illegal trade.

And it leaves a glaring loophole by allowing continued use of wildlife for traditional Chinese medicine, including animal-based remedies that national health authorities are now prescribing as treatment for the coronavirus. Current law permits the farming of bats, pangolins and bears to make medicine from their feces, scales and bile, which drives the demand for wildlife and raises the risk of another pandemic.

For years, Chinese and international conservation groups have been calling for a change in China’s approach to wildlife “protection,” which views wild animals as essentially a commodity and sanctions farming and breeding for human consumption and corporate profit.

It is a $73-billion industry that employs more than 14 million people, according to a 2017 industry report by the Chinese Academy of Engineering. The government has promoted its growth, especially in underdeveloped rural areas, in recent years.

As part of a Communist Party-led initiative to eliminate poverty in China, Wanan county has invested more than $1.3 million in infrastructure for civet breeding and given more than $28,000 in subsidies to farmers who pivoted into the wildlife business, according to the Jiangxi report.

“Wildlife breeding and utilization is a rapidly developing industry in recent years. Our province should seize the opportunity,” said Huang Xiaofeng, director of wild animal and plant protection at Jiangxi province’s Forestry Academy, in the report.

Under China’s Wildlife Protection Law, enacted in 1989 and most recently amended in 2018, wild animals, including endangered species, can be farmed and traded by purveyors with government permits, usually granted by provincial authorities.

Conservation groups say the permit system masks the illegal hunting and trading, including species on the brink of extinction. There are now fewer than 4,000 wild tigers worldwide, for example — a 96% decrease in population since the start of the 20th century — while China has at least 6,000 captive tigers in farms, according to animal rights groups.

Captive tigers and other “farmed” wildlife serve no conservation purpose, experts say, because they cannot survive in the wild.

The COVID-19 pandemic has exposed the increased risk of zoonotic diseasesestimate from wildlife breeding — illnesses caused by viruses that “spill over” from animals to humans. Scientists that 3 out of 4 new or emerging infectious diseases in people come from animals, including many of the worst diseases humans have faced in recent years: SARS, Ebola, HIV/AIDS, MERS, avian flus and COVID-19.

Huanan seafood market, a wet market in Wuhan where live animals including bamboo rats, civets, snakes and other wildlife were slaughtered and sold, is the suspected epicenter from which the novel coronavirus spread. The likely trajectory of the virus is from a horseshoe bat to an intermediary, possibly a pangolin, and then to a person.

“If they’re all put together in a close, closed environment, those animals will be panicked,” said Aili Kang, Asia Program director at the New York-based Wildlife Conservation Society.

“Their immune system may not be in a good place. It allows the virus to jump from one body to another, to attack and develop,” Kang said. “It’s an incubator type of environment.”

Zoonotic diseases are a risk in all animal farming, including that of poultry and livestock, such as chickens and cows. But wildlife poses a higher danger because humans are largely unaware of the diseases wild animals could carry. China’s lax regulation results in wildlife farmers often mixing many types of animals together, increasing virus mutation and transmission.

“They think, ‘One species, OK, two species, OK, so why not get 10?’ That jump itself is a problem,” Kang said. “Any type of wild animal business has that risk.... It puts consumers in a naive situation. It’s not safe.”

Changing China’s wildlife industry would require not only public education and cultural shifts, but also a confrontation with corporate interests and official corruption.

The China Wildlife Conservation Assn., or CWCA, a nongovernmental organization with many members who are former national forestry administration officials, has recently come under fire for promoting wildlife farming as “animal protection.”

Shen Wangping, a volunteer with the China Biodiversity Conservation and Green Development Foundation, who tracks illegal wildlife poaching and trading in Henan province, said that the biggest culprits in wildlife poaching were the forestry administration and CWCA. “People think this administration’s job is to protect wild animals. But the organization’s main objective is to push the breeding of wildlife everywhere, to give out permits for wildlife breeding and sales,” Shen said.

“Breeders who have these permits can go to the wild and hunt down wild animals, pretend they are human-bred, and sell them legally on the market.”

Last year, The Times reported on a provincial forestry administration that had issued breeding permits for pangolins, a critically endangered species, to a steel company in Guangdong province, which was then implicated in a criminal case of wildlife trafficking involving more than 50,000 smuggled pangolins.

“They’re the biggest criminal circles of illegal smuggling,” according to a former wildlife protection official in Guangxi province who said he had been offered near-daily bribes to turn a blind eye to wildlife smuggling. He compared wildlife traffickers to drug and arms smugglers.

Meanwhile, three of the CWCA’s 14 board vice chairs are executives of traditional Chinese medicine companies, which have commercial interest in farming wildlife for their products.

Those executives are Liu Jianshun, president of Ganzhou Pianzihuang, a medicine made of deer musk, cow gallstone, snake bile and an herbal root; Gao Zhenkun, managing director of Beijing Tongrentang, one of the world’s biggest traditional Chinese medicine companies, famous for its tiger bone wine; and Guo Jiaxue, head of Guangyuyuan, another such company whose trademark product traditionally includes pangolin scales and seahorse.

“These are the people in charge of the Chinese Wildlife Conservation Assn.,” said Zhou Jinfeng, secretary-general of the China Biodiversity Conservation and Green Development Foundation. “China’s wildlife are doomed, aren’t they?”

The CWCA did not respond to The Times’ requests for comment.

The latest edition of China’s national guidelines for COVID-19 treatment recommends a traditional Chinese medicine called Its main ingredient is bear bile, a liquid harvested from the gallbladders of bears kept in captivity. Techniques range from inserting rubber or metal tubes through a bear’s abdomen to cutting a permanent hole in the bear so its bile can “free-drip” for collection.

A spokesperson for Shanghai Kaibao Pharmaceutical Co., the producer of and China’s largest bear bile manufacturer, said in a phone call that the ingredients come from “government-authorized animal breeding farms” and “at least the third generation of bred bears, not wild bears.”

The spokesperson, a member of the marketing department who did not give a full name, said that Shanghai Kaibao is also developing alternative materials for bear bile.

There is no clinical proof that traditional Chinese medicine helps to combat COVID-19. But authorities say they have used it to treat 85% of coronavirus patients in China. State media boast of its efficacy and promote its use in Africa, without mentioning that its production drives demand for wildlife farms and increases the risk of zoonotic disease outbreaks.

In a study published Feb. 14 in Letters in Applied Microbiology, German and Chinese researchers found that some of the bat species used for traditional Chinese medicine are likely hosts of the novel coronavirus.

Three of them — and — can be found in Hubei province, which includes Wuhan. The third species, more commonly known as the greater horseshoe bat, is handled commercially for its feces and body parts.

Called , “night brightness sand,” the bat feces is used to cure eye conditions, while the bat’s body parts are dried and either drunk with wine or ground into powder and swallowed as a general “detox” remedy.

Wild bats pose a risk of disease transmission to anyone who handles them: “Even when the selling of live wild animals at food markets would be completely prohibited in China, the trading and handling of bats for traditional medicinal practices would remain a serious risk for future zoonotic coronavirus epidemics,” the researchers wrote.

China will have a chance to make a landmark step toward true conservation and away from commercialization in the name of protection when the National People’s Congress is expected to amend the Wildlife Protection Law this year.

Conservationists hope that China will ban wildlife use in medicine as well as consumption, and seriously regulate or end the wildlife farming system altogether.

Seventeen years after the SARS outbreak, Chinese society could be ripe for change. Surveys show that there has been a significant decline in wildlife consumption, especially in cities such as Beijing and Shanghai, though the practice remains common in the south.

“Society is ready to blame themselves, not just to blame those animals,” Kang said. “More organizations are standing up to say, ‘It’s not their problem, it’s our problem!’ ”

The question, according to conservationists, is whether Beijing will protect the interests of a multibillion-dollar industry that the state has promoted for years, or the lives of those it has endangered: dozens of animal species and billions of humans now exposed to COVID-19, including tens of thousands who have died.

Whether the planet can reduce the risk of another pandemic will depend on what China chooses.