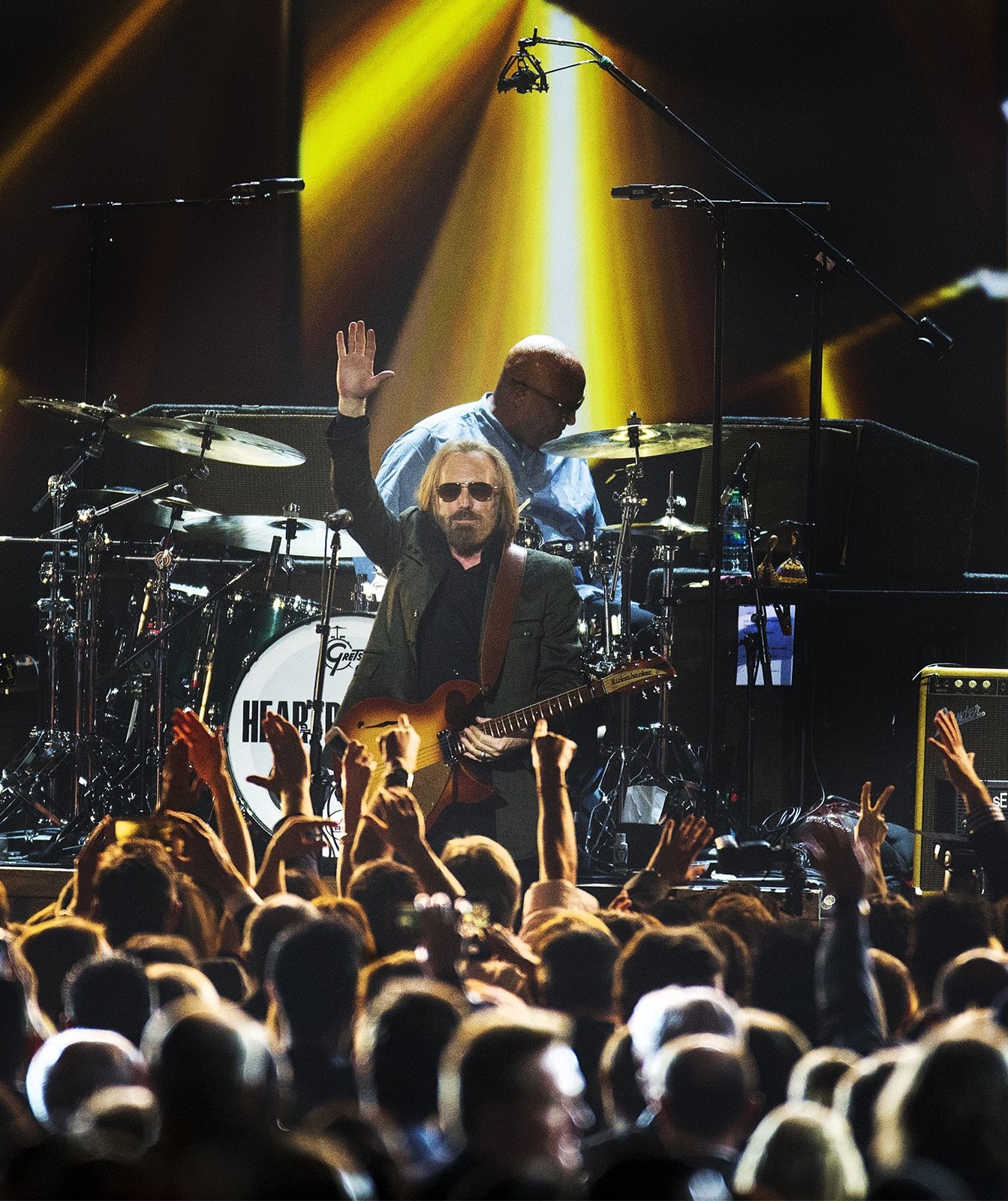 “Lonesome Dave,” one of 11 previously unreleased recordings among 60 tracks on the forthcoming Tom Petty memorial box set “An American Treasure,” captures much of what made the rock star so special to band mates Mike Campbell and Benmont Tench.

“I like that one because it’s so raw,” Heartbreakers lead guitarist and Petty’s frequent songwriting collaborator Campbell said, leaning back into a sofa and occasionally plucking the resonator guitar he’d picked up in his home recording studio in the San Fernando Valley on Thursday.

Tench sat 3 feet away, leaning on the other arm of the well-worn couch. “We had barely learned it at that moment, and we were all laughing about the lyrics.”

The track was recorded in 1993 while Petty was working on his second solo album, “Wildflowers,” but still had the Heartbreakers with him in the studio. Campbell recalls the group discussing the prospect of their next tour together, and someone asked, “Whatever happened to Lonesome Dave?” referring to Dave Peverett, the lead singer and rhythm guitarist for English rock band Foghat, a band that famously burned out through relentless touring.

The Heartbreakers quickly concocted a breakneck rock boogie in the vein of Chuck Berry with a Southern rock slant. Petty spun out lyrics that included the line, “Whatever happened to Lonesome Dave?”

Campbell and Tench remember Petty inventing lyrics in the moment. Tench says, “If you listen to the lyrics all the way through, it’s seamless. … I always say I’m an evangelist for Tom, because I think the world needs to know just how great he was.”

That’s a motivation for Campbell and Tench in collaborating with Petty’s widow, Dana, his daughter, Adria, and recording engineer Ryan Ulyate on a four-CD set slated for Sept. 28 release, four days ahead of the first anniversary of Petty’s death at age 66 from what was ruled to be an accidental overdose of prescription painkillers and other medications.

The compilation includes many of the band’s biggest hits in their original studio versions as well as alternate takes, live performances and demo versions of songs spanning not just the life of the Heartbreakers, which formed in 1976 in Los Angeles, but stretching further back to sample the members’ earlier work together in Gainesville, Fla., as Mudcrutch.

Petty’s record label, Reprise, released a new crowd-sourced video for another of the previously unreleased tracks, “Keep a Little Soul,” which filmmaker, art director and editor Adria Petty oversaw and unveiled Wednesday night to several dozen invited guests at a playback in West Los Angeles of highlights from the box set and a question-answer featuring Campbell, Tench and Ulyate.

The event was held at the Village recording studio, where the Heartbreakers first played together some 42 years earlier.

Adria Petty noted that the recording used home movie footage her father and others shot playfully while on tour in 1980.

“I think it shows the magic of my dad, his personality and his sweetness,” Adria told the about 75 attendees, among them George Harrison’s son, musician Dhani Harrison; Doors lead guitarist Robbie Krieger; Willie Nelson’s guitarist-singer-songwriter son Lukas Nelson; Dana Petty; and Petty’s longtime manager, Tony Dimitriades, among other industry executives and music writers.

Addressing the issue of why certain songs had sat on the shelf for years or even decades, Ulyate said some just didn’t fit within the mood of themes the band wanted to focus on in various albums.

“We might be working on a song one day and everyone thinks, ‘Yeah, that’s pretty good,’ ” Tench said, “and then Tom might come in the next day with ‘Southern Accents’ or ‘Don’t Come Around Here No More’ and suddenly we’d go to work on that and never come back to the one we were working on the day before.”

Both praised Ulyate’s contributions for unearthing worthy archival recordings to consider, such as “Surrender,” a song recorded in 1976 while the Heartbreakers were at work on their debut album. Tench and Campbell said they took multiple stabs at it over the next few years and felt at the time they’d never quite nailed it.

Wednesday’s event end- ed with the premiere of another video for the previously unreleased track “You and Me (Clubhouse edition).” It’s a stripped-down version of a song that originally appeared on the group’s 2002 album, “The Last DJ,” and it served as a poignant salute to Petty’s fans and to his band mates and what he envisioned as a long future together: “Take a look at what I got / I can’t promise a lot / But you and me and the road ahead.”