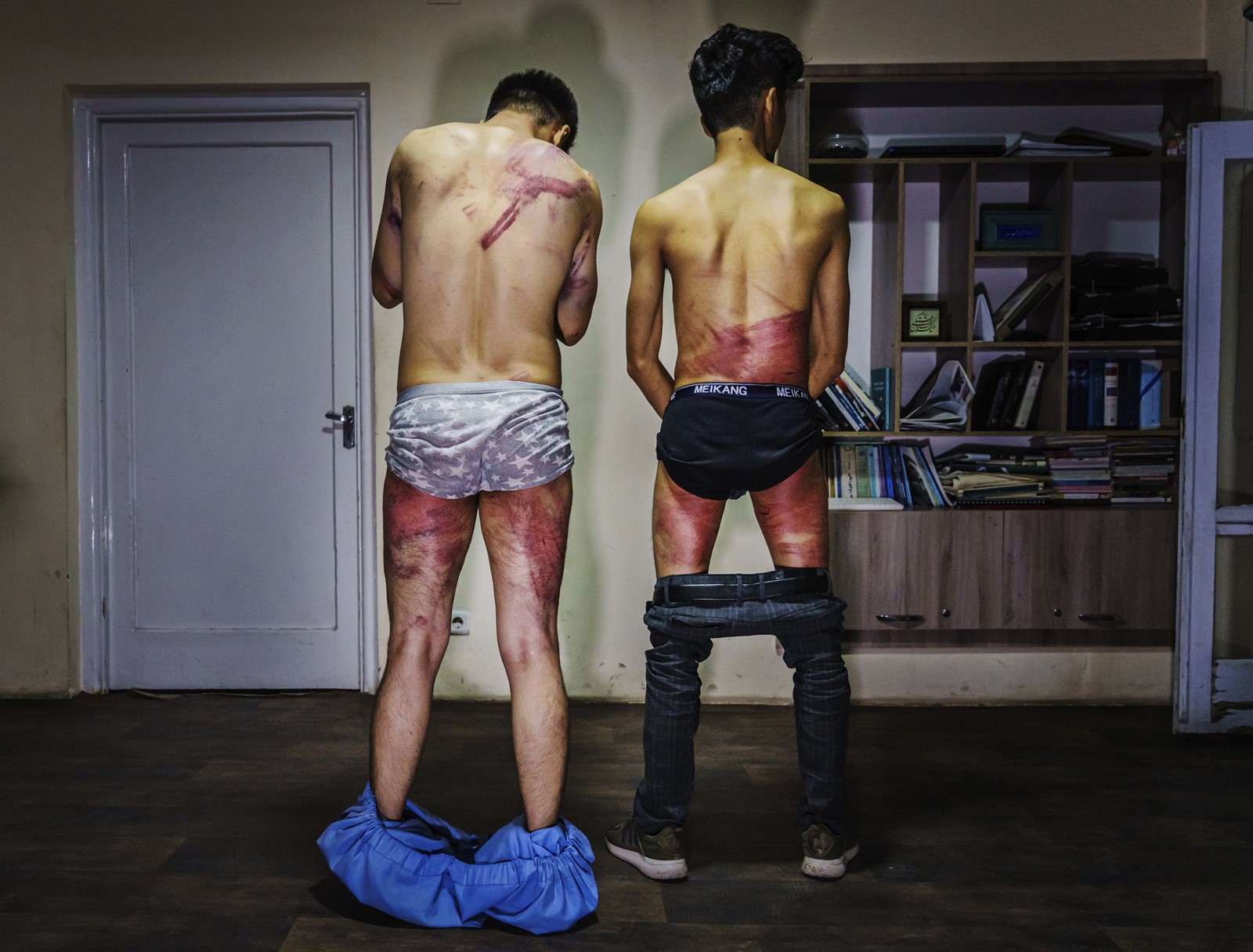 THESE journalists with a Kabul newspaper say they were tortured while in custody after covering protests. (Marcus Yam Los Angeles Times)
PREVIOUS IMAGE

After being shut out from the Taliban’s new government, women increased pressure on Afghanistan’s new rulers with a number of protests Wednesday, at least one of which was broken up by Taliban fighters who whipped some of the demonstrators and arrested local journalists.

The protests came one day after the Taliban announced an interim Cabinet composed exclusively of the group’s stalwarts, with no women or former political figures and few minorities. Although the rallies were small, with only a few dozen women in each case, they put the new government to the test after it declared that participating in — and covering — protests is illegal without government permission.

The rallies illustrated the reality that, though the Taliban may now stand virtually unchallenged on the battlefield, the group faces a more complicated task in getting fearful Afghans — especially women and city residents — to buckle under its rule. It is evident that the militant group is growing less tolerant and more violent in confronting criticism amid calls for wider civil rights.

A video posted on social media showed a Taliban fighter whipping one of the demonstrators as several women screamed and hurried away. The Times verified the location where the video was taken. Two Afghan journalists were taken to a police station and beaten with pipes and rifle butts.

Protesters assembled Wednesday at 8 a.m. near a bank on the main thoroughfare bisecting Dasht-e-Barchi, a southwestern Kabul neighborhood dominated by the minority Hazara community. They stood in a semicircle and raised printed signs in Dari and English. One of them read, “Why is the world watching us silently and cruelly?”

Soon after, they began their march down Shaheed Mazari Road, holding up their signs and shouting, “!” — freedom — as a parade of minivans, motorcycles and ’90s Toyota Corollas passed by them.

Trailing at the back was Rahela Talash, who along with her colleague was lugging a portable speaker with a broken handle: “No women, no Hazara [in government]. It’s completely wrong. This is why we are here,” she said, adding that the Taliban’s government was almost completely chosen from the dominant Pashtun ethnic group.

There was also a notable omission in the new Cabinet compared with the government of deposed President Ashraf Ghani: The Ministry of Women’s Affairs, which had existed since late 2001, after the Taliban was driven from power by a U.S.-led invasion, appears now to have been disbanded, a move that enraged many of those at the protest.

“It’s completely wrong that they don’t think about us. We’re half of this society. They have to consider us,” said Mariam Shafaii, a 19-year-old student.

The Taliban signaled it was losing patience with demonstrations:

“For the past few days, a number of people in Kabul and other provinces have taken to the streets in the name of demonstrations, disrupting security, harassing people and disrupting normal life,” the Interior Ministry said in a statement. “All citizens are informed that for the time being, they are not [to try] to hold demonstrations under any name or title.”

Shafaii was not deterred. “We will not keep quiet,” she said.

In another sobering turn, the Taliban has reinstituted a ministry for the promotion of virtue and prevention of vice, which was notorious during the group’s 1996-2001 rule for its brutal enforcement of the militants’ ultraconservative brand of Islam. The ministry presided over the amputation of thieves’ hands and the stoning deaths of women found guilty of adultery.

“The Taliban were at a crossroads: Choose a path that would mollify the international community ... by being more open and inclusive, or they could have taken the easy path of appeasing their own rank-and-file and going back to what had worked for them in the 1990s,” said Ibraheem Bahiss, an Afghanistan consultant with the International Crisis Group. “They very much chose the latter.”

That choice was met with opprobrium, with many nations expressing their disapproval of a government makeup that is exclusively Taliban. “The government certainly does not meet the test of inclusivity,” said U.S. Secretary of State Antony J. Blinken in a news conference Wednesday from Ramstein Air Base in Germany. “We’re also concerned by the affiliations and track records of some of those individuals.”

Roughly half of the Cabinet’s members are under U.S. or United Nations sanctions. The acting minister of the interior, Sirajuddin Haqqani, is wanted by the FBI, which placed a $5-million bounty on him. Blinken, however, said he would wait for “actions” to finally assess the government and determine its legitimacy and the future of U.S.-Afghan relations.

On Wednesday, after 45 minutes of walking, the protesters in Kabul came upon a parked Humvee. FourTaliban fighters moved to push the women back. Despite the AK-47s the fighters carried, the women swarmed toward them, shouting and arguing with the leader until he relented and allowed them to continue.

But other fighters near the Karte Char police station, close to the center of Kabul, were less tolerant. There, another group of demonstrators shouted and toted signs before bewildered Taliban members, many of them young men from rural areas, where little of the West’s campaign for female equality has trickled down over the last 20 years.

When two Times journalists approached, the fighters broke away from the protest and surrounded them, lunging for one of the journalists’ cameras. They then shoved them toward the police station, where a number of local journalists had already been detained.

“It’s not allowed to photograph these protests,” one of the Taliban leaders said after examining a media permit. “They are illegal, and you must delete any photos taken there.”

Another, younger Taliban fighter with kohl-lined eyes said it was forbidden to photograph women.

“Why are you doing this? This is against Islam,” he said.

The Times journalists were escorted to their car and were watched until they left.

Meanwhile, five journalists from Etilaatroz, a local newspaper, remained inside the station; two of them had been arrested earlier, at the start of the protest. When an editor and two other Etilaatroz journalists came to the station to try to persuade the Taliban to release their colleague, they too were detained. Also taken into custody was a local producer with Euronews.

The Euronews producer was repeatedly slapped in the face by three of the Taliban members, who took his phone and wallet, a colleague said. Both were returned when he was released, and he was otherwise unhurt.

The Etilaatroz reporters first arrested, video journalist Nemat Naqdi, 28, and video editor Taqi Daryabi, 22, were spotted by the Taliban and told they didn’t have permission to film. They grabbed Daryabi and dragged him into the station; Naqdi managed to move away.

“They didn’t let me resist,” Daryabi said. He said he was shoved to the ground, tortured and beaten unconscious. He was taken to a yard and water was poured on him. He was still there when they brought Naqdi.

“We were shouting that we are journalists. But they didn’t care,” Naqdi said. “I thought they were going to kill me. ... They kept on ridiculing us, asking if we were filming them.”

When the two journalists were finally told to leave, they couldn’t find their shoes. Their phones were eventually given back to them, but not Naqdi’s glasses. He said he could barely walk to the car. A video released later of Daryabi shows him unable to walk unaided, limping as he is supported by two of his colleagues.

Pressure against the Taliban is rising on other fronts as well, notably in Panjshir, a province long locked in battle with the group. The Taliban announced its takeover of the province this week. But the National Resistance Front, a grouping of anti-Taliban figures including Ahmad Massoud, son of a legendary Northern Alliance guerillla leader, said they were still fighting.

Ghani, the deposed president who fled the country when the Taliban reached Kabul, issued a statement from his exile in the United Arab Emirates on Wednesday saying that leaving the capital was “the most difficult decision of my life.” But he said he believed it was the only way to save the city.

“It is with deep and profound regret that my own chapter ended in similar tragedy to my predecessors — without ensuring stability and prosperity,” he said. “I apologize to the Afghan people that I could not make it end differently.”

That apology — observers noted that though Ghani said his speech was for the Afghan people, it was published only in English — had little effect on Daryabi, who is now confronting a more troubling power. “The Taliban haven’t changed a bit,” he said, adding that he was considering finding a way to leave the country.

“Absolutely there is no safety,” he said. “Journalism doesn’t mean anything to them.”