in Texas for the embattled senator, once his bitter rival. 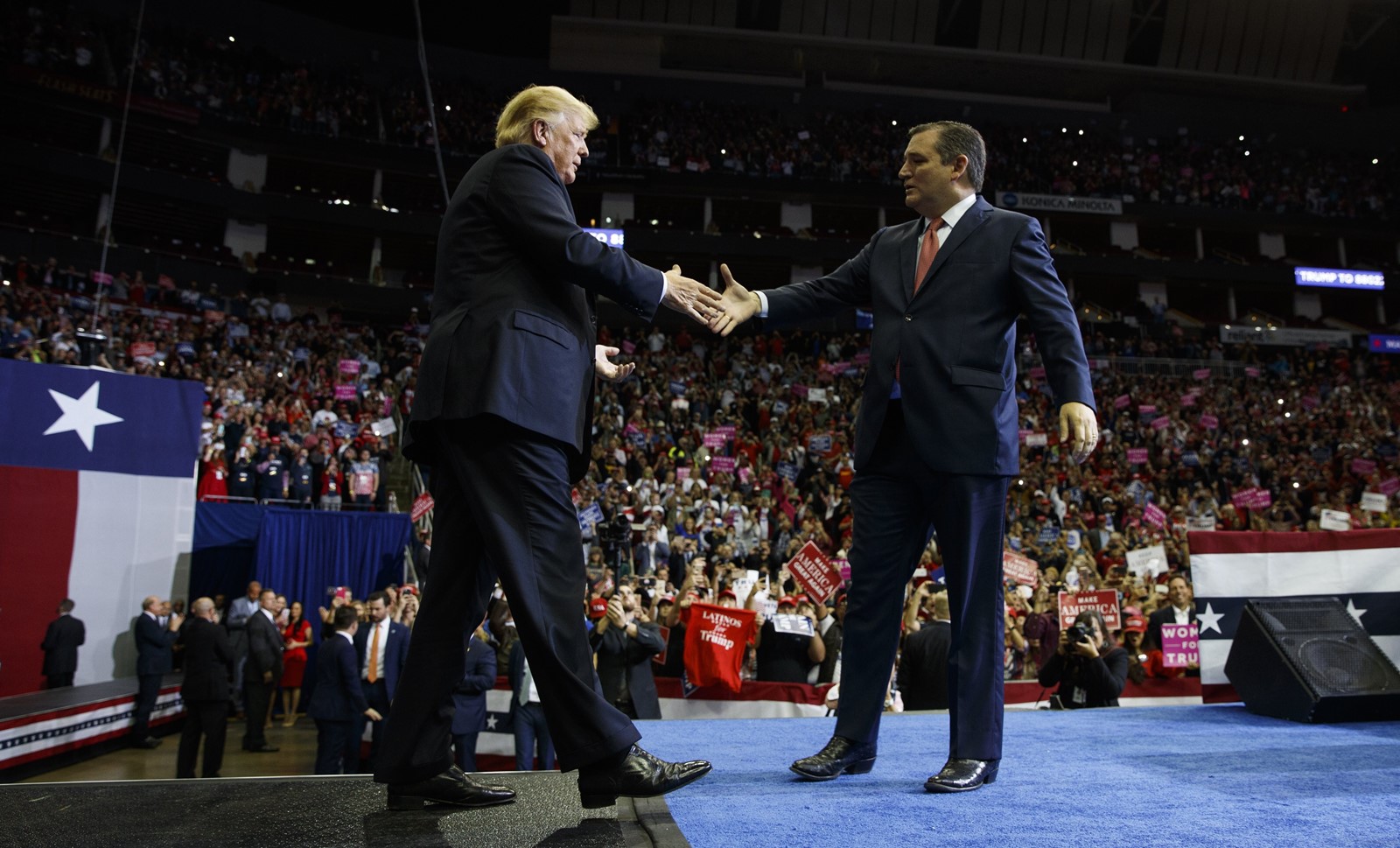 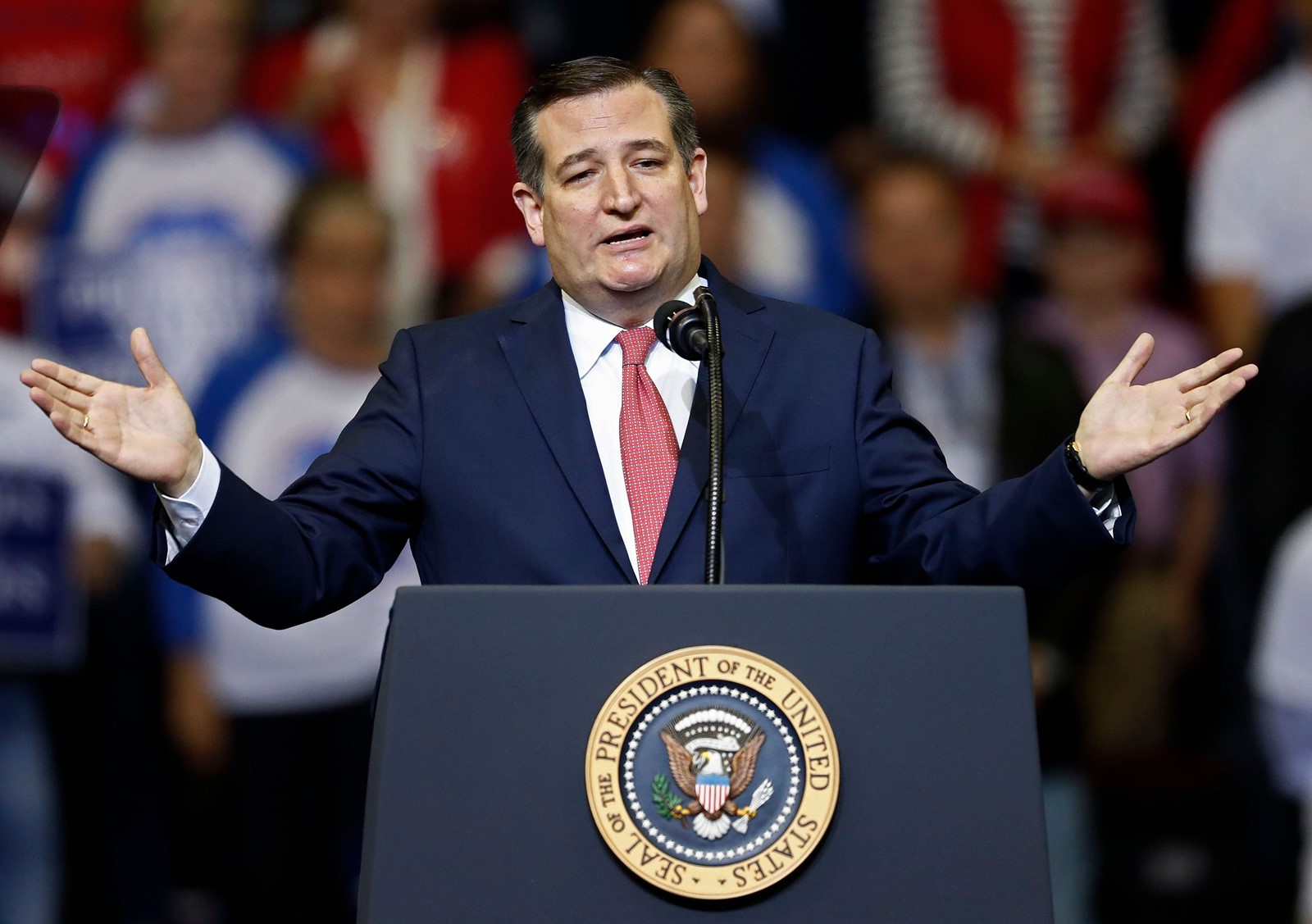 President Trump took the stage in Houston on Monday night to deliver a message unthinkable two years ago to many of his most ardent fans: Vote for Ted Cruz.

“You know, we had our difficulties,” Trump said soon after taking the podium. He went on to say that Cruz had “become a really good friend.”

That’s the same Texas senator Trump once dismissed as “Lyin’ Ted,” whose father Trump suggested played a role in the assassination of President Kennedy, and whose wife he mocked, prompting Cruz to call him a “sniveling coward.”

The same Cruz who called Trump a “pathological liar” and an “amoral bully” on the campaign trail and, after losing the primary, refused to endorse Trump at the Republican National Convention, urging Republicans to “vote your conscience.”

But now they are united in the common cause of the midterm election, and all the bad blood seems to be forgotten.

Cruz, who appeared as Trump’s warm-up, described the president as “bold and courageous.”

“I’m proud to have worked hand in hand with President Trump,” he said, drawing the biggest applause when he predicted that “in 2020, Donald Trump will be overwhelmingly reelected.”

Cruz’s race is among the most closely watched Senate contests. As early voting started Monday, it appeared that the new relationship between Cruz and Trump extended to their supporters.

“There’s a reunification going on,” said Eric Smith, a Cruz backer who became a Trump fan during the last two years and lined up early for Monday’s rally. “It’s like when your favorite band breaks up and the two main guys don’t get along.... I think there’s a future.”

Rhonda Bland, 50, a retired librarian from Houston who voted for Trump two years ago in the Republican presidential primary and was now backing Cruz, said she thought the rally would drive turnout among Trump’s base — for Cruz.

Trump made the same pitch to his supporters that he’s made at rallies across the country for other congressional candidates: “A vote for a Democrat is a vote to surrender Congress.”

He also gave it a Texas twist: “In this election you can send a message to the radical Democrats: Don’t mess with Texas.”

The visit to Houston was designed to counter a surge in support and donations for Cruz’s opponent, Democratic Rep. Beto O’Rourke, who also held get-out-the-vote rallies Monday in and around Houston.

Trump has called O’Rourke a “flake” and a “total lightweight” compared with Cruz, even as O’Rourke raised more money and the race tightened enough to give him a chance.

On Monday, the president dismissed O’Rourke as “a stone-cold phony” and a pro-immigrant lawmaker in favor of higher taxes and open borders.

“The Democrats would rather destroy American values than protect America’s borders. Vote for Ted Cruz,” Trump said, reminding the crowd that a caravan of thousands of Central American immigrants is wending its way north through Mexico.

“Nobody has helped me more,” Trump said of Cruz. “We are defending that border.”

Cruz pointed out that he had the endorsement of the Border Patrol union, which led to chants of support for Trump’s signature promise: “Build the wall!”

“There is no race in the country with a starker divide on immigration,” Cruz said. “We need to build the wall.”

Britney Husfeld was persuaded. The 34-year-old voted for Trump over Cruz in the 2016 Texas Republican primary. She said the crowd at Monday’s rally sent an important message: “There are people who support Trump and Cruz.”

Recent polls show Cruz is ahead in the Senate race, and supporters hoped the Trump rally would boost Republican turnout.

“Trump is going to swing people,” said Joe Hunter, 60, a chemist from nearby Friendswood, where yards have sprouted a mix of Cruz and O’Rourke campaign signs. He’s got a Cruz one.

But Husfeld, a real estate agent from rural, conservative Navasota, where she’s also spotted O’Rourke campaign signs, said she was worried that hard-core Trump supporters wouldn’t be motivated to vote for Cruz.

“I don’t know that people can be swayed,” she said.

Cruz has said he talked to Trump about visiting Texas, but it was Texas Lt. Gov. Dan Patrick, a Tea Party stalwart and Trump’s 2016 Texas campaign chairman, who traveled to Washington to seal the deal. Patrick and Texas Gov. Greg Abbott both spoke at the Houston rally, along with Texas Sen. John Cornyn and Trump’s son and daughter-in-law Eric and Laura Trump.

Trump’s speech at the nearly packed 18,000-seat Toyota Center began at 6:30 p.m., but hundreds of fans lined up overnight, having traveled from across Texas and surrounding states.

Patricia Brady said she drove her 14-year-old son several hours from their home in Corpus Christi, Texas, to the Trump rally, their first. She was inspired after watching the confirmation hearings for Supreme Court Justice Brett M. Kavanaugh, which she called “outrageous.”

Brady said she agreed with Sen. Susan Collins (R-Maine) that Kavanaugh was unfairly pilloried, and said the hearings would probably motivate conservatives to turn out in the midterm election.

“There was a fire that got ignited” by the hearings, said Brady, 47, a respiratory therapist. “The way the Democrats have been acting upset a lot of people.”