The cost of free seafood

Reopened beaches draw takers to San Pedro tide pools. They hope to bag mussels but put the ecosystem at risk. 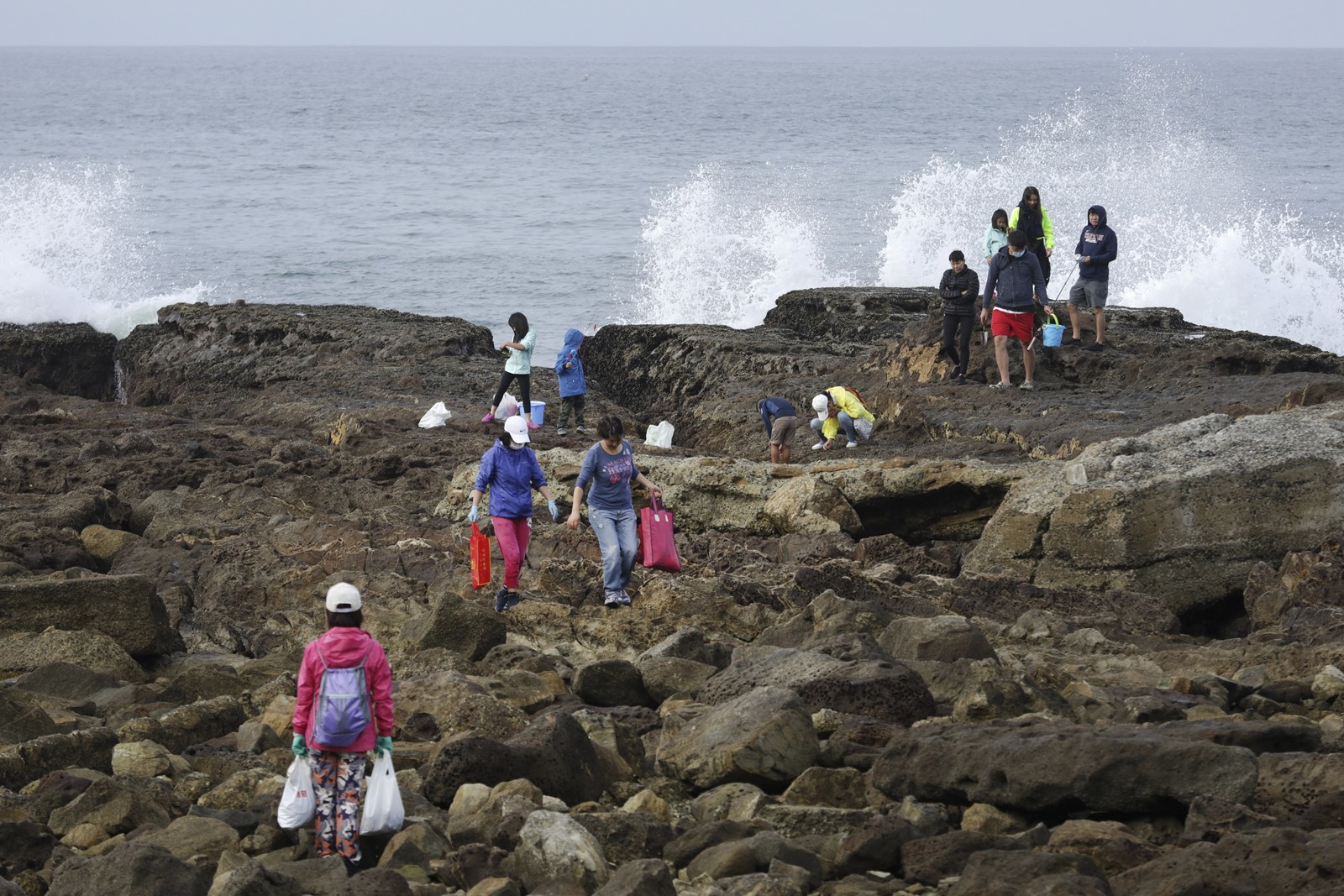 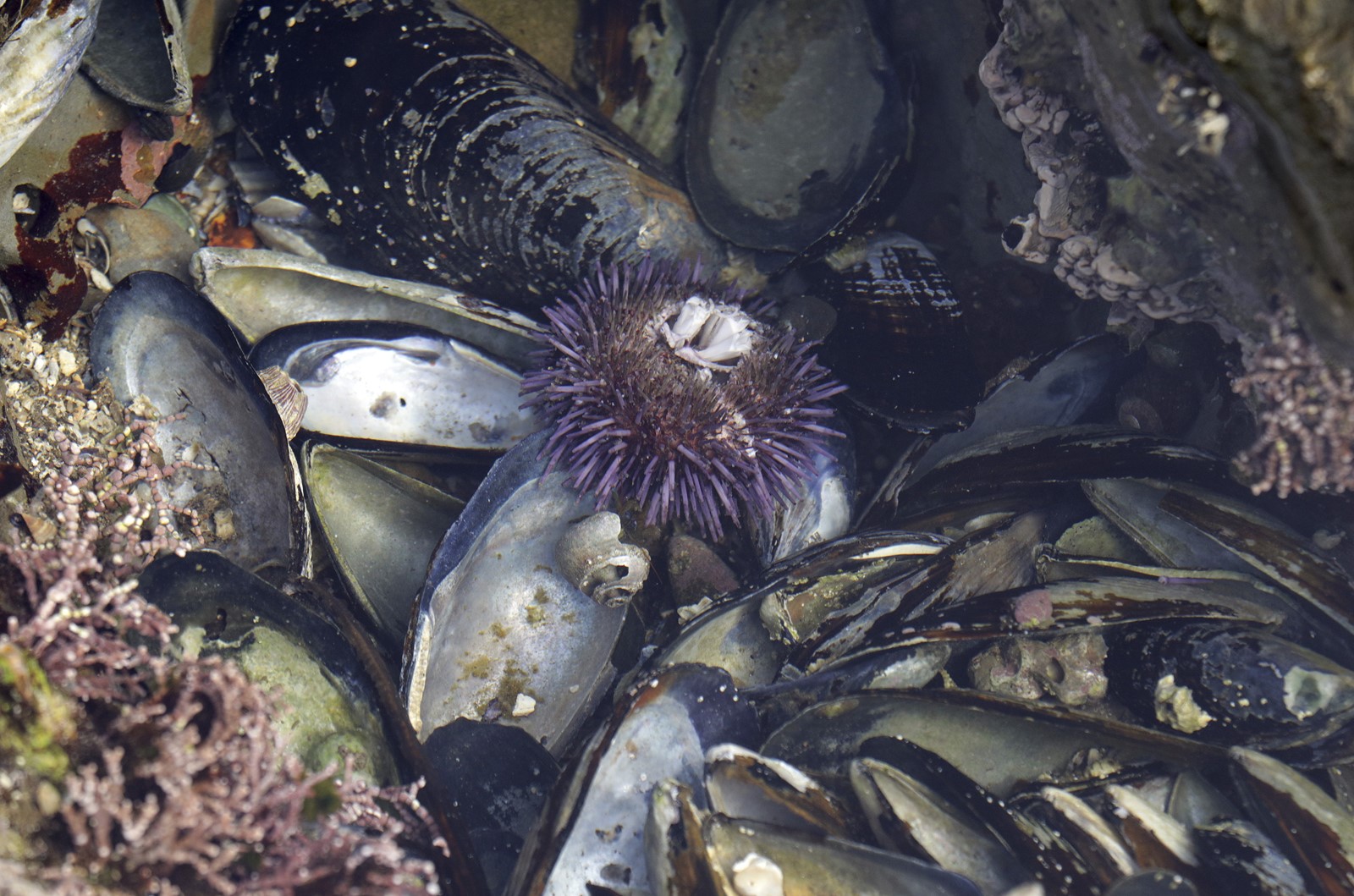 A SEA urchin grows in a White Point tide pool. Under state law, harvesters with a sportfishing license can take invertebrate animals from most tide pools. ()
PREVIOUS IMAGE

It was against the backdrop of a pounding surf one recent morning that almost 30 people had gathered on the cragged and slippery folds of White Point tidal pools in San Pedro and set to work with gardening spades, buckets and bags.

As ocean water rippled about their knees, they collected mussels, black turban snails, purple sea urchins and even a lobster. Then, as the tide began to rise, they trundled back to their cars hauling sacks, backpacks and five-gallon buckets filled with intertidal creatures.

“It’s a fun way to spend the day and grab a free dinner,” said Lisa Yan, 55, an unemployed casino card dealer. “Especially for those of us who lost jobs because of the coronavirus pandemic.... All you need is a fishing license.”

Area residents and officials say that ever since beach restrictions were lifted at this popular Palos Verdes Peninsula spot, an unprecedented number of people have been harvesting edible sea creatures — animals that had, up until recently, enjoyed relative solitude during the coronavirus lockdown.

In prior years, animal harvesting was far less common, and tidal pool etiquette held that creatures should not be disturbed.

“I’ve never seen so many people combing these tide pools for food,” said state game warden Doug Wall, who has patrolled the area for two years.

“Over the past month, I’ve issued about 30 citations for infractions in Southern California’s tide pools,” Wall said. “I had issued about 10 citations in the same areas over the previous two years.”

The recent phenomenon appears to be fueled by social media posts that encourage the practice as a way to enjoy life outdoors.

Under California law, it’s legal to take invertebrate animals from tide pools with a sportfishing license unless the pools are located within a marine reserve or other special closure.

Also, specific daily bag limits, seasonal restrictions, size requirements and outright bans apply to different species in different regions. For example, up to 35 purple sea urchins and up to 10 pounds of mussels can be taken in a single day, throughout the year. Lobsters, however, can only be taken from October to mid-March.

On a recent weekday, several recreational harvesters interviewed at White Point/Royal Palms County Beach said they had learned of the tide pools through social media. While some proudly displayed a license when asked if they had one, others sheepishly acknowledged that they did not.

Among them were four women who watched in dismay as Wall inspected sacks containing an estimated 175 pounds of mussels. The women had dropped the bags at the water’s edge after they spotted the game warden’s green pickup truck wheeling into the parking lot.

“I didn’t know I needed a fishing license,” one of the women said, shaking her head.

Area residents have taken a dim view of such scenes.

They say they worry about the environmental impacts of recreational harvesters who began showing up in May when Los Angeles County beaches were being reopened. Overnight, the largest and most accessible expanse of tidal pools in the county had become a hot spot for people using gardening tools, crowbars and screwdrivers to gather seafood, they say.

In response, residents have been posting photos and video of the tide poolers on Facebook, where they hope others will become outraged as well. The have also complained to the California Department of Fish and Wildlife through a tip line, and urged others to convey their concerns to local, state and federal lawmakers.

“This is an ethical and moral issue: These tide pools won’t survive the pressure being placed on them right now,” said Tina Parageau, 52, who lives near the pools. “At this rate, they’ll be picked clean within a few months.”

“There’s just concern about an influx of takers on the rocks at this particular beach,” the 68-year-old said. “At one time it was a coveted tide pool place where kids could see garibaldi, abalone and mussels. Now, it’s decimated.”

Scientists say tide pools offer a valuable lesson in respect for the coastal environment, and have long cautioned against touching or picking up anything in them. Even scraping a starfish off a rock and putting it back is harmful — not to mention leaving it in a bucket to die, they say.

“Certainly, tide pools can be picked clean and damaged just by walking through them,” said Bruno Pernet, a marine biology professor at Cal State Long Beach.

There are also health reasons to avoid taking live animals. An annual six-month quarantine on mussels was issued May 1 to protect the public from toxins that may be present in bivalve mollusks such as mussels, clams, oysters and scallops due to red tide conditions.

Despite a warning sign posted at the San Pedro beach, harvesters continued to pull mussels from the rocks and fill their bags, and an official there declined to take responsibility for enforcing the quarantine. In fact, law enforcement at White Point has always been muddled by confusing overlaps of city, county and state jurisdictions, as well as shifting harvesting seasons for various species.

White Point isn’t the only coastal area that has seen an increase in harvesting, according to Mike Quill, marine programs director for the nonprofit Los Angeles Waterkeeper.

“The situation along the Southern California coast has deteriorated into insane Wild West conditions,” he said.

People in boats have been poaching prized fish, including white sea bass at Point Vicente State Marine Reserve and the Abalone Cove State Marine Conservation Area, he said. Both areas are located off the coast of the Palos Verdes Peninsula. Quill and others say they believe people have become emboldened by economic hardships brought on by the pandemic.

“Their response to coronavirus restrictions has been to slam fish, lobsters, abalone and tide pool animals with what appears to be the same illogical force pushing folks to buy all the toilet paper at the supermarket — get what you can and as much as you can,” Quill said.

The trend has been particularly troubling to those who have sought to promote sustainable use of ocean resources.

“I understand the need to feed your family and pay your bills,” said Linda Chilton, education manager at USC’s Sea Grant program. “I also understand that tide pools are extraordinarily important and fragile ecosystems that help sustain biodiversity and stabilize the shoreline.

Los Angeles Waterkeeper and Sea Grant are developing public outreach programs that will include distributing handouts in English, Chinese, Korean and Spanish at popular fishing areas, including White Point and Abalone Cove.

In the meantime, state game warden Wall has his work cut out for him at White Point.

Wall spent much of two recent mornings sorting through sacks of marine creatures that had been abandoned on the beach. Wall suspects harvesters dropped the bags after they caught sight of his patrol truck.

The discarded catches included a 3-year-old lobster that he said “was taken out of season,” dozens of black turban snails, which can live 20 to 30 years, and shopping bags filled with mussels that were harvested despite quarantine warnings.

“These animals were wasted,” he said. “They won’t survive and won’t even get eaten.”