Not crazy about Biden, but fed up with Trump 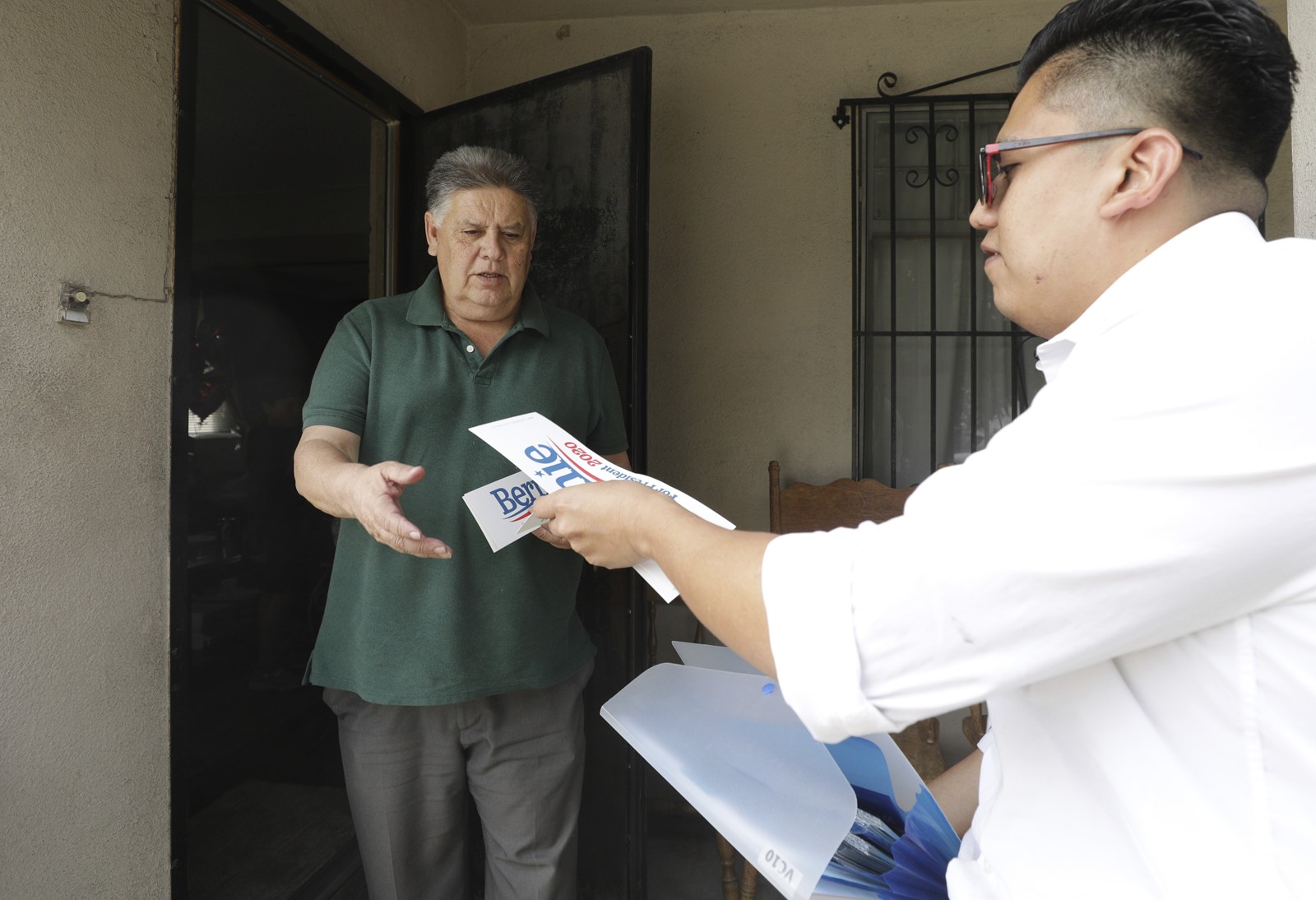 RICARDO ALONZO UGALDE, right, stumps for Bernie Sanders in February. He wasn’t sure he was going to vote after Sanders left the race. Now he’s supporting Joe Biden, despite him being too moderate for his tastes. (Myung J. Chun Los Angeles Times)
PREVIOUS IMAGE

They’re young, politically engaged, and don’t care much for President Trump. But they aren’t necessarily bowled over by Joe Biden.

So will they even vote in the presidential election, and can Biden win without them?

“If California was a swing state, I definitely would vote for Biden,” said Connie Arteaga, a 27-year-old educational aide and Commerce resident who said the Democratic candidate would be preferable to Trump on judicial appointments and other issues.

But California isn’t a swing state — Biden is expected to trounce Trump. So Arteaga — who can’t abide Trump but says Biden is way too moderate for her on healthcare, the environment and social causes — already cast a ballot without voting for president. She limited herself to local and state issues.

“For working-class people through the years,” Arteaga said, “there’s been no systematic change under Republican presidents or Democratic presidents.”

I met Arteaga back in February at Bernie Sanders’ headquarters in East Los Angeles, where she was volunteering and hoping this would be the Vermont senator’s year. Back then, a poll of California Democratic voters had Biden miles behind Sanders, and also trailing Elizabeth Warren, Mike Bloomberg and Pete Buttigieg.

Now, just over a week from election day, national polls show Biden with a lead over Trump. But in swing states, every voting demographic will be critical. And while Biden leads Trump among Black, Latino and young voters, is there enough enthusiasm to generate the big turnouts he needs?

A Politico/Morning Consult poll found that Generation Z voters, between 18 and 23, are twice as likely to vote for Biden as for Trump, and two-thirds of them disapprove of Trump’s record on racial justice and the pandemic, among other things. But a slight majority of young voters view Biden unfavorably rather than favorably, and 45% of Biden’s supporters said they’d mainly be voting against Trump.

“This will be a youth-driven election,” and voter turnout could hit historic highs, Tseng predicted, citing the pandemic, its disruption of education and its effect on job prospects for young people.

Tseng is basing that on what he sees and hears among contemporaries, and also on the results of the Harvard project’s polling in late August and early September of roughly 1,200 U.S. voters between 18 and 29.

In the poll, 63% of respondents said they would definitely vote, compared with 46% in 2016. Among likely voters, 60% like Biden, an even higher number than the 58% of young voters who liked President Obama over Sen. John McCain in 2008.

But the poll also identified one of Biden’s biggest weaknesses. While 44% of Trump supporters said they were very enthusiastic about the president, only 30% of Biden’s supporters were over the moon about him.

Still, Tseng is sticking with his prediction of a big turnout. Young people, he said, have grown up with fear of school shootings, they’ve witnessed the destructive forces of unchecked climate change, they’ve participated in demonstrations against racial and economic injustice, and they’re hungry for calm, sure-handed leadership on the pandemic and its impact on the economy.

No doubt, Trump has plenty of young supporters in California and other states. But as the polls suggest, Biden is winning the youth vote, while the race is much tighter among older Americans.

I may be jaded, as the father of a 17-year-old, but the older I get, the more convinced I am that young people are our best hope to heal a corrosively divided country. They tend to be more open-minded about race and gender, they’re fed up with blatant lies and empty promises, they’re tired of being ignored and they’ve taken to the streets to be heard.

It’s hard for many of them to fathom how we could have a president who turned the White House into a COVID-19 hot spot while refusing to wear a mask and referring to public health experts as idiots, even as more dead are buried and the virus surges. Trump has lorded over a voter suppression campaign and been cheered by white supremacists while claiming he’s done more for Black people than anyone except Abraham Lincoln. It’s head-snapping lunacy, and the act has worn thin.

“It seems like young people of all ages are fed up,” said 31-year-old Kirstie Jeffries, a digital marketing professional and travel blogger who lives in Studio City.

Joe Biden was not her guy a few months ago, but Jeffries has already cast an early vote for him. When I first spoke to her, back in February, she was volunteering for the Elizabeth Warren campaign.

“As far as I know, all of my friends are voting, and they’re voting for Biden regardless of who they supported in the primary. Even if they’re not excited about Biden, they’re happy to be voting for anyone who is not Trump,” said Jeffries, adding that some of her Republican friends who supported Trump four years ago have reregistered as independents because of him.

“He’s made it OK to be openly racist and bigoted, and that’s really scary,” Jeffries said. “And climate change, of course, is so time-sensitive, we need to be figuring it out now. We can’t wait four more years.”

Ricardo Alonzo Ugalde, a 36-year-old electrical and software engineer who owns his own company in Montebello, was not planning to vote for Biden. He was Bernie-or-bust when I met him in February and followed him as he knocked on doors for Sanders. Alonzo Ugalde wants to see big changes on climate, immigration reform and the staggering gaps in income, wealth and opportunity. He wasn’t sure he was going to vote for president when Sanders dropped out of the race.

But when I checked in with him a few days ago, Alonzo Ugalde had some news.

It’s not that he’s become a big fan; Biden is too moderate for his tastes.

It’s that “as someone who studies and loves science, it’s hard to fathom that we live in a country where people are anti-science.”

It’s that he can never forgive some of Trump’s most inflammatory remarks — “My dad is a Mexican; is my dad a rapist? I’m an immigrant; am I a rapist?” — and he can never forget how such purposely divisive rhetoric sealed the support of so many people.

And it’s Trump’s lack of empathy and adult behavior on the coronavirus, which has disproportionately hit low-income people of color.

There has been one positive in the last four years, Alonzo Ugalde said. Trump’s presidency has awakened his young relatives and friends, turned young bystanders into activists, and brought them to a common cause.

“We’ve gotta get this guy out of the White House.”