Open only a year, Shawarma Guys is named the country’s No. 1 place to eat in 2020 by Yelp 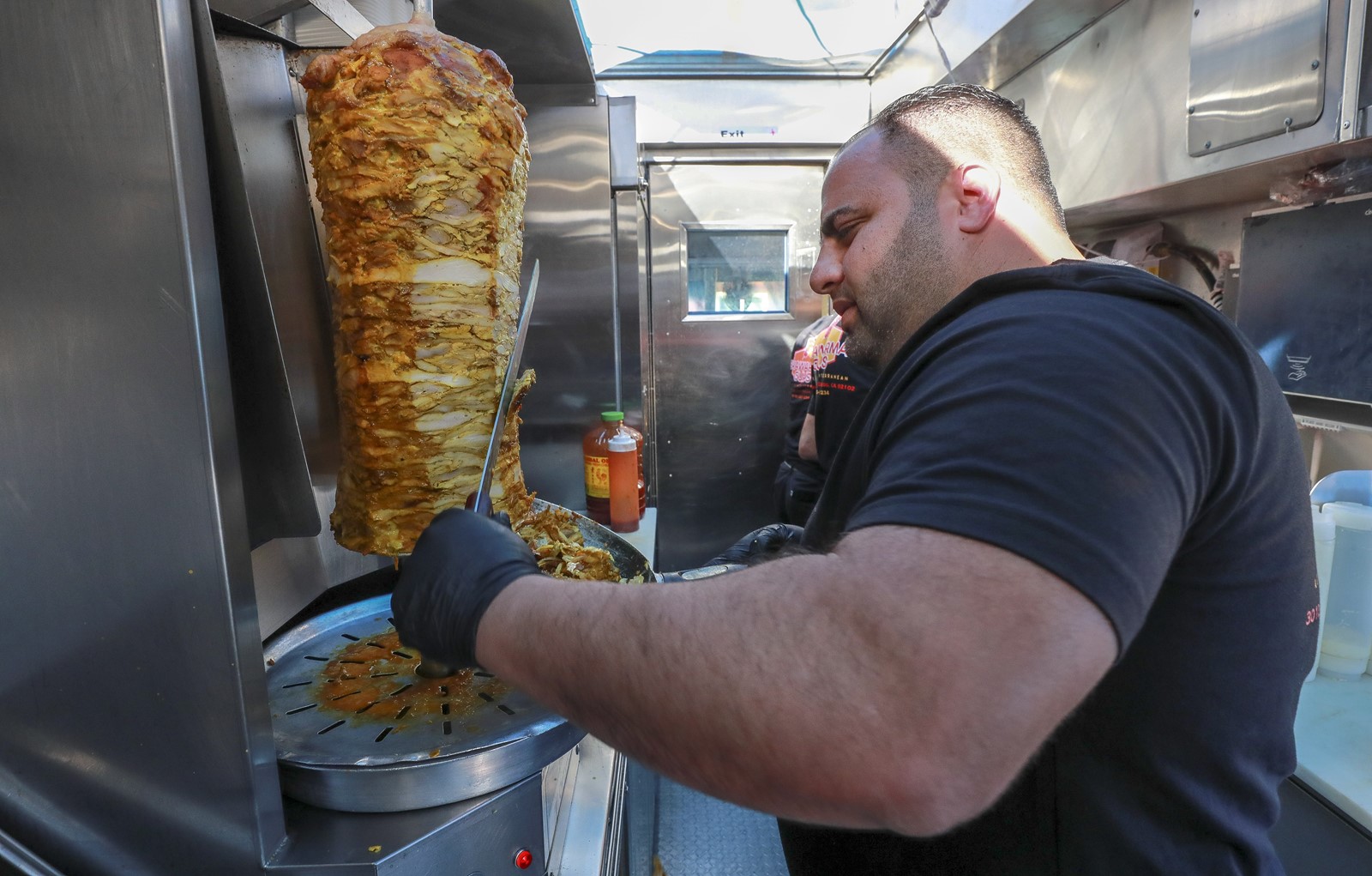 BRYAN ZETO, owner of the Shawarma Guys food truck, carves chicken shawarma from the spit Saturday. Zeto opened the food truck in January 2019 and quickly started doing brisk business. He was hoping to crack Yelp’s top 100 list and was shocked to be named No. 1. (Photographs by Hayne Palmour IV San Diego Union-Tribune) 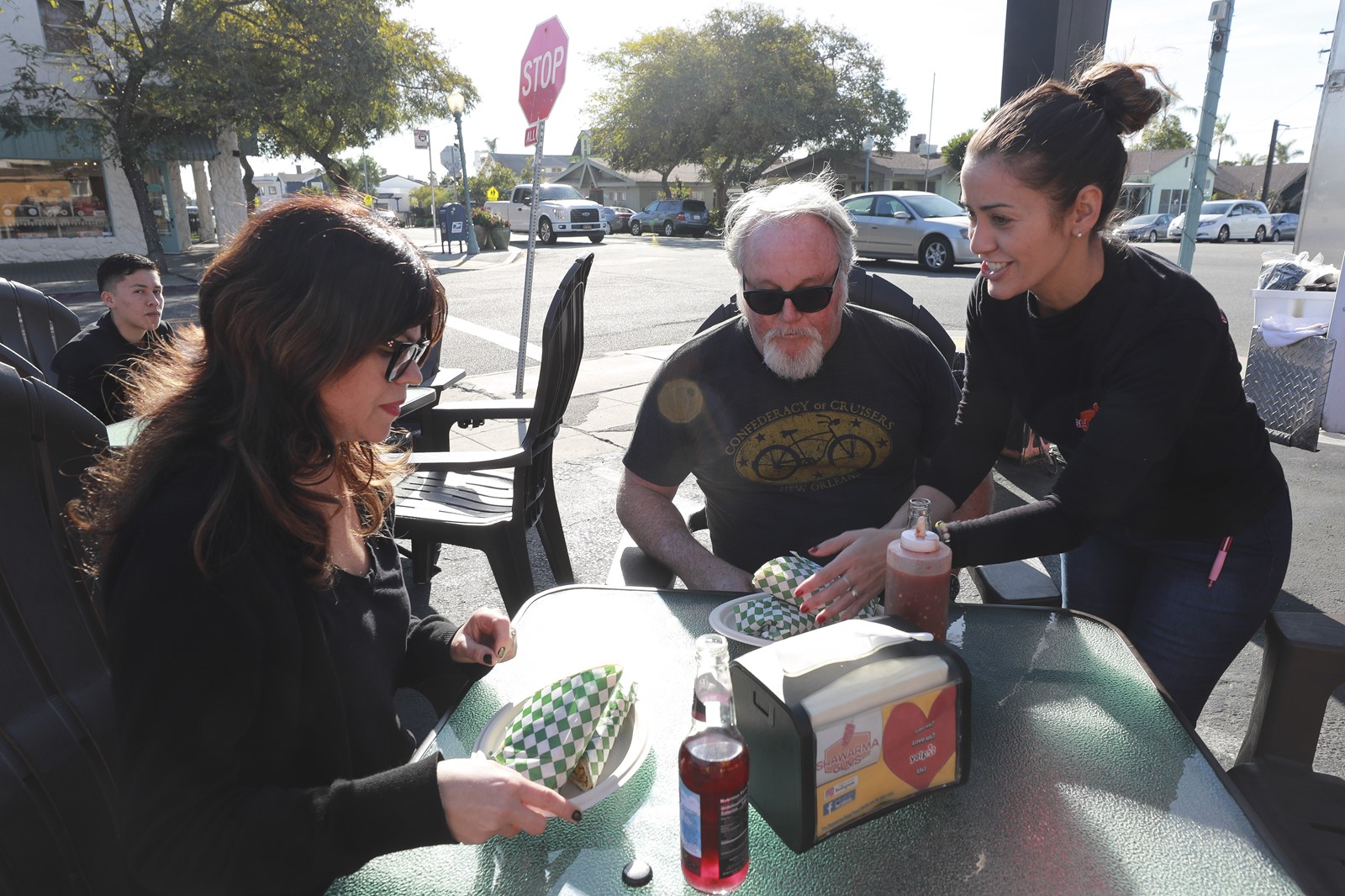 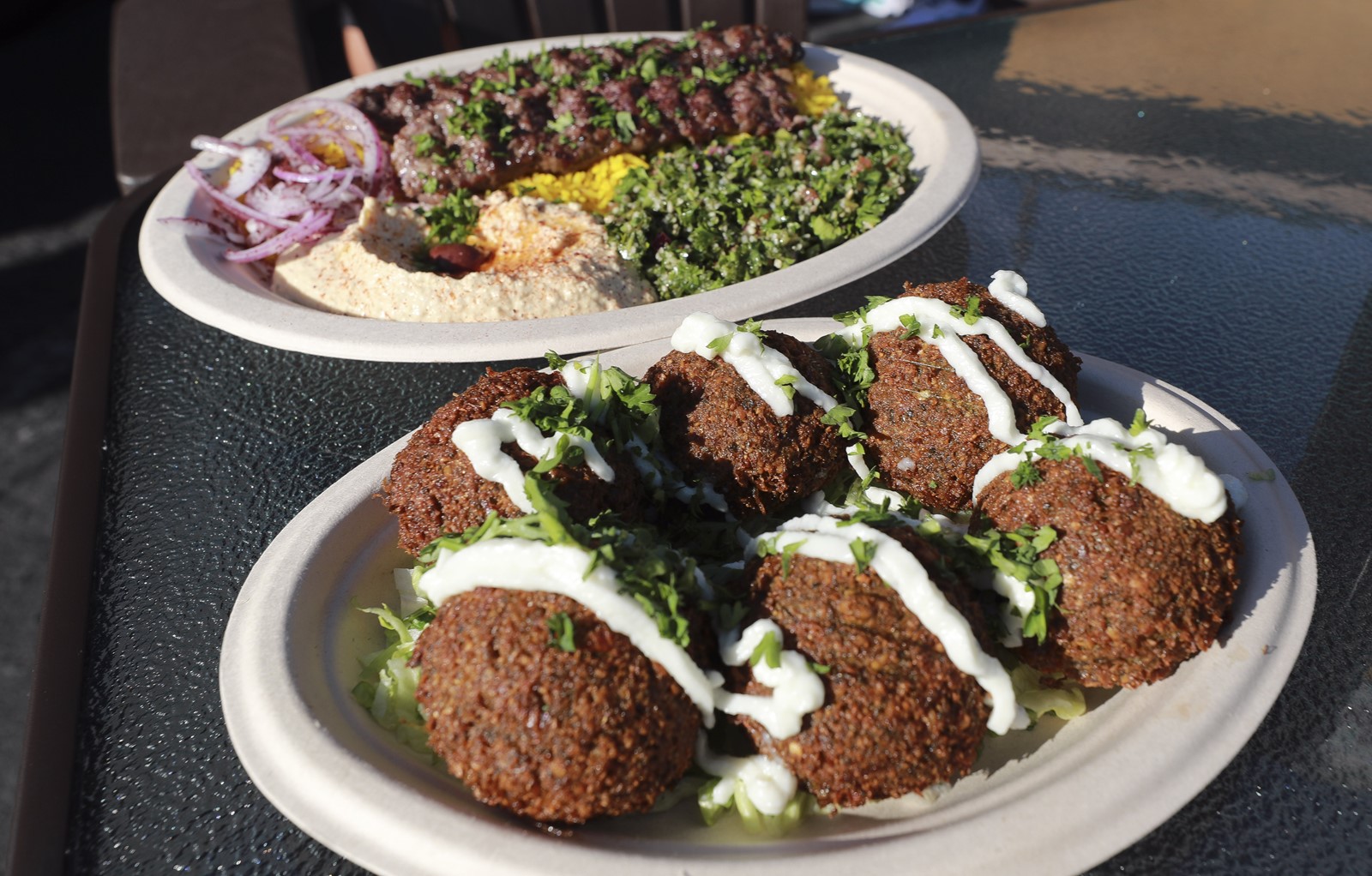 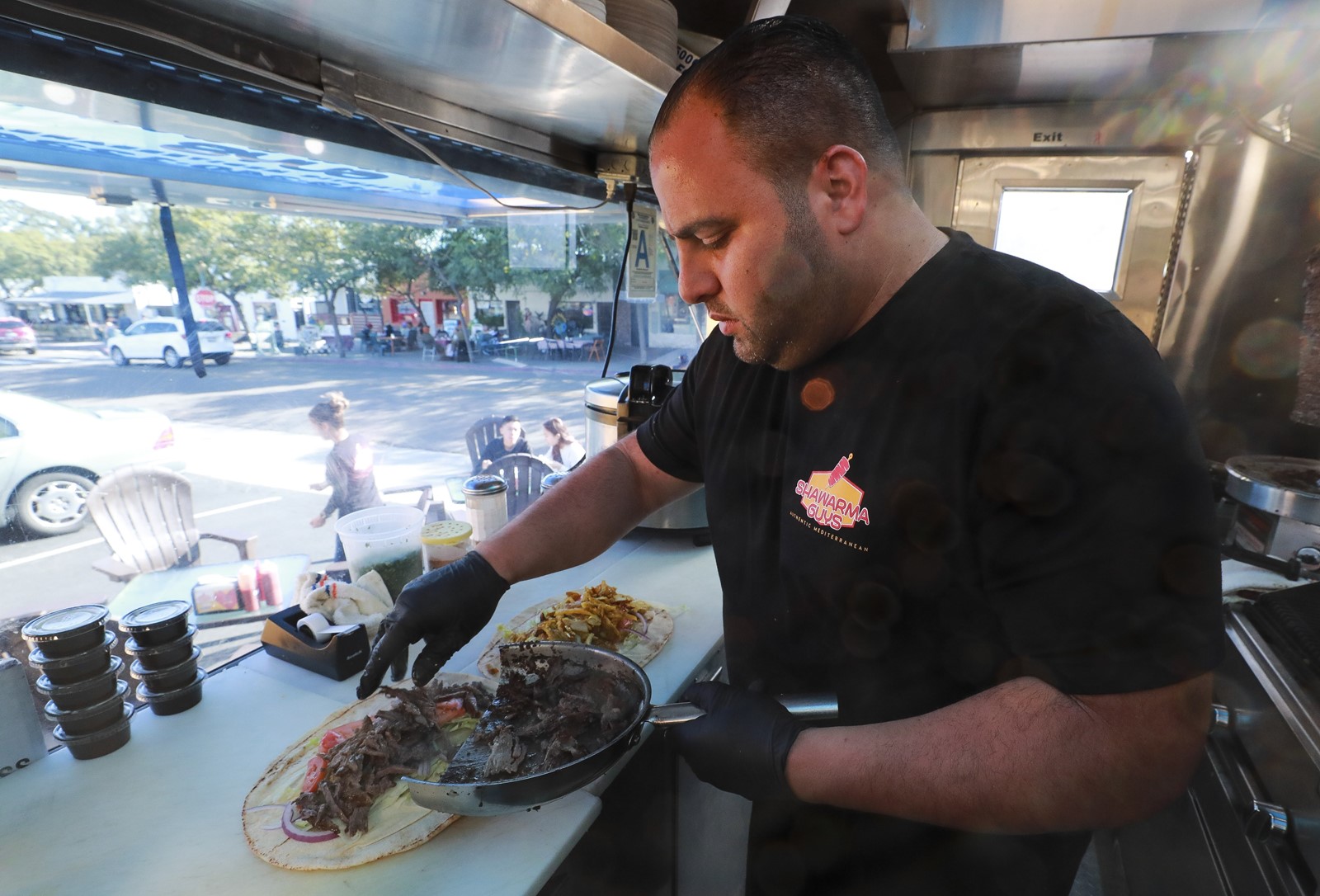 AFTER a year of strong sales, Zeto hopes to open a brick-and-mortar location by May. Within five years, his goal is to open 10 restaurants in Southern California. ()
PREVIOUS IMAGE

Last year, former cellphone salesman Bryan Zeto achieved his lifelong dream of opening his own restaurant. Today, his Shawarma Guys food truck in the San Diego neighborhood of South Park sits at the pinnacle of Yelp’s list of the top 100 places to eat in the U.S. in 2020.

Shawarma Guys, parked in front of the Bottle House liquor store at Grape and Fern streets, ranks No. 1 on the seventh annual list, published Tuesday by the crowdsourced rankings website Yelp.com. In its first 11 months of business, Shawarma Guys achieved a top ranking of five stars in nearly all of its almost 500 customer reviews.

For Zeto, 34 — who lives in Rancho San Diego with his wife, Reta, and their 21-month-old daughter Sloan — earning the prestigious honor was an astonishing turn of events. Merely hoping to make it into this year’s top 100 list, he was given news of his first-place finish late last month during an on-camera interview with Yelp’s regional team.

“I think I cussed on camera, I was so shocked,” Zeto said. “It was a validation that my hard work had paid off. All year long I’ve been working 13 to 14 hours a day with the goal of making sure that everybody leaves here happy.”

Unlike the “best of” restaurant rankings found on many travel websites, chances are you may have never heard of many of the finalists on Yelp’s list. Yelp comes up with its list based on a formula that looks at a restaurant’s number of five-star rankings and reviews. Extra weight is given to up-and-coming neighborhood restaurants that may not receive the same volume of business and reviews as larger, more established institutions. As a result, many of Yelp’s top 100 are small, family-run eateries.

Two other San Diego County restaurants also made this year’s list. No. 9 is Soichi Sushi in Parkcrest, an omakase-style fine-dining Japanese restaurant opened in March by former Sushi Tadakoro chef Soichi Kadoya. And No. 26 is Mr. Bibi, a Korean fast-casual restaurant in Oceanside that opened in June.

Danny Wurst, a San Diego community manager for Yelp, said the reason mom-and-pop shops are so heavily represented on the annual list is that they treat their customers like family, and the welcoming environment prompts customers to share their experiences online. Wurst said Zeto epitomizes the family service ethos.

“Very rarely will you visit Shawarma Guys and not see him there. That really speaks volumes to why it’s run so well and people love it so much. He makes sure to add his signature touch to everything,” Wurst said. “It’s an awesome business, and he’s a really great and humble guy.”

Earning the Yelp award is just the latest honor for Shawarma Guys. In the last year, it has also been rated the best food truck in California by Redbook and Yelp, and San Diego Magazine named it the city’s best Mediterranean food truck in 2019.

Zeto said he realized almost immediately after opening Shawarma Guys last January that he needed to get out of the truck to meet his customers face to face. Now, all customer orders are taken and delivered by an employee in the parking lot with a hand-held point-of-sale tablet. And whenever he’s not making food, Zeto is also in the parking lot talking to his customers. Several regulars on Saturday said that Zeto always greets local customers by name, knows most of their usual orders and sets aside treats for their dogs.

Zeto was born and raised in an Iraqi Chaldean neighborhood of Detroit. When he was 11, his family moved to eastern San Diego County, where as a teen he started working in the family business selling paging devices and later running his own business selling cellphones in bulk.

From an early age, he loved to cook and became known among his friends for his barbecuing expertise. One of those friends was Steven Hirmez, who owns the Bottle House.

“He has always had a passion for cooking,” Hirmez said. “I would always go to his house and he’d be cooking Wagyu this and Wagyu that. He always made great meals for me and our friends and he always talked about opening his own restaurant.”

When Zeto started looking for a restaurant building in 2018, Hirmez offered him a less risky solution. Why not test the waters first with a food truck that he could park in the Bottle House parking lot? Hirmez also talked Zeto out of his initial idea of opening a taco truck.

“I said, ‘Bro, in South Park there are eight Italian restaurants, two taco shops and fish trucks all up and down 30th Street. You can’t do that.’ Instead he came up with the shawarma idea, and the neighborhood is loving and appreciating it,” Hirmez said.

After two months of round-the-clock recipe testing and experimentation, Zeto opened Shawarma Guys on Jan. 23, 2019. The other “guy” in the title is his father, Samer Zeto, who helps out on busy days. Bryan Zeto said he expected to sell maybe $200 of orders a day in the opening weeks. Instead, he hit his six-month sales goal after 45 days.

Everything except the dolmas (rolled grape leaves) is made in-house, including the hummus, tabbouleh salad and extra-spicy hot sauce. The shawarma, seasoned meat slow-cooked on a vertical rotisserie, is made with heavily marbled Wagyu beef from Australia. Zeto imports about 1,000 pounds of the Wagyu each month, and what isn’t made into shawarma is sold online.

He also sells chicken shawarma and breaded and vegan chicken options as well as weekend specials like filet mignon kabobs and Wagyu tikka plates. Vegans and gluten-free diners drive from as far as Chula Vista and Temecula for his falafel, the deep-fried chickpea balls that he stuffs with fresh greens and a touch of jalapeño/habanero pepper sauce, then tops with creamy garlic sauce. The food is all halal certified. One thing Zeto doesn’t sell is drinks, per his lease agreement with the Bottle Shop, which is doing a brisk business on soft drink sales during the lunch and dinner hours.

Among the truck’s regular customers are South Park residents Suzanne Delach and David Lee, who said on Saturday that they love the flavorful beef shawarma and the extra-crunchy and well-seasoned falafel. Another South Park regular, Amanda Aultman, said she loves the beef shawarma and the off-menu specials that Zeto’s team will make to order, like savory Philly cheesesteak egg rolls.

“Outside of it being delicious, it’s really convenient and the staff is so friendly,” Aultman said.

Sales have been so strong that Zeto now hopes to open a brick-and-mortar location by May. He’s looking at locations in South Park, Clairemont, North Park and Barrio Logan.

His five-year goal is to open 10 Shawarma Guys restaurants in Southern California. In the meantime, he plans to expand his truck hours in February to seven days a week (it’s now closed on Sundays) and continue earning five-star reviews.

“My goal is to just keep delivering the best quality food and the best customer service,” he said. “I don’t want to ever give people any reason to complain.”