Trump campaigns on more of the same

and ‘Build the wall.’ 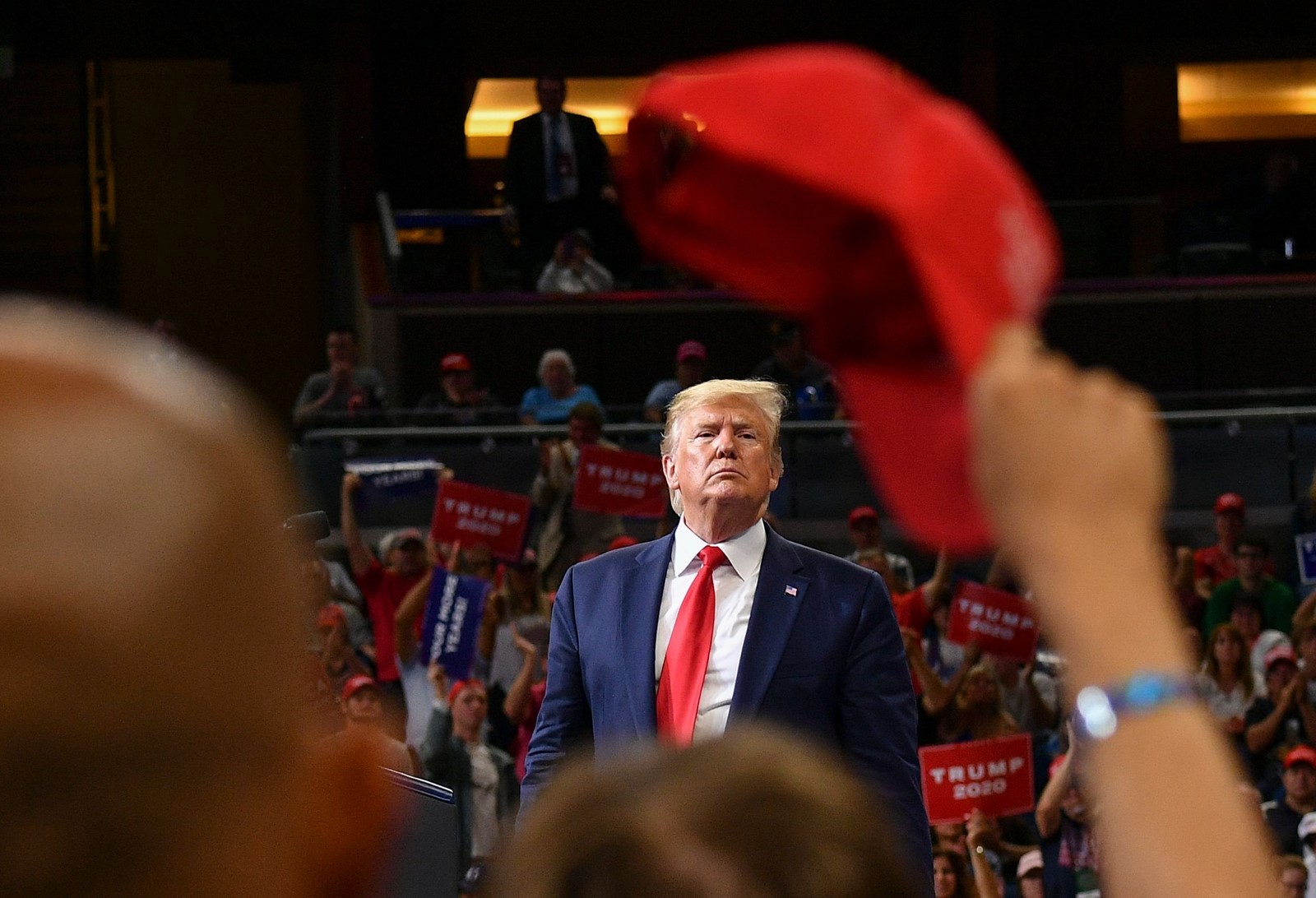 As Democratic presidential contenders race to draft the boldest and most detailed policy plans, President Trump has stuck to the signature short, striking phrases that helped him win last time: “Build the wall,” “jobs, jobs, jobs” and “America first.”

In other words, the agenda for Trump’s second term is largely a set of pithy slogans that have been crowd-tested at rallies and have defined Trump’s governing style since he first announced his unlikely bid for the presidency in 2015.

Aides, allies and adversaries expect more of the same as Trump campaigns for 2020. Not a lot of what George H.W. Bush called “the vision thing” this time around. No “Bridge to the 21st Century,” as Bill Clinton dubbed his second-term agenda.

Until Trump fully reshapes immigration and trade, as he promised to do in 2016 — and as long as the economy keeps growing — he is likely to keep offering the same rallying cries.

As one supporter put it at a May 8 rally in Panama City Beach, Fla.: “Just keep doing what he’s doing.”

Trump did just that at his official reelection kickoff rally in Orlando, Fla., last month, conjuring an homage to his 2016 victory that included chants of “Lock her up” and accusations that Democrats and the media were trying to “erase” the “greatest campaign and the greatest election probably in the history of our country.”

The backward-looking strategy carries some risk. Elections are often defined as debates about the future and opportunities to set the governing agenda for Congress. They ultimately are about change — or continuity.

And Trump, who has registered low approval ratings since taking office, faces highly motivated Democrats, meaning he will need to win at least some converts to repeat his narrow electoral triumph.

But the old game plan matches Trump’s instincts and may be his best play. Trump won last time with few policy details, instead offering broad themes, a heavy dose of nostalgia for a certain idea of midcentury America and a brand built around his outsized persona.

“He’s a reinforcer of motto, not an innovator of new policies,” said Douglas Brinkley, a presidential historian.

“He’s not a guy who necessarily runs on agendas as much as raw nerve endings,” said David Axelrod, President Obama’s chief political advisor.

Trump has oriented his first term around proving to his core supporters that he has kept promises.

His campaign website lacks new initiatives, but it includes lengthy “promises kept” checklists intended to bolster the argument that he has altered nearly every aspect of domestic and foreign policy.

Many claims lack the substance that Trump says, but almost all of them point to his central “Make America great again” slogan.

His campaign advisors believe his reelection depends on motivating those core voters and defining his Democratic opponent, whoever it is, as a far-left socialist who will endanger America.

“Every moment that the Democrats are on the debate stage, the president is winning,” said Marc Lotter, director of strategic communications for the Trump campaign.

While Trump has been stymied on many of his legislative goals — most notably the proposed wall on the southwest border that he vowed would be paid for by Mexico — he has channeled those failures into attacks against his enemies and urged voters to let him finish the job with a second term.

Even issues where he has been fairly successful are used by Trump as calls for urgency.

Though he solidified conservative dominance of the federal judiciary with two confirmed Supreme Court justices and a slew of lower-court appointments, he used recent adverse rulings on healthcare and immigration to reinforce how important a second term would be for appointing even more conservative justices.

“Every first-term president tries to accomplish as much as he can in the first term and [Trump has] accomplished enormous numbers of things, but there’s always more work to do,” said Corey Lewandowski, who was Trump’s campaign manager for part of his 2016 run and remains an informal advisor.

Lewandowski said that Trump is unlikely to unveil “some new novel theme. It continues to be the ‘America first’ presidency.”

Trump also has the benefit of high economic growth and low unemployment.

“When you’re running on a great economy and you’re not at war, that’s what your policy is,” Brinkley said.

In that sense, Trump is not unusual. When an incumbent is running for president, the pressure is almost always on the challenger to form plans while the president defends his record.

Lanhee Chen learned that lesson in 2012, when he led the policy team for Mitt Romney’s challenge to Obama. Romney released lengthy treatises and delivered major addresses to think tanks.

“We were constantly assailing Obama for not saying what he was going to do in the second term,” Chen said.

Obama eventually released more detailed plans, many of them rehashes of things he had already talked about. It didn’t matter much to voters.

“For the American people, that bumper-sticker policy is probably a lot more meaningful,” Chen said. “For most people, that’s how they consume policy.”

Trump’s advisors say that while nothing has been decided, the one issue in which he is likely to offer a new agenda is healthcare.

Polls show Democrats have an advantage there, and Republican attempts to dismantle the Affordable Care Act have proven unpopular. If courts agree with a challenge supported by Trump’s Justice Department, the issue will become even more prominent.

A campaign advisor in Trump’s 2016 and 2020 campaigns said the president needed to show a more “family friendly” side to appeal to suburban women, many of whom defected from him in 2016 and from his party in the 2018 midterm election. The advisor, who requested anonymity to discuss strategy, said that includes better healthcare proposals.

Trump might also propose an expansion to his first-term tax cut that would help families more. While the 2017 bill skewed mostly toward corporations and the wealthy, it included a child credit that Trump has tried to promote as a victory for the middle class.

Ari Fleischer, former press secretary to President George W. Bush, said reelection campaigns are “a cocktail” made with a sprinkle of new policy proposals, a larger dollop of contrast with the challenger and, most significantly, an argument that the president has moved the country in the right direction.

Trump’s “cocktail has a stronger dash of ingredients than most” because he elicits such disparate reactions from voters, Fleischer said.

“Don’t be mistaken,” he added. “The president’s strength and/or weakness is his personality.”