Deep divide on State of the Union

Trump pitches economic optimism and his reelection before a bitterly divided Congress on the eve of the Senate’s impeachment vote. 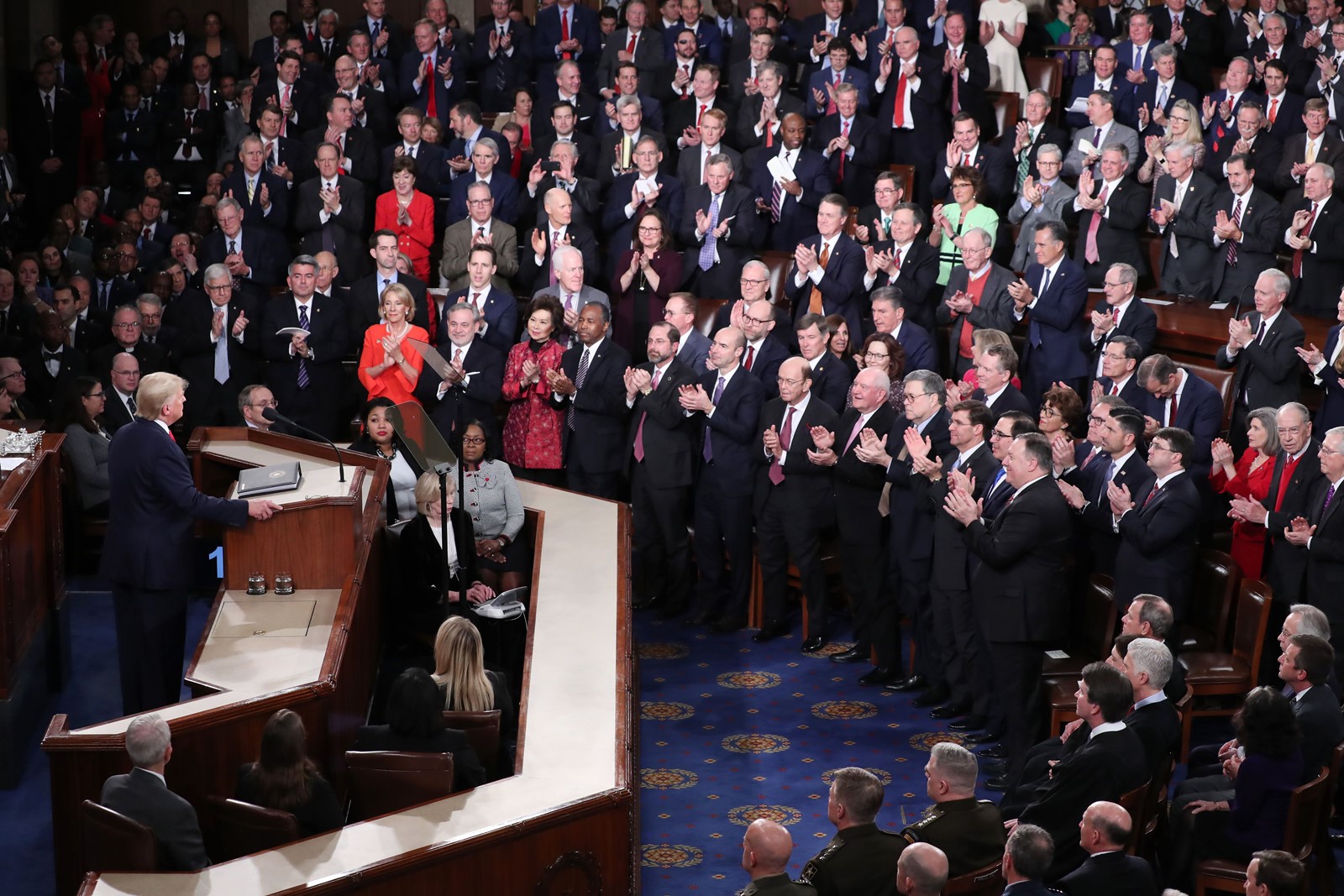 “THE STATE OF OUR UNION is stronger than ever before,” President Trump boasted after Republicans chanted “four more years!” As his language sharpened, Democrats’ mood soured, and at least two walked out. “It’s like watching professional wrestling. It’s all fake,” one tweeted. (Michael Reynolds EPA/Shutterstock) 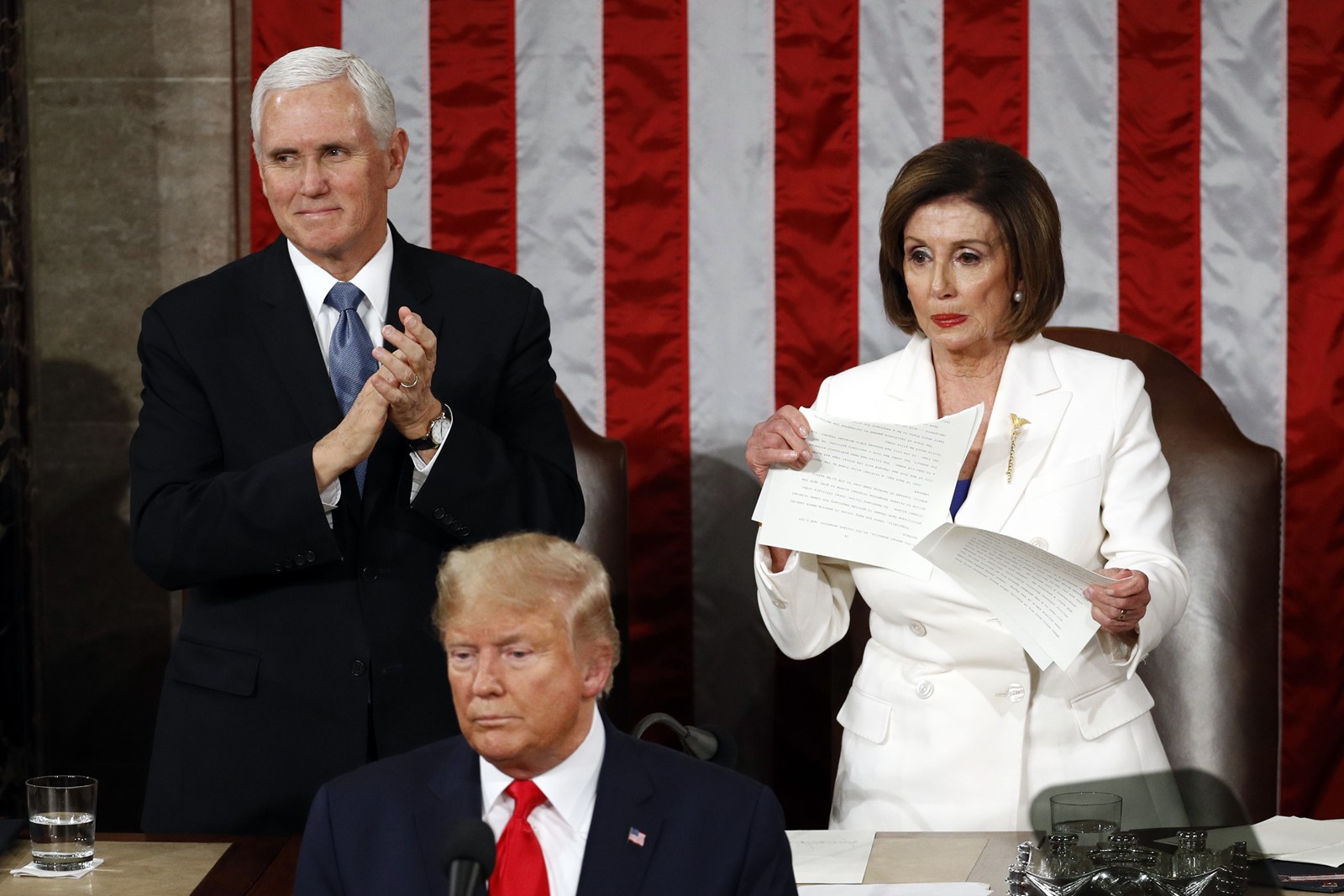 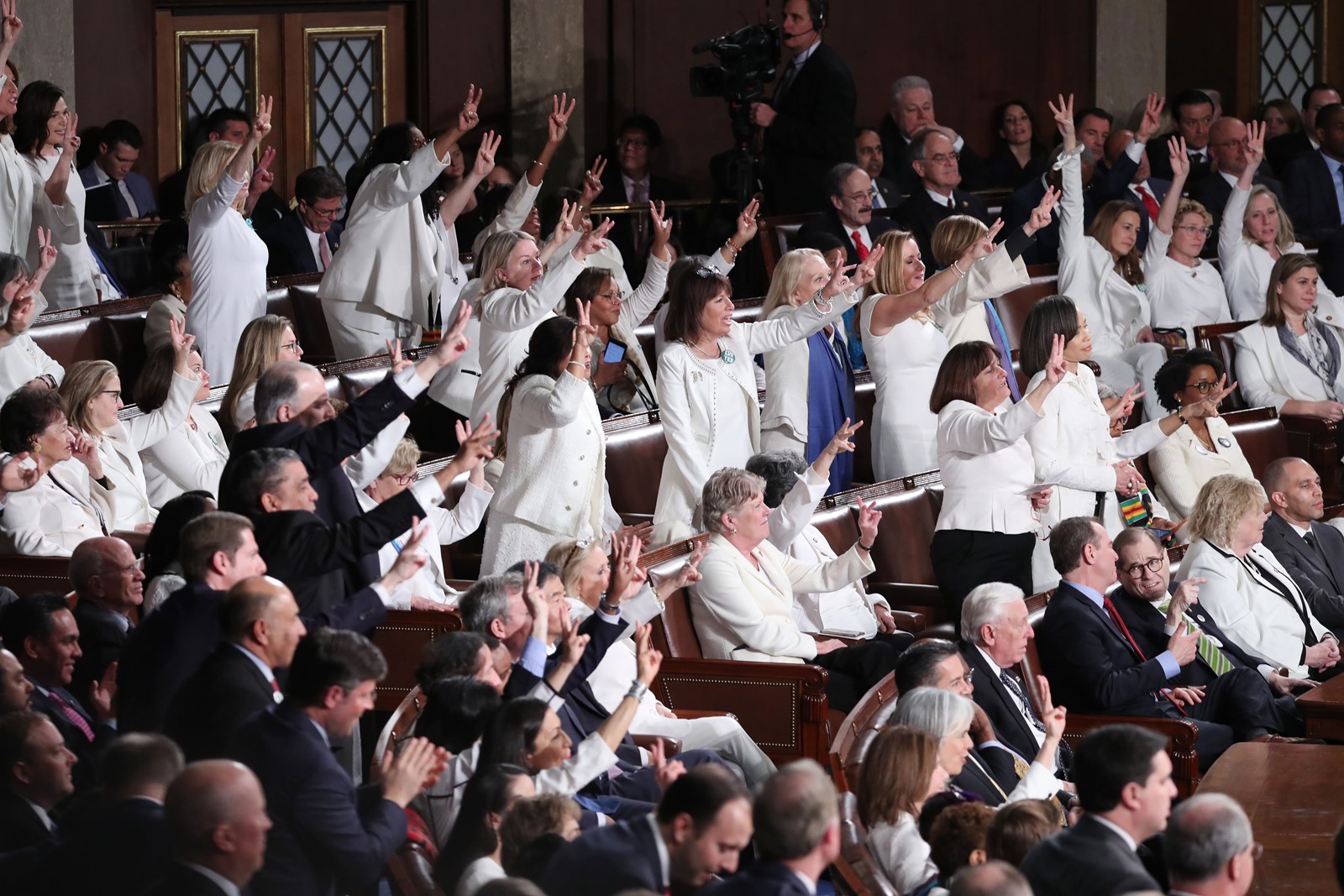 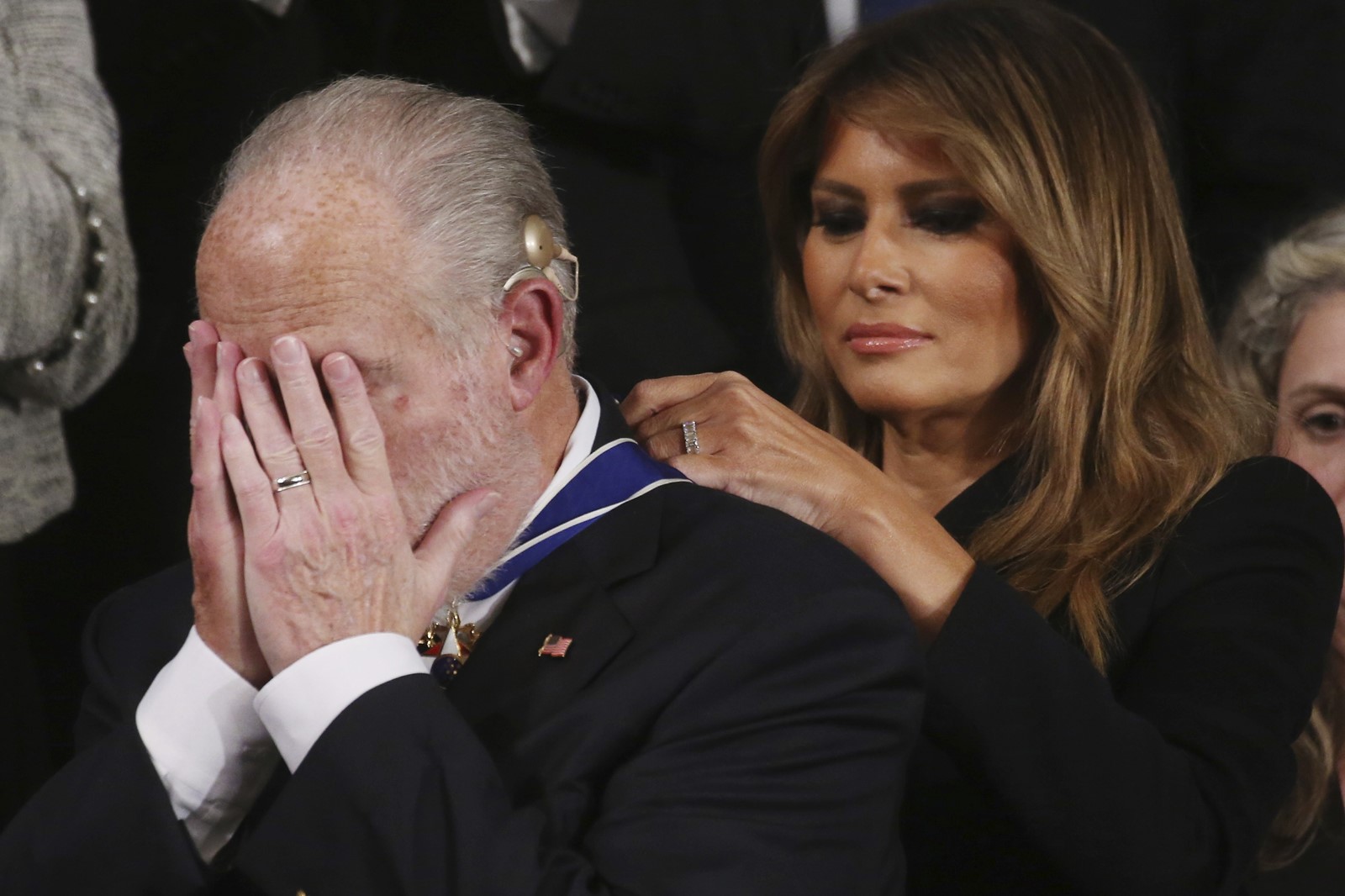 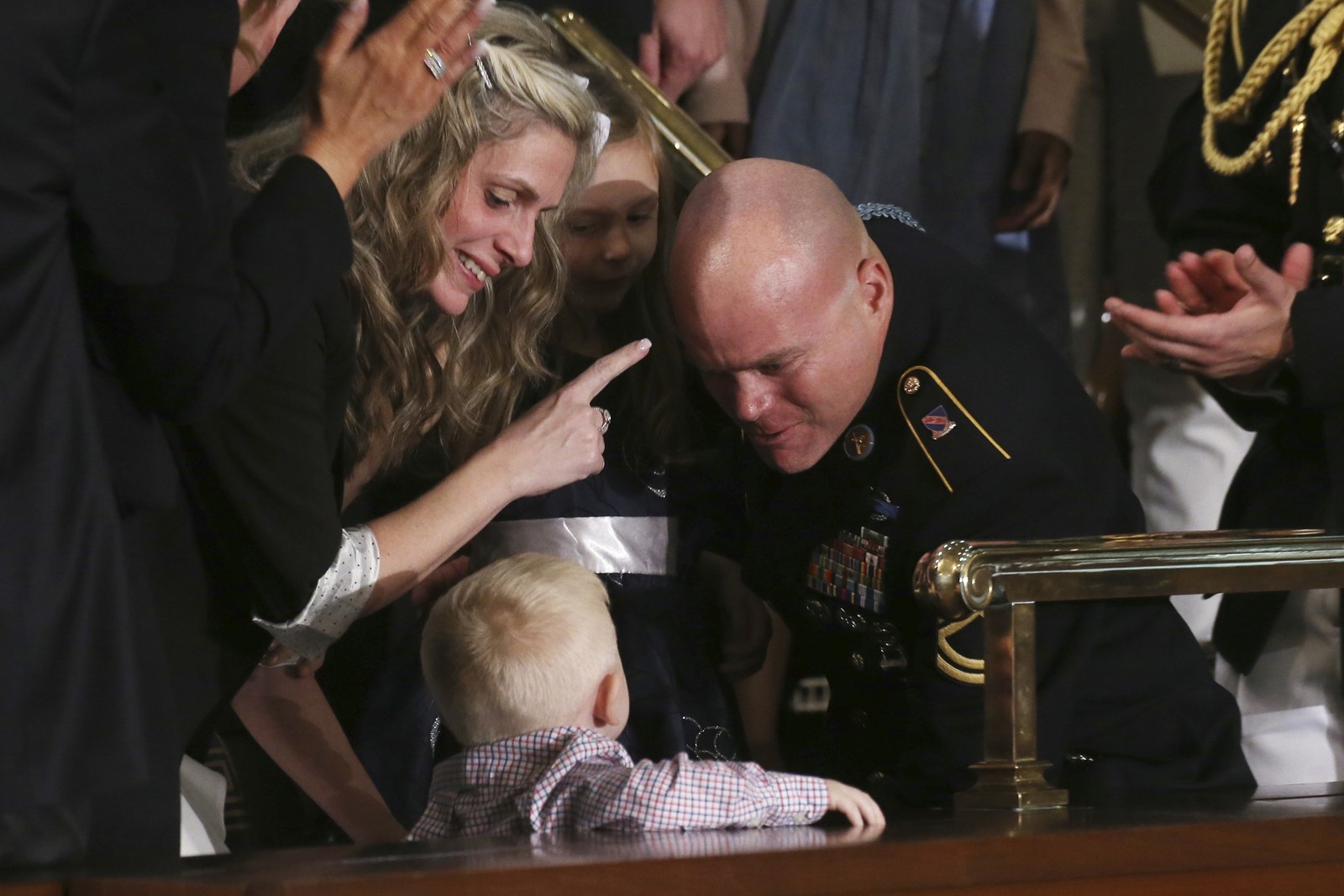 President Trump highlighted economic gains and his reelection bid in a sweeping State of the Union address on Tuesday, but his impeachment overshadowed the text as the traditional address to a joint session of Congress devolved into theatrical outbursts and unmasked partisan disdain.

“The state of our union is stronger than ever before,” Trump declared, adding hyperbole to the standard presidential claim.

But the timing and the setting offered a starkly competing message. Trump stood in the House rostrum seven weeks after House Democrats voted to impeach him for abuse of office and obstruction of Congress. On Wednesday, the Republican-controlled Senate is all but certain to acquit him after the shortest presidential impeachment trial in U.S. history.

He did not mention his impeachment in the hour-and-18-minute speech, but when House Speaker Nancy Pelosi (D-San Francisco) extended her hand in greeting before he began, he did not take it, a break with protocol that spoke volumes about the bitter divisions that have deepened during his turbulent presidency.

Apparently in response, Pelosi, who sat behind the president, stood up and dramatically ripped her printed copy of his speech in half when he finished speaking, a sign of disrespect equally stunning for the most powerful Democrat in Congress, as he paced just in front of her, basking in applause from the GOP side of the chamber.

In his remarks, rather than urging lawmakers to work together, Trump took credit mostly for work already done, criticizing and sometimes distorting Democrats’ positions on immigration and healthcare.

As his language became increasingly sharp-edged, the mood in the chamber soured. Democrats made little effort to hide their eye-rolls and visceral reactions.

When Trump urged Congress to work on legislation to lower the cost of prescription drugs, Democrats stood and chanted “H.R. 3,” waving three fingers at the president to call attention to their existing legislation addressing the issue.

They booed and groaned when he promised he “will always protect patients with preexisting conditions,” unabashedly declaring, “There are those who want to take away your healthcare.”

Many Democrats, incensed because Trump is currently suing to overturn the Affordable Care Act, including the provision that guarantees coverage for people with preexisting conditions, shouted back at the president: “You!”

The first president who came to office after hosting a reality television show once again showed his ability to produce dramatic, even heart-rending, made-for-TV moments.

Trump invited a Venezuelan opposition leader to sit in the audience, awarded a Medal of Freedom on the spot to cancer-stricken controversial talk radio host Rush Limbaugh, and orchestrated a surprise reunion of a soldier who had been on his fourth deployment to the Middle East with his tearful wife, who was seated in the gallery.

By the time of the reunion, at least two Democratic lawmakers had already walked out, noting their departures on Twitter.

In his remarks, Trump contrasted his record with President Obama’s, blaming his predecessor for a decline in the workforce that was largely triggered by the recession that began before Obama took office in 2009, and taking credit for recent gains.

“From the instant I took office, I moved rapidly to revive the U.S. economy — slashing a record number of job-killing regulations, enacting historic and record-setting tax cuts, and fighting for fair and reciprocal trade agreements,” Trump said.

Democrats sat without clapping as the president recited a litany of economic and jobs numbers.

“This is a blue-collar boom,” Trump said, pointing to a rise in median household income and the steady rise of the nation’s stock market since he took office.

“In just three short years, we have shattered the mentality of American decline and we have rejected the downsizing of America’s destiny,” he said. “We are moving forward at a pace that was unimaginable just a short time ago, and we are never going back!”

Drawing another battle line ahead of the November election, Trump promoted school voucher programs that have long been a priority for traditional conservatives, derisively labeling public schools as “government schools” and calling on Congress to pass a bill that would allow the use of vouchers at the federal level “to rescue” students left on waiting lists for state scholarships.

He panned the “Medicare for all” proposals backed by two Democratic presidential hopefuls, Sens. Bernie Sanders of Vermont and Elizabeth Warren of Massachusetts.

“We will never let socialism destroy American healthcare!” he said, before pivoting to an even more controversial assertion, claiming that support for a government takeover of healthcare would lead to “free government healthcare for illegal aliens.”

He also cited milestone accomplishments on trade talks and national security, including the CIA-led raid that left Islamic State founder Abu Bakr Baghdadi dead in Syria, and the U.S. drone strike in Iraq that killed Iranian Gen. Qassem Suleimani, whom he called “a ruthless butcher.”

In another unexpected move, Trump recognized Limbaugh, who announced Monday that he is fighting advanced lung cancer and appeared frail. Trump said he was awarding him the Presidential Medal of Freedom, the highest civilian honor, and then looked up to the balcony as First Lady Melania Trump put the medal around Limbaugh’s neck.

As he embraced the pageantry and spectacle of the annual televised address, Trump aimed to define himself as a Washington outsider fighting a thicket of partisan opposition to bring the changes his supporters want.

And he presented his accomplishments — namely, a revised North American trade agreement and criminal justice reform — as priorities that his predecessors failed to get done.

Trump’s signature on the U.S. trade deal with Canada and Mexico last week marked one of his most concrete accomplishments, and he said it showed he had delivered on his pledges to retool America’s trade relationships.

“Many politicians came and went, pledging to change or replace NAFTA — only to do absolutely nothing. But unlike so many who came before me, I keep my promises,” he said.

For the second year in a row, a large group of Democratic women wore all white to honor the women’s suffrage movement, which is celebrating its centennial, and in apparent protest of the president.

Several Democratic members of Congress boycotted Trump’s address, including Reps. Steve Cohen (D-Tenn.) and Ayanna Pressley (D-Mass.). Some who attended protested Trump’s environmental policies by wearing pins showing a graphic representation of how much the planet has warmed since 1850.

“We are wearing these climate pins to send the message that Americans will not hear from President Trump tonight: Climate change is real. We need to act, and we need to act now,” said Sen. Thomas R. Carper (D-Del.).

In the Democratic response to Trump’s address, Michigan Gov. Gretchen Whitmer said she wanted to focus on working-class struggles and healthcare.

“It doesn’t matter what the president says about the stock market. What matters is that millions of people struggle to get by or don’t have enough money at the end of the month after paying for transportation, student loans or prescription drugs,” she said.

The Democrats’ impeachment effort may have given Trump a slight lift, at least for now.

In recent weeks, Trump’s support has risen slightly as he has showcased policy wins on trade and foreign policy while Democrats pressed their impeachment case in the Senate. A Gallup tracking survey Tuesday showed Trump’s approval rating at 49%, a record high for his presidency.

He may give a separate speech after the expected Senate acquittal vote on Wednesday, according to an administration official.