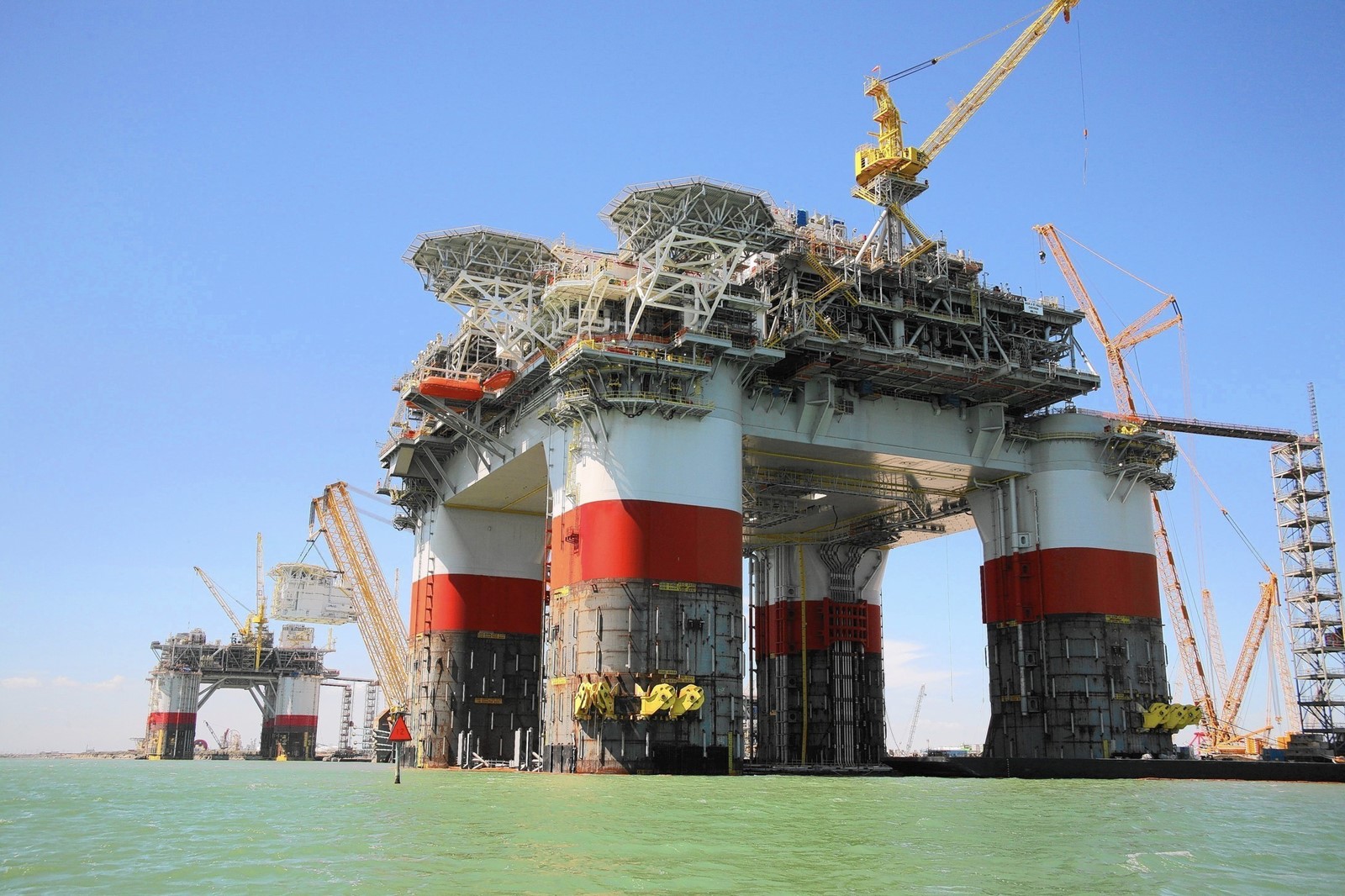 ASSET MANAGERS and institutional investors have slowly awoken to the risks of global warming, and the pandemic has highlighted the costs of global disruptions. Above, Chevron platforms in the Gulf of Mexico. ( Chevron Corp. )
PREVIOUS IMAGE

As 2020 kicked off, Dan Gocher at the Australasian Center for Corporate Responsibility, a shareholder advocacy organization, was feeling “pretty optimistic” about its plans to force big Australian energy companies to tackle climate change.

BlackRock, the $6.8-trillion asset manager, and other large investors had proclaimed an urgent need to arrest global warming. With the renewed focus on climate change following devastating bush fires in Australia, the ACCR was hopeful several climate-related resolutions filed at oil and gas producers Santos and Woodside would gain strong shareholder support at their annual meetings in April.

Then came the COVID-19 pandemic. “Once the virus hit, we said, ‘God, we won’t get anything done [on climate change] for 18 months,’ ” Gocher said.

Like many others, Gocher feared investors would swiftly retreat from recent climate pledges as markets plummeted. Critics had long argued that the fund industry’s nascent love affair with environmental, social and governance investing, or ESG, was in reality a marketing ploy that would be dumped at the first sign of trouble.

Instead, in spite of the pandemic, 2020 has proved to be a landmark year for investor action on climate change, with significant resolutions being passed and investment pouring into sustainable funds. With regulators and clients increasingly calling for change, asset managers are broadening their remit beyond energy-intensive industries such as oil.

Rather than drive investor attention away from climate change, the pandemic has cemented interest, with many investors fearing the economic fallout seen during the pandemic could be replicated if the world fails to halt global warming, said Mirza Baig, global head of governance at Aviva Investors.

Until the coronavirus outbreak, “there was still a significant portion of the investor base” that believed tackling climate change “could wait until tomorrow,” he said. “That has changed.”

At Santos, 43% of shareholders supported a resolution to require the energy company to set targets in line with the Paris agreement to tackle climate change — the first time a targets-based resolution had received such a high level of support in any country. More than half of shareholders voted in favor of a similar motion at Woodside a few weeks later. “We were very much surprised by the support,” Gocher said.

In the U.S., a resolution calling on Chevron to disclose its lobbying on global warming passed, while almost half of shareholders backed a climate proposal at JPMorgan, the U.S. bank.

The fact that only a few of these resolutions passed demonstrates that the arguments within the investment world are far from settled. But pressure on energy companies from the world’s most powerful investors is rapidly increasing. Ordinarily for resolutions of this type, 99% of shareholders vote according to management recommendations, according to Follow This, a green shareholders’ group that filed resolutions at European energy companies BP, Royal Dutch Shell and Equinor.

Overall, in the U.S. and Canada, average investor support for environmental resolutions during the first six months of 2020 was 32.7%, up from 21.9% in 2019, according to Proxy Insight, a data provider.

“We have had the most successful [annual general meeting] season ever [for climate resolutions], but because of COVID it didn’t get much attention,” said Mark van Baal of Follow This. “One by one, these investors see that climate change is such a threat to their assets.”

Since the Paris agreement was drafted in 2015, the $85-trillion asset management industry has slowly awoken to the growing risks of global warming. The publicity surrounding the campaigns of Greta Thunberg and Extinction Rebellion in 2019 forced even the most skeptical of big investors to pay attention, said Wolfgang Kuhn, director of financial sector strategies at ShareAction, a responsible investment charity.

European asset managers including Nordea, Legal and General Investment Management, BNP Paribas Asset Management, Aviva Investors and Robeco have been at the forefront of this movement.

Investment companies from the U.S. to Australia have been slower to react. A study by ShareAction found that 38 of the world’s 75 largest asset managers scored badly on ESG issues, including BlackRock, Vanguard and State Street. The three firms are hugely influential and control about a quarter of U.S. markets alone through the popularity of their passive funds and other investment products, meaning their views drive change in the corporate boardroom.

After years of criticism over alleged inaction, BlackRock, the world’s biggest asset manager, in January revealed plans to put climate change at the center of its investment process by rolling out new ESG funds, divesting some coal holdings and taking a tough line on global warming during boardroom discussions with businesses around the world. At the time, BlackRock Chief Executive Larry Fink warned that global warming represented a risk to markets unlike any previous crisis.

For others, their new foray into climate issues has been driven by demand from clients, including younger investors who want their investments to do good as well as generate a return. Even as investors retreated from mainstream funds during the pandemic, ESG products continued to attract cash. Sustainable funds in Europe pulled in nearly $35 billion in the first quarter of 2020, compared with outflows of $172 billion across all European-based funds, according to Morningstar, the data provider.

ESG fund performance has been strong. Research from BlackRock in May found that sustainable strategies have outperformed during this year’s period of intense volatility, with 94% of leading sustainable indices beating their parent benchmarks in the first quarter.

“There has been a big shift in the past five years: The understanding, the awareness of climate change has grown enormously, particularly in the last year,” said Eugenia Unanyants-Jackson, ESG research head at Allianz Global Investors.

For years, small religious organizations or advocacy groups spearheaded climate change agitation at companies. These lonely crusades, though supported by a handful of other mainstream investors, failed to rattle most boardrooms.

“A lot of faith-based investors have been raising these issues for years and years,” said Kate Monahan at Friends Fiduciary, a nonprofit investment firm for 400 Quaker communities with more than $500 million in assets under management in Philadelphia.

Still, there is a divide in how big asset managers vote. BlackRock and Vanguard supported no environmental resolutions in the U.S. in 2015, but those figures rose to 13.8% and 16.7% respectively in 2019, according to Proxy Insight. BNP Paribas Asset Management and Allianz Global Investors, in contrast, backed at least 90% of environmental resolutions in the U.S. last year.

BlackRock was criticized for failing to support the climate resolutions at Woodside and Santos. But it supported other environmental proposals this year, including the lobbying motion at Chevron. It has also begun voting against the reelection of board directors over climate concerns, taking this approach at 50 companies globally this year.

“Because we believe climate risk is investment risk, we are most focused on companies that face material financial risks in the transition to a low-carbon economy and, as a result, present the greatest risks to our clients’ investments,” said Amra Balic, head of BlackRock investment stewardship for Europe, the Middle East and Africa.

With public pledges and increased staff, companies now face the prospect of intense shareholder scrutiny. Small shareholders such as Monahan at Friends Fiduciary were easy to ignore, but large asset managers cannot be easily brushed aside.

It marks a big shift for companies, many of which have lobbied heavily for a relaxation of tough climate rules and a reduction in shareholder power.

In response, some European oil companies such as BP and Shell have outlined so-called net zero ambitions in response to investor pressure. But in many cases, this has not been enough to appease all investors — resolutions calling for European oil companies to set hard targets on climate change received more support this year than last, despite the companies’ pledges.

It is not just carbon-intensive companies such as oil, petrochemicals and mining that are feeling the pressure. Barclays, the U.K. bank, was forced to unveil a new climate plan this year after shareholders targeted it. JPMorgan said in May that board member Lee Raymond, a former chief executive of ExxonMobil, would step down after intense pressure from activists and shareholders.

“It was part of every conversation in Davos. I’m talking about climate, in particular,” JPMorgan CEO Jamie Dimon said at his bank’s investor day in February. “We’re taking it very seriously.”

In the U.S. there is growing pushback against investors acting as climate warriors. Asset managers are gearing up for a fight with the Trump administration over a new proposal that threatens investors’ ability to incorporate ESG principles into pension portfolios. At the same time, many well-known asset managers are still reluctant to vote against management, meaning the vast majority of climate resolutions do not pass.

Tom Quaadman at the U.S. Chamber of Commerce said that although there has been more support for environmental shareholder proposals this year, behind-the-scenes conversations between companies and investors tend to resolve climate change concerns before a proxy vote, convincing worried investors not to vote against management.

Gocher, of the Australasian Center for Corporate Responsibility, said it remains to be seen whether companies will listen to shareholders.

“Getting these votes doesn’t mean companies will change,” he said. “Really the test comes in the next 12 to 18 months to see if investors demand the things they voted for.” That will be the test of whether companies “heed that warning investors have given them.”