The L.A. River’s spigot could turn off

Cities want to recycle 100% of their treated wastewater, a move environmentalists say would doom the habitat 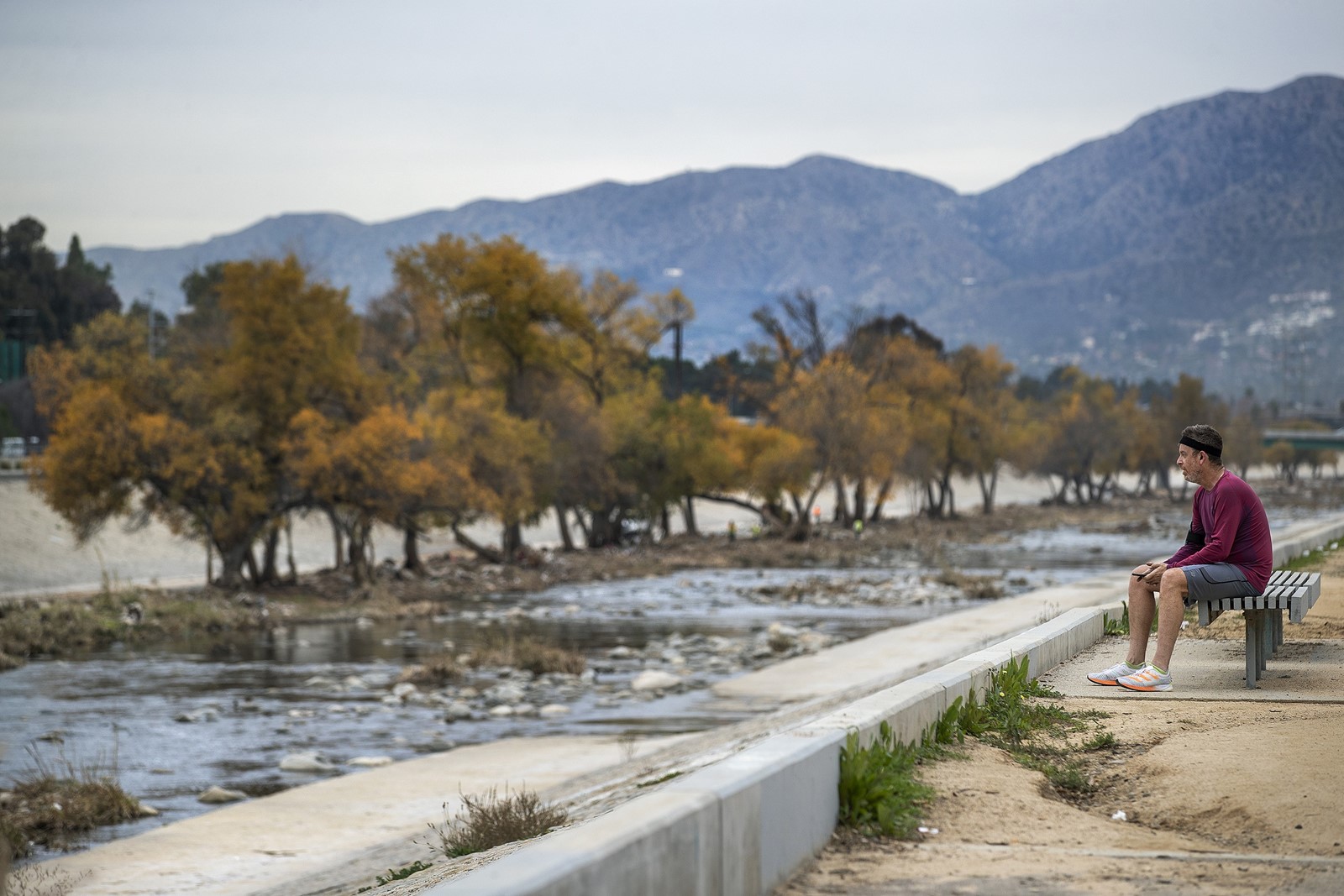 A MAN sits beside the Los Angeles River last month. Except on rainy days, about 90% of the water flowing down the river comes from sewage treatment plants. (Mel Melcon Los Angeles Times)
PREVIOUS IMAGE

Just north of downtown — and a stone’s throw from the growling 5 Freeway — the concrete bed of the Los Angeles River gives way to soft earth and an explosion of riparian life: Cottonwood and sycamore trees push skyward, while fish dart beneath the swooping shadows of cackling waterfowl. The scents of mulefat scrub and sage hang in the air.

For many, it’s a vision of what the Los Angeles River looked like before it was transformed into a massive flood control channel. It also serves as a rallying point for those environmentalists who want to see the river returned to a more natural state.

But what few Angelenos realize is that for much of the year, this thriving river habitat is sustained by a constant flow of treated wastewater.

Although melting snowpack and torrential rains send water coursing along the river from time to time, most of the water originated from the sinks, dishwashers, bathtubs, toilets and washing machines of millions of homes and businesses before it was treated in sewage plants and released into the river.

“What a waste of precious water,” Michael De Ghetto, chief assistant general manager of Glendale Water and Power, said recently as he gazed upon an area where more than 35 million gallons of runoff from Glendale, Burbank and Los Angeles are dumped each day.

Except for stormy days, about 90% of the unnaturally warm water flowing down the river comes from treatment plants, while the other 10% is urban runoff captured by a network of 2,000 storm drains.

Reusing those discharges, city officials say, will help California meet its goals of recycling 2 million acre-feet of wastewater per year by 2030. It would also allow local municipalities to reduce their reliance on water imported from Northern California and the Colorado River.

Critics, however, warn that this will lead to a grim domino effect: remnant cottonwoods, willows, oaks and sycamores will dry out, the ecology will unravel and popular riverside activities including hiking, bicycling, fishing and kayaking will disappear in some of the most densely populated, park-poor areas in the United States.

“The driving concept over the past two decades has been that we can’t have a more or less normal L.A. River without water in it,” said Joseph T. Edmiston, executive director of the Santa Monica Mountains Conservancy. “But that won’t be possible if city proposals to reclaim their wastewater to the nth degree are implemented.”

The tensions have been playing out in public hearings and behind closed doors as the State Water Resources Control Board struggles to develop guidelines and computer models that can be used to evaluate the potential effects on wildlife and the quality of life for the 10 million people living in Los Angeles County.

State hydrologists have asked for “cooperation and open and cordial discussions.” But that hasn’t been easy as city agencies, conservation groups, community activists, tribes, regulators and others argue over proposed flow scenarios ranging from existing inputs to zero.

“Of course, Glendale, Burbank and Los Angeles want to reclaim all their runoff — but that doesn’t mean they’ll get it,” said Jon Bishop, chief deputy director of the state water board. “They’ll file petitions to recycle more and more of their water, then, after public hearings, our staff will make final recommendations on what minimal flows should be left in the river.”

Decision-making criteria for evaluating minimum base flows were developed under a recent Los Angeles River Flows Project study initiated by the state water board in collaboration with the city of Los Angeles and the Los Angeles County Department of Public Works.

But critics argue that its proposed water management strategies favor municipal recycling efforts at a time when severe drought has made long-term reliable water supplies increasingly uncertain in Southern California.

“Ironically, the L.A. River has more water in it than it ever had historically at a time when water agencies are desperately scraping for more local supplies,” said Tim Brick, managing director of the nonprofit Arroyo Seco Foundation. “So, the big question now is this: Do we use that wastewater to try and restore the natural hydrology or let the city water agencies take it all?”

Burbank already has its mind made up. The city, which relies solely on imported water supplies provided by the Metropolitan Water District of Southern California, produced 7,091 acre-feet of recycled water last year, of which about 3,020 acre-feet were used for landscape irrigation. The remainder was discharged into the river. (On average, one acre-foot of water can supply three households for a year.)

Now, the city said, it is “exploring options to use more of its recycled water” to increase “reliable, sustainable and high-quality potable supplies to Burbank residents and businesses.”

They include, the city said, construction of a “potable reuse project” that “could become essential and economically viable if imported water supplies to the region were to be interrupted or curtailed.”

The battle over water recycling and its ecological and social impacts is not unique to the L.A. River. Efforts to recycle more wastewater are already taking a toll on aquatic ecosystems and parklands elsewhere in the county.

The plan was intended to enhance climate resiliency by cutting down trees that were 70 years old and more than 100 feet tall to make room for groundwater recharge ponds and a pump station.

Along the L.A. River, community leaders and environmentalists say measures to boost production of recycled water and captured storm water must be weighed against myriad ambitions.

They include laying the groundwork for investment in projects designed to address what the county’s Los Angeles River Master Plan describes as “the disparity within our communities” and to improve “the quality of life and ecosystem health for current and future generations of Angelenos.”

Desiccation of the channel could also affect plans to use stretches of the river just north and south of downtown as starting points for a 21st century urban renaissance of recreational, commercial and environmental improvements.

They include the Taylor Yard project, which sits on more than 100 acres of riverside property that Los Angeles bought for $60 million; a $1.3-billion river restoration proposal approved by the U.S. Army Corps of Engineers; dozens of proposed bike paths, trails and parks from Chatsworth to Long Beach; and a proposal to recover populations of 3-foot-long steelhead salmon, last seen near the Glendale Bridge in 1938.

The treated water emerging from those facilities creates pools and swirling eddies that are home to thriving populations of nonnative Amazon sailfin catfish, African clawed frogs, carp and bullfrogs. Native species clinging to survival in some sections of the river include chorus frogs; western toads; arroyo chubs, a California species of special concern; and least Bell’s vireos, a federally endangered songbird.

In the decades since engineers first entombed the river with concrete, working-class communities along its banks have been plagued by environmental affronts, including insensitive land use and pollution from freeways, rail yards and industrial sites laden with toxic substances.

Awareness of the river as a natural resource began to grow in the 1980s when environmental groups put pressure on the county and the Army Corps of Engineers. The waterway is slowly being transformed into a greenbelt of parks, trees and bike paths because of a statewide recreational bond measure approved by voters.

It was formally christened a navigable waterway in 2010, subject in its entirety, from Chatsworth to Long Beach, to the protections of the federal Clean Water Act.

During the severe five-year drought that ended in 2017, cities along the river corridor were strongly urged by the Los Angeles Department of Water and Power, which holds water rights to all the flows in the river, and some environmental groups to do a better job of recycling their wastewater and recharging aquifers with storm water.

“Historically, tension has seethed in any attempt to make the Los Angeles River an appealing amenity,” said Jon Christensen, an environmental historian at UCLA, “because it involves precious water.”

“Today, there is tension between the goals of cleaning up and storing urban runoff and captured storm water otherwise flushed out to sea,” he said, “and managing that wastewater instead to revitalize the river corridor communities and wildlife habitats.”

“Underneath all that tension,” he added, “is an opportunity to reconcile those differences in a variety of beneficial uses.”

The complexity of the challenges was in full view along a section of the river north of downtown where wastewater and runoff were gushing from municipal storm drains after a heavy dose of rain.

The chattering of migrating waterfowl and shore birds was drowned out by the din of freeway traffic echoing off the channel’s concrete walls. Cyclists raced along the L.A. River Path as a cleanup crew clad in bright yellow vests was filling dump trucks with garbage strewn by flood waters along the banks below. Millions of gallons of foamy treated wastewater and runoff churned through pools and slick chutes that are breeding grounds for invasive species.

Looking down on the consequences of progress and population on the hydraulic heart of the county, De Ghetto frowned and said, “Honestly, is it fair to import water from the Feather River and Owens Valley just to dump it into a flood control channel?”

“We currently recycle about 3,500 acre-feet of wastewater out of the total 6,500-acre-feet we generate each year,” he said. “Now, we want to recycle all the rest. ... This issue is far from over.”