Trump’s grip on GOP is slipping 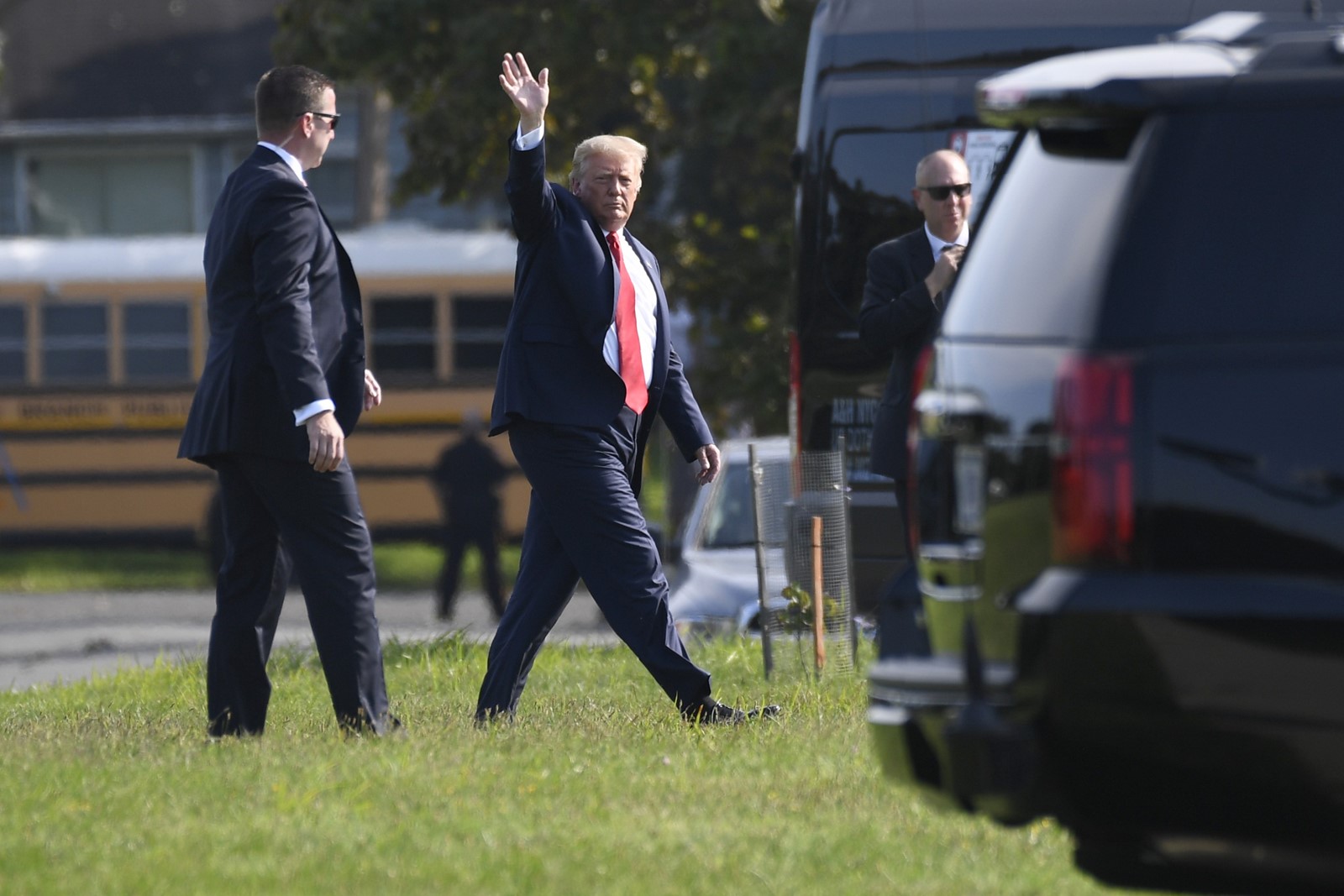 PRESIDENT TRUMP heads to his vehicle Sunday in Long Branch, N.J., after stepping off Marine One on his way to a fundraiser. Even as he campaigns, some GOP lawmakers are breaking out of lockstep with Trump. (Susan Walsh Associated Press)
PREVIOUS IMAGE

Less than three months before election day, evidence is mounting that President Trump is losing political influence in Washington and facing the early onset of “lame duck” status as Republican leaders in Congress increasingly appear willing to defy or rebuff him.

In recent days, GOP lawmakers who once saluted — or at least didn’t publicly oppose — Trump initiatives have thrown cold water on some of his ideas and proposals, rejecting his suggestion to delay the Nov. 3 election, repudiating his unsubstantiated claims that mail-in voting leads to mass fraud, eliminating funds for a new FBI headquarters across from his hotel, and snubbing his calls for a payroll tax cut.

Although the nation is in a deep economic slump, with more than 31 million Americans receiving jobless benefits, Trump showed little interest in twisting arms in Congress to negotiate another coronavirus financial relief package that would extend full unemployment benefits, eviction protections and help school districts struggling during the pandemic.

Instead, Trump responded by signing four executive orders Saturday, making a show of unilaterally delivering limited and somewhat symbolic relief after failing in the art of another major legislative deal.

Trump is “not really a player in these negotiations,” said Alex Conant, a Republican strategist. “He does not have much political capital to spend on [Capitol Hill].”

Trump’s disengagement from the nitty-gritty of governing is not new. Nor is his penchant for contradicting his own administration on matters large and small.

But after nearly four years of daily presidential mistruths, polls show a strong majority of Americans don’t trust what Trump says about the pandemic, or his bizarre claims of success in fighting it — a distinct liability as he faces reelection with more than 162,000 Americans dead from COVID-19 and a 10.2% unemployment rate.

Now as he enters the twilight of his first term with dimming prospects for a second, the president is finding that Republicans are notably less willing to indulge his inclinations, ideas and persistent magical thinking amid a seemingly never-ending national crisis.

“He has lost a great deal of his personal power,” said David Gergen, a counselor to four presidents. “He still has his constitutional powers, and, if anything, he’s pushing more against the limits of those. But he’s lost the ability to rally people behind him and there’s no one thing he can do as president to turn this around.

“Most Republicans know that,” Gergen said. “So increasingly, it becomes every man or woman for themselves.”

In an effort to regain the initiative, Trump on Saturday signed four executive orders to circumvent the congressional impasse and try to impose a payroll tax cut, protect people from evictions, and extend federal unemployment benefits at a level of $400 a week, less than the recently expired $600 weekly benefit Congress approved as part of its coronavirus relief package earlier this year.

During an event at his private Bedminster, N.J., club where members, clad in golf attire, watched from the back of the ballroom, Trump said he had to act because Democrats were “holding this vital relief hostage.” He explained his opposition to the additional $2 trillion Democrats had sought in funding for local police departments and school districts, calling that “bailout money for states run by Democrat governors.”

While Trump is intent on convincing the country that he is delivering the relief Congress has failed to authorize, his ability to actually do so may face legal challenges.

The Constitution gives Congress — not the president — the power of the purse, so Trump’s executive orders could be more symbolic than substantive, a political tactic he has used often in the past.

Asked about the legality of his moves, Trump responded by focusing on the politics alone.

“If we get sued, it’s going to be someone who doesn’t want people to get money,” Trump said. “That’s not going to be a very popular thing.”

In caustic tweets and comments, Trump has mostly blamed Democrats for the logjam, although Republican senators are divided about whether more federal aid is necessary.

One person familiar with the White House’s thinking on the matter suggested that Trump is trying to pressure Democrats to make concessions in negotiations with White House Chief of Staff Mark Meadows and Treasury Secretary Steven T. Mnuchin.

But the president’s zigzagging on legislative matters, his constant catcalls from the sidelines and his diminished political standing have left him with a weaker hand to play.

“When you’ve got administration officials on the hill trying to negotiate the next round of COVID relief and he’s on the golf course tweeting about a payroll tax cut — completely disengaged and not remotely connected to the conversations his own people are having with congressional leaders — that’s a bystander in chief,” said Michael Steel, a former top aide to John A. Boehner, the Ohio Republican who served as House speaker from 2011 to 2015.

But his shortcomings have become magnified in the crucible of a deadly pandemic.

“Traditionally a president would come out and at least propose some kind of framework that Congress would use as guidelines to draft legislation,” she added.

With early voting in nearly 30 states set to begin in less than a month and polls showing Trump trailing Joe Biden, the presumptive Democratic nominee, Republicans are increasingly focused on preserving the party’s Senate majority, which could serve as a bulwark against a potential Democratic administration.

In recent weeks, Senate Majority Leader Mitch McConnell has told vulnerable Republicans that they may have to distance themselves from Trump to survive tough reelection fights, according to two people familiar with the conversations.

“Everyone knows how this works and how important [keeping] the Senate is,” one of the people said, speaking on condition of anonymity to discuss private conversations. “And most presidents, if they become a liability, would say, ‘Do what you’ve got to do.’ The question with Trump is does he understand or does he get upset over being criticized publicly?”

But even Senate Majority Whip John Thune (R-S.D.), who is not up for reelection until 2022, was among those who publicly questioned whether Trump could legally accept the Republican presidential nomination from the White House after Trump suggested he might do so.

Thune also has pushed back against Trump’s false claims that mail-in voting leads to widespread fraud, urged the president to adopt a “different tone” in June when Black Lives Matter protests roiled the nation, and joined McConnell and House Minority Leader Kevin McCarthy (R-Bakersfield) last month in rebuking Trump for suggesting delaying the presidential election for the first time in history.

“Congressional Republicans have kind of worked this out,” said Steel, the former Boehner aide. “You can diverge from him on policy as long as you don’t go on Fox News and talk about it publicly.”