What Biden means for American Catholics

Church leaders warn against his policies, but laypeople tend to relate to his views. 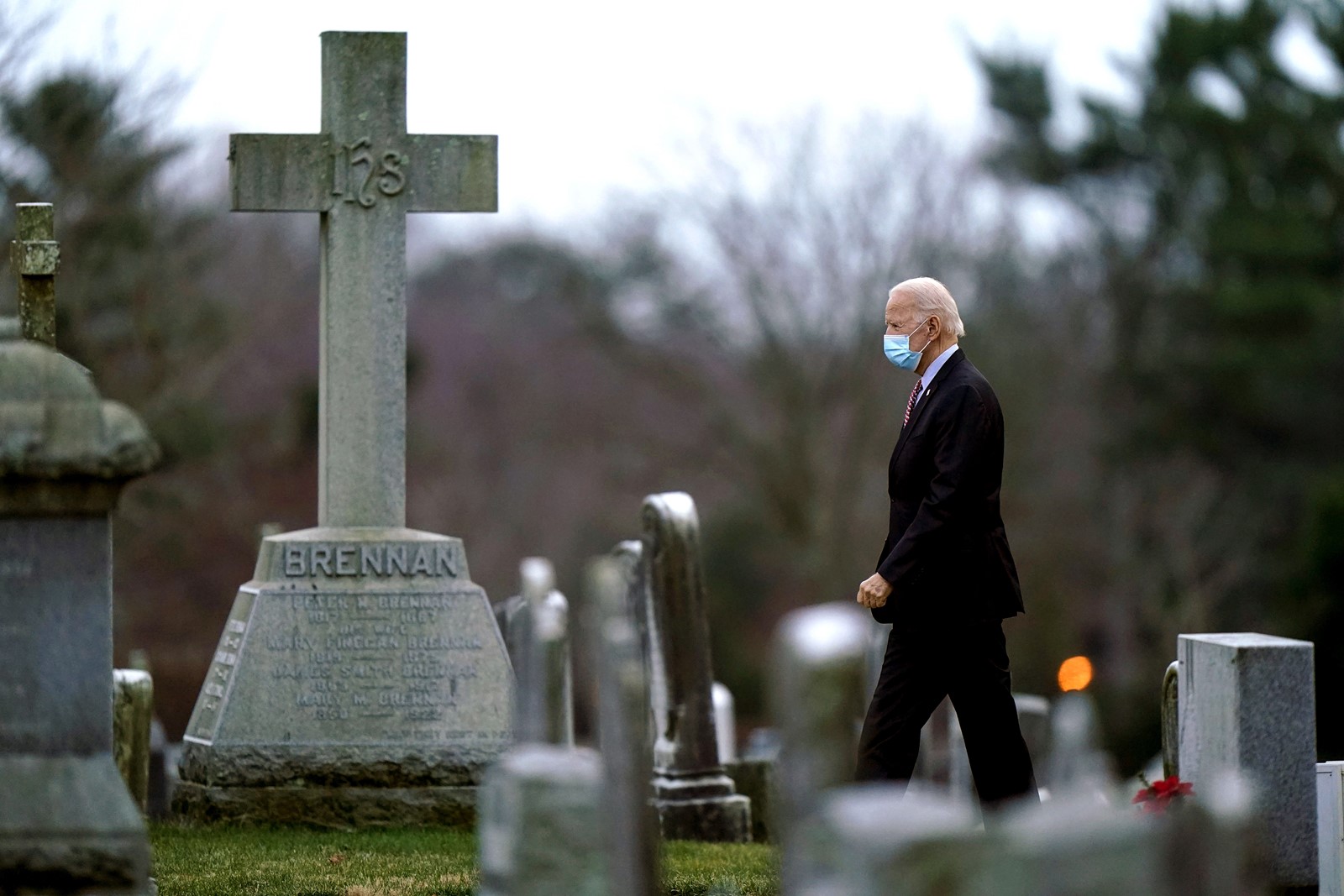 Watching the first weeks of Joe Biden’s presidency unfold on TV from her Bronx apartment, Natalia Imperatori-Lee saw a bit of herself in America’s new leader.

Like her, Biden was a regular at Sunday Mass. In clips, she glimpsed the rosary peeking out from his sleeve — a reminder of the prayer beads from her youth in a Cuban American home. In his push to offer legal residency to millions of immigrants, she sensed the church’s teaching to “welcome the stranger among us.”

“I’m just proud to see a Catholic up there in the White House,” said Imperatori-Lee, a 44-year-old professor of ecclesiology at Manhattan College. “I don’t feel like he’s in your face about it, but .... it’s like this quiet, motivating constant.”

After a nominally Christian president surrounded by conservative evangelicals, Biden brings a starkly different approach to religion. Only the second Roman Catholic in the nation’s highest office — John F. Kennedy was first — Biden has a liberal faith that closely aligns with that of many members of the country’s largest denomination who lean less rigid than their bishops and cardinals on matters of family and sexuality.

Biden’s support of same-sex marriage and abortion rights has spurred debate for running counter to church positions. Such is the American Catholic landscape, where Biden, like many, balances rituals and traditions with mainstream Democratic ideals.

“He seems to me like a Pope Francis kind of Catholic,” said Imperatori-Lee. “A pious guy who people can identify with even if they are lapsed or cultural Catholics; someone who doesn’t engage in these ‘culture war’ issues but tries to build bridges.”

Biden, 78, has spoken candidly about his faith over the years, describing it as his “safe place” and prayer as a personal source of hope. In his memoir “Promises to Keep,” he wrote that growing up around priests and nuns gave him a sense of the “sort of man [he] wanted to become.”

After the police killing of George Floyd last May, Biden sent Floyd’s family a videotaped eulogy. “I grew up with Catholic social doctrine, which taught me that faith without works is dead, and ‘you will know us by what we do,’ ” he said, adding that Americans had to “ensure that all men and women are not only created equal, but are treated equally.”

In his short time in office, Biden has attended Mass at St. Joseph on the Brandywine Church in Greenville, Del., and Holy Trinity Catholic Church in Washington, where he also prayed as vice president. A Jesuit priest offered the invocation at the inauguration, where Biden quoted St. Augustine. Behind his White House desk is a photo of him meeting Pope Francis.

President Trump, who was baptized Presbyterian and has identified as a nondenominational Christian, was mocked at times for seeming unfamiliar with common Christian terms, and some of his faith-themed photo-ops appeared tone-deaf to many Americans.

Evangelical supporters praised Trump for moving the U.S. Embassy in Israel to Jerusalem and for a rule that kept foreign aid from groups that provide or “actively promote” abortion. The Biden White House has said the embassy will stay put, but he has already signed an order undoing the abortion policy.

While Biden has faced less criticism than Trump for his knowledge of the Bible, church leaders representing some 72 million U.S. Catholics have questioned how he applies it.

Last month, the U.S. Conference of Catholic Bishops released a letter saying Biden’s “piety and personal story” were “hopeful and inspiring,” and praising his “longstanding commitment to the Gospel’s priority for the poor.” But the bishops, led by Los Angeles Archbishop José H. Gomez, also said his policies would “advance moral evils and threaten human life and dignity, most seriously in the areas of abortion, contraception, marriage, and gender.”

The conference now has a subgroup looking into the “difficult and complex situation” of a Catholic president not fully in line with church positions. One potential question is on the Eucharist: In one incident on the campaign trail in 2019, a Florence, S.C., priest refused to let Biden receive Communion because of his views on abortion.

For Msgr. Michael Carruthers, a priest in Riverview, Fla., just having a Catholic president was notable.

“I wasn’t alive before JFK died, so this is a first for me,” said Carruthers, 57, who leads Resurrection Catholic Church outside Tampa. “To have a faith-filled president is exciting, especially one that shares that idea of dialogue that is part of the Catholic tradition.”

Abortion and same-sex marriage were “important to note as differences between Biden’s views and church teaching,” Carruthers said, but “his sense of social justice with immigration and care of the poor — that’s very in line with church teaching.”

“A lot of my parishioners think of him as Catholic in name only. The issue of abortion is very important to them,” said Spexarth, who leads St. Catherine of Siena Catholic Church. “I believe he’s a Catholic of strong faith. But that doesn’t mean he’s in communion with the church.”

Spexarth, 63, said Biden’s presidency could be good for the church because “it’s going to create a conversation about what it means to be a Catholic in good standing.”

While it was once largely a given for Catholics to be Democrats, today they are nearly evenly divided between the two major parties, according Pew Research Center surveys. Catholic Democrats are much more likely than their Republican counterparts to support the right to abortion and same-sex marriage.

When Kennedy ran for president in 1960, the Irish American Catholic was much like a majority of the church’s U.S. faithful, being descended from white Europeans.

He wasn’t known as particularly religious, yet his Catholicism caused a stir. Protestants openly questioned whether he would take orders from the pope, an issue he addressed in a 1960 speech to the Greater Houston Ministerial Assn.

Biden’s ancestors also immigrated to the U.S. from Ireland, as well as England and France. He was born in Scranton, Pa., which Irish Catholic industrial workers helped establish, and raised in and around Wilmington, Del., which also has deep Irish Catholic roots.

“Today it’s just a little more than half of Catholics who are white,” while 40% are Latino, said Kathleen Holscher, an associate professor of religious studies at the University of New Mexico and past president of the American Catholic Historical Assn.

“Biden represents a much different, older, whiter generation of Catholic culture in the country,” she said.

Felix Lopez, a 36-year-old roofer raised in El Salvador, prays daily at the Latino parish of Our Lady of Guadalupe in Sioux Falls, S.D. In Biden, he sees a man who “can speak about the power of Jesus,” but said he feels the president falls short on abortion, an issue Lopez considers key.

Wife Rosa Lopez, a Salvadoran American from California who attends Mass once a week at most, described Biden as “really religious and Catholic, something that makes you feel good to see as someone leading the country.”

The daughter of immigrants said Biden has “really great ideas about immigration reform,” a view she sees at the core of the church’s mission. But she wondered how much Biden’s faith would translate into policies.

“Religion is one thing, and it’s important,” she said, “but that’s only one part of being a leader of the country.”