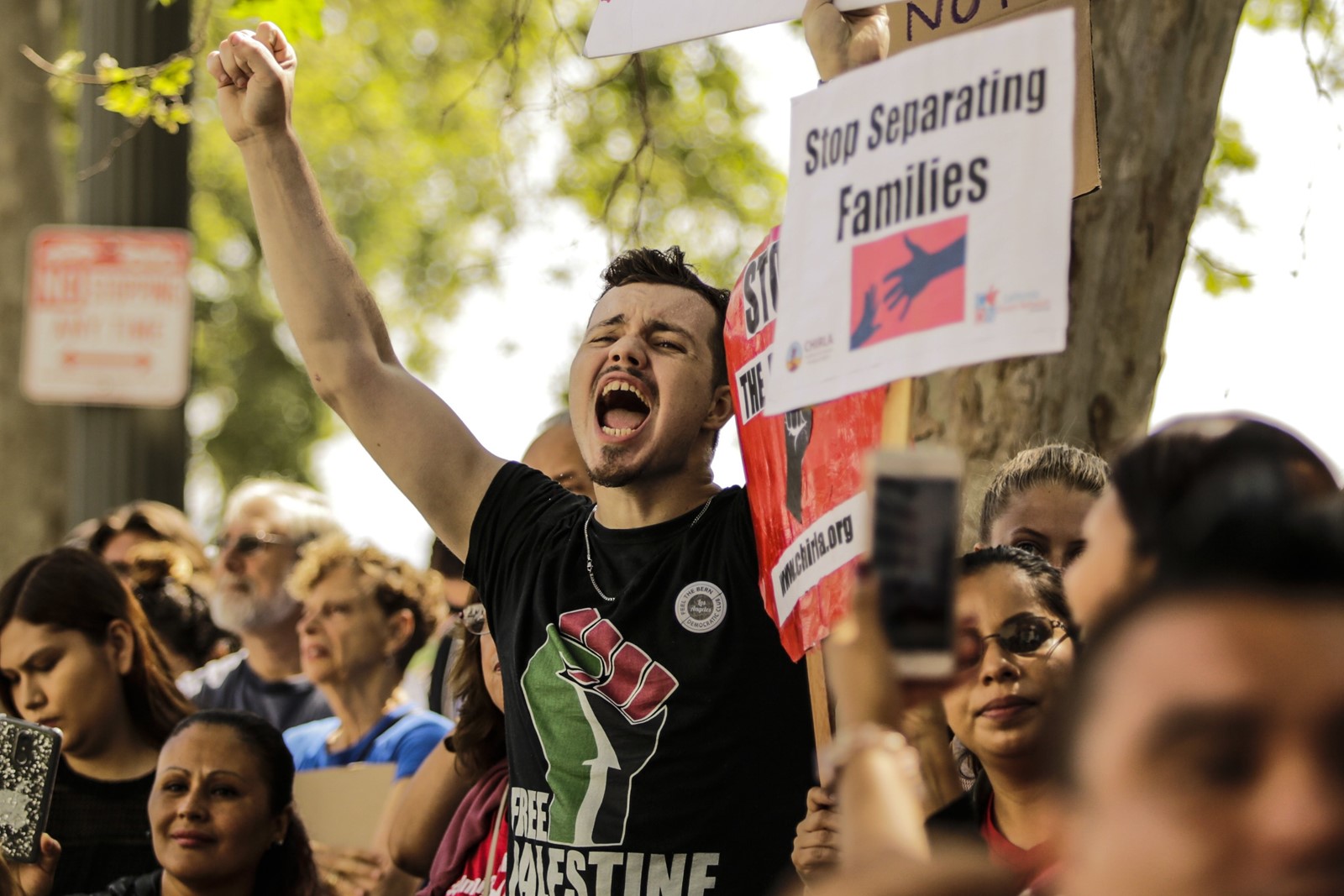 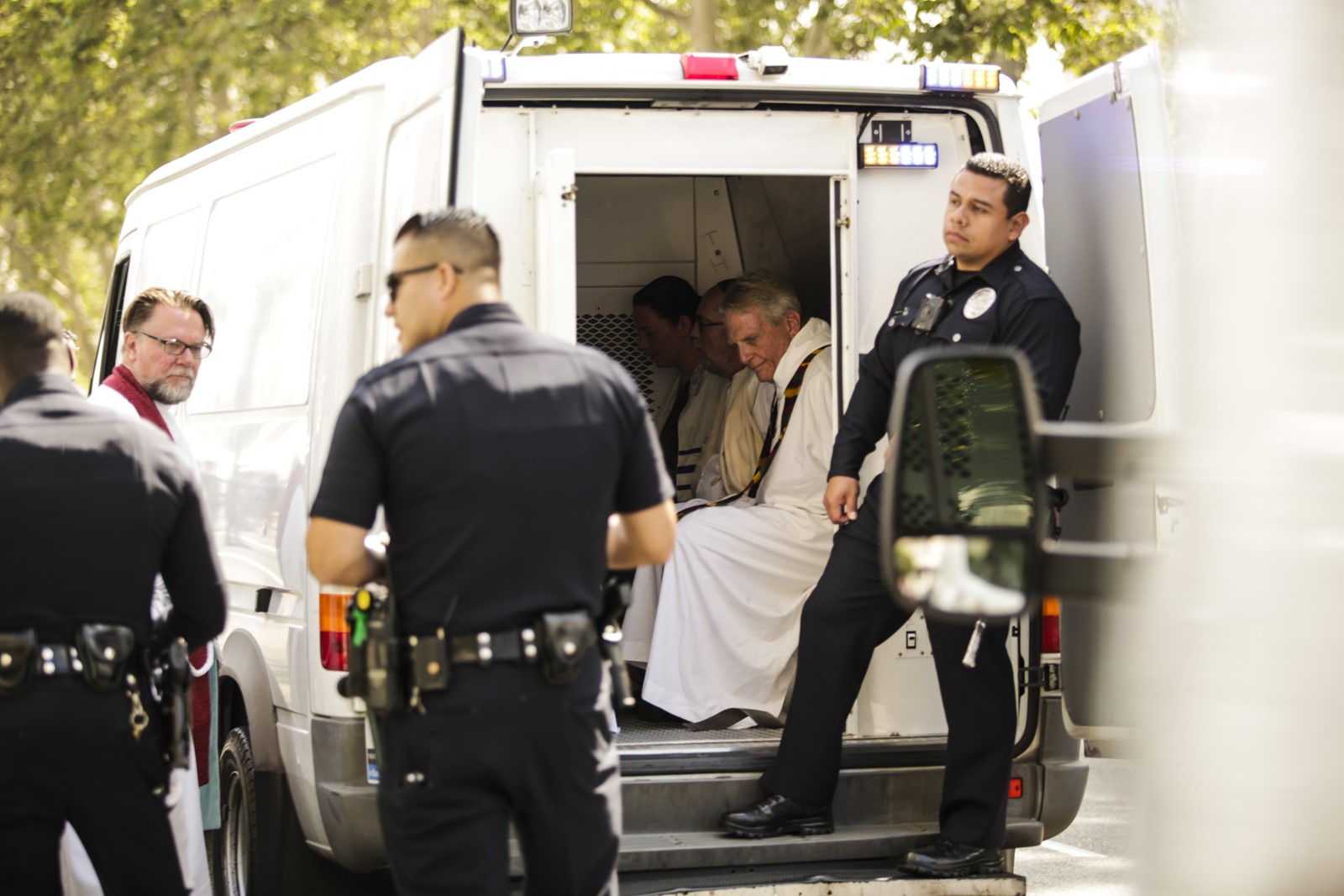 ABOUT 150 demonstrators blocked traffic Tuesday on Spring Street as they prayed. About two dozen people, many of them clergy members, were arrested. ()
PREVIOUS IMAGE

Atty. Gen. Jeff Sessions on Tuesday dismissed critics of the Trump administration’s immigration policies as open-borders advocates during a speech in downtown Los Angeles that drew hundreds of protesters.

“The rhetoric we hear from the other side on the issue, as on many others, has become radicalized,” Sessions said during a speech to a criminal justice organization. “We hear views on television today that are on the lunatic fringe, frankly.”

He was greeted warmly by the crowd in the Millennium Biltmore Hotel, where he spoke. A man introducing Sessions to the audience assured him that he was “among friends today.”

Outside, it was a different story.

Dozens of demonstrators coalesced outside the hotel, while Los Angeles police officers and uniformed security guards stood at every entrance.

“The Biltmore is hosting Jeff Session [sic] A Kidnapper,” read a sign held by Steven Martin, 28, near the hotel’s entrance on Olive Street.

“I have to stand in solidarity with immigrants,” Martin said. He joined other demonstrators in chanting, “Asylum, not prison!”

The protesters targeted Sessions because of the administration’s “zero tolerance” border enforcement policy that has led to thousands of immigrant children and parents in recent weeks being detained and separated indefinitely.

Earlier Tuesday morning, about 150 demonstrators — a mix of interfaith religious leaders and immigrant advocates — gathered outside a downtown federal courthouse, where they held hands and blocked traffic on Spring Street as they prayed.

About two dozen people, many of them members of the clergy wearing religious robes, were arrested.

“Kids belong at home! Not in cages!” they chanted.

Sandra Olewine, a 51-year-old pastor at First United Methodist Church in Pasadena, was the first person taken into custody. She had been seated in a line of people blocking the roadway. As she was led away in handcuffs, people cheered.

“Sometimes you have to break the law,” Olewine said minutes earlier. “We are sitting down for the children.”

“We are building a just and sacred society,” Klein said. “My faith says I have no choice but to be here.”

Linda Perez, a 68-year-old former secretary for the Los Angeles Unified School District who wore a pin that read “Impeach Trump,” said she was compelled to protest because she sees herself in the parents and children affected by the administration’s border policies.

“That man is evil,” she said of Sessions. “He’s separating kids from families.”

“It could have been me,” added Perez, who emigrated from Mexico in 1994.

Los Angeles Police Sgt. Barry Montgomery said he was happy that the demonstration ended peacefully and that people were able to uphold their constitutional right to protest. But arresting faith leaders wasn’t easy for him, he said.

“I hated it,” Montgomery said. “But the roads were blocked, and we had to disperse them.”

Many of the Spring Street protesters regrouped outside the Millennium Biltmore, where the crowd grew throughout the morning. One woman held a sign reading “2000 Kids Still Separated.” Another read, “Give me your tired. Your poor. Your huddled masses yearning to breathe free.”

Jake Gideon, 42, of Pasadena said he was outraged by the separation of children from their families.

“They have been telling us who they are for years. Their racism wasn’t, like, a huge surprise for me,” he said. “But for them to do this to children is disgusting.”

Cheryl Jackson of Plano, Texas, knew nothing about the protest beforehand and was heading to an event to feed the homeless but made a U-turn in her car once she saw the crowd. She borrowed a microphone and condemned Sessions’ previous use of a Bible verse in defending the policy.

In the hotel, Sessions received a friendly welcome from the Criminal Justice Legal Foundation, a conservative advocacy group that filed an amicus brief in support of the Trump administration’s lawsuit against California over its laws protecting immigrants in the country illegally.

In his half-hour speech, Session said critics of the administration’s hard-line policies wanted to stop all deportations and to have open borders.

“From coast to coast, perhaps especially on this coast, there are politicians who declare that having any border at all is mean-spirited,” Sessions said.

Many critics, he said, are people who “live in gated communities” and “are featured at events where you have to have an ID to even come in and hear them speak.”

“They like a little security around themselves, and if you try to scale the fence, believe me, they’ll be even too happy to have you arrested and separated from your children,” Sessions quipped, grinning.

The crowd laughed loudly and applauded.

“They want borders in their lives, but not in yours.”

Lamenting that, in 2015, Justice Department officials in the Obama administration unsuccessfully tried to modify a court settlement known as the Flores agreement — under which the government agreed to hold immigrant minors no longer than 20 days — Sessions said the “word got out” that “if you crossed our border illegally, you would not be detained as long as you brought a child with you.”

“Our broken immigration laws are telling people they can, in fact, come here illegally,” Sessions said. “Why wait in line? Why file your claim and wait your turn?”