The women who helped put men on the moon 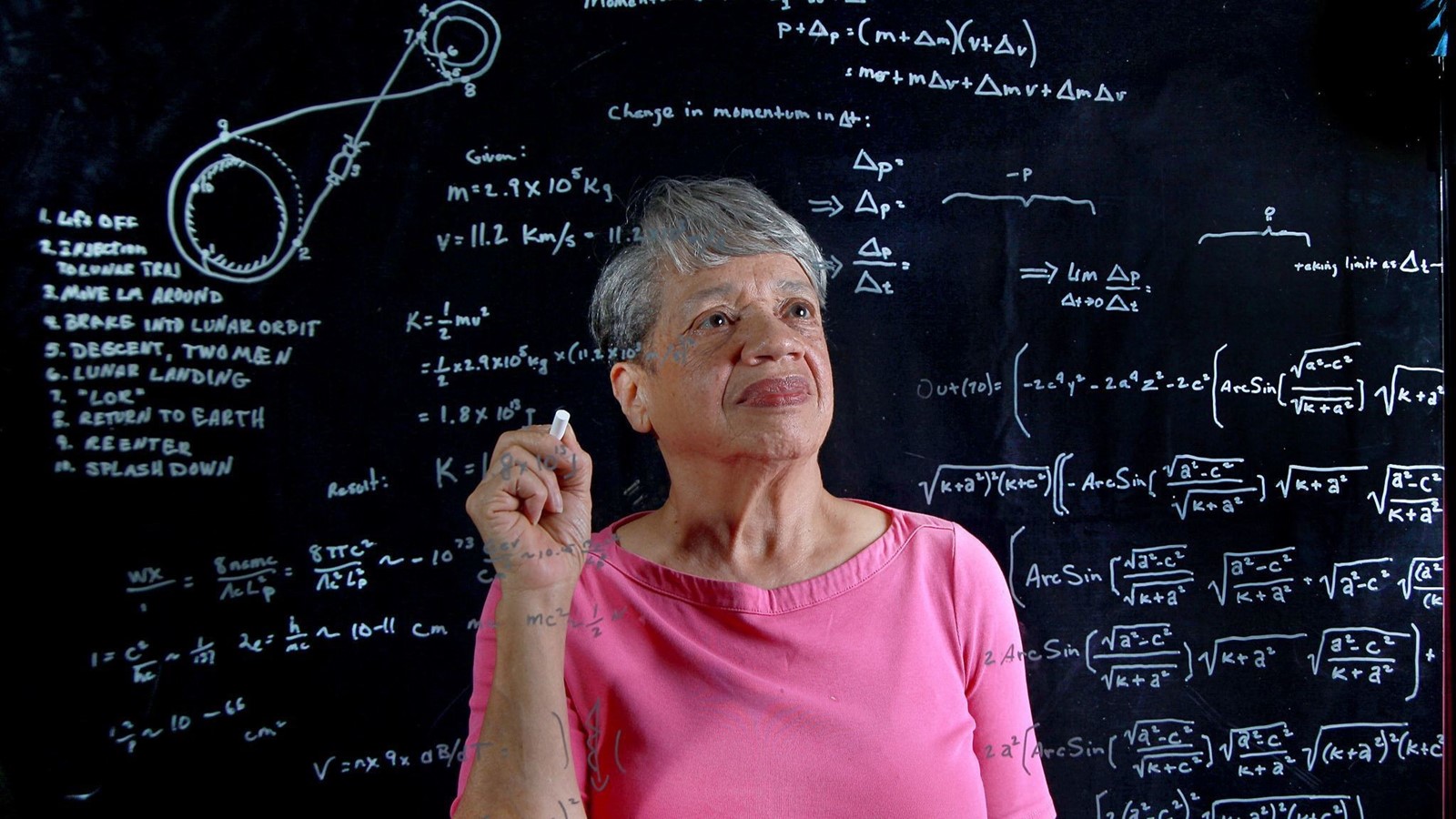 FIVE YEARS after Christine Darden joined NASA in 1967 as a “computress,” she asked her boss why only men were engineers. She was promoted. (Kirk McKoy Los Angeles Times)
PREVIOUS IMAGE

he Civil Rights Act had just passed and the slide rule was giving way to computers when Frances “Poppy” Northcutt arrived at NASA’s Houston campus in 1965, eager to join the space race. But her job title stunned her: “computress.”

Northcutt, then 22 and fresh out of the University of Texas at Austin with a mathematics degree, soon learned that at NASA, men were engineers, women “computresses” or “human computers,” with less status and less pay.

But Northcutt persevered, and three years later, during the Apollo 8 mission, she would become the first woman to work in Mission Control.

As the 50th anniversary of the first moon landing approaches, Northcutt and other women who helped America’s space efforts are reflecting on their often unheralded roles — and the indignities they endured. Many were lone pioneers, fighting behind the scenes to not only build their own careers, but to advance those of other women and minorities at NASA. When Northcutt started at the agency, she knew nothing of fellow computresses at NASA’s Langley, Va., research center — African American female mathematicians made famous in the book and 2016 film “Hidden Figures.” What Northcutt knew was that she wanted to be part of the team putting men on the moon.

“I wasn’t thinking of it in terms of breaking rules,” she said recently at her Houston office. “I was thinking you have to integrate into the team.”

When Northcutt entered Mission Control in 1968 with her long blond hair and miniskirts, she knew she would stand out. Almost everyone working there was white, male and clean-cut, a sea of white shirts.

“It was a radical thing for the guys to wear a blue shirt,” said Northcutt, 75, adding, “It was a pretty bleak landscape for women.”

She took a seat at a console, donned headphones and was instantly overwhelmed by the din of overlapping conversations.

“How am I going to make sense out of this cacophony of voices?” she thought.

She soon figured out how to focus on particular conversations, and picked up on some non-scientific chatter: “There’s a girl in here.”

“I knew I was being watched,” she said.

As the Apollo launch approached, video footage from Mission Control was broadcast around the world, including shots of Northcutt that prompted heaps of fan mail. But she also discovered that co-workers had trained a camera on her that they secretly watched on a private channel. “It would be called a hostile workplace” today, she said, but at the time, “we didn’t even have that language.”

“They were just barely processing claims of sex discrimination at that time,” she said. “And again, I’m trying to integrate into a team. I’m not trying to sue people. I think most women that experience things like that just go, ‘OK, I got to get past this.’”

She focused on her part of the mission: the return to Earth trajectory, the spacecraft’s path around the moon. As the astronauts rounded the backside, they would lose radio contact with Mission Control. Northcutt’s job was to plan for the worst, be prepared to abort the mission quickly and bring the men home safely.

So during the historic Apollo 11 mission in 1969, it wasn’t the lunar landing she recalls watching, but the orbit. And it wasn’t a TV she was watching closely, it was a clock.

“You know what time they’re supposed to come out and acquire signal,” she said. “If they’re early or late, it can be bad either way.”

They were right on time.

She would go on to successfully advocate not only for better pay, but also for improved benefits for women, including maternity leave and affirmative action. (When she started, labor laws dictated that Northcutt and other women were not paid for working overtime.)

“Being the first woman in Mission Control, I was being asked questions about the status of women at the time. I began to think more about that. I began to be more aware of the discrimination that was going on,” she said. Northcutt stayed on as a NASA contractor until 1973. By then, she recalled, “there were a lot of women in Mission Control. Just seeing women involved made a difference.” The following year, she served as the city of Houston’s first women’s advocate, promoting legislation and executive actions that allowed women to serve as police and firefighters.

Motivated by her work and the women’s rights movement, Northcutt became a lawyer.

She helped create a domestic violence unit at the local prosecutor’s office and said she now works on reproductive justice issues. She describes herself as a “onetime rocket scientist, sometime lawyer and a full-time women’s rights advocate.”

Last week, she visited Los Angeles in advance of the premier of the new IMAX film “Apollo 11: First Steps Edition,” which opened Monday at the California Science Center.

Christine Darden, one of the mathematicians portrayed in “Hidden Figures,” had been working as a computress at Langley for five years when she worked up the courage to ask her supervisor in 1972 why only men were allowed to be NASA engineers.

She had assumed the men had engineering degrees, but learned that many had studied mathematics, just as she had at Hampton University and Virginia State, where she earned her master’s degree. NASA even paid for them to take a year of graduate engineering classes.

Darden had joined civil rights sit-ins during college, and saw promotion as a question of equal opportunity. Computresses served engineers.

“I did not want to spend my entire career just supporting somebody. I wanted to do my own work,” Darden, 76, said by phone from her home in Virginia. At the time, Darden was married to a middle school science teacher, and had taught math before coming to NASA. She was so nervous about how her boss might react, she contacted local colleges to line up teaching jobs, in case she was fired.

Her boss surprised her.

“He looked at me and said, ‘Nobody has ever asked me that question before,’” she said.

Darden pressed him. “The women do all the work,” she observed, “and they don’t get promoted very easily.”

Two weeks later, she was transferred — and promoted.

She later found out that a white computress married to a male engineer had already complained about the added schooling men received, and had been allowed to take graduate engineering courses. “I probably would not have gotten approved if that had not happened,” she said.

While working as an engineer and raising two children, Darden studied mechanical engineering part time for a decade at George Washington University until she earned her doctorate.

The first few weeks were the toughest.

“I was scared, because I knew the class was going to be all males,” she said.

For about a month, none of her classmates talked to her. But after she aced a math test, suddenly men were inviting her to join their study group.

After “Hidden Figures” was released, she toured the country, speaking after 14 showings with women still working at NASA. “We talked about what lessons can you learn from this,” Darden said, and her message was “how women did good work instead of complaining.”

Darden also speaks to engineering classes, where professors tell her they struggle to keep female students. She thinks the problem starts much earlier. “I tell parents, ‘Don’t let people tell you what your daughter can’t do,’” she said.

Darden had grown up helping her father change tires on the family car and prime the carburetor. When her mother gave her a talking doll, she “cut it open to see what made it talk.”

“I had a curiosity about what made things work,” she said. “I found the right home at NASA.”

On July 20, 1969, high school senior Sylvia Salinas left Oaklawn Assembly of God Church in Houston’s eastern barrio early with the rest of her family to gather at her aunt’s house and watch the moon landing on a grainy black-and-white television.

A year later, she was working as a secretary for astronaut Alan Shepard.

At the time, there were few women like Northcutt on the front lines at NASA, recalled Sylvia Stottlemyer, now married and retired in the Houston suburbs. But throughout the agency, “there were hundreds of other women that were working, women like me, that were behind the scenes.”

Stottlemyer had studied typing and shorthand, but encouraged by a teacher, took a civil service exam and qualified for two government jobs. Her father, a produce manager who never graduated from middle school and did the family driving, decided she would take the NASA job because it was closer.

“It was a traffic decision,” she said at her home near the NASA campus. “I happen to think it was fate.”

Astronauts would shape her life.

She came of age “mothering” the first men in space, veterans like Shepard, 15 to 20 years her senior, whom she addressed as “sir.” It didn’t occur to her that women could be astronauts too.

“No one questioned. It was just what it was,” she said. “The culture shift hadn’t happened yet.”

But the country and NASA were changing. Stottlemyer’s father had survived the height of segregation in south Texas, when he and other Latinos were told to drink from the hose behind a local store and to sit in the balcony at movie theaters. Now he bragged that his daughter “works for astronauts.”

By 1978, NASA had brought in a new, younger crop of astronauts, including the first women, Judy Resnik and Sally Ride. Ride was the same age as Stottlemyer, 26, but had already earned her doctorate in physics.

“I looked at them, and I was looking at myself in a different role,” she said. “And they came in seeing us as their equals.”

The female astronauts asked Stottlemyer and other secretaries and administrative staff for advice on NASA culture, and transitioned seamlessly, she said.

“What pleasantly surprised me was how easily they integrated themselves into the office. They wanted to be one of the guys,” she said.

The female astronauts also socialized with her, drinking, sailing and camping. Resnik became Stottlemyer’s best friend — and bridesmaid at her wedding.

Although Resnik respected her expertise, the astronaut also pushed her to go back to school. “She said, ‘You’re way too smart to be in this position,’” Stottlemyer recalled.

Stottlemyer earned a bachelor’s degree at the University of Houston and returned to earn a master’s in human resource management, all while working full time and raising her son (NASA helped pay her tuition). She attended women’s rights protests, wearing a button she still has in her office: “Space for Women.”

Because she was busy working on her master’s degree in 1986, Stottlemyer decided to send another secretary from Houston to Cape Canaveral in Florida to staff the ill-fated Challenger shuttle launch. Among those killed was Resnik. Stottlemyer helped organize her funeral.

She rose to the ranks of senior management, and continued to volunteer with the NASA Alumni League after she retired in 2014, promoting programs like robotics in local schools. Each year, she and at least 40 other former administrative staff members who call themselves the “Sixties Chicks” meet at the Villa Capri restaurant overlooking a lake near NASA to reminisce. Some are in their 90s.

“We’re losing more and more of them every year,” said Stottlemyer, 67. Sitting in her home office, surrounded by astronauts’ signed photos, uniform patches, flags flown in space and other NASA memorabilia, Stottlemyer said what was most precious were the opportunities she made for other women.

Soon after she left NASA, a young female engineer contacted her to say she had been struggling to fit in until she attended Stottlemyer’s retirement party and heard her story.

“ ‘Where you started and where you ended, it inspired me to want that kind of career,’ ” Stottlemyer