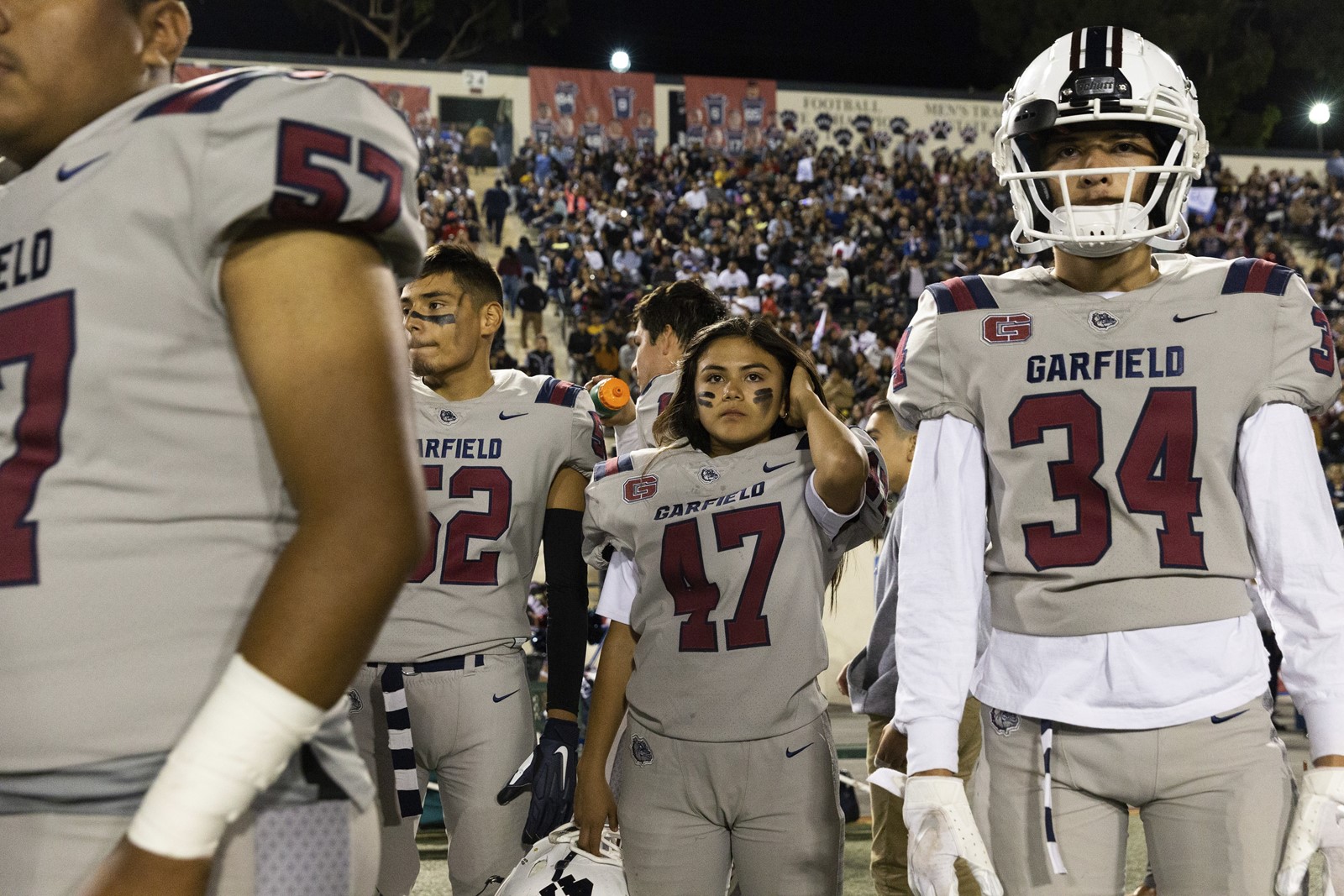 ike many girls her age, Dalia Hurtado is having an identity crisis.

Unlike most girls her age — to say nothing of most boys — Dalia deals with it by playing five sports: She’s on the varsity football, volleyball and soccer teams at Garfield High in East Los Angeles and participates in soccer, softball and boxing through neighborhood and club programs.

She’s a one-girl lesson in diversity: a U.S. citizen with Mexican parents, a tough girl with a tender heart, a rugged athlete who applies her makeup with great care, a teenager who wants to hang out with friends yet spends much of her free time on weekends helping her grandmother.

It’s become a way of coping too as she tries to find her way in this world, buoyed by a tenacity that has defined her life from an early age.

Dalia was born in Los Angeles to parents who have returned to Mexico; they can’t come here to cheer at games and won’t be able to send her off to the prom or watch her graduate next spring. Her life, like her family, has been split by a border that, for the moment, can’t be crossed from either side.

In the last few months, that life has been made even more complicated by a deadly virus that has taken away the two things — school and sports — that have kept her focused.

“At first I thought, ‘Well, we’ll be back in like two weeks, right?’ But those weeks have turned into months,” she said, adding: “I didn’t get to say goodbye.”

Nor did she get a chance to say goodbye to a close family friend in Nevada she knew as Tío Agustín; he died late last month from COVID-19.

“My grandmother has been sad,” she said.

For Dalia, though, these are just more potholes on a path that never has been well-paved.

Dalia first crossed the border when she was 6, following her mother to Colima, Mexico. But even then she was dreaming big and quickly concluded those dreams wouldn’t be realized in Colima, where her neighborhood, she said, was wracked by violence.

Dalia was just 10 at the time.

Her mother, Mireya Zamora, didn’t have the proper documents to return to the U.S., and Dalia’s five siblings didn’t want to leave Mexico, so Dalia got on the plane alone, flying here to join her grandmother, Elizabeth Meza, in a tiny back house off a crowded street two blocks north of Whittier Boulevard in East Los Angeles.

Her grandfather, Roberto Meza, lives in the house in front.

In Mexico, Dalia had played soccer with boys, and she refused to be limited by gender stereotypes. When she tried out for the football team at Garfield as a sophomore, her grandmother objected, telling her it was too rough. Dalia’s mother had been a cheerleader. Why not try that?

But it was precisely because it was rough that she wanted to do it.

It didn’t come easily at first. Standing a helmet and shoulder pads shorter than most of her teammates, Dalia made the team as a placekicker — and then promptly missed her first kick.

“It was embarrassing in front of all the guys,” she said. “But that didn’t stop me. I practiced and practiced hard.”

That practice paid off last October when Dalia, a junior wearing No. 47 on her red Garfield jersey and kicking left-footed, made the final extra point in a 61-0 rout of Huntington Park.

“I showed them that anything’s possible,” she said.

In part because of Dalia’s example, Garfield coach Lorenzo Hernandez says, there are now eight girls on his football team. None of them get special treatment.

Last fall, Dalia was rushing from volleyball practice every afternoon to change into her football gear, stuffing her long black hair into an oversized helmet and hitting the field to work on her kicking. In the spring, before the shutdown, she often rode a bus more than an hour each way to soccer, boxing and softball practices and games, doing homework on the way.

“The unique thing about it, which makes it really awesome, is that she’s [inspiring] a bunch of other female athletes to come out and try multiple sports, you know?” Hernandez said. “She does a tremendous job with that. And I don’t even think she realizes [it].”

On the weekends, when there weren’t any games or practices, Dalia helped her grandmother sell homemade tacos and sending much of what she earned to her family in Mexico.

That stopped for a while with COVID-19.

“There’s no parties. No more than 10 people can gather. It’s been hard. I don’t have any money,” said Dalia, who finally returned to work with her grandmother last Saturday.

Until then, she had even less to keep her occupied.

When there is nothing to do — like now, with school, sports and taco sales suspended by the coronavirus outbreak — Dalia’s mind takes her to dark, sad places.

“I stay in my room alone, and I think about my brothers and sisters and my mom,” she said, the words tumbling out rapidly without emotion or punctuation in a voice so soft listeners must work hard to follow along. “I go through those memories and all that when I’m alone.

“I’m laughing with my teammates and all that, then when I get home it’s like, damn. . I try my best not to think about it.”

Her strongest sport is soccer, which Garfield coach Jose Rodriguez thinks could earn her a college scholarship. He sees her enjoyment in playing the game.

“When she’s in practice, she’s just smiling, just wants to kick the ball, run and just play, forgetting about all the other problems,” he said. “I’m pretty sure she uses sports as a method of dealing with the absence of her mom.”

There are other adults in Dalia’s life who understand that she lives primarily in the hyphen that separates her identities.

“I think her thing right now is trying to find herself,” said Sandra Williams, whose daughter Samantha was one of the first girls Dalia met when she returned from Mexico.

Samantha and Dalia were drawn together because they both felt like outcasts. Dalia had just arrived from another country; Samantha was being teased by other kids.

That was six years ago, and Dalia has been a constant summer presence in the Williams home ever since.

“I tell her to do whatever is best for her. Don’t let other people influence whatever your heart tells you,” said Sandra Williams, who now lives in Corona. “She’s a really good girl for all she’s been through. She’s very smart.”

Dalia’s obsession with sports “disciplines her in a way that she won’t get lost,” Sandra Williams said. “If you’re born and raised in L.A., it’s hard. You can either go the bad way or the good way. Sports kept her going the right way. And kept her busy.”

With her school out and her sports suspended, Dalia, whose angular face is creased by long, dark eyebrows that dart up at the ends, giving her a perennially quizzical expression, has had to work harder to keep her body and mind occupied.

She’s spent time in Corona and with a cousin in Fresno. She yearns to visit her mother in Mexico, a trip she had long planned but was forced to cancel because of the threat of COVID-19.

“I don’t want to get them infected,” Dalia says. “What if I get it in the plane or something?”

So she runs in the morning and plays soccer in the yard by herself.

“It’s not the same,” she says, “because I don’t see my friends and my teammates.”

Her grandfather has promised to build her a small gym in the backyard, stocking it with weights. But that project hasn’t advanced much beyond the planning stages. For much of the spring she also studied online.

“I have good grades,” Dalia says. “I made my grandma proud this time.”

Her biggest worry is losing her grandmother, a loss that could send her back to Mexico.

“She worries a lot,” Williams said. Elizabeth Meza “is her main support.”

Dalia worries a lot about the family she left too.

“Yes, it’s hard to be without my mom, but my grandma, I feel like I have a mom because she’s so close to me,” she said.

Dalia’s duality is evidenced every time she speaks, with conversations gliding seamlessly from English to Spanish and back again, the language switching whenever she hits a word she doesn’t know.

That’s not uncommon at Garfield, where the student body is overwhelmingly Mexican American and where many share cross-border backgrounds similar to Dalia’s.

“I’ve had a lot of conversations with her,” Hernandez said. “I think she’s trying to find an identity, and the good thing about her is that she’s exploring all options.”

One of those options is medicine, Dalia says, a career path inspired by the current virus crisis. There will be many steps on the path to becoming an Army doctor, as she hopes. But Dalia has a track record for beating the odds. Making it as a high school football player and a soccer standout. Making it back to L.A. as a 10-year-old.

If she completes medical school, that’s a graduation she won’t allow her mother to miss. When she turns 21, Dalia can petition to have her mother rejoin her in Los Angeles, a move she’s already planning.

As for why she wants to be a doctor, her soccer coach said the answer is obvious — and indicative of Dalia’s character.

“She wants to help people.”