Critics say memo was a bid to undercut Russia inquiry 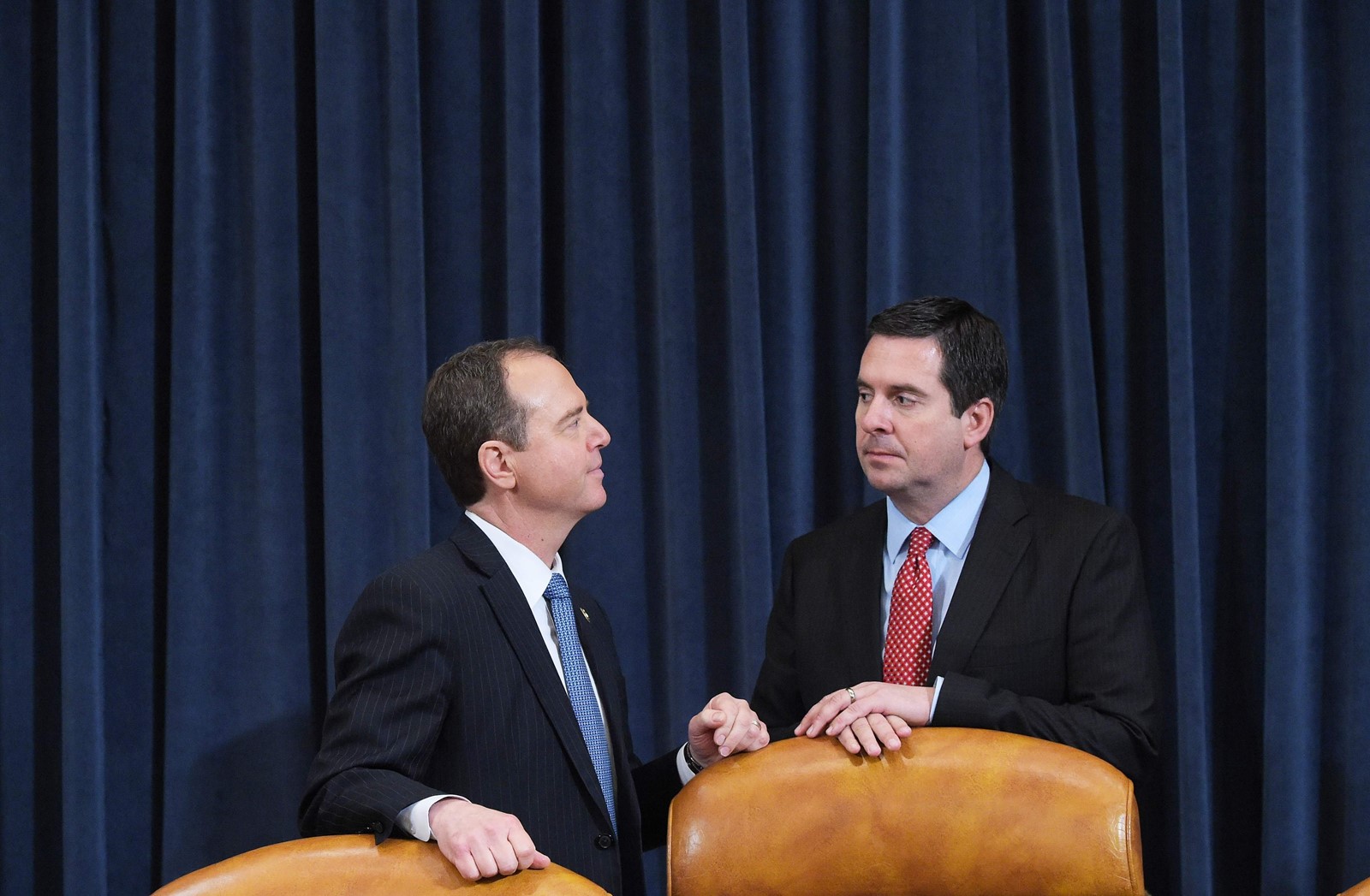 In his latest bid to portray the Russia investigation as biased against him, President Trump on Friday defied the advice of his top law enforcement and intelligence officials and declassified a controversial Republican memo that asserts — but does not prove — improper government surveillance during the 2016 election.

Given the intense partisan furor that preceded its release, the no-longer top-secret memo seemed far less explosive than Republicans had claimed, and far less dangerous to national security than Democrats had warned. It neither demonstrates the investigation was fueled by partisan politics at the FBI and Justice Department nor exposes previously unknown intelligence sources or methods.

The findings “raise concerns with the legitimacy and legality” of FBI and Justice Department interactions with the Foreign Intelligence Surveillance Court and represent “a troubling breakdown” of legal processes to protect the American public from surveillance abuses by the government, the memo’s Republican authors wrote.

Critics, including some leading Republicans, fired back that the memo shows no wrongdoing or misdeeds, and that it served only to undermine the ongoing special counsel investigation into whether anyone in Trump’s orbit assisted Russian meddling in the 2016 election or sought to obstruct justice later.

At its heart, the four-page memo says that Justice Department and FBI officials relied on research funded by Democrats to obtain a surveillance warrant to secretly eavesdrop on New York energy consultant Carter Page because of his meetings with Russian officials.

Page already had stepped down as a foreign policy advisor to then-candidate Trump when the warrant application was filed on Oct. 21, 2016, less than three weeks before the election.

The FISA warrant authorized government surveillance of Page for 90 days. It was reauthorized three times, including after Trump took office last year. A senior Democratic staffer on the House Intelligence Committee said each authorization came from a different member on the 11-judge bench.

The three renewals may indicate that the FISA court judges believed the counterintelligence operation was bearing fruit. But the memo faults the FBI for failing to tell the judges that Steele, who is identified in the memo as “a longtime FBI source,” was working for Fusion GPS, a company hired by lawyers for Hillary Clinton’s campaign to collect opposition research on Trump.

Arguably the memo’s strongest claim is that Andrew McCabe, then deputy director of the FBI, testified to the House committee last December “that no surveillance warrant would have been sought … without the Steele dossier information.”

The memo doesn’t directly quote McCabe, however, and Democrats immediately said that it gave a misleading account of his classified testimony. McCabe, whom Trump has repeatedly criticized in recent months, abruptly stepped down from the FBI this week ahead of his planned retirement.

Democrats also disputed the memo’s conclusion that FISA judges weren’t told that Steele was working on behalf of a research firm hired by Democrats.

“It’s misleading to suggest that the court had no idea there was a political motivation involved,” said Rep. Adam B. Schiff (D-Burbank), the ranking Democrat on the House Intelligence Committee.

The memo confirms for the first time, however, that the criminal investigation now led by special counsel Robert S. Mueller III was begun not as a result of the spying on Page — but from a separate FBI inquiry into another Trump foreign policy advisor, George Papadopoulos.

The Papadopoulos information, reportedly his boast to an Australian diplomat in July 2016 that the Russians had obtained damaging emails from the Clinton campaign, “triggered the opening” of the broader investigation now headed by Mueller, the memo says. Papadopoulos pleaded guilty last October to lying to the FBI about his contacts with Russian officials, and is cooperating with federal prosecutors.

In a statement Friday, Page applauded the memo’s release. “The brave and assiduous oversight by Congressional leaders in discovering this unprecedented abuse of process represents a giant, historic leap in the repair of America’s democracy,” he said.

The document was written by aides to Rep. Devin Nunes (R-Tulare), chairman of the House Intelligence Committee, who worked on Trump’s transition team. Nunes drew headlines — and an House Ethics Committee investigation — last spring when he made other unsubstantiated claims of improper surveillance. He was later cleared of wrongdoing.

“The Committee has discovered serious violations of the public trust, and the American people have a right to know when officials in crucial institutions are abusing their authority for political purposes,” Nunes said in a statement Friday.

Trump declassified the memo early Friday and gave the green light for the House committee to make it public.

“It’s a disgrace what’s happening in this country,” he told reporters in the Oval Office.

Trump deflected questions about the future of Deputy Atty. Gen. Rod Rosenstein, who oversees the Russia investigation and has already endured Trump’s attacks. When reporters asked Trump whether he intended to fire Rosenstein, or still had confidence in him, Trump responded, “You figure that one out.”

Earlier, the president tweeted that the “top Leadership and Investigators of the FBI and the Justice Department have politicized the sacred investigative process in favor of Democrats and against Republicans — something which would have been unthinkable just a short time ago. Rank & File are great people!”

Democrats, in turn, accused the White House and Republicans of using the memo to politicize a legitimate investigation into a foreign power’s attempt to influence a U.S. presidential election, and of undermining public confidence in the criminal investigation led by Mueller.

“Unlike almost every House member who voted in favor of this memo’s release, I have actually read the underlying documents on which the #NunesMemo was based,” tweeted Sen. Mark R. Warner (D-Va.), ranking Democrat on the Senate Intelligence Committee. “They simply do not support its conclusions.”

Sen. John McCain (R-Ariz.), head of the Senate Armed Services Committee, said the GOP attacks on the FBI and the Department of Justice would benefit Russian President Vladimir Putin by raising doubts about the U.S. justice system. “If we continue to undermine our own rule of law, we are doing Putin’s job for him,” McCain tweeted.

Rep. Trey Gowdy (R-S.C.), a strong Trump supporter who worked with Nunes on the memo, said he remained “100% confident” in Mueller. “The contents of this memo do not — in any way — discredit his investigation,” he said.

“It’s clear to me that this laughable hack job of a memo was a whole lot of nothing, hyped up to undermine the Mueller investigation,” Sen. Ron Wyden (D-Ore.) said.

James B. Comey, whom Trump fired as FBI director last May for what the president later called “this Russia thing,” was withering in his criticism.

“That’s it? Dishonest and misleading memo wrecked the House intel committee, destroyed trust with Intelligence Community, damaged relationship with FISA court, and inexcusably exposed classified investigation of an American citizen. For what? DOJ & FBI must keep doing their jobs,” he tweeted.

Experts who reviewed the memo shrugged off its findings as well.

“The effort to paint the Carter Page warrant as an original sin that poisons the entire Mueller investigation just isn’t here,” said Stephen Vladeck, a University of Texas law professor.

Robert Litt, a former general counsel for the director of national intelligence, said it was hard to draw conclusions from the memo without seeing more of the classified material presented to the court.

Atty. Gen. Jeff Sessions said the memo raised “an issue of great importance for the country” about the Justice Department’s performance. He said it should be examined by internal watchdogs, which include the inspector general’s office.

“I have great confidence in the men and women of this Department. But no Department is perfect,” Sessions said in a statement.

The FBI did not respond to requests for comment. Earlier this week, the bureau issued a highly unusual warning to the White House, expressing “grave concerns about material omissions of fact that fundamentally impact the memo’s accuracy.”

The Republican memo was released despite efforts by senior Justice Department and intelligence officials to block or delay its release.

On Monday, FBI Director Christopher A. Wray and Rosenstein went to the White House to ask Chief of Staff John F. Kelly to call Nunes and ask him to delay a House Intelligence Committee vote on releasing the memo. Kelly made the call but Nunes refused, according to a government official.

The Republican-led Intelligence Committee voted along party lines later that day to release the memo. It also voted against the simultaneous release of a rebuttal drafted by Democrats on the panel, a move that increased the divisions on the committee.

Wray sent a strong show of support to FBI employees in a video message Friday and made it clear he didn’t intend to resign over his clash with the White House. “You’ve all been through a lot in these past nine months and I know it’s often been unsettling, to say the least,” he said.

“Let me be clear: I stand fully committed to our mission. I stand by our shared determination to do our work independently, and by the book. I stand with you.”