From Santo Niño to pawn 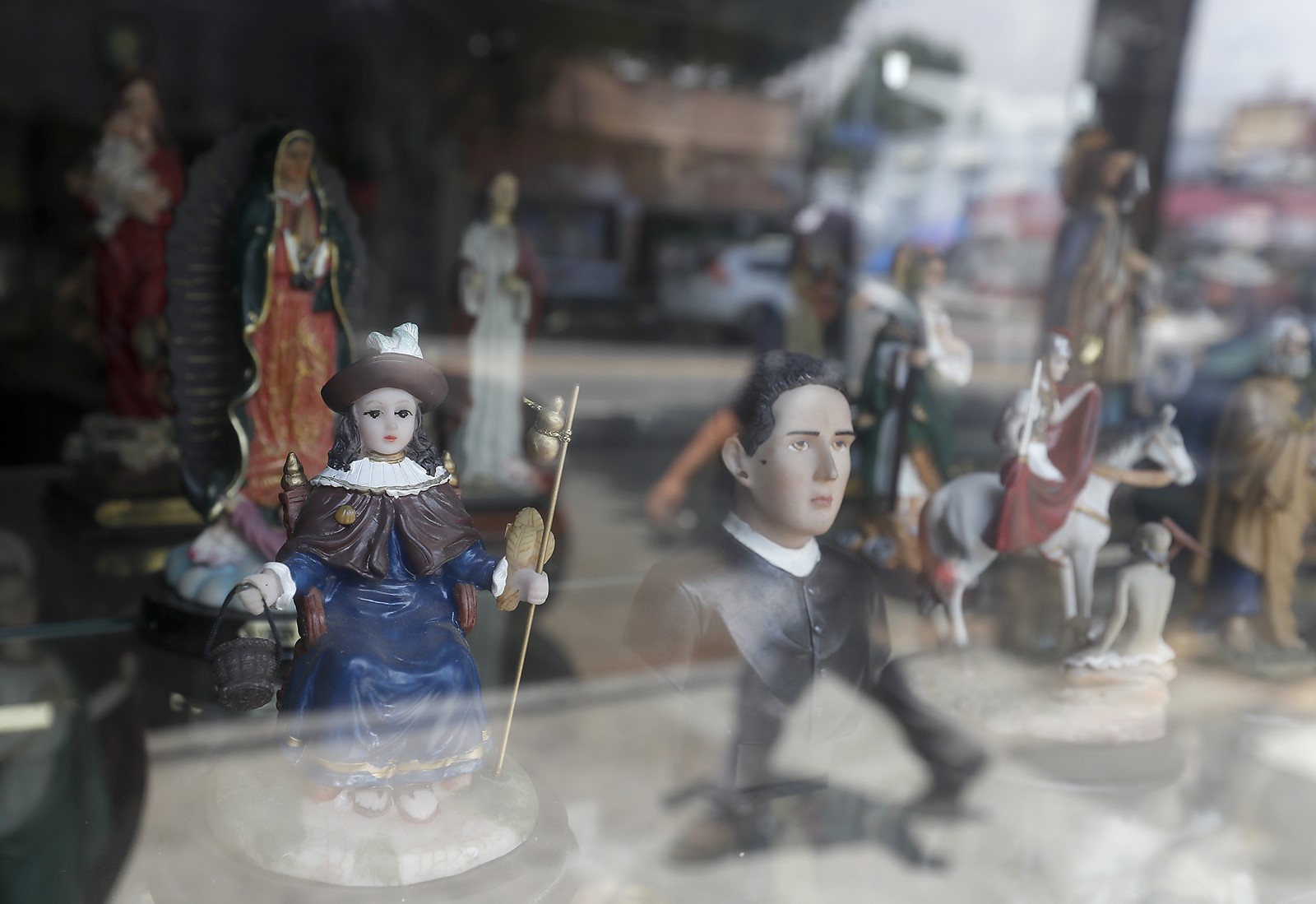 The Los Angeles councilman logged into Instagram in the early morning darkness before FBI agents descended on his Boyle Heights home.

Jose Huizar didn’t post an angry manifesto or confident selfie or plea for support in his time of need. Instead, the soon-to-be-arrested politician posted an image of the big-hatted baby Jesus known as Santo Niño de Atocha.

The patron saint of the wrongly accused.

Alas, dragging Mexican baby Jesus into his drama did not go well for the councilman, who stands accused of felony racketeering in a massive scandal that has roiled L.A. City Hall.

“The audacity to use this symbol when people have needed him to live, to survive in the face of real struggle,” said Nancy Meza, a 33-year-old Boyle Heights resident. She and others have publicly criticized Huizar for years for what she says is his role in the gentrification of the historic neighborhood. “Fool didn’t even spend a night in jail.”

Clad in a blue robe and brown cloak, with a walking stick and a breadbasket in his hands, sandals on his feet, and wearing a winsome smile, this patron saint of pilgrims is the humble boy king of Catholic icons that populate the Southern California landscape.

He’s not as well known among non-Catholics as the Virgin of Guadalupe. And he doesn’t match up to the flashiness of peers such as the Bolivian Virgin of Copacabana — who sports a golden crown bigger than her head — or Our Lady of La Vang, whose Vietnamese believers have erected elaborate shrines to her in parishes across Orange County over the past generation.

Instead, the Santo Niño — whose devotion dates back centuries to Spain, where the town of Atocha is, but now has a bigger following in the Mexican state of Zacatecas — has slowly spread across the Southland for over 100 years.

His favored domain isn’t public but private: as refrigerator magnets and small statues kept at home, on prayer cards stuffed inside wallets or glove compartments. Often the Santo Niño’s most ostentatious manifestation is in the form of a car decal.

Now, he’s an unlikely part of one of the biggest Los Angeles political corruption scandals in decades.

Huizar didn’t respond to a request for comment to explain his June 23 Instagram post, although the embattled politician had every reason to invoke the Santo Niño. He’s a native of Zacatecas, where a visit to his shrine in the town of Plateros is a rite of passage for the hundreds of thousands of and their descendants who call Southern California home.

And the Santo Niño happens to be the patron saint of prisoners too.

The icon’s faithful are blasting Huizar for what they feel is a double betrayal: a political downfall that has brought shame on the diaspora, yes, but also the use of their homeland’s most cherished symbol.

A ceaseless stream of to Southern California since the Mexican Revolution has made the Santo Niño’s presence like that of palm trees: unassuming but ubiquitous.

“He represents home, but also a type of a second chance and opportunity,” said Juan Javier Pescador, a history professor at Michigan State University and author of a 2009 book on the Santo Niño’s history. “This isn’t a saint that was welcomed by the clergy or hierarchy. It traveled through the domestic space, through families and especially women. They’re the ones who activated the cult.”

Manuel Figueroa, 55, born in the Zacatecas city of Fresnillo, featured an antique poster and statue of the Santo Niño at his now-closed Highland Park barbershop. Non-Mexican customers were so drawn to them — so vaguely familiar yet foreign — that they christened the figure “Atocha Baby,” which Figueroa took in stride.

“He’s the ambassador of Zacatecas,” said Figueroa. “He represents who we are: hard workers and immigrants. It was a shame to see Jose use him the way he did.”

L.A. Taco editor Javier Cabral is the son of two Zacatecas natives, and his mother always invokes the Santo Niño’s name whenever he travels.

“I think that at the point [Huizar] knew he was going down, might as well surrender to baby Jesus,” Cabral said. “But still! People feel like, ‘Why drag into your mess?’ ”

The Santo Niño’s trajectory from regional saint to political pawn reflects in many ways the story of in Southern California.

He was introduced to Zacatecasin the 1600s via the arms of Our Lady of Atocha, a Black Madonna statue prayed to by Spaniards during the Reconquista, the military campaigns that ended the Moors’ centuries-long occupation of the Iberian Peninsula. Our Lady of Atocha represented colonial might in a state whose silver deposits were among the largest in the world but which the Spanish empire quickly plundered.

Mexican Catholics instead grew to prefer the Santo Niño, around whom legends began to form: how he fed prisoners and saved minors and answered miracles. As the centuries went on, he left the embrace of his mother, lost his original orb and scepter and turned into the singular image beloved today.

His shrine — filled with thousands of testimonials of prayers answered — became one of the most popular in Mexico, behind those built for the Virgin of Guadalupe in Mexico City and the Virgin of San Juan de los Lagos in the state of Jalisco. But the Santo Niño was also carried to — first to New Mexico, where a chapel is dedicated to him in the village of Chimayó, then across the rest of the U.S. Southwest by miners and railroad workers who adopted him as a patron saint.

Although Catholic churches in Southern California have sold tchotchkes with Santo Niño’s image and held novenas in his name for decades, an official embrace didn’t happen until 1998, when a copy of the original Santo Niño brought from Plateros was displayed at Nuestra Señora la Reina de Los Ángeles Church near Olvera Street, universally known among local Catholics as La Placita.

Over 100,000 people came to view it, an event heavily covered by the Spanish-language media at the time and completely ignored by the English-language press.

Catholic bishops have leaned on Santo Niño’s drawing power ever since. In Santa Paula, Our Lady of Guadalupe Church has hosted the Plateros replica since 2006, although its annual summer visit is currently delayed until October because of the coronavirus. At Holy Sepulcher Cemetery in Orange, a monument to Santo Niño was erected in 2002 and stands on a pillar bearing the name of deceased Latinos, not all of them . “He became a transnational talisman,” said Adrian Felix, a UC Riverside ethnic studies professor who specializes in the diaspora and is from Jerez, the same that Huizar hails from. “He transcended Zacatecas, and is now a part of migrant mythology.”

It’s that folklore that Huizar tried to tap into with his Instagram post, argued Felix. Instead, he came off as “a politico reverting to cultural politics to curry favor with his in gestures that felt hollow.”

At La Placita, which keeps a well-worn statue of Santo Niño in an outdoor grotto alongside statues of St. Michael and the Virgin Mary, 58-year-old Cypress Park resident Ignacio Peña felt the same.

Inside the church gift store, Andrea Rodriguez threaded a new rosary as the first customers of the day strolled in. She had only magnets and scapulars of Santo Niño in stock; her statues and prayer cards were sold out.

The 36-year-old South Gate resident, a native of Michoacan, wasn’t familiar with Huizar’s post. But she frowned when told about it.

“It’s a lack of respect,” Rodriguez said in Spanish, as she fired up a Bic lighter to melt a knot into place. “God loves the bad guys like the good ones, but also not so much.”

Still, you didn’t expect a politician facing the possibility of prison time to invoke St. Jude, did you? He’s the patron saint of lost causes.