A proposal to save a Lynwood institution 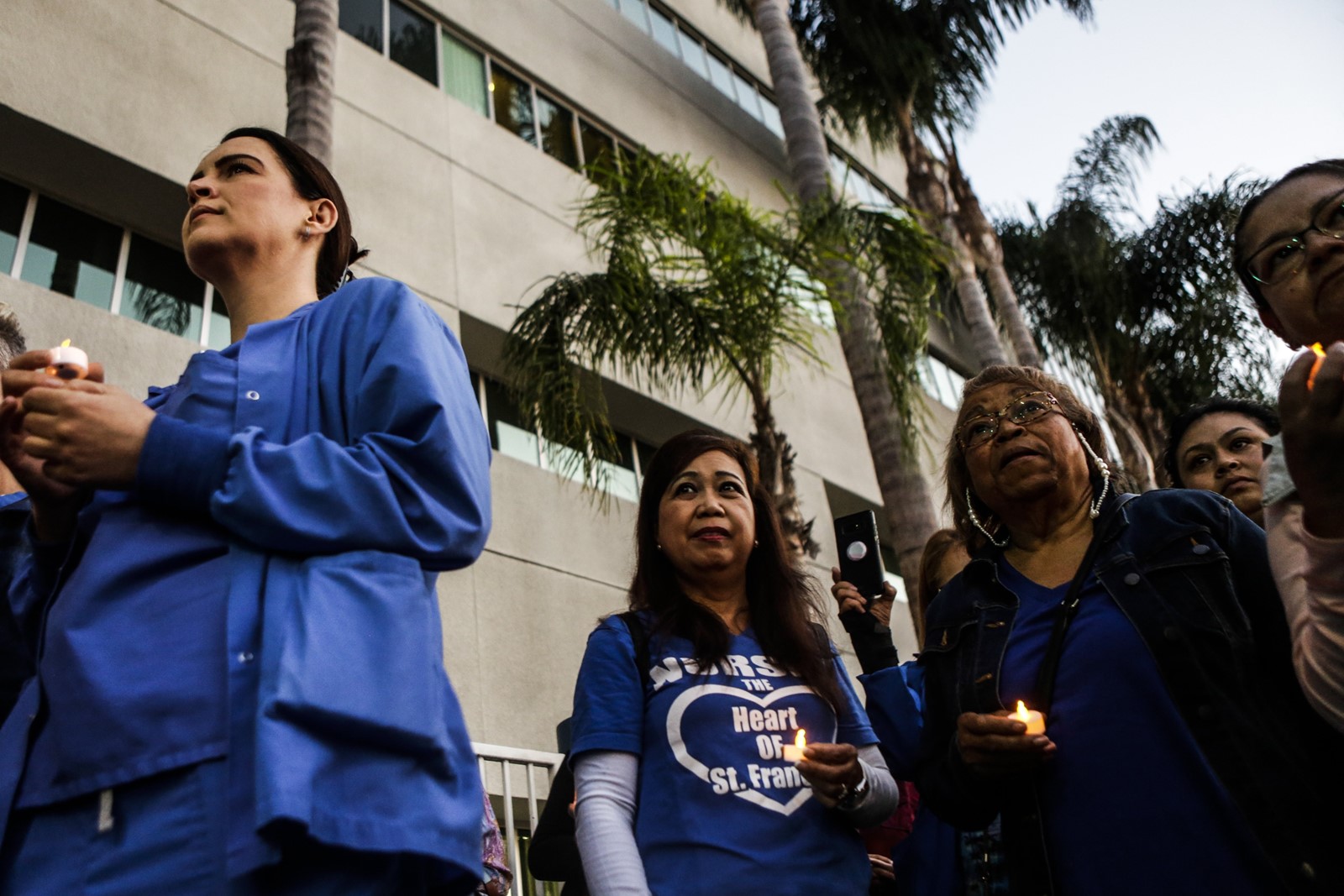 BEVERLY ROGERS, left, protests with her co-workers. St. Francis is the largest employer in the mostly working-class city of Lynwood. ()
PREVIOUS IMAGE

The reflective blue tower of St. Francis Medical Center is the tallest structure in Lynwood, a symbol of the outsized role the hospital plays in the mostly working-class city.

Founded in 1945, the facility delivers about 5,000 babies a year, more than almost any other hospital in the state. It is home to a trauma center, treating gunshot victims and others with serious injuries. And it’s the largest employer in Lynwood, a town of less than five square miles.

So news that the hospital’s parent company filed for bankruptcy protection last month has sparked alarm in the city, along with a bold plan to protect what officials say is a vital institution.

On Tuesday night, the Lynwood City Council voted to launch a bid to buy St. Francis. The interest from the city speaks not only to the hospital’s role in the community but also to concerns that it could otherwise be purchased by a company looking to squeeze it for profits, perhaps by reducing or even ceasing medical care.

“Regardless of their past history of good or unfair management, we can’t lose sight of keeping the hospital open,” said Lynwood Mayor José Solache. “That’s my No. 1 priority — how do we keep the hospital open?”

The nonprofit Verity Health System’s bankruptcy announcement has imperiled the future of six California hospitals, which mostly serve low-income patients. Verity officials say that 120 academic centers, hedge funds, health systems and other entities have expressed interest in bidding on one or more of the facilities now for sale.

“This would be novel to have a city get into the world of running a hospital,” he said.

The hospitals were originally owned and operated by Daughters of Charity of St. Vincent de Paul, but it began looking for a buyer in 2014 after years of financial struggles. Integrity Healthcare, a company created by New York hedge fund BlueMountain Capital Management, took over the hospitals in July 2015.

Soon-Shiong has been criticized for declaring bankruptcy so soon after gaining control of the hospital chain.

“There’s nothing inevitable about this situation,” said Dave Regan, head of SEIU-UHW, which represents nearly 2,000 workers at four Verity hospitals. The union has expressed concerns about Verity efforts to nullify workers’ pension contracts as part of the bankruptcy proceedings.

Entities related to NantWorks contributed more than $300 million within the last year in unsecured and secured loans and investments. But Adcock said those investments simply were not enough to stem the losses.

“You can’t keep swimming against that tide,” Adcock said.

The bankruptcy allows Verity to consider buyers for each of the hospitals. Adcock said nondisclosure agreements prevented him from discussing those conversations in detail. Any sales must ultimately be approved by the Bankruptcy Court.

“Our objective is to ensure patient care across the entire system,” Adcock said. “What we’re trying to do is balance what is the right mission, as well as our fiscal responsibility.”

As the sun set Tuesday evening, more than 50 nurses and hospital staff gathered on the sidewalk outside St. Francis hospital to protest its potential closure.

Lynwood City Councilwoman Aide Castro gripped a plastic candle in one hand and a microphone in the other as she addressed the group. She said that she gave birth to two children at St. Francis and that the hospital remains close to her heart.

“St. Francis Medical Center will make it through this storm,” Castro said. “I’m with you.”

The city’s plan to buy St. Francis would require issuing bonds for the cost of the hospital, which is estimated to be $200 million to $300 million, City Manager Jose Ometeotl said.

The city would then lease the hospital to a group of doctors who would manage it, he said. A board of trustees would manage the bonds and seek new owners if the doctors could not pay the lease, protecting the city from financial liability, he said.

“We’re not risking the general fund and pushing the city into a default or a bankruptcy,” Ometeotl said.

City officials say they hope to expand the hospital and transform it into a training institution.

“We want to make this a St. Francis University,” said Dr. Joe Ponnezhan, a critical care physician who works at the hospital.

Many hospital employees who gathered Tuesday said they worried about what would happen if the hospital closed. Other than St. Francis, the nearest trauma center to Lynwood is in Long Beach.

“Our patients who are en route because they had a stroke may not survive — and that could be my aunt, that could be my mom,” said Noé Guzmán, a nuclear medicine technologist who said he and his family members have received treatment at Verity hospitals.

Many health advocates said they feared the hospitals could be sold to someone focused on profits.

When the Daughters of Charity were searching for buyers four years ago, the for-profit Prime Healthcare was interested in purchasing the system. But it backed out after the state attorney general’s office mandated that it keep the hospitals open for 10 years and provide the same levels of charity care.

“I’m not sure that for-profit operators of this kind of operation are going to have the best interest of the mission in mind,” said John Baackes, head of L.A. Care Health Plan, a Medi-Cal managed care plan. “They run at the first sign of trouble, and I don’t blame them, because they’re backed by investors who are looking for return.”

In Santa Clara County, officials are trying to buy the Verity hospitals in San Jose and Gilroy, in part because they want to ensure the two hospitals continue to serve low-income patients. Officials want to integrate the two facilities into the county health system, said County Executive Jeff Smith.

Some advocates raised concerns about what will happen to some of the lesser-known Verity hospitals. The Daughters of Charity sale had required that all six hospitals be sold together, but Verity’s bankruptcy allows each hospital to be sold individually.

“You worry that one of them might not find a happy home,” said Wright, of Health Access California. “There might be one or two that are orphaned, and I think that’s obviously a concern for the unions and the community.”