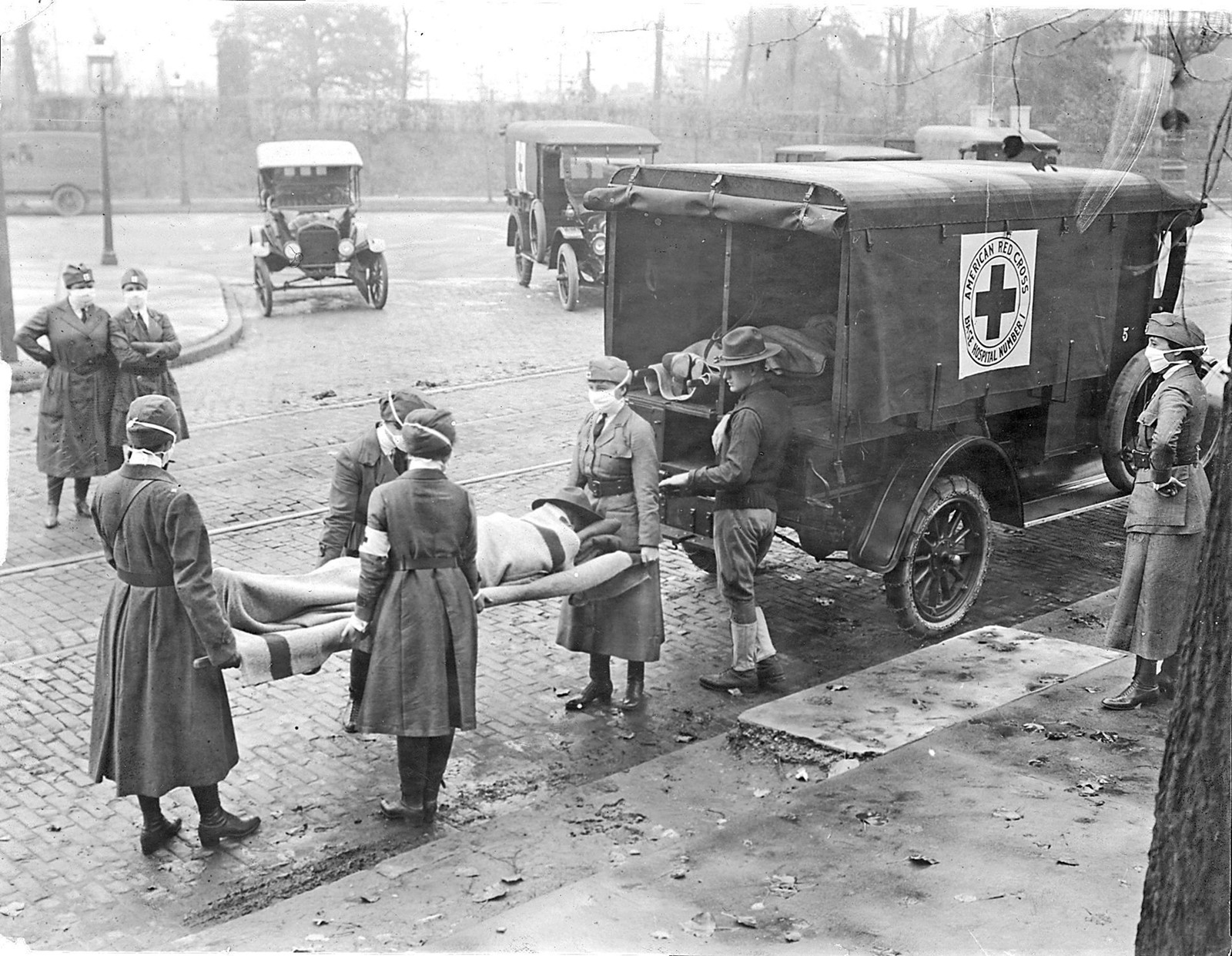 MEMBERS OF the American Red Cross remove victims of Spanish influenza from a house in 1918. The disease took the lives of 675,000 people in the United States and an estimated 50 million worldwide. (St. Louis Post-Dispatch) 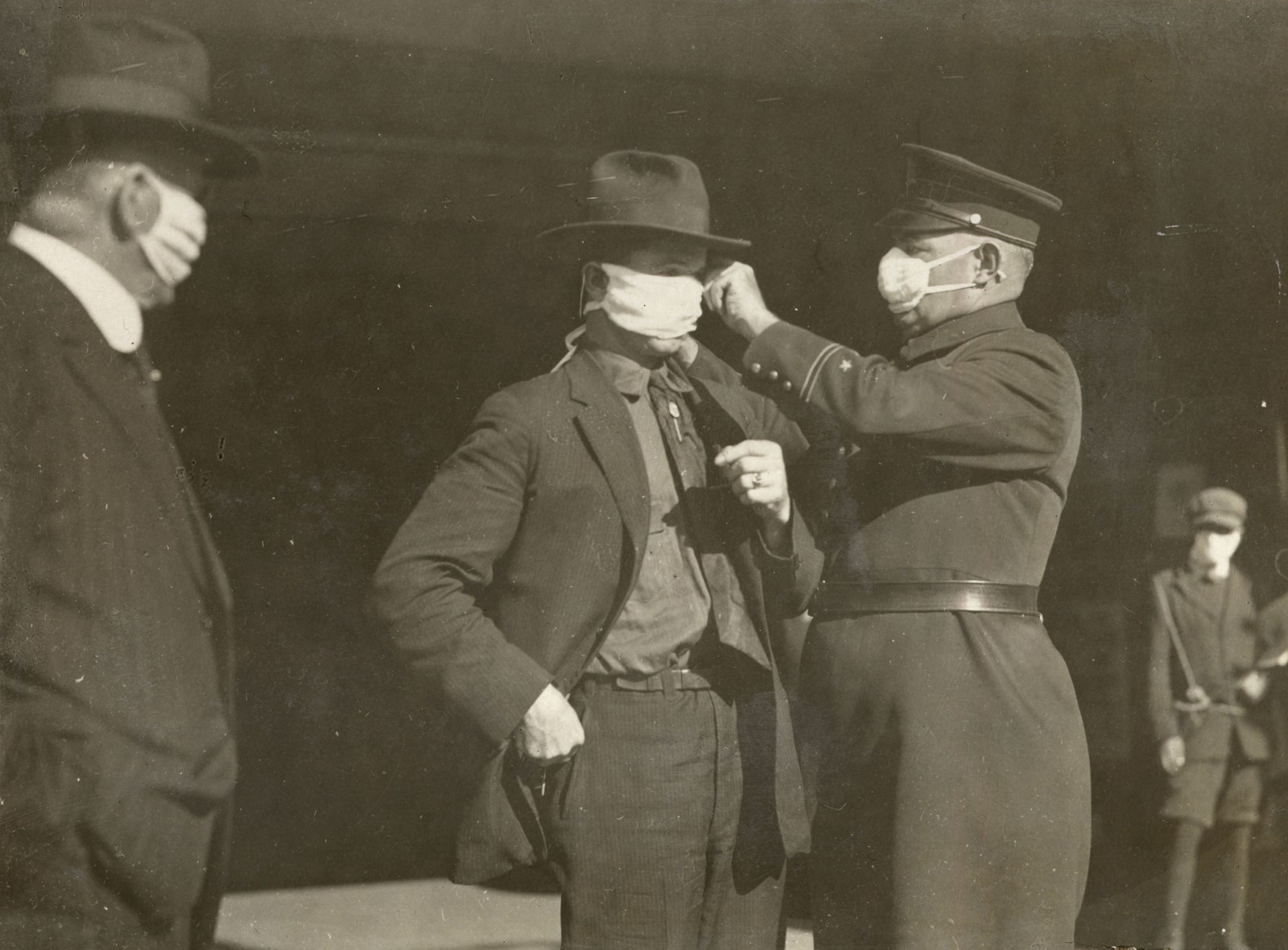 A POLICEMAN helped a citizen in San Francisco, where the wearing of face masks was described as “a patriotic duty.” Violators faced a fine of $5. (Hamilton Henry Dobbin California State Library)
PREVIOUS IMAGE

The big, striving city on the south coast moved fairly quickly at the first signs of danger — shutting down bars, pool halls, sporting events and more.

Its rival to the north waited at least a week longer to order closures, as its leaders went mask-happy, betting that their best weapon against the onrushing contagion was face coverings, and going slow on what is now referred to as “social distancing.”

The two great cities charted their disparate paths in the months that followed, straining — amid rudimentary science and massive public pressure — to craft the proper response to the greatest infectious disease emergency in modern memory.

Some 102 years later, this tale of two cities offers some cautionary insights as a few states, responding to President Trump’s urging, take steps to open up.

Los Angeles and San Francisco in the early 20th century were vastly different places than they are now. But they already had distinct cultures and leaders who responded to the great Spanish flu pandemic of 1918 in markedly different ways, thereby producing distinctly different outcomes.

At the helm in one city was a headstrong public health commissioner, who defied the mayor and City Council to lock down his city, but only so much. The other also had a physician as its chief health officer, but one who relied even less on quarantine-style limitations, grasping, instead, for a dubious solution.

Yet Los Angeles, San Francisco and 20 other cities across America shared one common failing, a mistake that would spur a “double hump” of contagion. That second surge of influenza infections in 1918 hit both Los Angeles and San Francisco and killed more people than the first wave in other cities, such as Denver, Kansas City, Milwaukee and St. Louis.

“The really important lesson of 1918 is to keep interventions in place as long as possible,” said Alex Navarro, assistant director of the Center for the History of Medicine at the University of Michigan. “Because once the controls are removed, it’s very difficult to reinstate them.”

The Michigan center, along with the national Centers for Disease Control and Prevention, compiled and analyzed historical accounts of the 1918 plague. Their research found “a strong association between early, sustained and layered use of [non-pharmaceutical interventions] and mitigating the consequences of the epidemic.”

In Los Angeles, the first signs of trouble arrived in mid-September 1918, when sailors aboard a Navy ship in San Pedro fell mysteriously ill. By the end of the month, 55 students at Polytechnic High School in downtown L.A. had the bug, which eventually killed 675,000 in the United States and an estimated 50 million worldwide.

The city’s response in the coming months would be crafted largely by a headstrong North Carolinian, Dr. Luther Milton Powers. The doctor managed to remain in power through the tenures of at least half a dozen L.A. mayors.

Publicly, city Health Commissioner Powers called the cases “alleged influenza,” but he advised Mayor Frederick T. Woodman in private to prepare a campaign to stop an epidemic in Los Angeles, then a city of fewer than 600,000 souls.

By Oct. 11, the mayor had declared a state of emergency. Commissioner Powers ordered most public gathering places — including movie houses, theaters and pool rooms — closed as of 6 p.m. that night. Adding a peculiarly L.A. flavor, Powers told the city’s ascendant movie moguls they would have to stop filming mob scenes, according to the Michigan archive.

Even though its first influenza cases appeared about the same time as those in L.A., San Francisco’s board of health did not vote to shut down “all places of public amusement” until a week later, Oct. 18. The city did not include churches in the shutdown, leaving that to their leaders’ discretion.

The importance of acting promptly might not have been obvious in 1918. But this week, UC Berkeley biostatistician Nicholas Jewell and his daughter Britta, also an epidemiologist, calculated the enormous advantage of early social isolation. In the current pandemic, a one-week advance, nationally, in social distancing could have cut the total United States death count from something around 60,000 to 23,000, they projected.

In the early-20th-century outbreak, Los Angeles stuck to its more rigorous response, despite considerable pushback. Religious leaders questioned the constitutionality of closing churches, and the Ninth Church of Christ Scientist, on South New Hampshire Street, reopened, only to see its leaders promptly arrested.

Los Angeles shut down its Liberty Day parade, while many other cities went ahead with the mass gatherings, exposing tens of thousands of people to others who were contagious. “In Los Angeles, however, residents had at least one less opportunity for getting sick,” the University of Michigan researchers concluded.

L.A. theater owners protested that the shutdown should be even broader, to stop the virus more quickly. They demanded the closing of shops and department stores. But Powers thought such a comprehensive shutdown would be impractical. The stores remained open.

San Francisco’s leaders eventually also closed a significant number of public facilities, but they obsessed on a singular response to the disease: face masks. That response came courtesy of the city’s health officer, Dr. William C. Hassler. He had first gained acclaim after the Great Earthquake of 1906, for helping fight off a rat infestation and fears of bubonic plague that menaced the city.

Hassler came to believe that face masks would help San Francisco tamp down the influenza, which experts theorized had been brought back from Europe by soldiers returning from World War I. It was later determined that the flu originated from an H1N1 virus, with genes of avian origin.

The doctor began by ordering barbers to wear the coverings, quickly expanding the order to workers at rooming houses, banks, drugstores and shops, the University of Michigan archive says.

By Oct. 25, the Board of Supervisors required every resident and visitor to the city to wear a mask. The Red Cross pronounced that “the man or woman or child who will not wear a mask now is a dangerous slacker.” California Gov. William Stephens concurred, calling it a “patriotic duty for every American citizen.”

The vast majority complied, with those who did not usually being fined $5. Eventually, “slackers” were jailed, and San Francisco’s lockup soon filled with the malefactors. Even with less rigorous restrictions, new influenza cases had declined enough that, by Nov. 13, 1918, Hassler recommended reopening San Francisco.

When the ban officially ended on Nov. 16, pent-up San Franciscans swarmed theaters, movie houses and sports arenas. They thrilled to an appearance by movie star Roscoe “Fatty” Arbuckle. The city’s stringent mask law remained in place, but residents of freewheeling “Baghdad by the Bay” had grown well tired of the pesky shrouds.

Then a photographer caught Hassler and Mayor James Rolph at a boxing match, their masks off. Hassler said his mask might have slipped off as he smoked a cigar. He paid $5 on the spot. Rolph agreed to pay the then-hefty fine of $50.

Within a few days, though, the city leaders believed the plague had eased enough to end all restrictions. At noon on Nov. 21, a whistle sounded across the city, and many ripped off their masks and threw them into the streets. Reported the San Francisco Chronicle: “The sidewalks and runnels were strewn with the relics of a torturous month.”

Los Angeles went in a different direction. Despite repeated attempts by Mayor Woodman and others, the City Council refused to order Angelenos to wear masks, with the exception of health workers and those known to be in contact with influenza patients. (It didn’t hurt that the U.S. surgeon general had questioned the usefulness of masks.)

Other issues that moved front and center 100 years ago would be echoed in the L.A. of 2020. Church leaders demanded to be able to restore group worship, but the city insisted that indoor services be put off. And civic groups fought (somewhat successfully, back then) to get hotel rooms set aside for the poor and infirm.

Most significant, L.A. had gone into semi-quarantine a week before San Francisco and stayed shuttered longer, reopening public facilities Dec. 2. That meant L.A.’s controls (if not its face masks) stayed in place 16 days after San Francisco lifted restrictions; after beginning seven days earlier, it was a 23-day isolation advantage.

Both locales would soon learn that they had not been cautious enough. A quick jump in cases in Los Angeles led to a re-closing of schools, which did not open again until January 1919. San Francisco saw its own spike in influenza deaths and ordered the public to put their masks back on as of Jan. 10. They could not cast them off again until February.

The media may have been more rudimentary in those days, but politicians already knew something about spin. San Francisco’s Dr. Hassler soon proclaimed that San Francisco “was the only large city in the entire world to check its epidemic so quickly.”

But the U.S. Public Health Service disagreed. San Francisco had suffered more than all other major American cities, with a death rate from the Spanish flu approaching 30 per 1,000 people. The later CDC review showed that both of California’s landmark cities suffered “second humps” of infection, though San Francisco’s was more severe.

The researchers examined “excess” death rates, the number who died of influenza above the normal yearly expectation, in 50 cities. L.A.’s rate was 494 excess deaths per 100,000 residents, lower than that of many other American cities. With its shortened public distancing requirements and preoccupation with masks, San Francisco suffered 673 excess deaths per 100,000.

A century later, leaders in Los Angeles and San Francisco continue to act independently, if somewhat more uniformly than their precursors.

After the first COVID-19 death on March 4, Los Angeles County joined three other counties in declaring states of emergency. Three days later, San Francisco shut down nonessential group activities in city-owned facilities, including City Hall, libraries and piers. On March 11, it banned all mass gatherings of 1,000 or more people, prohibiting fans from heading to Golden State Warriors games at the new Chase Center.

On March 15, Los Angeles Mayor Eric Garcetti jumped ahead of county health authorities in L.A., ordering the mandatory closure of bars, nightclubs, movie theaters, bowling alleys, gyms and other facilities, and urging churches to limit large gatherings. That Monday, San Francisco (where county and city government are one) joined six other counties in ordering residents to “shelter in place,” staying at home for all but essential activities.

While the shutdowns, south and north, came in fairly quick succession, the communities had grown worlds apart by the dawn of the great coronavirus outbreak of 2020.

San Francisco has evolved from a brawling port city and economic hub into an upscale enclave of fewer than 900,000 people, where wealthy tech workers have displaced many older, and poorer, residents. L.A. County, in contrast, has come to define the nation’s urban sprawl and an even more sprawling inequality gap. The county’s more than 10 million residents include some of the richest and poorest Americans.

Using a variety of measures, the CDC found, prior to the outbreak, that upscale San Francisco had “low to moderate” vulnerability to disease and other public health threats. Los Angeles County’s makeup, in contrast, left it with “high” vulnerability to health emergencies. By Sunday, San Francisco had recorded 20 deaths, while L.A. County, with 11.5 times the population, had logged 30 times as many deaths: 601.

Both north and south, leaders shared one benefit: They had been given a chance to learn the lessons of history.

On Tuesday, San Francisco Mayor London Breed told the media she was well aware of the premature celebrations before the end of the 1918 contagion. She described how the illness “came back with a vengeance.”