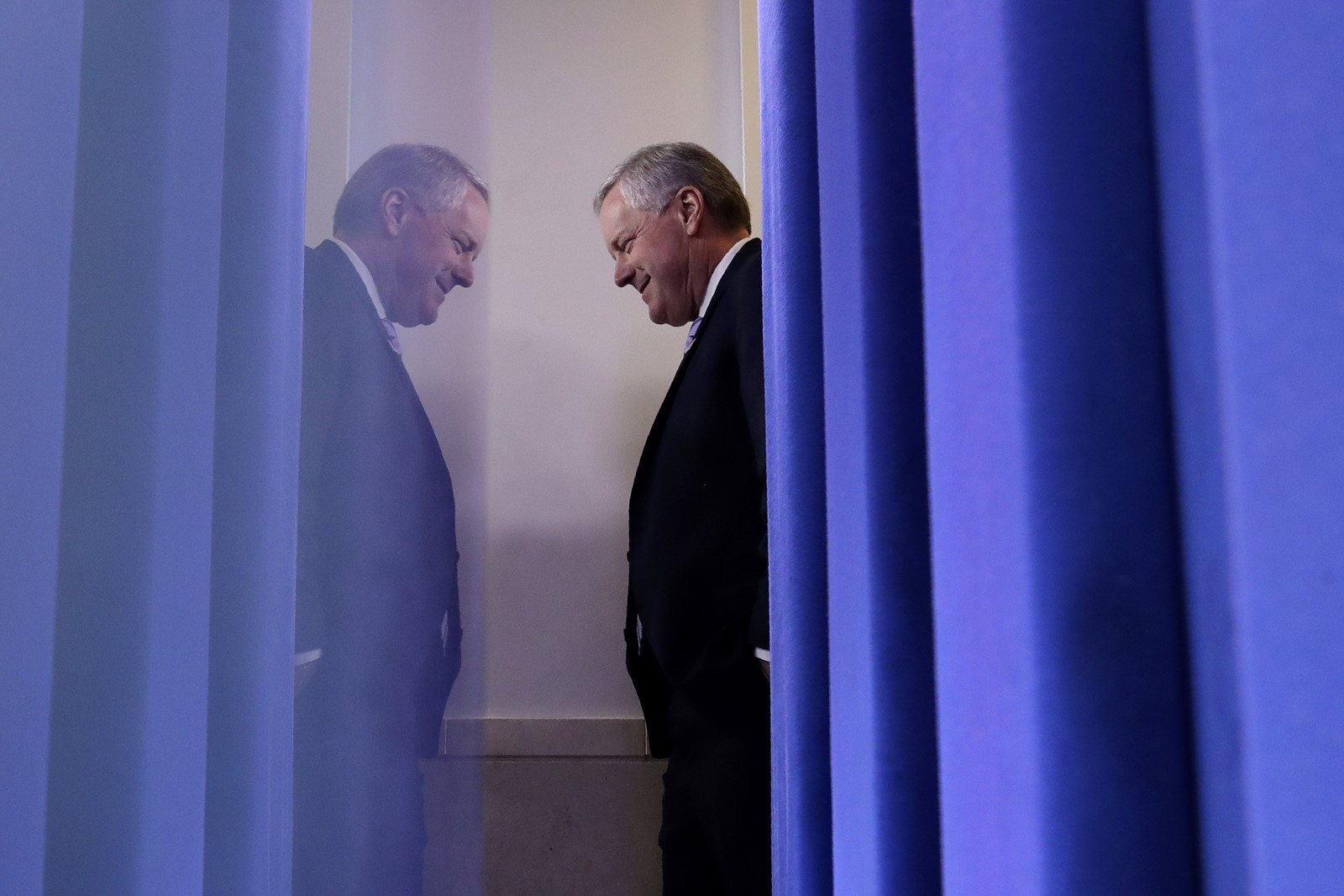 MARK MEADOWS at the White House in 2020. A GOP lawmaker called the vote “as wrong as it gets.” (Patrick Semansky Associated Press)
PREVIOUS IMAGE

The House voted on Tuesday to hold former White House Chief of Staff Mark Meadows in contempt of Congress for refusing to cooperate with a special committee investigating the Jan. 6 Capitol riot, setting the stage for possible criminal prosecution of an advisor to former President Trump.

The vote, 222 to 208, was the second time in recent months that the House had held a former Trump advisor in contempt, and it was the first time since the 1830s that the chamber had leveled such a sanction on one of its former members. Two Republicans joined all Democrats present in voting for the measure.

“Mr. Meadows is a central participant and witness to the events of Jan. 6,” Rep. Adam B. Schiff (D-Burbank), a member of the House committee investigating the insurrection, said before the contempt vote. “If he can get away with ignoring the law, and witnesses summoned before Congress can merely pick and choose when they comply, our power of oversight will be gone.”

The contempt vote came a month after the House took the same action against Stephen K. Bannon, alleging the the Trump confidant and former White House advisor had refused to comply with the House committee’s subpoena for information and testimony. Bannon was indicted by a federal grand jury last month on two charges of contempt of Congress. He is set to go on trial in July.

The House action against Meadows followed a 9-0 contempt vote on Monday by the House Select Committee to Investigate the Jan. 6 Attack on the U.S. Capitol. Lawmakers on the panel said Meadows initially provided 9,000 pages of records before refusing to provide more records or show up for a deposition last week. They said Meadows is uniquely positioned to provide information to discuss the role Trump and the White House played in inciting the riot and responding to it.

“We’ve given Mr. Meadows every opportunity to cooperate with our investigation,” Rep. Bennie Thompson (D-Miss.), chairman of the House panel, said Tuesday. “We’ve been more than fair. He’s brought this situation on himself. But there is no doubt in my mind that he’s in contempt of Congress and has to be held accountable.”

Republican House members countered that Democrats were pursuing the contempt charges for partisan reasons. Just two of the nine Republicans who voted to hold Bannon in contempt did so on Tuesday. Meadows served as a GOP House member from 2013 to 2020, when he took over as Trump’s chief of staff.

“He is a good man, and he’s my friend. This is as wrong as it gets,” Rep. Jim Jordan (R-Ohio) said before the vote. “Your lust for power, your lust to get your opponents is so intense that you don’t care.”

Meadows’ attorney, George Terwilliger III, has asserted that the former White House advisor cannot comply with the subpoena for two major reasons. As a former top presidential advisor, Meadows shouldn’t be compelled to testify before Congress because it might result in staffers wary of providing candid advice to presidents.

He also said Meadows did not wish to undermine Trump’s assertion of executive privilege, a legal doctrine that has allowed presidents to withhold certain confidential communications from public disclosure.

Meadows “has fully cooperated as to documents in his possession that are not privileged and has sought various means to provide other information while continuing to honor the former president’s privilege claims,” Terwillger said in a statement Tuesday before the vote.

Citing executive privilege, Trump has sought to block the National Archives from turning over his White House records to the House committee. His case suffered a setback last week when a federal appeals court rejected his arguments, setting the stage for those documents to be given to Congress if the Supreme Court declines to intervene.

The House panel, which has two Republicans, has interviewed more than 300 witnesses and subpoenaed more than 40 people as it seeks to paint a clearer picture of the day’s violence and what contributed to it.

Goaded on by Trump’s months-long, falsehood-filled campaign that the 2020 election had been stolen, hundreds of his supporters stormed the Capitol on Jan. 6, hoping to block the certification of President Biden’s electoral college victory. More than 700 people have been charged by federal prosecutors in the Capitol riot.

Rep. Liz Cheney (R-Wyo.), the panel’s vice chair, said the committee wants to question Meadows about incidents that are not covered by executive privilege. In particular, she said, lawmakers want to learn more about Meadows’ role in a phone call in January between Trump and Georgia elections officials. During the call, the former president urged a Georgia elections official to “find 11,780 votes” to change the result of the election in Georgia.

Cheney she would also like to explore Meadows’ dealings with Justice Department officials and a member of Congress about Trump’s desire to replace his acting attorney general with an official who would help him press his baseless fraud claims.

In a dramatic moment before the committee’s vote Monday, Cheney read aloud from text messages Meadows received from Fox News personalities and one of Trump’s sons, all urging him to take action to convince Trump to stop the violence.

“He’s got to condemn this s— ASAP. The Capitol police tweet is not enough,” Donald Trump Jr. texted Meadows, according to Cheney.

Laura Ingraham, a Fox News host, texted Meadows: “Mark, the president needs to tell people in the Capitol to go home, this is hurting all of us. This is destroying his legacy.”

Sean Hannity, another Fox host, texted Meadows: “Can he make a statement? Ask people to leave the Capitol.”

“Mr. Meadows’ testimony will bear on another key question before this committee: Did Donald Trump, through action or inaction, corruptly seek to obstruct or impede Congress’ official proceeding to count electoral votes?” she said. “Mark Meadows’ testimony is necessary to inform our legislative judgments.”