Voters in 2020 could limit law’s tax breaks to homeowners and small businesses. Both sides are gearing up. 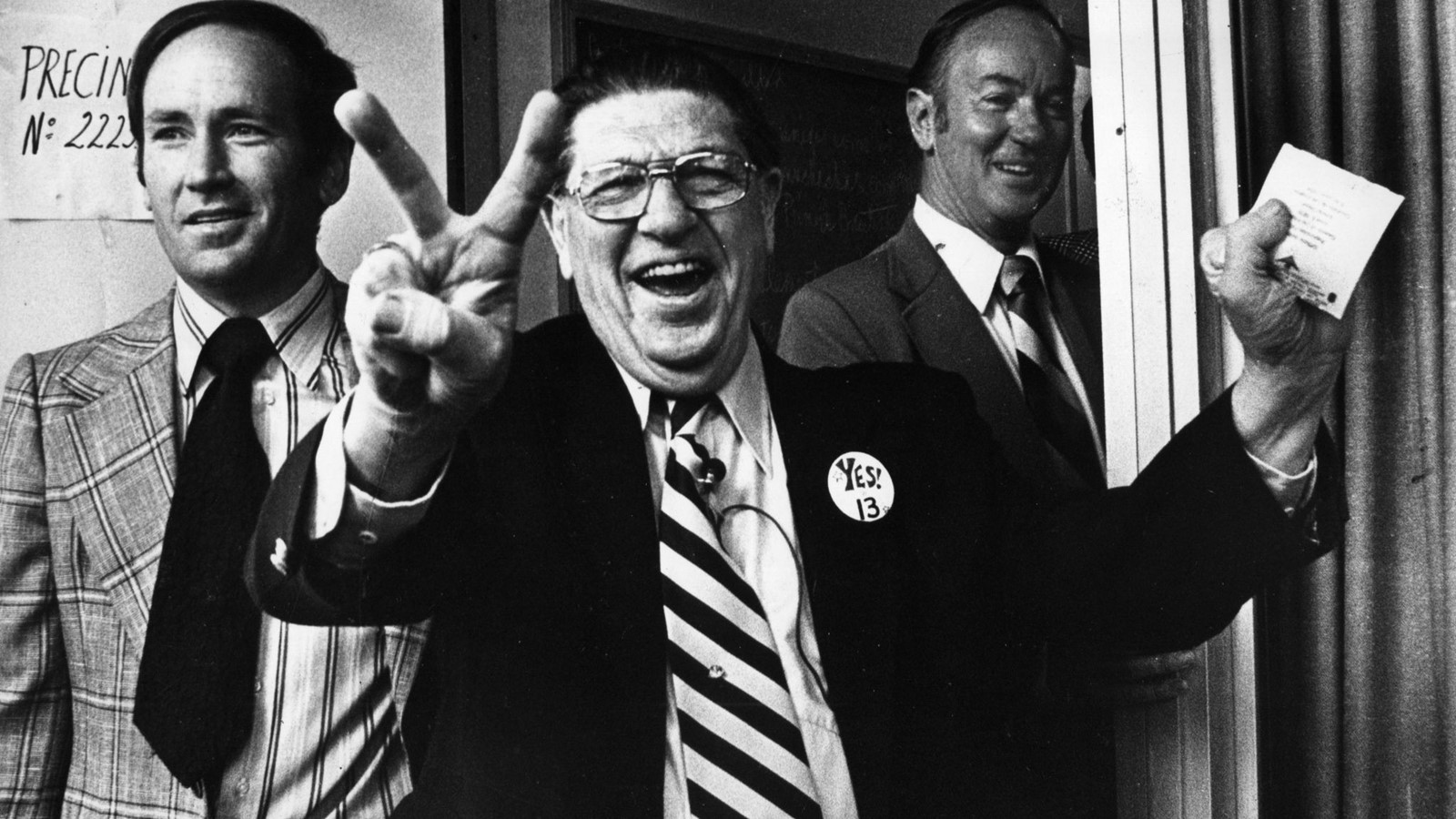 No brand in California politics has ever had the staying power of Proposition 13, the 1978 tax cut that served as a primal scream from angry voters and became a symbol of their reluctance to pay more money for more government services.

But four decades later, it is critics of the landmark ballot measure who are angry. Their demand to downsize Proposition 13 by excluding most commercial property from the law’s strict tax limits is all but certain to win a spot on the November 2020 ballot, an epic campaign clash that could alter California’s political landscape for years to come.

“The electorate has changed a lot in the last 40 years,” said Mark Baldassare, president of the nonpartisan Public Policy Institute of California. “But the broad perception of Proposition 13 has not changed that much in our polling.”

Though Proposition 13 generally remains popular — 65% of likely voters in a PPIC survey last year said the law has been mostly a good thing for the state — polls have also suggested voters are willing to rethink the tax rules for businesses. They are likely to get that chance with the ballot measure submitted to state officials for formal review on Tuesday.

Under the proposed initiative, county assessors would split their tax rolls into two lists. Homeowners and some small businesses would still receive the full Proposition 13 benefits: a 1% tax based on a property’s purchase value and annual tax increases of no more than 2%.

But commercial and industrial property owners would be required to pay more. While their tax rates wouldn’t change, beginning in 2022 the levy would be based on the current market value of the real estate. Business property values would have to be updated by county assessors at least every three years.

That voters will be asked next year to consider a so-called “split roll” change to Proposition 13 has been known for months. A coalition of liberal community activists put up enough cash in 2018 to pay for signature gathering and qualify an initiative for the ballot. But the group was thought to lack the money needed to wage a full-scale campaign.

The group that unveiled a replacement version of the ballot measure Tuesday includes some of California’s most powerful public employee unions — including Service Employees International Union, the California Teachers Assn. and the California Federation of Teachers. Their decision to endorse the effort makes it likely that tens of millions of dollars will be at the ready for the campaign ahead.

The most significant difference between the new proposal and the one circulated last year is that property owned by a small business — defined as having 50 or fewer employees — would keep its current low-tax rules, as long as its value isn’t more than $3 million. That amount would be adjusted for inflation in future years.

Schools would receive most of the new tax revenue, estimated at at least $7 billion a year under the earlier version of the ballot measure. That money would be in addition to the funds K-12 schools and community colleges currently receive, estimated at $103.4 billion in the state budget enacted last month. Local governments would receive a share of the new property tax revenue.

The focus on schools isn’t accidental. Baldassare noted that public support for the idea of loosening the property tax limits on businesses increases in polls by as much as 10 percentage points if voters are told the money will go to education.

Defenders and critics of Proposition 13 alike agree that some version of the “split roll” change has been discussed for years. Lenny Goldberg, a former lobbyist and perhaps the most well-known proponent of rethinking the landmark law, said no provision of what’s often called “the third rail of California politics” was more sacrosanct in efforts to revamp the law through the years.

Corporations have long been targeted by critics as less deserving of the tax break. Their executives and shareholders may change over time, but the legal property owner — the company — does not. From Silicon Valley to Southern California, activists have pointed to multibillion-dollar corporations with land values dating back to the early 1970s.

Joel Fox, who cut his political teeth as a tax-cutting apprentice to Howard Jarvis, the iconic champion of Proposition 13, said big business has always been an easy target for those who have blamed the law for a variety of California’s problems.

“They know that attacking the residential property tax isn’t as strong,” he said. “And look at any movie. Who’s the bad guy? It’s corporate greed.”

Voters will undoubtedly be asked to consider more than the details of property assessments as the new campaign begins. Inevitably the debate will turn to the broader consequences of Proposition 13.

“Over the last 40 years, California has lost hundreds of billions of dollars in revenue, leading to chronic underfunding of schools, services and local communities,” said Carol Moon Goldberg, president of the League of Women Voters of California and one of the new ballot measure’s proponents.

Few can dispute that no one really knew how those services would be paid for once the tax cut took effect. That was certainly true of Jarvis, the Los Angeles political gadfly who became an irascible tax fighter and the embodiment of the 1978 campaign.

“We have made clear our goals,” he bellowed into the microphone during his victory speech on election night, sending a message to local and state officials across California. “It is your responsibility to make Proposition 13 work by cutting the barrels of lard out of the government budget.”

Opponents of the new ballot measure aren’t likely to attack the programs that would benefit from billions of dollars in new taxes. Instead, they will insist the cost will be passed along to customers of the industries hit with higher property taxes.

In a statement on Tuesday, California Business Roundtable President Rob Lapsley called the 2020 ballot measure “a major, multibillion-dollar tax on all Californians in the form of higher prices on everything we buy — from groceries and gasoline to diapers and day care.” He and other business leaders promised an “aggressive” campaign to kill it.

Supporters of the effort to revamp Proposition 13 have spent years convincing even those who share their ideology to embrace the blistering battle that lies ahead. One key impediment to that effort is now gone: Jerry Brown, who was governor when Jarvis accused state leaders of ignoring the plight of homeowners. The veteran Democratic politician refused to embrace the “split roll” effort at every turn during his final eight years in office, insisting the campaign couldn’t be won.

His successor, Gov. Gavin Newsom, has been less circumspect. But he said in January he hoped to instead negotiate a political truce of some sort over changes to California’s system of taxation, something he reiterated on Tuesday.

“We’re working with the parties,” Newsom told reporters. “We’re discussing it, and I’ll leave it at that.”

But compromise seems unlikely. Fox, who said Proposition 13 supporters believe that the ballot measure won’t stop at loosening commercial property tax limits, predicted the business community will spend whatever it takes to defend the system as it has existed for 40 years.

“This issue, I think, crosses a lot of lines. I think a lot of industries could come together,” he said.

The coalition championing the Proposition 13 revision believes next year could be the best shot it will get at limiting tax protections to homeowners and mom-and-pop businesses. Presidential elections always turn out more voters, and the possible reelection of President Trump could inspire millions of liberal California voters to cast ballots — the subgroup most likely to embrace a campaign built around a message of making corporations pay more in taxes.

Baldassare, who has seen steady but not overwhelming support for the commercial property tax change to Proposition 13, says it could still be hard to convince leery Californians that the measure will do what it promises.

“Initiative campaigns often focus on the idea of unintended consequences,” he said. “To me, that’s what this is going to be all about. You’re going to hear that from both sides. And the voters will have to decide.”