Virus sends some filmgoers to drive-ins

Amid calls for social distancing, the venues see an uptick in business 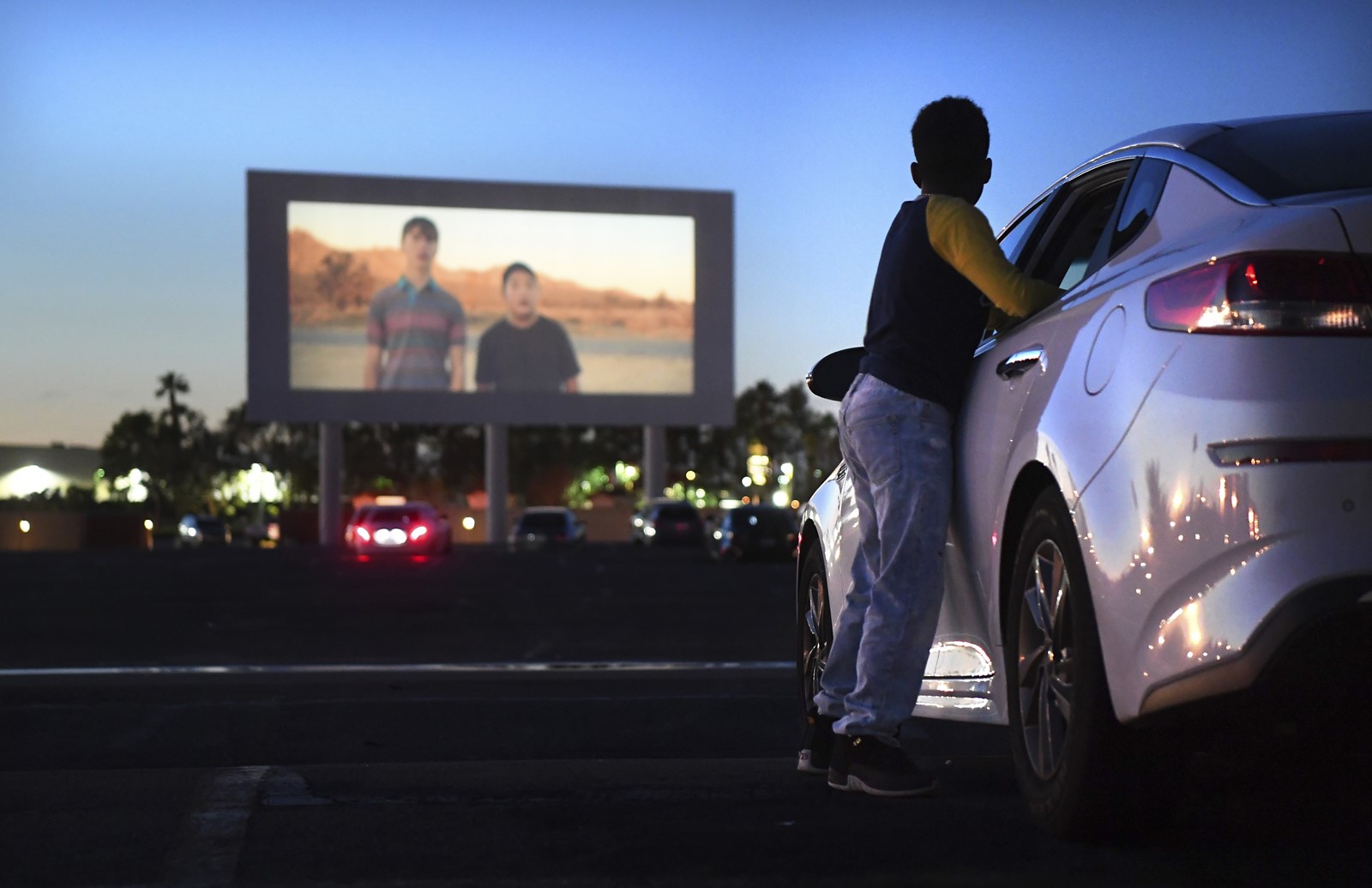 Brenna Coogle frequented the Paramount Drive-In as a child growing up in Lakewood but hadn’t been there in about 30 years.

On Tuesday night, however, she decided to visit it for a showing of Pixar Animation Studios’ “Onward” with her 9-year-old son and friends.

Moments before previews began, Coogle stood near her car under a darkening sky and considered how the coronavirus had upended daily life. She said the widening pandemic made her feel she couldn’t go most places — including a conventional movie theater — and she yearned for a distraction.

“So, Day Two of home school, we are all cooped up in the house, and this was a way to go out and still be distant from other people but not at our house,” Coogle said.

Drive-in theaters have long been viewed as an anachronistic diversion — perhaps worthy of an occasional visit, if that. Now, though, several among the country’s 305 drive-in theaters are experiencing a surge in interest as traditional movie theaters, theme parks and other entertainment options are forced to close because of governmental advisories designed to increase social distancing during the coronavirus outbreak.

In interviews with The Times, owners of drive-ins in California, Kansas, Oklahoma and Missouri said that they remain open, with several reporting increases in business in recent days. Operators said they were mindful of restrictions on large gatherings and would close if a mandate required them to do so.

Ticket sales Tuesday at the two-screen Paramount Drive-In were “at least double” what they typically would be, said Beau Bianchi, whose family has owned the business in Paramount since 1946. In all, the drive-in — which offered a double feature on both screens — welcomed 136 cars and sold 320 tickets. The family’s neighboring 11-screen indoor cineplex closed Sunday, but Bianchi said he expects business to continue to grow at the drive-in.

“It has been a welcome relief for families and adults looking for a little getaway from the house,” Bianchi said. “We’ve been trying to let people know that we have a safe environment and [offer] a little escape.”

But some operators temporarily closed their drive-ins this week because of the coronavirus outbreak; among those that shut down were the Family Drive-In Theatre in Stephens City, Va., and the West Wind Capitol Drive-In in San Jose.

“They are following local ordinances and/or made business decisions to do so,” said John Vincent, president of the United Drive-In Theatre Owners Assn., a nonprofit industry advocacy group. “The drive-ins that are doing well are in areas that have not been hit hard yet with the outbreak.”

As the coronavirus spreads, the Centers for Disease Control and Prevention have recommended that events involving 50-plus people not be held for the next eight weeks. And in situations where high-risk populations are involved, the organization has said gatherings of 10 or more people should be canceled. But some drive-in owners said they aren’t sure whether their theaters should be considered gathering places. Doug Mercille, owner of the Starlite Drive-In in Cadet, Mo., said it’s a “gray area.”

“I don’t think we fit into the gathering category personally because all the gathering places are places where you are confined with a bunch of people,” said Mercille, whose drive-in remains open. “At the drive-in, you’ve got to be in your own car.”

Owners who are keeping their facilities open said that seeing a movie at a drive-in can require little to no human contact, largely because patrons are, of course, confined to their cars during the showing. And some operators have taken steps to minimize interaction among people, including shutting down or limiting their concessions.

At Paramount Drive-In, it was possible Tuesday to take in a film without ever leaving the car: the only contact with the theater’s staff came when buying a ticket from a gloved worker at a drive-up kiosk. After that, another worker, who also wore gloves, examined tickets near the entrance to the parking area and explained that vehicles should not be positioned directly next to one another.

Christian Singleton, who brought his 4-year-old son and 2-year-old daughter to the “Onward” showing, said he appreciated those efforts.

“Nobody is near us, and we can actually enjoy the movie without feeling that paranoia where something like somebody coughing would have us instantly move,” Singleton said.

A spokesman for the city of Paramount said it has not ordered businesses to close and is instead following Los Angeles County guidelines. The county’s Public Health Department has said theaters, among other establishments, should close.

Not only does the drive-in model apparently offer systemic advantages over indoor theaters, but owners also appear to be benefiting from the sidelining of that competition. Major theater chains including AMC Theatres and Regal Cinemas have closed all of their U.S. locations, and smaller ones such as Alamo Drafthouse have followed suit, though some others remain open.

It’s a rare moment in the spotlight for the drive-in business, which has declined over the last two decades: As of October, the U.S. had 305 drive-in theaters with a total of 549 screens, down from 447 locations and 684 screens in 1999, according to the United Drive-In Theatre Owners Assn. At the industry’s peak in 1958, there were 4,063 drive-in screens across the country. These days, California is one of the biggest players in the space, with 44 screens; only Pennsylvania (45) and New York (49) have more.

Whether many of the drive-ins still operating amid the pandemic will be able to keep doing so in the days ahead remains an open question, in large part because of the rapidly changing nature of the nationwide response to the outbreak. New government restrictions are being rolled out daily, with some affecting drive-in operators. In Tulsa, Okla., for example, the Admiral Twin Drive-In won’t be open this weekend unless it can get an exemption from a new citywide order that all movie theaters close, owner Blake Smith said.

Smith said he is seeking clarification from the city about opening this weekend because his drive-in can operate “without folks getting out of their cars.” But he said it may take a few days to sort things out.

“The city is allowing fast-food drive-thru businesses to stay open,” he said. “I am making the case that we are similar to them.”

Meanwhile, another theater Smith owns, the Starlite Drive-In in Wichita, Kan., is scheduled to operate under its normal weekend hours. He said that both the Starlite and Admiral Twin were open last weekend and despite rainy and cold weather at both locations, business was pretty good.

Paramount Drive-In doesn’t appear to be the only Southland operation still welcoming customers: The City of Industry’s Vineland Drive-In said in a social media post March 16 that it would remain open, and the website for the Mission Tiki Drive-In Theatre in Montclair listed show times through March 21. Neither theater responded to interview requests.

Besides concerns about being shut down by authorities amid calls for stricter quarantines, some drive-in owners also worried about studios opting to distribute their films digitally ahead of schedule.

Universal Pictures on Monday said it would release movies at home the same day as their theatrical premiere, starting with “Trolls World Tour” on April 10. Universal films currently showing in theaters — including “The Invisible Man” and “The Hunt” — will also be available via on-demand platforms as soon as Friday. Such a move could keep would-be drive-in customers at home, some operators said.

“We do need Hollywood to release movies to the movie theaters — if they go day-and-date, that scares me,” Smith said.

Others were concerned that some movie studios’ recent decisions to pull new releases from the calendar — Walt Disney Studios, for example has delayed the opening of pictures including “Mulan” and “New Mutants” — would soon leave them with few desirable films to show.

“At this time we are playing what we have now, and we may have to reevaluate and maybe bring in some older family movies,” said Bianchi, whose Paramount Drive-In is showing “Bloodshot,” “The Invisible Man” and “Sonic the Hedgehog” in addition to “Onward.”

For now, though, drive-in owners are hoping for brisk business. And operators such as Mercille, whose family has owned his Starlite Drive-In since 1968, are reveling in a chance to provide an increasingly rare option for public entertainment during the pandemic.

In light of the outbreak, Mercille is working on some changes to concessions, including a system that would allow patrons to order food and refreshments via text message or phone and have them brought to their cars. And with better weather on the horizon — last weekend was rainy in Cadet, dampening business, Mercille said — he is planning for strong business.

“Where else are [people] going to go right now?” he said. “It’s nice to be able to open that outdoor environment where they still feel safe and can do stuff with family.”