a void in the local scene

Setbacks also lead to innovation, as a virtual play festival is created 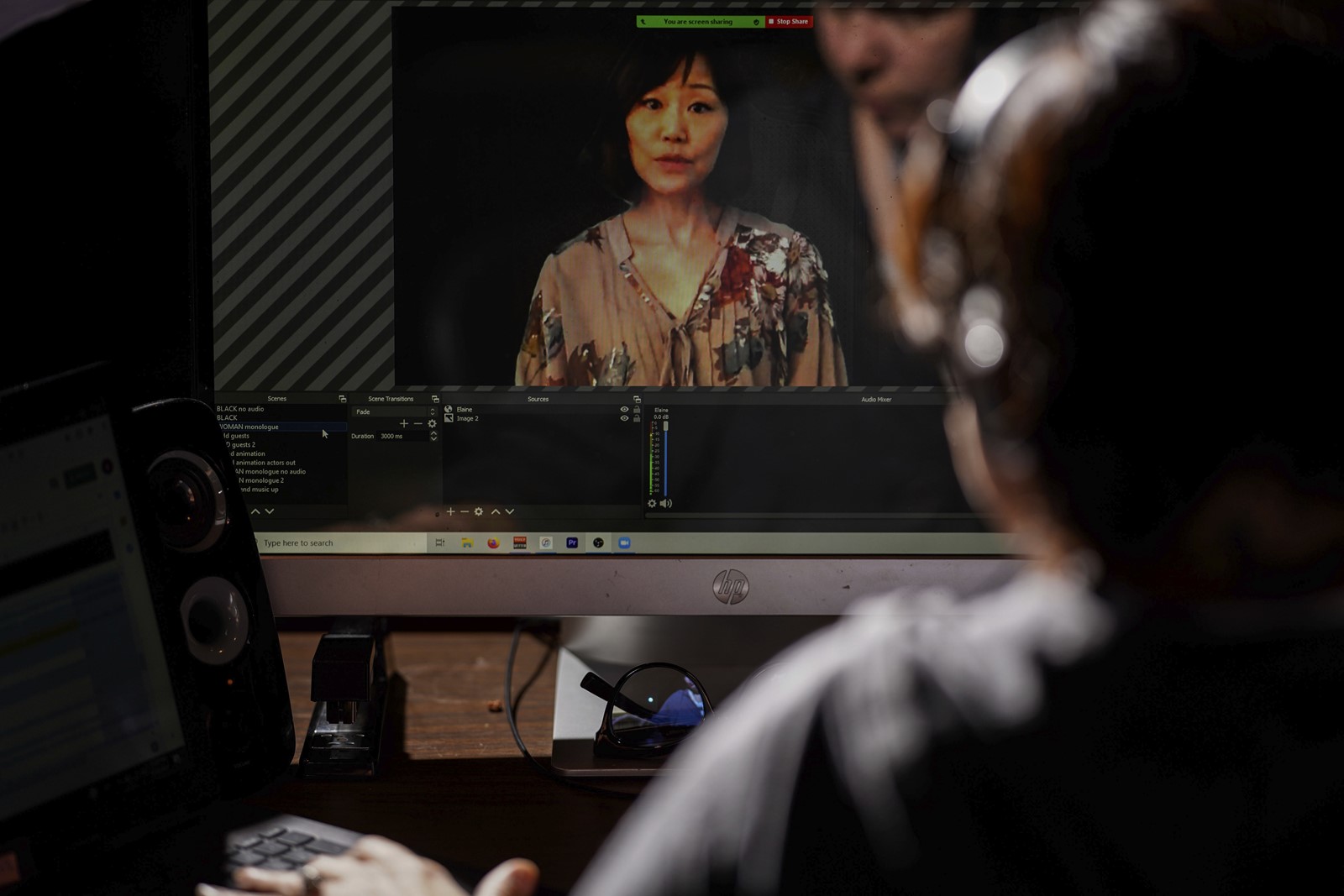 COVID-19 brought theater to a stop, but it also started something.

During the nearly seven months that Los Angeles’ live theaters have been shut, leaders of small companies have been gathering weekly online to air worries and share information. The mandatory closure seemed staggering at first, but members of this rambunctious group — who operate mostly in venues with fewer than 100 seats — have commiserated, argued and laughed as they dug for answers and brainstormed.

Along the way, they came up with a name meant to identify not only their group but their place within the city’s arts scene: Alternative Theatre Los Angeles.

The group’s first public activity is an online festival of 10-minute plays that begins Thursday and continues through Oct. 17. Called Together L.A., the event — which captures performances from actors’ homes and composites them through new technology — sends the message that not only is theater still being made, but it continues to innovate.

Or, as Gregg T. DanielLower Depth Theatre, one of the group’s members, enthusiastically put it: “This pandemic is not going to overwhelm Los Angeles theater.”

With its collection of artistic directors from 64 theaters, ATLA is a pileup of Type A personalities, Daniel cheerfully admitted. But they are a resilient bunch, emphasized the leader of , which performs Black plays from around the world.

“There’s a lot on everybody’s plates,” said Maria Gobetti of the Victory Theatre, “but it’s really wonderful to be part of ATLA and to have a community with a lot of resources. Everybody has different strengths, and they’re willing to share information.”

Tom Ormeny, her husband and co-artistic director in the 40-year-old theater, added: “The older and the younger generations get to work together and to see each other and to know what the concerns are.”

“We get the benefit of their progressive ideas,” Gobetti said — “and their energy,” Ormeny added.

The longest-established theaters in the group are Company of Angels, at 61, Theatre West, 58, and the Odyssey, 51. Youngsters include Coin & Ghost, which is 3, and Collaborative Artists Bloc, 2. In between are such groups as the Victory, Celebration, Actors Co-op, Fountain, Antaeus, Playwrights’ Arena, Macha, Towne Street, Robey, Echo, Independent Shakespeare Company, Boston Court, Rogue Machine, Ammu- nition, Élan and After Hours. Also in the mix are the midsize Latino Theater Com- pany and Native Voices.

The group’s instigator was Gary Grossman, producing artistic director of Skylight Theatre, which is a leader in play development. Facing an information void in mid-March when the city suddenly shut down, he rallied about a dozen and a half artistic directors already bonded through a longstanding poker group/kvetch session, as well as fellow members of Independent Theatres of Los Angeles, formed a few years ago after the Actors’ Equity union changed the wage rules on which 2½ decades of L.A.’s small, nonprofit professional productions had relied.

After the first internet meet-up on March 24, word quickly spread, and more artistic directors came aboard.

As prospects for a full reopening stretched to months, then — possibly — years, participants found themselves continually reevaluating how they would keep their companies going. “All of these theaters have always saved for a rainy day; they’ve watched their pockets,” Grossman said. “Well, we’re not in a rainy day, we’re in a monsoon, and none of us are prepared for that. A lot of these are mom-and-pop organizations. How do we keep them alive?”

The pandemic piled atop an already gigantic mound of challenges: rising rents; the Actors’ Equity change; and the newly instituted Assembly Bill 5, which regards much of the gig work done in the state as employment subject to rights and benefits — making it much more costly to theaters and other performing arts organizations. A spring and summer of social justice action across the U.S. has demanded response as well.

So ATLA’s top initiatives include:

• studying COVID safety protocols and their costs, and working with the theatrical unions to compile a list of best practices to present to the county and the state to convince officials that, with the right precautions, live performances could resume before a vaccine is widely available

• rallying artists affected by AB 5 and pressing legislators for a carve-out for nonprofit theaters with revenue of $1.5 million or less

• immersion in technology, spurred by festival preparation, that is applicable to all online programming, currently the best way of connecting with audiences

• fostering opportunities for artists of color by formulating a regional, small-theater action plan; compiling a spreadsheet of BIPOC (Black, Indigenous, people of color) artists that theaters can refer to when assembling production teams; and developing equity, diversity and inclusion (EDI) training

BIPOC members of ATLA, including the LGBTQ Celebration Theatre’s artistic director, Michael A. Shepperd, are pressing their colleagues to commit to diversifying their theaters, from programming and artists all the way through to their boards of directors.

“There’s absolutely a long way to go,” Shepperd said. “If you have been creating the same way for 30, 40, 50 years, and all of a sudden something new is presented, there is going to be pushback, because people feel that by adding BIPOC into this conversation, they’re being pushed to the side.”

Oanh Nguyen of Chance Theater, who facilitates ATLA’s EDI committee, said: “The power of live theater is the ability to gather our community in the same room and, through a myriad of ways, reflect our lives back to us. Having more BIPOC artists in all areas of theater-making helps ensure that reflection includes all of us, especially when you consider the makeup of Southern California.

“There is so much to be gained from walking in the shoes of people who look different than you.”

“I believe people want to change,” Shepperd said of his ATLA colleagues, “but a lot of them just don’t know how to start.”

Much of the committee’s work is in its early stages, Nguyen said, “but I do believe the needle can be moved.”

Meanwhile, there is the online festival, a massive undertaking. Thirty-four theaters are presenting plays that sweep through comedy, drama and the surreal. L.A.’s shutdown has kept actors, directors and other personnel at home, rehearsing through their computer screens, but the technology they’re using seems to put performers in the same room. During recording sessions that have been underway for three weeks, camera feeds from the actors’ laptops and cellphones, as well as their individual audio relays, are being crafted into filmlike composites, with actors appearing in the same frame rather than in the cut-up checkerboard that has so far dominated Zoom theatrical presentations.

It took a pandemic, but theaters are now working together in a way that many ATLA members had long hoped for.

“Los Angeles is spread out over a bajillion miles,” Shepperd said. “A lot of us didn’t know each other,” especially across generations, older theaters and fledglings.

Weekly general meetings are the group’s main information exchange. Research and action items flow in from four committees. Additional information and resources are provided by the arts service organization L.A. Stage Alliance and the Theatrical Producers League of Los Angeles. Member company After Hours has made sure festival participants have the equipment they need.

With no formal leadership or budget, ATLA is jury-rigged for the moment. Will it last beyond the pandemic?

Meanwhile, he said, “it’s making lemonade out of lemons. We have the downtime now. So why don’t we be constructive; why don’t we really look into all of these areas — how can we be a better community?”

Free, but donations to ColorofChange.org are encouraged

Must reserve at TogetherLAFestival.com to receive a viewing link. Programs can be viewed for 14 days after they air.