In new border crackdown, all migrants to be charged

Jeff Sessions says the new policy also means children are more likely to be separated from their parents. 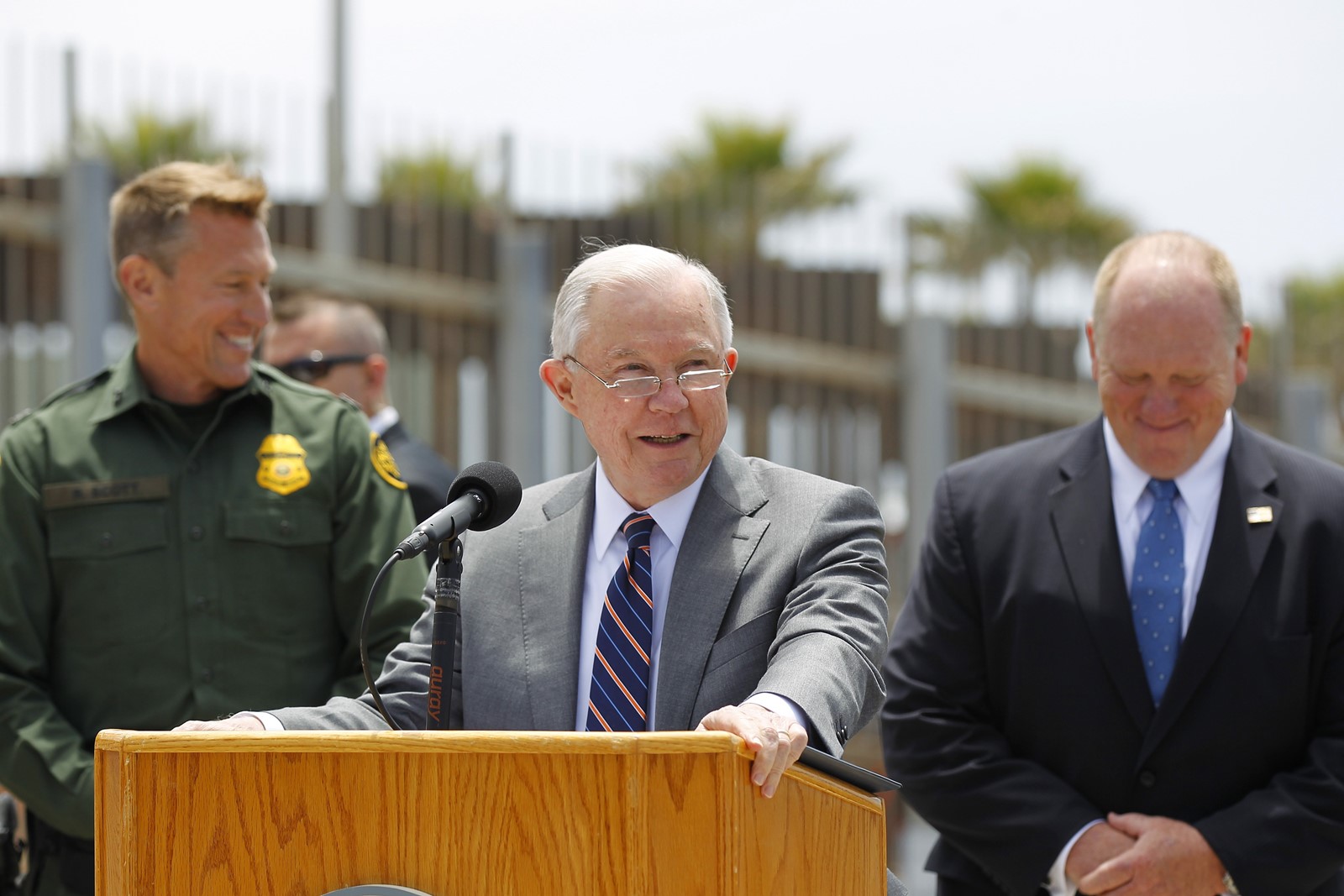 “WE CANNOT TAKE everyone on this planet who is in a difficult situation,” Atty. Gen. Jeff Sessions said at Border Field State Park, which straddles the U.S.-Mexico border near Imperial Beach in San Diego County. (K.C. Alfred San Diego Union-Tribune)
PREVIOUS IMAGE

All immigrants who cross the border illegally will be charged with a crime under a new “zero tolerance” border enforcement policy, Atty. Gen. Jeff Sessions said Monday, launching a crackdown that could overwhelm already-clogged detention facilities and immigration courts with hundreds of thousands of new cases.

Sessions also said that families who illegally cross the border may be separated after their arrest, with children sent to juvenile shelters while their parents go to adult detention facilities. Until now, border agents tried to keep parents and their children at the same detention site.

The new policy is expected to send a flood of deportation cases — and legal challenges — into federal courts. It also could put thousands more immigrants in detention facilities and children in shelters, and is likely to strain an immigration system that has struggled to keep up with a surge in enforcement under President Trump.

Until now, individuals apprehended while crossing illegally were often simply bused back over the border without charges. That was especially common for people without criminal records or previous immigration violations.

“This border is not open. Don’t come unlawfully…. Make your claim. Wait your turn,” Sessions said Monday, speaking to reporters at Border Field State Park, which straddles the U.S.-Mexico border near Imperial Beach in San Diego County. “We cannot take everyone on this planet who is in a difficult situation.”

“If you are smuggling a child, then we will prosecute you and that child will be separated from you as required by law,” Sessions said earlier Monday in Scottsdale, Ariz. “If you don’t like that, then don’t smuggle children over our border.”

Families seeking asylum and presenting themselves at official U.S. border crossings will be allowed to stay together as they seek protected status, according to a U.S. official familiar with the new policy.

But asylum seekers caught crossing illegally will be charged with a crime and their children sent to refugee shelters, even as agents conduct the legally required interview to evaluate their asylum claims.

Sessions said that no blanket policy would mandate separating all parents from their children, but acknowledged that such cases would increase under the new rules.

“We don’t want to separate families, but we don’t want families to enter the border illegally,” Sessions said. “We urge them not to do so.”

Mexican country music could be heard from the southern side of the border as Sessions made the argument for a no-tolerance approach to border crossers.

He spoke near a spot called Friendship Park, dedicated by then-First Lady Pat Nixon in 1971. Back then she stepped across the barbed-wire barrier marking the U.S.-Mexico border, embraced Mexican children and declared, “I hope there won’t be a fence here too long.”

Immigration activists denounced the new policy to separate parents from children, and said they expected to see it challenged in court. Past court decisions have put severe restrictions on the government’s ability to detain children for immigration violations.

“It’s clear this administration wants to use families who are fleeing violence as a pawn in a larger strategy to end immigration to the U.S.,” said Ali Noorani, executive director of the National Immigration Forum, an advocacy group.

“They’re making a decision any parents would make in rescuing their kids,” he said. “For this administration to say, ‘We will then separate you from your child,’ is morally corrupt.”

The stepped-up enforcement comes during a documented shift in immigration patterns, with fewer Mexicans crossing the border to find work in the United States and an uptick in children and families fleeing violence in Central American countries and asking for U.S. asylum.

The Trump administration has called for a change in federal immigration law to close what it terms “loopholes” that allow people who file asylum claims to be released while waiting, sometimes years, for their cases to be heard in the nation’s overloaded immigration courts.

For now, the latest iteration in immigration processing will have a dramatic effect on Border Patrol operations and potentially require major new funding from Congress.

So far this fiscal year, Border Patrol officers have detained about 288,000 people. But only about 30,000 of those were charged with a crime for crossing the border, and about 12,000 were charged with the more serious crime of reentry, which is a felony. The rest were sent back across the border.

Likewise, the administration is trying to push asylum seekers away from dangerous border crossings in the desert and along the Rio Grande and to authorized ports of entry where they can be processed.

But many border stations are ill-equipped to take care of a surge of new cases, said Doris Meissner, senior fellow at the Migration Policy Institute and former commissioner of the Immigration and Naturalization Service.

“They are strongly incentivizing serious bottlenecks at the ports of entry, and maybe they’re doing that on purpose,” she said.

Meissner called the new policy an “overreaction,” and said the administration is using a blunt-force prosecution approach to address complicated problems in the asylum system.

The White House has sent National Guard troops to the border, sought a huge surge of Border Patrol officers, and pushed Congress — so far unsuccessfully — to appropriate billions of dollars to build a wall across most of the Southwest border.

The number of border apprehensions more than tripled in March and April, to 101,220, compared with the same two months last year. But the total is generally comparable to recent years and still below the surge of minors that overwhelmed the system in 2013, and far below the levels seen in the 1990s or early 2000s.

The Trump administration is convinced that detaining more border crossers will serve as an effective deterrent. When agents in El Paso started apprehending more families in 2017, the number of illegal crossings dropped by 64%, a Homeland Security Department official said.

But this kind of high-intensity prosecution approach has been tried before. Since 2005, some U.S. attorney offices in districts near the border have filed charges en masse against all border crossers.

The strategy, called Operation Streamline, started in the George W. Bush administration, and immigration authorities have defended it as an effective deterrent.

Judges and immigrant advocates have criticized the program for straining court resources and short-circuiting immigrants’ legal protections, while internal watchdogs have questioned whether there is any evidence that the approach is an effective use of resources.

The Justice Department last week announced plans to send 35 additional prosecutors to Texas, California, Arizona and New Mexico to help handle the expected surge, along with reassigning 18 immigration judges to speed the progress of asylum claims.

The Department of Health and Human Services, which handles the shelters for migrant children, also is preparing to take in many more cases.

The administration’s unhappiness with the current system was reinforced when a caravan of more than 200 asylum seekers from Central America traveled through Mexico and arrived in Tijuana on April 29, drawing angry tweets from President Trump.

All the people from the caravan were allowed to enter the United States to seek asylum, as the law requires. Despite the caravan’s role as a rhetorical foil for Trump, it would not have been affected by the administration’s new policy because the migrants in the group entered at an approved port of entry.

Sessions has frequently made a target of California, with its immigrant-friendly policies on “sanctuary” cities.

Soon after he started speaking, Sessions was interrupted by a lone protester, Will Johnson of San Diego, who yelled, “We don’t want you in our state.”

He was answered by Thomas Homan, the acting director of Immigration and Customs Enforcement, who said the Trump administration was simply enforcing the law.

“I usually don’t address hecklers but I will address this one,” he said. “If people, like the heckler, don’t like what we do, call your congressman to change the law.”