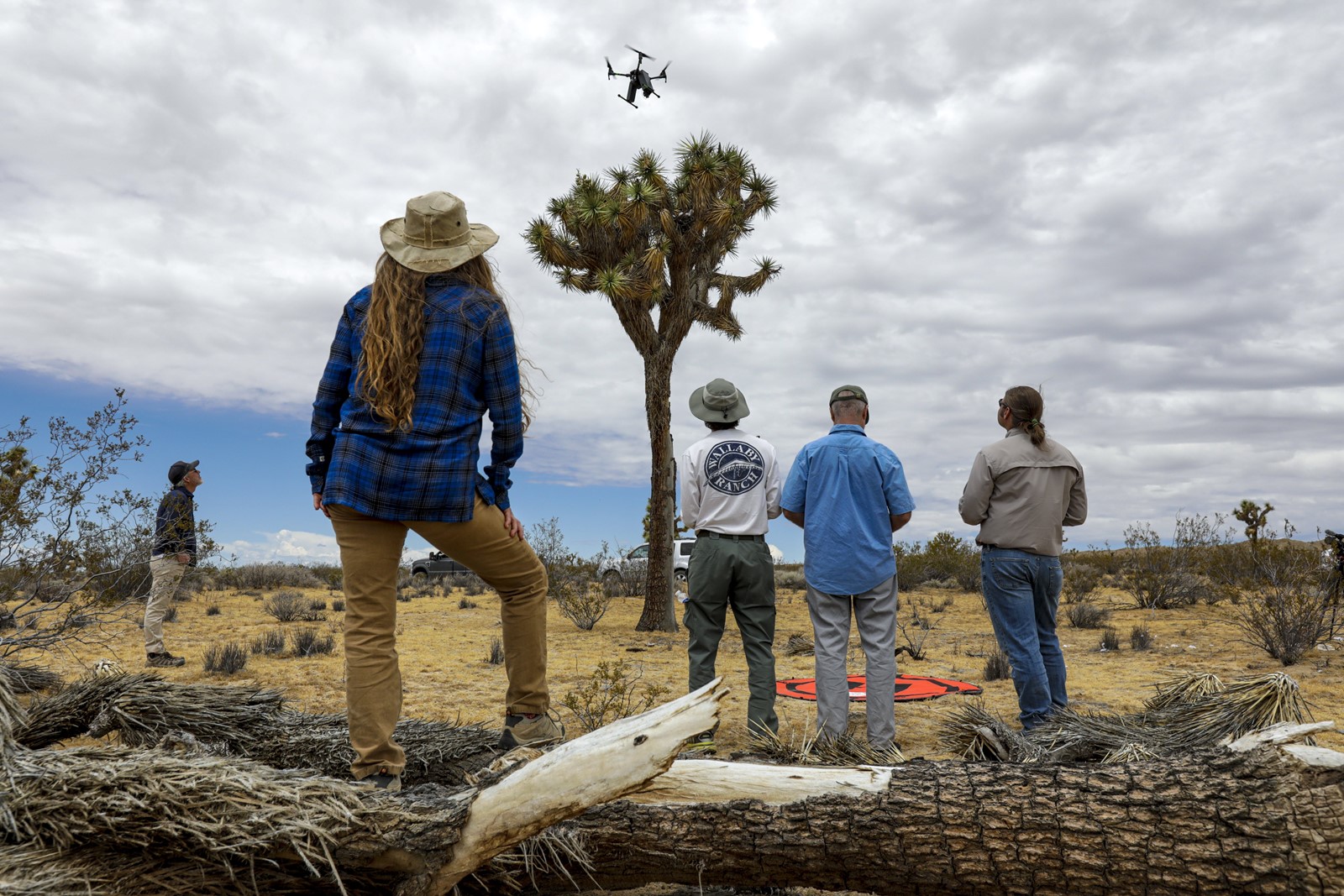 BIOLOGISTS show how a drone can squirt oil onto the eggs in a raven’s nest, suffocating the embryos. (Irfan Khan Los Angeles Times)
PREVIOUS IMAGE

The sun was rising over the Mojave Desert as crews prepared to demonstrate a devastating new weapon in the war among man, bird and reptile.

Standing on a windswept plain, a group of government and utility officials locked their eyes on a drone as it hovered beside a twisted Joshua tree. As the buzzing contraption drew closer to a nest of twigs and furniture stuffing, a controller’s voice cut through the cool morning air.

Instantly, the quadcopter squirted streams of silicone oil into the unoccupied raven’s nest, thoroughly coating a clutch of simulated eggs.

Though the attack may have lacked the shock and awe of a Hellfire missile strike, it would have proved lethal to actual raven eggs. The layering of oil would have prevented oxygen from permeating the shells, slowly suffocating the embryos within.

After confirming the direct hit via a video feed, the drone’s controllers summoned it back to the desert floor, where biologist Tim Shields gave a nod.

“The ravens that built this nest wanted to have kids and grandkids,” he said.

The population of the common raven is exploding across the American West, where it thrives on human refuse and roadkill.

As the large, strutting predators piggyback on the spread of human civilization, they are expanding into territories where they have never been seen in such large numbers. This expansion has come at the expense of several threatened species, including the desert tortoise, whose soft-shelled hatchlings and juveniles have been devoured by the birds.

Even tortoises up to 10 years old have shells that are too thin to withstand the hammering of a raven’s beak.

Numerous carcasses, looking much like helmets punctured by armor-piercing bullets, have been found beneath raven nests.

In one such instance, researchers counted 250 juvenile tortoise carcasses under a single nest over a four-year period, according to federal wildlife officials.

Shields, a conservation consultant who helped develop the drone, said the device isn’t intended to wipe out ravens. Instead, it would persuade them to “move out, allowing juvenile tortoises to grow up.”

Not everyone is convinced, however.

Peter Coates, a biologist with the U.S. Geological Survey, withheld a full endorsement of the device after watching the recent demonstration. He said additional field tests were needed.

“Egg-oiling with drone technology has some potential to be a very valuable tool,” he said.

So far, human efforts to defend the desert tortoise from aerial attacks and create “no-fly zones” over the arid Southern California landscape have met with little success.

Wildlife officials have tried shooting, poisoning and trapping ravens — methods that come with a potential backlash from animal advocates and the risk of allowing surviving ravens to teach others how to avoid human culling strategies.

Likewise, power company workers and municipal crews have conducted search-and-destroy missions for nests built on transmission towers, telephone poles and billboards, only to see other ravens take their place.

Even the U.S. military, which is bound to protect tortoises on its sprawling desert bases, has attempted to repel ravens with green laser rifles. Unfortunately, the nonlethal devices have annoyed humans just as much as birds.

Other options now on the drawing board include “techno-tortoises”: realistic replicas of baby tortoises that, when pecked or bitten, emit irritants derived from grape juice concentrates, a chemical compound already used to keep birds from congregating on agricultural fields and commercial centers.

But these efforts have had little effect on , an aggressive and extraordinarily clever species. Attracted by the scent of garbage, they have one of the broadest diets in the avian world and will try to eat almost anything that will fit in their beaks, as well as things that won’t if they can be torn apart into bite-size chunks.

The havoc caused by the ravens is not apparent to the casual observer. But it is obvious to biologists when, in the spring, fewer tortoises emerge from burrows to mate and fatten up on fruit and flowers.

Since 1990, the number of desert tortoises in the western Mojave has plummeted more than 90%. The reasons are numerous and include disease, vehicle strikes, mining, development and the construction of solar farms and wind facilities. However, predation by ravens has complicated matters by targeting the youngest generation of tortoises.

Research biologist Mercy Vaughn, who partnered with Shields to develop the egg-oiling drone, winced as she recalled how plentiful tortoises once were in the Mojave.

“Surveys conducted in 1994 turned up 250 tortoises per square mile in some areas,” she said. “Now, there’s maybe one or two.”

Four years ago, Vaughn and Shields began to experiment with egg oiling, a long-established, relatively humane method for reducing reproductive output of ground-nesting birds such as Canada geese, which damage lawns, and double-crested cormorants, which compete with trawlers for fish.

In those cases, the process involves removing fertilized eggs from a nest by hand, coating them with corn oil, then placing them back in the nest.

They also began studying raven nesting behavior to determine the ideal time to treat a full clutch of as many as five raven eggs.

Mated pairs of ravens typically travel long distances, visiting existing nests or potential sites to build new ones. The female begins to sit on a nest a few days before laying her clutch. After producing eggs, she sits on the nest for up to 28 days. One or both parents stay in the nest to protect hatchlings, which grow to nearly adult size within several weeks.

The research team decided that the most effective and humane time to oil raven eggs is during their embryos’ second trimester. That’s because the further along the embryos are, the more likely adult ravens are to stay sitting on the eggs.

“If ravens figure out earlier than that their eggs are rotten, they are likely to eat them and nest someplace else,” Vaughn said. “If we wait longer than that to treat their eggs, chances are that we’ll have a baby raven in the nest.”

Although the U.S. Fish and Wildlife Service does not require a permit to oil the eggs of Canada geese, oiling raven eggs with an experimental technology in federally designated wildlife habitat is strictly prohibited, except for special research purposes.

“We’re operating with scientific collecting permits,” Vaughn said, “which are not easy to get.”

Over the last two months, a team of biologists, computer experts and certified drone operators led by Vaughn and Shields has oiled 525 raven eggs in 116 nests within public lands designated as critical habitat for desert tortoises.

With raven populations growing at a rate of 2.5% a year, they have their work cut out for them.

In a prepared statement, Audubon California declined to comment on the drone. But it acknowledged that the success of ravens “can come at the expense of other birds and wildlife.”

“This is particularly unfortunate,” the organization said, “when the species in question are already at risk due to factors such as habitat loss, disturbance or climate change.”

John Griffin, senior director of wildlife protection at the Humane Society of the United States, said his organization supports the use of oiling methods for wildlife management, “but only when such control is justified and part of a comprehensive approach that considers and addresses all of the other factors.”

As the inter-species battle continues, Shields said he is compiling “an address book” of raven nests in the Mojave Desert.

Of particular concern are massive nests, such as one perched about 200 feet above the ground in the scaffolding of a transmission tower owned by the Los Angeles Department of Water and Power, roughly four miles northwest of Barstow.

Getting the research team’s caravan of four-wheel-drive vehicles to that remote location required picking routes carefully around rocks, potholes and tortoises along 10 miles of washboard dirt road.

En route, the group stopped and piled out for a closer look at an adult tortoise with gashes and tooth marks on the front edge of its scuffed carapace.

Wearing rubber gloves, Kerry Holcomb, a biologist with the U.S. Fish and Wildlife Service, moved him to safer ground in the shade of a creosote bush.

“It’s a male making the rounds at the end of the spring mating season,” Holcomb said.

Meanwhile, high above man and tortoise, a pair of ravens croaked and wheeled in a cloudless sky.