How a city disbanded police

Camden, N.J., set example for Minneapolis and other cities 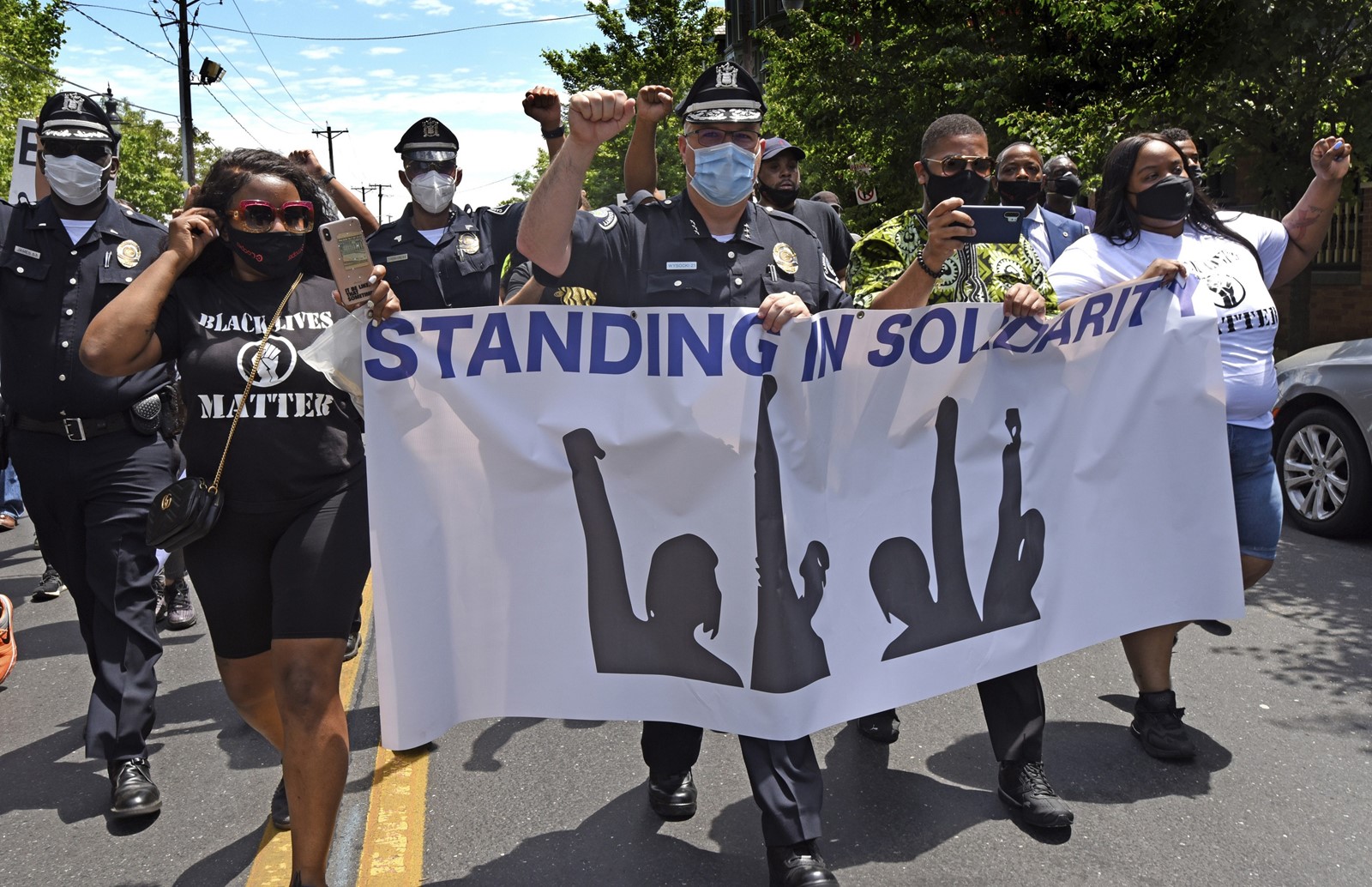 When Gabe Rodriguez started as a rookie cop in this impoverished New Jersey city nearly two decades ago, his training officer gave him a tip. If a comrade radios for backup, just park your patrol car in a vacant lot and let someone else handle it.

The police had given up trying to control Camden’s rampant violent crime. So seven years ago the state gave up on the city’s police. Officials took the unprecedented step of disbanding the department and starting over. The old logo came off police headquarters and a new one went up in its place.

“They hit the reset button,” said Rodriguez, 37, a lieutenant in the new force.

The overhaul marked a turning point for Camden, a city of 74,000 across the Delaware River from Philadelphia. Its revamped police force is cited as a potential model for Minneapolis — where a white officer’s killing of George Floyd, a Black man, has sparked nationwide protests — and scores of other communities seeking to reform police practices.

“Where you see Camden today is where I’d like to see police departments be in the future,” said Anne Milgram, a former New Jersey attorney general who worked with Camden’s police. “Hopefully that’s the direction Minneapolis is headed.”

Camden does not fit neatly into the national narrative since Floyd’s death. For starters, the transformation here was sparked by corruption and soaring crime, not a shocking video of police brutality.

Local and state leaders wanted not to defund the police, but to put more cops on the streets of Camden, long one of the country’s most dangerous cities.

But Camden still offers lessons for Minneapolis, where a majority of City Council members have vowed to disband the police force to pursue “community-based public safety” — and for other cities rethinking what policing should look like.

The new Camden police force is run by the county, not the city, and some residents complain they don’t have a voice in its operation. Nor does the new force reflect the community — roughly half the officers are white while the city is more than 90% nonwhite.

But Camden also has achieved positive results with some changes that activists and lawmakers are demanding in Washington and in many states.

Officers are trained to deescalate situations, and they’re required to use force only as a last resort. Chokeholds are considered deadly force rather than a restraint. Officers have a duty to intervene if they see another officer use excessive force.

Members of the force are encouraged to develop relationships with residents, such as holding barbecues or simply knocking on doors to say hello, rather than showing up only in moments of crisis.

As elsewhere in the country, the crime rate has dropped over the last decade. But violent crime in Camden fell a whopping 42% between 2012 and 2019, according to county figures, as police focused less on clearing corners of drug dealers or writing tickets that can saddle poor residents with bills they can never pay.

“We’re doing the right thing now,” said Brian Truitt, 53, who runs a downtown restaurant and catering business. “As a whole, I feel like the city is coming back.”

A sign of the progress — and the challenge ahead — came after Floyd’s killing on May 25, when Yolanda Deaver, 36, decided to organize a march from her hair salon to police headquarters.

“I just had this feeling in my heart that I needed to do something,” she said. “I’m a mom raising Black boys. I’m a partner to my fiancé. And that could have easily been them.”

On May 30, the day of the march, Police Chief Joseph Wysocki, who is white, pulled up in a black SUV and asked whether he could participate.

Someone had suggested Deaver hold a banner emblazoned “Standing in Solidarity.” She turned to Wysocki and said, “Hey chief, you want to help handle this banner?”

He did, raising his fist to declare “Black Lives Matter” along with several hundred peaceful protesters.

A picture of Wysocki marching alongside activists ricocheted around the internet, a dramatic shift from the confrontations and violence in some cities. It was also a relief for Camden, which was devastated by rioting sparked by police brutality in 1969 and 1971.

Not everyone welcomed Wysocki, especially since the march started on a blighted commercial stretch bracketed by illicit drug markets.

“They don’t patrol that area well. Not at all,” said Ronsha Dickerson, 43, a national organizer for Journey for Justice Alliance, an activist group. She wants a civilian review board to increase oversight of the department.

The city has spent years as a ward of the state. The New Jersey attorney general’s office took over the Police Department in 2005, and the state installed Scott Thomson as chief in 2008.

“There was an overwhelming amount of apathy and lethargy,” said Thomson, who had started as a beat cop in Camden. “It was a broken organization.”

But he said reforms were blocked by a union contract that paired generous pay with restrictions on how officers could be deployed.

In 2011, nearly half the force was laid off as the state cut funding due to the Great Recession. The next year, Camden notched a record 67 homicides.

The crisis hit at a singular political moment. Chris Christie, New Jersey’s Republican governor, had forged an alliance with moderate Democrats in the Camden area — none of whom were allies of public sector labor. Facing an outcry to get crime under control, they seized the opportunity to sweep away the department and the union that represented the officers.

“There was bipartisan union busting,” said Eugene O’Donnell, a professor at the John Jay College of Criminal Justice in New York.

About three-quarters of the old force were rehired to the new one, and Thomson remained in charge. The department now has nearly 400 officers — more than before.

But the strategy changed, with a renewed emphasis on internal accountability and analyzing data. More officers were assigned to patrol on foot rather than in cars. Thomson sought to find a balance between a reassuring police presence and an oppressive one.

Some residents found the changes unnerving at first.

“There were a ton more young white officers watching you,” said Nyeema Watson, the associate chancellor for civic engagement at Rutgers University in Camden. “You’re seeing them on every corner.”

Enough progress was made that President Obama touted Camden as an example of reform after protests in Ferguson, Mo., ignited a national conversation about policing in 2014, and he visited the following year.

Thomson later reached out to Alex Shalom, an attorney with the American Civil Liberties Union in New Jersey, to ask for advice on a new use-of-force policy.

The two had met years earlier when Shalom was deposing Thomson for a lawsuit involving five Camden cops accused of planting evidence, a scandal that forced prosecutors to drop scores of cases.

The policy they crafted was hailed as a milestone, particularly the requirement for police to intervene if they see another officer use excessive force. The idea has gained wide attention since Floyd’s death, when multiple officers stood by while a colleague pinned Floyd to the ground with his knee on neck for nearly nine minutes.

“We knew about the ‘blue walls of silence,’ ” Shalom said. “This was identifying that phenomenon and working against it.”

Thomson retired last year, but Wysocki has a similar unconventional approach to policing.

On Monday evening, officers set up barbecue grills around the city, handing out hot dogs and tossing footballs with the department logo.

At one of the events, residents sat on stoops and front porches as the setting sun cast shadows across cracked streets. Stray gunshots remain a concern, but not on this night with police nearby. Giggling children chased each other around a rusted abandoned car.

“When you see kids playing, you know you’re doing something right,” Rodriguez said.