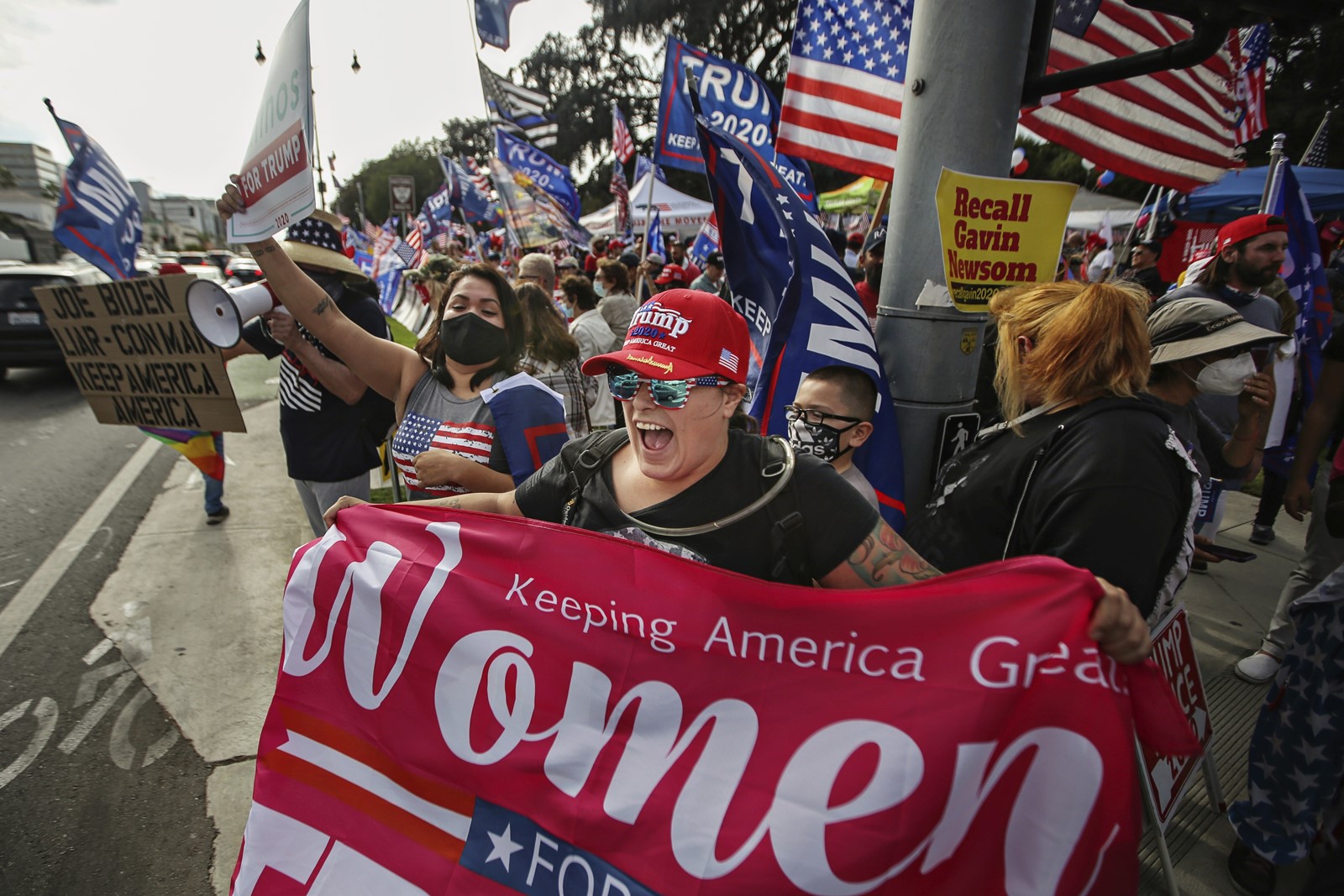 A TRUMP supporter waves a Women for Trump flag at a rally in Beverly Hills in October. Gov. Gavin Newsom’s critics say his strict COVID-19 pandemic policies were a leading factor in the effort to recall him. (Jason Armond Los Angeles Times)
PREVIOUS IMAGE

Recall backers have gathered more than 1.6 million valid voter signatures, enough to place a proposed ouster of Gov. Gavin Newsom on the ballot. For the second time in California’s history, voters will decide if a sitting governor should be removed before a regularly scheduled election.

A Times analysis of data released by Secretary of State Shirley N. Weber shows where support was the strongest. Though petitions were signed all across the state, the highest concentrations of signatures were found in the rural northeast, areas with low coronavirus case counts and where voters heavily favored former President Trump.

The Times analysis studied the 1,626,042 voter signatures verified by local election officials and reported Monday by the secretary of state’s office. Not included are about 400,575 signatures that officials rejected.

Though the threshold to trigger the recall has already been passed, roughly 149,571 signatures still must be processed and have not yet been analyzed. Before the recall can be certified by Weber, triggering action by Lt. Gov. Eleni Kounalakis to call an election within 60 to 80 days, voters who signed the petitions will be given time to withdraw their signatures and state officials will determine the cost to conduct the election, steps that could take up to three months to complete.

The data show the continued influence of Republican voters in California politics despite the grip Democrats have on all statewide offices and the Legislature.

Newsom’s critics say his strict COVID-19 pandemic policies were a leading factor in the effort to recall the governor, arguing that these restrictions cost thousands of jobs and shuttered businesses.

The Times found, however, that coronavirus caseloads alone were not enough to predict which areas would provide the most signatures.

Many Republican-leaning counties that favored the recall had low case rates. But counties with predominantly Democratic voters that experienced similar caseloads, such as those in the Bay Area, were less supportive of the effort.

Among the areas most supportive of recalling Newsom were rural, right-leaning counties to the north and east of Sacramento.

Those areas had high signature rates and low case rates, with the exception of Lassen County, where a surge in cases hit several state prisons.

Those counties also voted to reelect Trump in 2020.

These areas are home to 5% of the state’s population but more than 10% of the total signatures gathered.

Still, the massive effort to force a recall relied largely on the state’s densely populated urban centers where Democrats win most elections. Los Angeles County, home to one-quarter of the state’s population, provided 264,409 signatures, or 16% of the total so far.

Election officials don’t release the addresses of voters who sign petitions, preventing a more detailed analysis to determine which areas within each county provided the most support.

Regardless, the results show that support for the recall is not isolated to any one corner of the state, as does a recent public opinion poll showing that 40% of voters supported recalling Newsom.

The question will be settled later this year at the ballot box. To remove Newsom from office, more than 50% of voters will need to cast their ballot in favor of the recall.