Domes are full of hot air

The techno theme park tries to break new ground but feels like so many retreads.

THE EXPERIENCE just might entertain you, but the technology impresses more than the content itself. (Photographs by Luis Sinco Los Angeles Times) 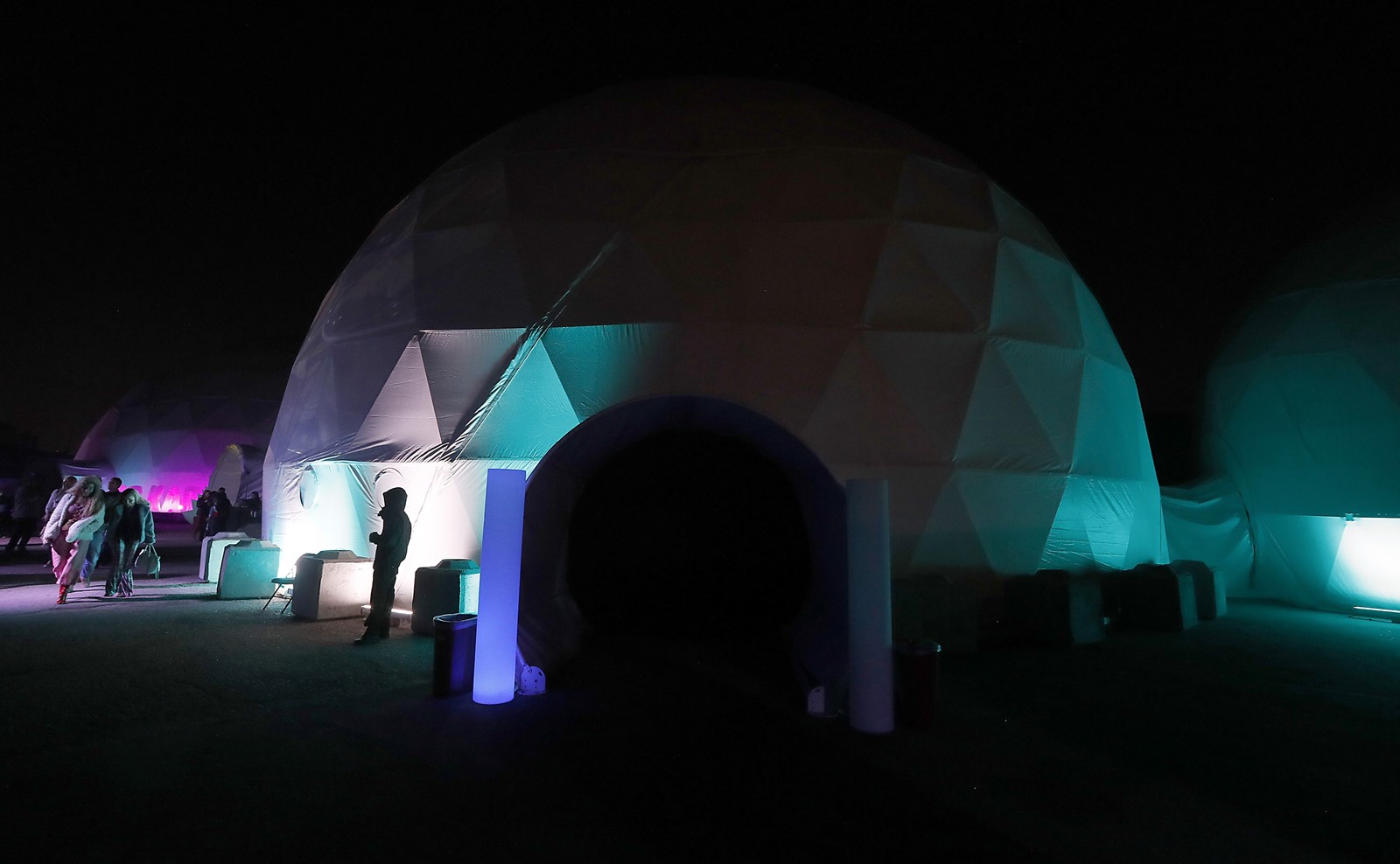 IN WISDOME L.A., the displays include projections and live performances. ()
PREVIOUS IMAGE

A new brand of pop-up “art” experience has emerged in the last few years, the crowd-pleasing spectacles rising in converted industrial buildings and vacant lots across the country. These range from vapid selfie factories like the Museum of Ice Cream and Candytopia, where visitors can snap pictures of themselves in front of brightly colored backdrops and tableaux, to more impressive, interactive environments such as “House of the Eternal Return,” created by Santa Fe art collective Meow Wolf.

These examples of Big Fun Art — as Ben Davis coined the phenomenon on Artnet — share more in common with theme parks than with traditional museums, aiming to place the visitor at the center of the experience.

Located in downtown L.A.’s Arts District, the site features five domes equipped with 360-degree projection mapping technology, akin to a planetarium. The opening installation showcases the work of Android Jones, a Colorado “digital painter” who calls himself an “electro-mineralist” and is a “longtime member of the Burning Man community,” that annual counterculture festival in the Nevada desert chock- full of big, fun art.

Visitors enter through a mirrored chamber resembling a poor man’s version of Yayoi Kusama’s Infinity Mirror Rooms, which have become popular selfie spots at blue-chip institutions such as the Broad. Given this amateurish installation, one appreciates Kusama's works all the more.

An entire dome is given over to dozens of Jones’ digitally printed canvases, presenting his fantastical, if hackneyed, New Age visions. Populated with Buddhas, wolves, dragons, skulls, fractals and geometric designs, it resembles a mash-up of 1970s blacklight posters with 1990s rave fliers, wrapped up in a thin blanket of vague Eastern mysticism. One work featured a woman’s head surrounded by symbols from several religions, like an over-earnest “Coexist” bumper sticker come to life.

During a preview Friday, a man in a nubby knit cap walked through waving an incense burner, filling the air with palo santo smoke as a soundtrack of downtempo EDM played in the background. Another dome highlighted virtual reality from Jones’ company Microdose VR, the only truly interactive element of Wisdome.

The centerpiece of the installation is Jones’ short animated film “Samskara,” which is apparently based on ancient Vedic and Sanskrit texts. “Join us on this journey through consciousness and beyond the mind to discover the inner self,” read a description from a screening in October, “from creation, through evolution, corruption, conflict and destruction, to eventual rebirth, and a path to enlightenment.”

The film’s aesthetic recalls a cross between “Tron” and James Cameron’s “Avatar,” as panoramas of lush CGI forests dissolved into kaleidoscopic abstractions. The images began as drawings on Jones’ Wacom tablet before they’re outsourced to digital animation teams in Thailand and Russia.

Lying under the 90-foot dome as the trippy scenes unfold overhead, you can’t help but be somewhat mesmerized, but that has more to do with appealing technology than amazing content. Virtually anything can seem impressive when projected in the enveloping dome. Like a carnival ride, it was entertaining perhaps but far from enlightening.

Wisdome’s organizers said “Samskara” would run for a few months, however the larger project would remain on the site for two to three years, hosting rotating exhibitions and events. “We’re hoping to revitalize the Arts District,” said Sean Ahearn, the vice president of business development for Fulldome Pro, the company behind Wisdome, who adds that it has the mayor’s support. That seemed like a strange comment considering the number of arts spaces already in the area, including mega-gallery Hauser & Wirth and the year-old Institute for Contemporary Art, Los Angeles. It is true that gentrification has largely pushed out working artists from what was a gritty, neglected patch of DTLA, but is a techno theme park really the answer?

It is telling that the Fulldome Pro’s domes have been featured at festivals such as Coachella, Burning Man and Lightning in a Bottle in the Central Coast area — events that last only for a few days and have a captive audience.

Here the company has tried to re-create the festival setting on a small (and urban) scale, with fire pits and trucks selling organic coffee and vegan jackfruit tacos. Wisdome plans to host events throughout the run, including meditations, a Deepak Chopra talk and “Beyond the Wall,” a Pink Floyd-related performance with the band’s saxophonist.

Tickets start at $25, cheaper than admission to less technically ambitious ventures such as the cloying pop-up Happy Place. But the Broad, ICA LA and Hauser & Wirth are all free.

Michael Hope, who manages the property Wisdome sits on, was quick to distinguish the project from other selfie factories. “Everytime there's a new experience,” he said. “You walk through it once and you walk through again, you're going to see a different thing.” Which is certainly true, but that doesn’t much matter if those different things are not worth seeing in the first place.